This sample nursing PowerPoint was written by one of our expert writers, to give you a taste of the work we produce. 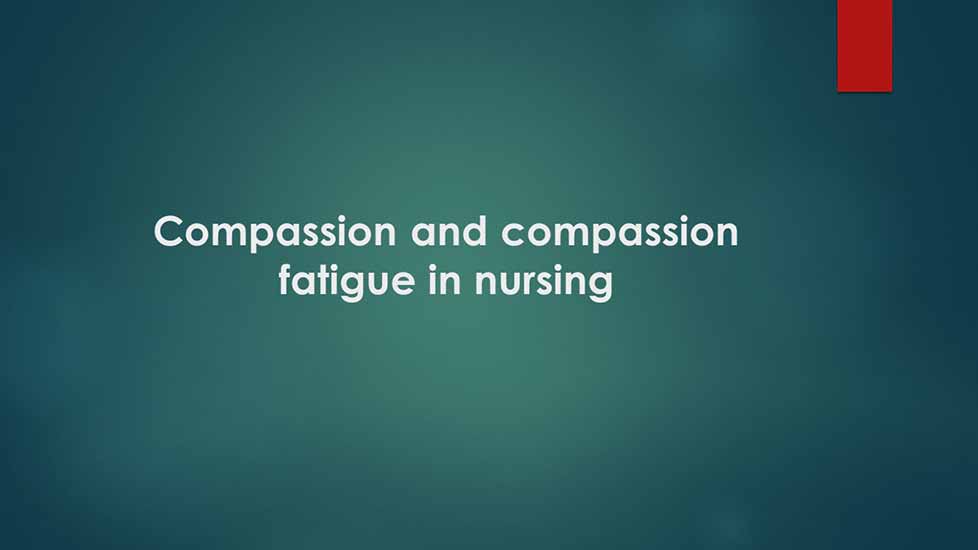 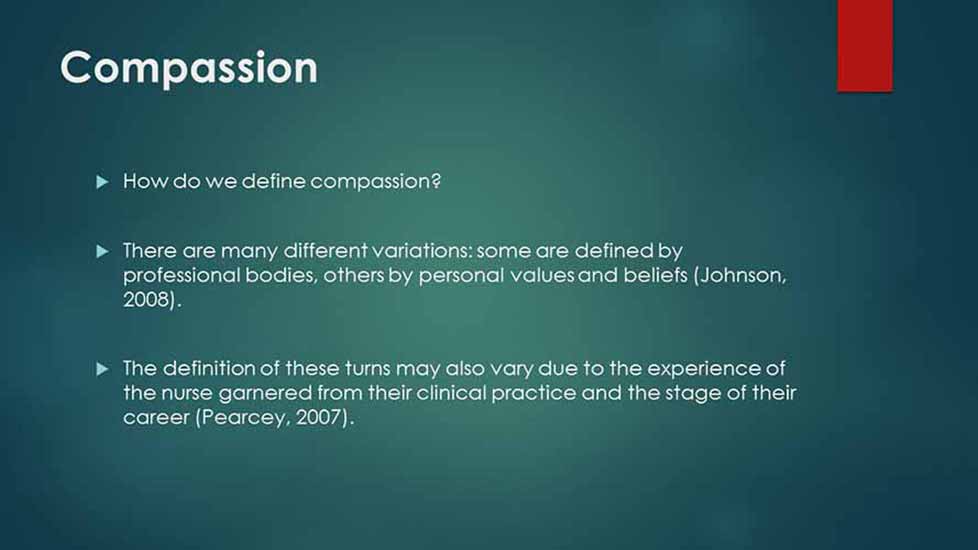 Compassion and compassionate care is a key pillar of nursing and is expected of nurses by their employers, the Nursing and Midwifery Council, and the public (NMC, 2008). It involves interacting and being close to patients, recognising them to be more than medical conditions and procedures (NMC, 2008). One of the major difficulties when discussing compassion is defining what it is. (Johnson, 2008). Each person will have their own subjective definition which will fit with each individual world view but may make little sense in the eyes of others (Johnson, 2008).

There may be debate over the precise definition of compassion because words such as caring, sympathy, empathy, and compassion are used with little discrimination between their respective meanings (Schantz 2007). The definition of these turns may also vary due to the experience of the nurse garnered from their clinical practice and the stage of their career (Schantz, 2007). Student nurses consider compassion to include doing “little things” for patients and that doing these things was demonstration of a caring approach (Pearcey, 2007). It was established as a student nurse that compassion also has a functional component, as well as being a personal attribute (Pearcey, 2007). 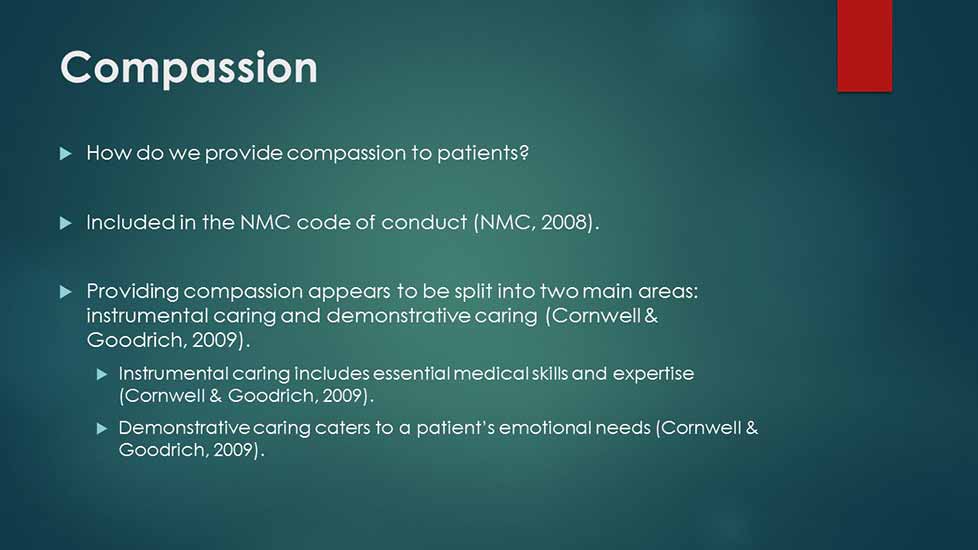 From reviewing the literature there appear to be two main elements involved when providing care: instrumental caring, which includes essential medical skills and expertise, and demonstrative caring which caters to the emotional aspects of the relationship (Cornwell & Goodrich, 2009). Demonstrative caring transforms nursing actions into caring (Proctor, 2000). This could help to explain why some nurses are technically competent, but do not seem outwardly compassionate (Proctor, 2000). Others such as Roach (2002) have argued that compassion in addition to the other core Cs of nursing (competence, confidence, commitment, conscience, and comportment). If nurses are to truly provide care for their patients this must also include compassion, otherwise the care that the patient receives will be incomplete and lacking (Roach, 2002). 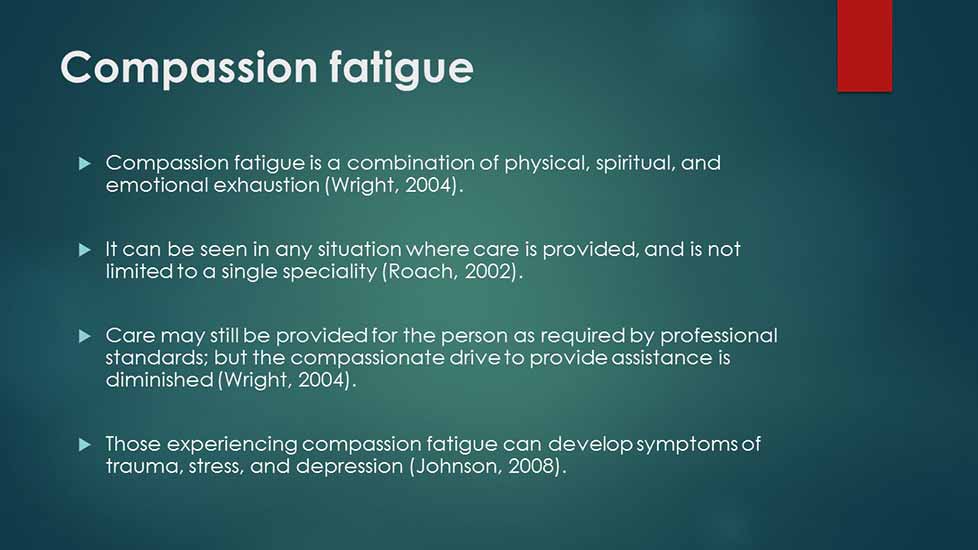 Compassion fatigue is a combination of physical, spiritual, and emotional exhaustion (Wright, 2004). It has previously been associated when caring for patients in extreme distress (emotional or physical); however this has since taken into account that this burnout can affect any individual in a caregiving role (Johnson, 2008). This fatigue can impact nurses in any speciality although it is best documented amongst those working in oncology, first responders, and emergency room workers (Johnson, 2008).

Between 15% and 90% of all healthcare workers develop compassion fatigue (Wright, 2004). Informal caregivers for dependent people have also been well-documented to experience compassion fatigue, which is as a result of the taxing nature of showing compassion for someone whose pain is ongoing and cannot be resolved (Schantz, 2007). Care may still be provided for the person as required by professional standards; but the compassionate drive to provide assistance is diminished (Schantz, 2007). It can also be seen in those involved in long-term healthcare who have family members who are receiving care, and can develop symptoms of trauma, stress, and depression (Schantz, 2007).

This phenomenon is also commonly seen in mental health professionals, especially when they have contact with those who have experienced massive trauma (Fenton & Mitchell, 2002). Those who provided clinical services to victims of hurricane Katrina found that rates of negative psychological symptoms increased amongst the professionals (Black, 2012). Of those surveyed for the study 42% felt an increase in their own vulnerability, 62% felt that they had become more suspicious of the world around them, and 72 reported increased levels of anxiety (Black, 2012). 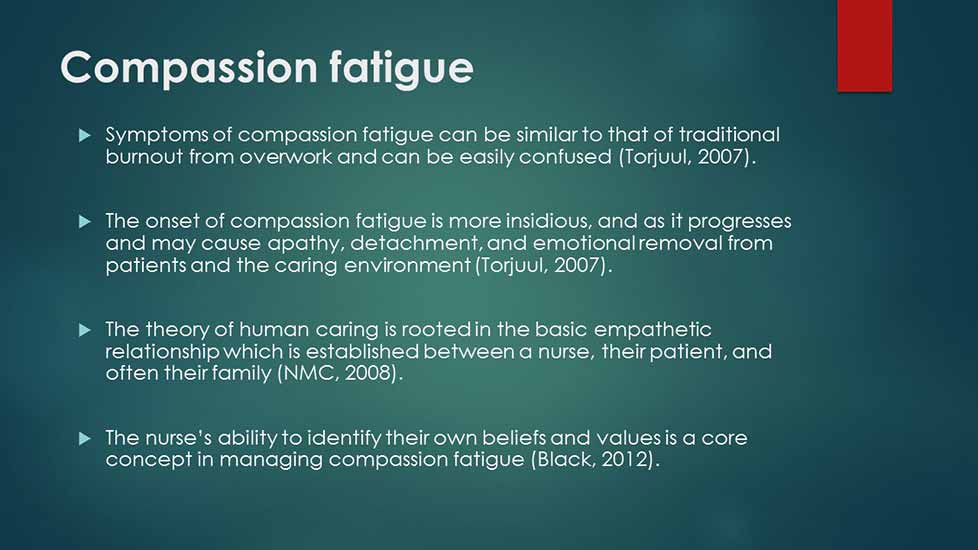 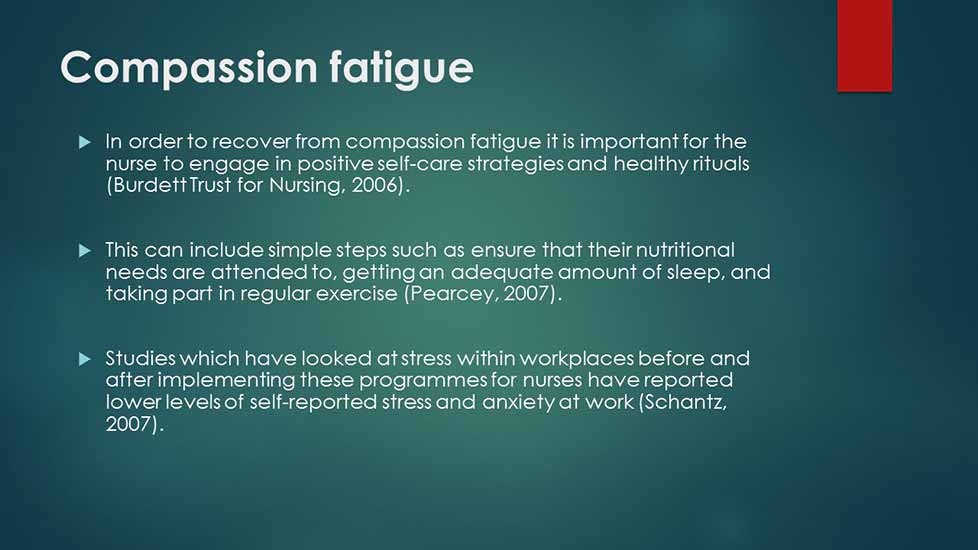 In order to recover from compassion fatigue it is important for the nurse to engage in positive self-care strategies and healthy rituals (Burdett Trust for Nursing, 2006). Healthy rituals can be any activity which is engaged in on a regular basis and that restore personal energy reserves and increase feelings of well-being (Burdett Trust for Nursing, 2006). It is well-documented that as nurses work to meet the needs of others, they often neglect their own needs (Burdett Trust for Nursing, 2006). In order for a nurse fulfil their own needs it is important that they identify ways to restore their own physical and emotional well-being (Pearcey, 2007). This can include simple steps such as ensure that their nutritional needs are attended to, getting an adequate amount of sleep, and taking part in regular exercise (Pearcey, 2007). These steps are now often widely encouraged in the workplace, and many offer introductory courses to self-care routines such as mindfulness, relaxation, yoga, or counselling services (Pearcey, 2007). Studies which have looked at stress within workplaces before and after implementing these programmes for nurses have reported lower levels of self-reported stress and anxiety at work, and have found that staff who have attended such sessions have subsequently recommended that other members of their team also attend (Schantz, 2007). 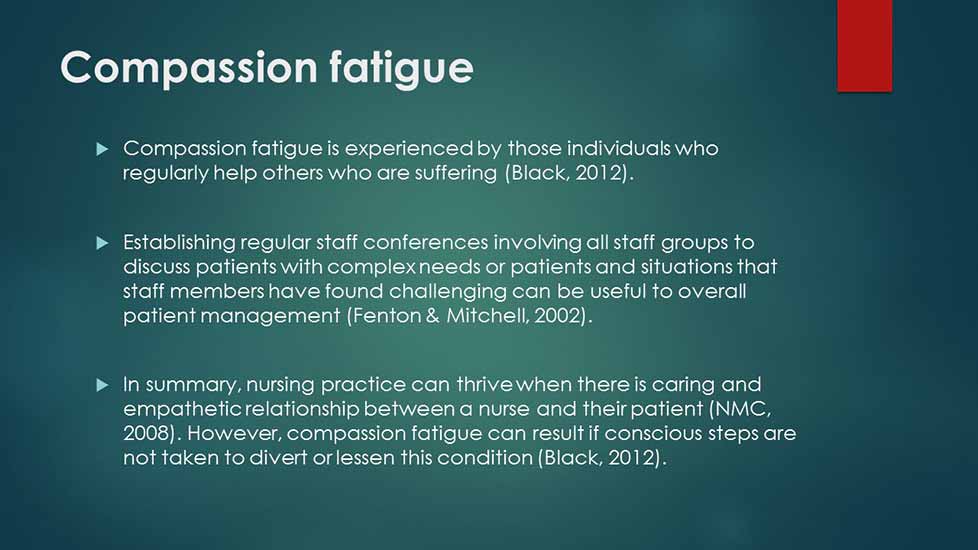 Compassion fatigue is experienced by those individuals who regularly help others who are suffering (Black, 2012). Nurses can become exhausted through their efforts to empathize and show compassion, particularly in situations where they are caring for multiple complex patients or patients who are in a terminal phase of their illness (Black, 2012). This can result in insufficient self-care and an increase in self-sacrifice behaviours from the carer in the helper role (Corbin, 2008). Compassion fatigue has also been described as similar to post-traumatic stress (Schantz, 2007); but the carer does not experience a traumatic event in the traditional understanding; rather the emotional trauma comes from caring for the patient (Black, 2012).

Establishing regular staff conferences involving all staff groups to discuss patients with complex needs or patients and situations that staff members have found challenging can be useful to discuss the physical requirements of patients and can include aspects such as pain management, behavioural difficulties, family interactions and the impact of the patient’s health on family dynamics, and particular stressors associated with this patient’s care (Fenton & Mitchell, 2002). In addition to addressing the needs of the patient, these meetings can be a useful forum to allow staff to discuss their concerns in a collaborative environment where potential solutions can be discussed (Fenton & Mitchell, 2002). In summary, nursing practice can thrive when there is a caring and empathetic relationship between a nurse and their patient (NMC, 2008). However, compassion fatigue can result if conscious steps are not taken to divert or lessen this condition (Black, 2012). 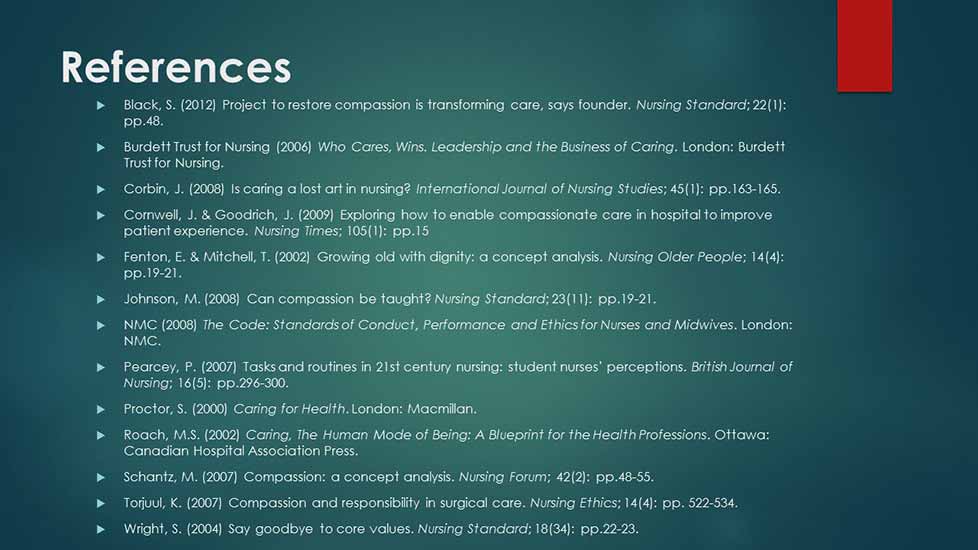