Asthma is the most frequently diagnosed respiratory disease in adults, affecting approximately 8% of the working adult population (Cartier and Sastre, 2011). In the United Kingdom (UK), an estimated 4.3 million adults are being treated for asthma alone (Kaufman, 2012). Asthma has a considerable impact on the quality of life of those affected by it, as well as their families; chronic asthma symptoms cause substantial morbidity, with poor control resulting in an increased rate of admissions to hospital (Rees, 2010). Whilst the morbidity associated with asthma in significant, mortality rates from asthma have reduced in recent decades; despite this, more than a thousand individuals still died from severe asthma in 2012 (British Lung Foundation, 2016). Unfortunately, the number of deaths from asthma reported in the UK is amid the highest in Europe: comparisons of international death rates for 5- to 34-year-olds during 2001-2010 reveal that asthma mortality in the UK is one of the highest in Europe, and is akin to those in the USA, Australia and New Zealand (Royal College of Physicians, 2015).

It is widely noted within the literature that there is no conclusive ‘gold standard’ definition of asthma (Kaufman, 2011). The World Health Organization (WHO) (2010) proposes that asthma is an inflammatory condition which is characterised by repeated episodes of breathlessness and wheezing: these episodes vary on a day-to-day basis, and in seriousness. Killeen and Skora (2013, p.11), however, define asthma as ‘a chronic inflammatory disorder that is characterized by 3 distinct responses: pulmonary inflammation, airway hyperresponsiveness, and airway remodeling in response to a host of triggers that affect only those who are predisposed to the disease’. Linzer (2007) suggests that asthma can simply be defined as recurrent reversible bronchospasm due to a trigger. Busse et al. (2006), however, assert that asthma is a complicated disease that can involve possible permanent airway obstruction, airway hyperresponsiveness, and multicellular inflammation. Recruitment and activation of immune cells, such as mast cells, macrophages, dendritic cells, neutrophils, eosinophils, and T lymphocytes, results in an inflammatory and cellular infiltration into the airways. In particular, Type 2 T-helper cells (Th2) appear to play a significant role in the activation of the immune cascade which results in the underlying inflammation, and can lead to the late asthmatic response; this can be seen in Figure 1 below (Durham et al., 2000). This leads to the release of several pre-formed and generated mediators, resulting in airway remodeling with deposition of extracellular proteins, smooth muscle hypertrophy, and increased goblet cell production (Holgate et al., 2000). As a result of these mechanisms, the airway epithelium becomes fragile and denuded, and the epithelial sub-basement membranes thicken, with increased mucus production and consistency and endothelial leakage leading to mucosal oedema (Linzer, 2007). In addition, mediator-induced abnormalities in the parasympathetic and non-adrenergic non-cholinergic nervous systems can result in increased bronchial hyperresponsiveness. 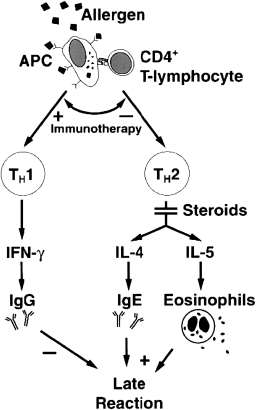 Fig 1. The mechanism of allergen-induced late asthmatic response as a consequence of TH2-type T-lymphocyte activation (reproduced with permission from Durham et al., 2000, p.S225).

As a result of the pathophysiology discussed above, asthma presents with several different clinical symptoms. These symptoms include wheeze, breathlessness, chest tightness, cough (particularly at night), and variable airflow obstruction (Kaufman, 2012).

Assessment and diagnosis of asthma

It is essential to take a structured patient history to confirm a possible diagnosis of asthma, as well as to exclude other alternative diagnoses (Celli et al., 2004). Common alternative diagnoses for asthma include foreign body obstruction, chronic obstructive pulmonary disease (COPD), pulmonary embolism (PE), pneumothorax, and cardiac dysfunction (British Medical Journal, 2016). It is important to be aware that the onset of respiratory symptoms after the age of 40 years favours a diagnosis of COPD, rather than asthma (Tarasidis and Wilson, 2015).

To accurately establish what respiratory symptoms the patient is experiencing, and to rule out possible alternate diagnoses, it is essential to establish the following from the patient:

Get Help With Your Exam Answer

If you need assistance with writing your exam answer, our professional Exam Revision Service is here to help!

Before a diagnosis of asthma can be confirmed, it is also necessary to have a physical examination performed. This should be undertaken using a systems-review approach, focusing on the respiratory system (Baid, 2006; Moore, 2007). Clinical investigations should also be performed, where necessary. Spirometry is the investigation of choice for identification of airflow obstruction and is widely available, including in primary care, although training is required to obtain reliable recordings and to interpret the results. Undertaken correctly, it is most effective way of identifying variable air flow obstruction and making a definitive diagnosis of asthma (British Thoracic Society [BTS]/Scottish Intercollegiate Guidelines Network [SIGN], 2016). Spirometry to measure forced vital capacity (FVC) and forced expiratory volume in 1 second (FEV1) is conducted to differentiate between obstructive and restrictive lung disease. Obstruction of air flow with reversibility is positive for a diagnosis of asthma (Bostock-Cox, 2010). The BTS/SIGN (2016) diagnostic algorithm for asthma diagnosis is shown in Figure 2 below. 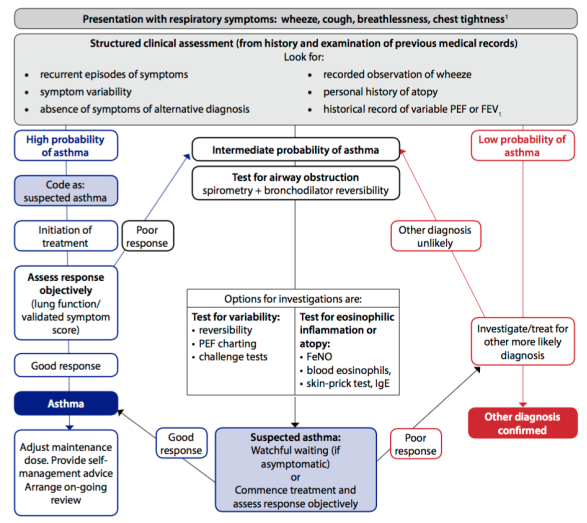 Management of asthma in the adult patient

The BTS/SIGN (2016) guidance ‘British Guideline on the management of asthma’ advocates a stepwise approach to the treatment of asthma, depending on the severity of the symptoms experienced by the patient. This can be seen in Figure 3. 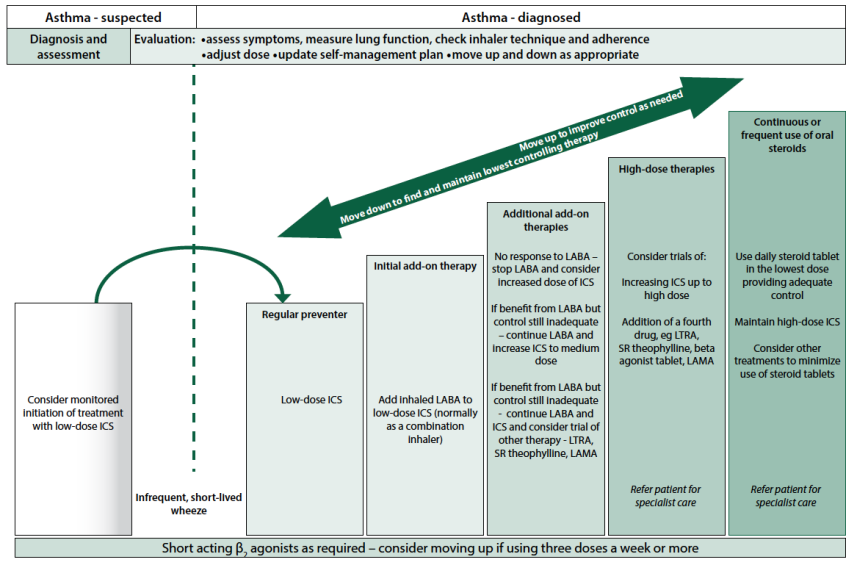 Fig 3. Summary of management of asthma in adults (reproduced with permission from BTS/SIGN, 2016, p.78).

In an adult newly diagnosed with mild to moderate asthma, the patient should be commenced on a low-dose inhaled corticosteroid (ICS) and a short-acting -agonist (SABA) to reduce and, where possible, prevent their symptoms. The BTS/SIGN (2016) regard ICS, such as beclomethasone or fluticasone, to be the most effective preventer drug for adults with asthma. Via mechanisms such as activation or the repression of target genes involved in the inflammatory process, ICS inhalers act to reduce swelling and irritation in the lungs. However, the anti-inflammatory effects of ICS often take several hours to occur, because of the genomic mechanisms involved in their action on the body (Horvath and Wanner, 2006). As such, the use of a SABA for immediate relief of symptoms is also advocated (BTS/SIGN, 2016). Salbutamol is one such dug which relaxes the smooth muscle cells in the walls of the airways; this occurs when the beta2 agonist binds to the beta2 adrenoreceptor, stimulating the production of cyclic adenosine monophosphate (cAMP), providing immediate symptomatic relief (Scullion and Holmes, 2010). If the patient’s condition does not improve using these therapies, then additional inhaled bronchodilators can be used, in a step wise approach (Figure 3).

In addition to pharmacological therapies to manage asthma, there is a large body of evidence which supports that notion that self-management education improves health outcomes for people with asthma (BTS/SIGN, 2016). Self-management is considered to be the tasks that patients must undertake to live with long-term conditions: these include having the confidence to deal with medical management, role management, and the emotional management of their conditions (Institute of Medicine of the National Academies, 2004). In the context of asthma, self-management comes in the form of personalised asthma action plans (PAAPs), which not only consider the medical aspects of living with the disease, but also the broader challenges of living with asthma. According to Newell et al. (2015), people with asthma are four times more likely to have an asthma attack requiring emergency hospital treatment if they do not have a PAAP. The aim of creating a PAAP is to help patients with asthma gain better understanding and control of their asthma via:

Cartier, A., Sastre, J., (2011). Clinical assessment of occupational asthma and its differential diagnosis. Immunology and Allergy Clinics of North America, 31(4), 717-728.

Delivered on-time or your money back

Give yourself the academic edge today

Find out more about our Exam Revision Service

Find out more about our press coverage