Assessment of Dental caries experience, Periodontal Status and Oral Mucosal Lesions among HIV seropositives with and without Anti-Retroviral Therapy (ART): A Cross-sectional study

To assess the dental caries experience, Periodontal Status and oral mucosal lesions among patients with and without Anti-Retroviral Therapy (ART).

A rehabilitative centre for HIV/AIDS.

Individuals with HIV/AIDS above the age group of 15 years.

Dental caries experience, Periodontal Status and Oral Mucosal Lesions among individuals with and without ART.

The results shows that 15.4% of the individuals were males, 84.6% of them were females, and 86.2% were on ART. There was no significant difference in the DMFT score among subjects with and without ART (Median=3). According to Community Periodontal Index of Treatment Needs (CPITN), Calculus was seen in 42.9% and 55.6% of the subjects with and without ART respectively. However Fisher’s Exact test did not show statistically significant difference between them (‘p’ value = 0.2).

The study concludes that the subjects with and without ART did not show any difference in the prevalence of dental caries or periodontal status. Hyperpigmentation was the common condition found among subjects with ART and Geographic tongue among those without ART. However, further follow up studies are required to gain insight to the long term use of ART on oral tissues.

HIV a disease of Immunosuppression has affected millions. India has the largest number of people living with HIV outside of South Africa (Sontakke et al, 2011). There is adequate research regarding the frequency of oral manifestations among them, but are controversial. This may be due to differences in prescribed medications, stages of disease and way of transmission, inadequate diet due to presence of oral lesions (Aleixo et al, 2010; Davoodi et al, 2010). Awareness regarding the severity of oral lesions might help in improving their quality of life. Hence an attempt is made here to assess the dental caries experience and oral mucosal lesions among patients with and without ART

A Cross Sectional study was conducted for a period of three months among 130 people having HIV/AIDS at a rehabilitative centre, an organization run by a Non Governmental Organization, Mangalore. Before commencement of the study ethical clearance was obtained from Institutional Ethical Committee of A.J. Institute of Dental Sciences, Mangalore, India. Permission was obtained from the administrators of the organization. Subjects above the age group of 15 years, who gave informed consent, were included in the study, based on Convenience sampling.

A benchmark (“Gold Standard”) examiner trained and calibrated the trainee examiner. The Study Proforma included information on Gender, ART Therapy, and Literacy level. Dental caries was assessed using DMFT index, periodontal status was assessed using CPITN index and oral mucosal lesions were assessed according to criteria proposed by the EC-Clearinghouse. Oral Examination was done by a single calibrated examiner and the reliability was found to be 0.86.

Data on ART Therapy was obtained from the administrator of the organization from the medical records and the entire questionnaire was coded in order to maintain confidentiality.

The study shows no significant difference in the dental caries experience of the study subjects with and without Antiretroviral Therapy (‘p’ value =0.946) as shown in Table-2.

HIV/AIDS is a global health problem affecting the immune system. Recognition of some oral manifestations of HIV disease, predicts the severity of immune suppression and disease progression. Majority of the study subjects were females compared to males and the mean age was 34.22 years. However studies conducted in South India have shown a higher number of male subjects when compared to females (Patil et al, 2011).

The median of dental caries among subjects with and without ART was 3.This is similar to study conducted on subjects without HIV /AIDS. This shows that dental caries affects all populations irrespective of their immune status. However Dental caries did not show statistical significant difference among subjects with and without ART. This is in disagreement to a study conducted by Phelan et al., who observed a high prevalence of dental caries among HIV infected women compared to HIV uninfected women (Phelan et al, 2004). In a study conducted among HIV patients in Brazil, it was reported that the DMFT index of the participants was 16.9 (Aleixo et al, 2010). Kasiraj, G.V., reported that a negative correlation existed between CD4 count and DMFT index (Kasiraj, 2012).

No statistical significant difference was registered between the periodontal status of the study subjects with and without ART (p>0.05).This finding is similar to a study conducted by Silvinha S.S Lemos and Choromanska M. But Ranganathan et al., revealed a greater severity and breakdown of periodontal tissues among HIV infected. Kiran K reported a severe periodontal breakdown with 9% of the subjects showing linear gingival erythema and 3.5% of them with necrotizing ulcerative gingivitis. The differences could be due to different indices used to record periodontal status or it shows that immunodeficiency alone does not predispose to periodontal problems (Lemos et al, 2010).

Hyperpigmentation was the most common finding among subjects on ART. According to a study done by Patil, B.A. et al 8.2% of the study subjects had hyperpigmentation and a prevalence of 38% was reported by Bravo, I.M. et al among Venezuelan population (Bravo et al, 2006; Patil et al, 2011). Davoodi, P. et al reported that 42% of the study subjects of Iran had Hyperpigmentation (Davoodi et al, 2010). This could be due to adrenocortical involvement by parasites giving rise to adrenal insufficiency and drugs like Azidothymidine used in ART, which leads to pigmentation (Sontakke et al, 2011). Disregulation of cytokines in HIV infected persons promote an increased release of alpha melanocyte stimulating hormone which may lead to mucosal hyperpigmentation (Masiiwa and Naidoo, 2011). However the presence of Lichen Planus, Herpes Simplex, Candidiasis was relatively low which is in disagreement to other studies (Howell et al, 1996; Sontakke et al, 2011).

Although HIV is a disease causing Immunosuppression, the study results do not show profound difference in dental caries experience, periodontal status and oral mucosal conditions among subjects with and without ART. Hyperpigmentation was the common condition seen among subjects with ART, which could be attributed to medications. There are some limitations in this study as this was conducted among institutionalized subjects representing a small sample where in-house medical and dental care is provided. A control group was not taken as it asks for HIV tests. Study subjects should have been compared according to their CD4 counts instead of those with and without ART.

The study concluded that individuals on ART had a higher prevalence of oral mucosal lesions, and periodontal diseases but it was not statistically significant. There was no statistically significant difference in the dental caries experience among individuals with and without ART. However, further follow up studies with control group is required to gain insight in to oral and perioral manifestations among HIV infected.

The authors are grateful to the participants and the members of Snehasadana and its members for their support and cooperation in conducting the research.

Distribution of Periodontal status among study subjects with and without ART

Distribution of study subjects based on Treatment Needs 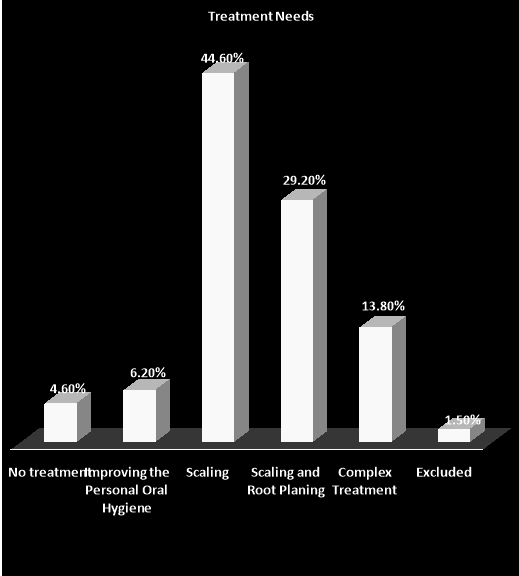 Dentistry, also known as dental medicine and oral medicine, is a branch of medicine that consists of the study, diagnosis, prevention, and treatment of diseases, disorders, and conditions of the oral cavity.

A recent breakthrough in the dental field is the development and successful application of dental implants. Since its appearance, the procedure, due to many advantages, proved itself worthy of further...

A cross sectional study to assess the dental caries experience, Periodontal Status and oral mucosal lesions among patients with and without Anti-Retroviral Therapy (ART)....

Our team has decided to investigate the epidemiology of dental caries in Scottish children, below the age of 16 inclusively from the 1970’s to present. Scotland has the highest prevalence of too...