Processed foods are areal food that has undergone several processes so that it can be kept safe for human consumption or for convenience. It is food that has been infused with chemicals, preservatives, and are then canned, frozen, refrigerated, dehydrated, or have undergone aseptic processing. Most of the processed foods are usually made from saturated fats, huge amounts of sugar, trans-fats, and large amounts of sodium. Due to their convenience, over time they have become very popular because they are usually prepackaged. However, studies have shown that processed foods are a cause for alarm as they are a major contributing factor to many types of cancers and heart problems. This is because their calorie, sodium, and saturated fat content are usually vey high.

Very many adverse health effects are associated with the use of processed foods. Take sugary soft drinks for example, research has shown that soft drinks are a major contributor to weight gain and obesity cases. Due to its sugary and fizzy nature, soft drinks are very tempting and consumers are more likely to opt to taking this drink as opposed to taking water or other non-sugary drinks. According to researchers, consumption of soft drinks is likely to increase chances of a person getting obesity by 1.6 times. Soda has also been known to affect the kidneys. Those with high phosphoric acid content have been known to increase renal colic especially in men. The high phosphoric acid content is most common to all kinds of colas.

Due to their acidic nature, sodas/soft drinks are a contributing factor to dental decay because they tend to dissolve the mineral content of the enamel and therefore teeth become weaker. They have also been known to damage the liver according to and Israeli medical study. This is especially so for the fizzy drinks.

If stored for too long, fizzy drinks can leach aluminum from the cans. Aluminum, which is the main component of the fizzy drinks cans, is responsible for Alzheimer’s disease. Aluminum metal has also been known to cause neurological diseases. Soft drinks are believed to contain high amounts of sugar that causes the pancreas to produce a lot of insulin, which leads to fatigue, sleepiness, and lethargy. Persistent rise and reduction of sugar levels in the blood can cause diabetes due to the imbalance. High soda consumption has also been known to reduce potassium levels in the blood leading to severe fatigue and appetite loss.

Another effect of fizzy drinks is the increased risk of osteoporosis since it increases the risk of impaired calcification of bones. This is a major problem especially in young girls as it increases their risk of developing osteoporosis (increasing the probability of fractures) in the future.

Fizzy drinks contain little or no nutritional value and due to their sweet and fizzy nature, they are often an option for many people and therefore people forego the option of taking healthier choices like water, fruit juice, or milk. Since most of them are diuretics, they are therefore a major cause of dehydration in people and therefore instead of adding water to the body, they squeeze water out of the body.

According to the World Health Organization, processed foods are linked to increased obesity cases in the World. Processed foods usually contain high amounts of fructose that has many negative health effects in the body. They also contain large amounts of salt, which is a major cause of stroke. Consumption of salt over a long period has been associated with hypertension and other heart related problems (Gogus 46).

Processed foods usually contain hydrogenated fats in them. Hydrogenated fats usually take a long time metabolize. They also interfere with the body’s ability to digest the good fats. They also alter the composition of cell membranes. They also contain many additives that have been known to cause a range of diseases.

According to the Food and Drug Administration (FDA) there are over 3,00 chemicals that have known to be used during food processing to add color, preserve, sweeten, soften, emulsify, thicken, add flavor and to achieve other desired effects o processed foods. Some of these additives have however, never been tested for safety. Some of these compounds are known to be toxic to humans and animals though may not be harmful at very minute levels. Side effects vary between chemicals and some products contain a variety of these and it might therefore be hard to determine which chemical has caused which adverse effects unless under comprehensive tests. Companies that deal with processed foods sometimes provide false information as to the ingredients are contained in the foods. They may also at times exaggerate as to the benefits of the processed food in order to make more sales and attract more customers to buy its product (Packard)

During processing of processed foods, natural food is usually subjected to extrusion after which it is treated with oils and sugars to give them taste and texture. By the time they are packed, most of the natural ingredients that were initially contained in the foods have been destroyed. This therefore renders processed foods non-nutritional though they become more appealing.

Processed foods should be highly avoided especially during pregnancies. This is because at this particular time, the unborn baby is very sensitive to the food that the mother is taking. Since it is not a requirement by the FDA to list all ingredients that have been used in processed foods, one might ingest harmful chemicals without their knowledge and these chemicals may end up being harmful to both the mother and the baby. Although at this time the mother’s body may be able to sieve these harmful chemicals from its systems, the unborn baby’s metabolism has not fully developed and therefore may end up being retained in the baby’s body. The mother’s body is however still vulnerable during pregnancy. Since the processed foods contain high amounts of sugar, it may lead to gestational diabetes, weight increase or type 2 diabetes, which usually occurs at around this time. It is therefore advisable for pregnant mothers to go for natural foods so that they can protect their lives and that of their unborn babies (Rountree, & Block 60).

Another risk that is associated with frozen foods is that when food is defrosted, it should not be used then frozen again. This is because it makes it susceptible to invasion by harmful bacteria, which might lead to diseases.

With all its many disadvantages, processed foods do have their benefits. The most advantageous one is that it makes available a variety of food and makes it easier to access the food, as it is available in the supermarkets. It also makes it possible to access the foods that are seasonal all year round for example, fruits and vegetables.

Food processing also helps to improve food safety by various methods e.g. heating food at high temperatures helps to kill harmful bacteria. Some additives are also very effective in preventing the growth of fungus and bacteria on the foods. These bacteria are responsible for a wide range of diseases and therefore processing foods also helps to protect against some diseases that may be found in foods in their natural state. For foods like milk, pasteurization helps to keep it fresh. For milk, pasteurized milk is considered safer for use than fresh milk. Some processed foods are fortified with other minerals and therefore may be used as supplements

Processed foods are usually packaged and this reduces interference of the food. The food is therefore well preserved when packed as compared to when it is not. Packaging also helps to increase convenience when it comes to transporting the food over long distances, as there will be minimal tampering of the foods. Packaged food is also very convenient as it is quick and easy to prepare, as most of the processed foods are usually precooked.

Processed foods also present economic benefits as they are easier to sell and easier to transport. They are also easier to export as compared to fresh foods an therefore companies are able to sell more products both within the domestic markets and also outside the country. It also makes it easier for seller to sell the processed foods at cheaper prices as compared to the fresh foods thus making more sales.

For people with diabetes, controlling their calorie intake is sometimes very hard when taking natural foods. It is therefore easier to control the calorie intake using processed foods as they have specified amount of calories. The same case applies to patients with heart problems.

It is almost virtually impossible in today’s modern lifestyle to live without processed foods. However, the disadvantages outweigh the advantages, it altogether proper to say that the best way to avoid the negative effects of processed foods is to avoid them altogether. Other ways that would significantly reduce these effects would include avoiding giving the processed foods to infants and children. This is because their metabolic systems have not fully developed and may not be able to sieve the toxins that may be found in the processed foods. One should always read the label of the packed food carefully because though a food may be advertised to be low in sugar or salts, it may contain high levels of saturated fats (Nisha 17)

One should also be vey careful as to purchase grains that are not overly refined but whole meal. Expiry dates on the labels should be checked to ensure that the foods are not expired and also that they are not due to expire soon. Though taste is usually a determinant of the foods we buy, one should ensure that they go for quality and not taste. In addition, one should make sure that they buy foods with minimal additives and flavors. Where unavoidable processed foods should therefore be used in moderation.

Food is the most important thing in our lives besides water. Moreover, healthy eating means eating a variety of food that gives you the nutrients you need to maintain your health, feel good, and have energy. These nutrients include protein, carbohydrate, fat, water, vitamin, and minerals. 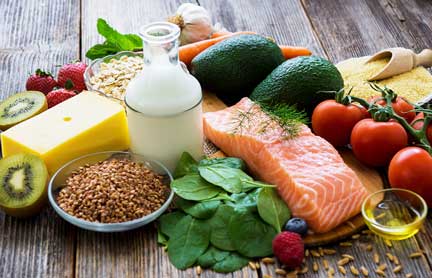 Introduction It is undeniable that pregnancy is one of the toughest periods women go through in their lives. Pregnancy is characterized by hormonal imbalances, which not only affects the moods of wom...

Child Obesity in Canada Immediate Action Needed for a Better Future Executive Summary Obesity is a condition that there is excessive body fat which leads to increased morbidity and mortality. Obesi...

The Important of Healthy Eating

Food is the most important thing in our lives besides water. Moreover, healthy eating means eating a variety of food that gives you the nutrients you need to maintain your health, feel good, and have energy. ...