Introduction
The term “Diabetes” is known widely as a disease which affects people who are overweight; although this disease is a common side effect which comes with being unhealthy, there are many other types of this disease that affect people who have no control over it. Diabetes is a conditon with a group of different sub-conditions where the body cannot regulate blood glucose.

Type one Diabetes symptoms can include Blurry vision, dry mouth, severe thirst, extreme hunger, unintended weight loss, frequent urination, fatigue and weakness, irritability and other mood changes and bed-wetting in children who previously didn’t wet the bed during the night.  This form type of Diabetes is known as an autoimmune form of the disease where the immune system attacks the insulin produced by the pancreas, for this reason, the condition is life long and an individual who has type one needs to take insulin through regular shots or an insulin pump.

The second form of diabetes is type two diabetes, it is the most common and is caused by lifestyle factors and weight gain which causes insulin resistance in the body over time. The prevalence of type two diabetes (based on self-reported data) has tripled between 1989–90 and 2014–15. The proportion of people with diabetes has increased from 1.5% to 4.7%. this trend is only likely to increase due to the ease of access to unhealthy foods and the price of unhealthy food being extremely low compared to buying healthier food. As society is well and truly use to getting what they want instantaneously, the choices Australian society makes is likely to follow that trend into the future.

The History of Diabetes is a long one that goes back around 3000 years when it was first mentioned by the ancient Egyptians. It has been found that they mention a symtoms of the disease we know today as type one diabetes. The symptoms included excessive urination, thirst and weight loss. At the time the writers recommended a diet consisting of whole grains to ease the symptoms. Furthermore in ancient India, people found out that they could use ants to test for diabetes by giving the ants urine. The ants seemed to be attracted to the urine we know now that it is because the urine contained high sugar levels. They called the condition “Madhumeha”, which means honey urine.

The term diabetes came later during the third century B.C.E. when Apollonius ( a Greek philosopher) mentioned the term “diabetes”. This may have been the earliest use of the term. Later in time, Greek physicians would differentiate between diabetes mellitus and diabetes insipidus.

Diabetes insipidus has no link with diabetes mellitus, although the symptoms of thirst and urination are the same, insipidus does not attack the bodies production of insulin. Diabetes insipidus results from a problem with a hormone called vasopressin that the pituitary gland produces.

Approximately in the fifth century, China and India could differentiate type one and type two, they could tell that type two was more common among people that are overweight and wealthy, this indicates to us that at the time people what had more money had more access to food, therefore, ate more and exercised less.

During the middle ages, it was believed that diabetes originated from the kidneys this would have been logical at the time considering that one of the sides effects of diabetes is frequent urination. This theory was later proven wrong in the 18th century by an English doctor who discovered that the disease was frequent among people who had some kind of injury or problem relating to their pancreas.

In 1776, an English doctor named Matthew Dobson became famous for his work on diabetes by publishing an article in the journal Medical Observations and Enquires, in the article Dobson mentions about the fact that people who are affected by diabetes can have sweeter urine than people who don’t carry the disease. He also mentions in his notes that the disease could be fatal in a minority cases but seemed to just be chronic in others, which helped to prove that there was a difference between the two types.

Before the 19th century, there was no record of people living longer than a few weeks to a month once they started showing symptoms, this was caused due to a lack of effective treatments. (Deborah Weatherspoon, 2019)

As shown above, the majority of diabetes is seen within the Type two category, as this is a preventable form of diabetes. As Australian society moves forward into the future these numbers are likely to increase without drastic intervention.

the National diabetes services scheme (NDSS) gives us the information on how many people are affected by diabetes by age group as of 2019 and tells us that the prevalence of diabetes no matter the type affects individuals between the ages of 50-79 years of age the most.

The most common practice used to treat diabetes is insulin therapy, whether it is by using an insulin pump or insulin injections it is what people will usually choose to treat the disease. For people with type one insulin is a hormone that is not produced by their body or in very small quantities due to an autoimmune reaction happening in the body, this means that they need to have daily injections. People affected by type two do produce the hormone but it is not effective this can also be called insulin resistance. In some cases, lifestyles changes can be enough to delay the necessity of insulin use but it is normal for the disease to eventually come to the point of needing injections.

As of September 2016, clinical trails commenced for an “artificial Pancreas” also known as a continuous glucose monitor (CGM). This system measures the blood sugar levels of the wearer every five minutes, a signal is then sent to an insulin pump which the individual wears on their body and they work together to regulate blood sugar levels without the need for injections. As the blood sugar returns to target levels, the insulin dose stops. Currently, in 2019  CGM’s are common practice but not always necessary. (Jia, Zhao, Chen & Zhang, 2018) (McMahon et al., 2019) (Dunstan et al., 2002)

The geographical location of diabetes is widespread throughout Australia. From data collected from the National Diabetes Services Scheme (NDSS) website, which shows a breakdown of diabetes based on type and state. It is shown that type two diabetes has a greater prevalence in dense metropolitan areas, as well as lower socioeconomic areas. This occurs generally because fast food options are cheaper and easier than buying individual items from the shops and cooking them. Healthy options are on average more expensive.

Nowadays, individuals in low socioeconomic areas grow up in a world of connection and information with the ability to order food from a smartphone, the choice is even easier to choose fast food over healthy eating. This allows the rates of type two diabetes to rise.  Based on sources from the NDSS, areas of high socioeconomic status have a significant reduction in the cases of type two diabetes. The question arises as to why that is. Generally speaking, those individuals who live in high socioeconomic areas eat healthier and have the resources and healthcare available to them. People of low socioeconomic/rural areas tend to rent as a pose to buying a house. As these rental houses or flats get smaller the cheaper they get so it can be hard to have the space to prepare and cook healthy meals.

In low socioeconomic areas, the level of knowledge and education regarding healthy eating and the potential for health related illnesses such as diabetes is less well known, these individuals are less likely to see a healthcare professional until the effects of diabetes have hit a critical level. Diabetes isn’t a disease that can be diagnosed from a psychical examination alone so it can be difficult for a person to be aware of the fact they have diabetes. Thanks to the advancements in medicine, the death rate has decreased marginally over the past 10 years from 16.7 to 16.2 deaths per 100,000 people. Prior to 2016, diabetes was consistently the sixth leading cause of death in Australia.

The total national percentage of the population who have registered with the NDSS with type two diabetes in Australia is 1,132,318 people (87%) as compared to the total national percentage of the population with type one diabetes sitting at 119,751 (9%). Over the last 12 months, 106,180 people with diabetes were registered with the NDSS. This equates to 291 new registrants every day, of these new registrants, 165 had type two diabetes, nine had type 1 diabetes and the remaining had either gestational or other diabetes. (NDSS 2019) 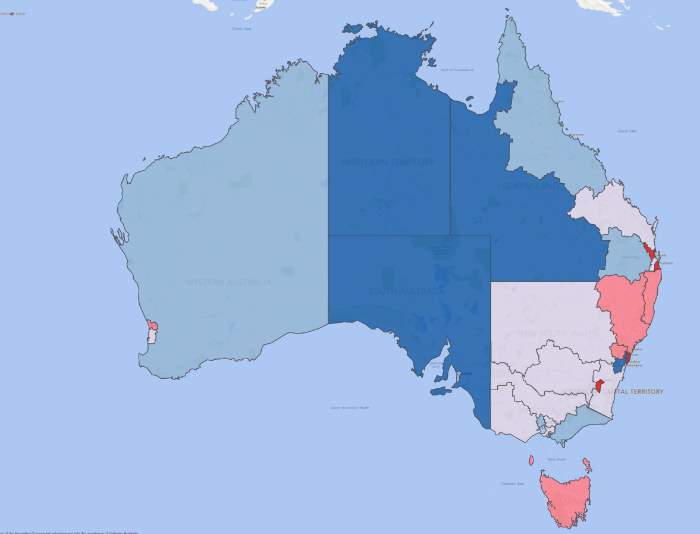 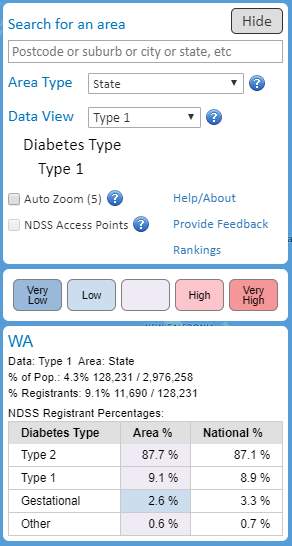 Type 1
As shown by the above map, individuals affected by type 1 diabetes within Western Australia sits a 9.1% registered with the national average sitting at 8.9%. Due to a majority of the nation’s population living in major city’s the scale shows that a high level of individuals with type 1 lives in a metropolitan area. 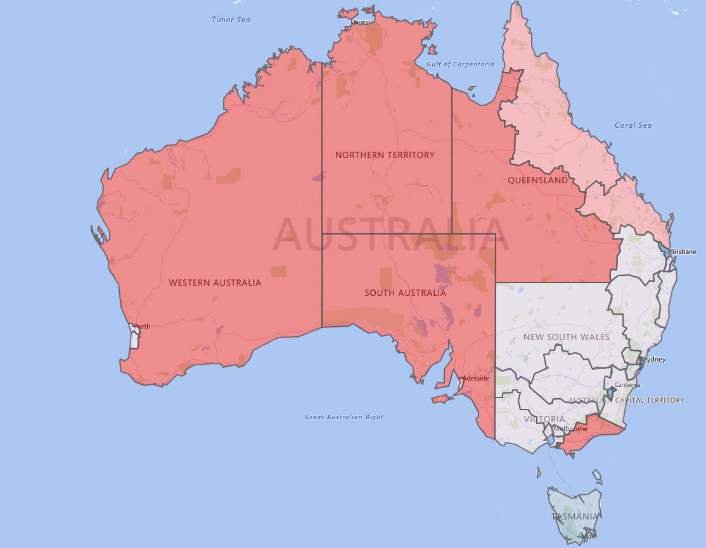 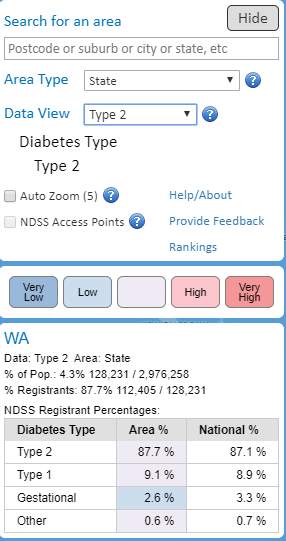 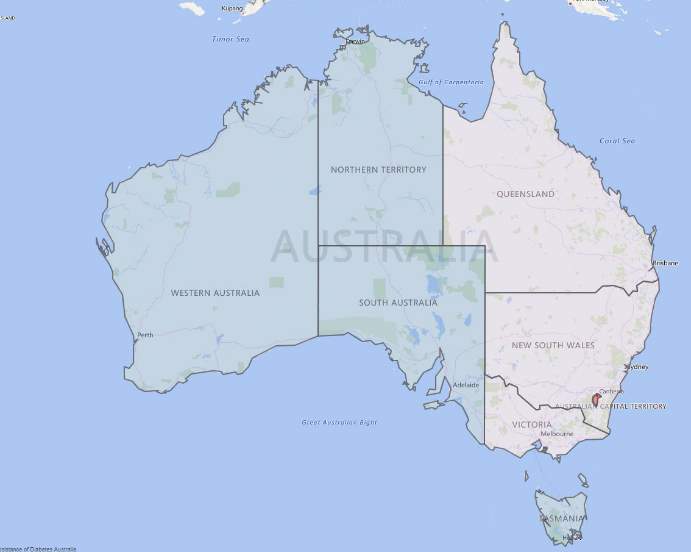 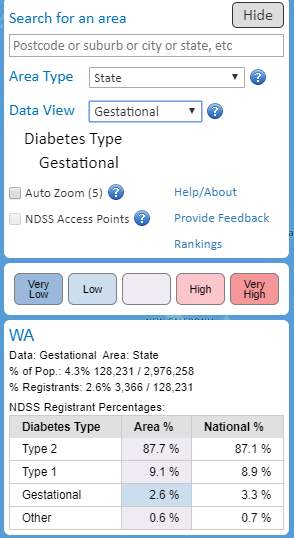 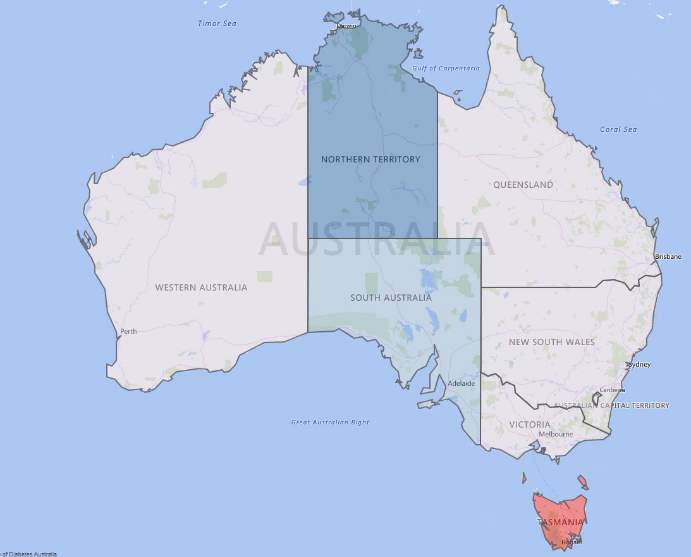 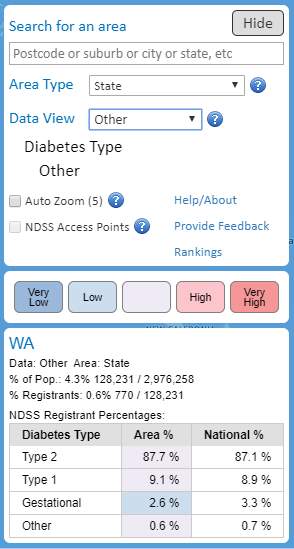 Diabetes was declared as a National Health Priority by the Federal government in 1997, and state and federal governments have supported programs to monitor and improve diabetes prevention, detection and management. Nevertheless, diabetes prevalence is still on the rise indicating the need for more to be done.  Government initiatives such as the National Diabetes Services Scheme (NDSS) which monitors the growth of diabetes in Australia and help with the help of diabetes Australia which is the third oldest diabetes association in the world after the United Kingdom and Portugal.

By 1982 there were six diabetes associations or societies committed to the care of people with diabetes in Australia.

•         Australian Diabetes Educators Association (ADEA) – founded in 1981.
In the following years to come the National Diabetes Services Scheme (NDSS) which first came into operation in 1987 helped the government take control of the diabetes epidemic. The aim of the NDSS is to enhance the capacity of people with diabetes to understands and self-manage their condition. Diabetes Australia also seeks to support people with diabetes by providing timely, reliable and affordable access to NDSS services. Registration with NDSS is free and open to all Australians who are diagnosed with diabetes. In order to register the following must apply.

In conclusion, Diabetes affects millions of Australians every year, by current figures, if the prevalence of diabetes continues at the rate it is one in ten people world wide will have diabetes by 2040. Although there hasn’t been a cure found yet, strides are being made towards a cure every year with better and better ways to manage diabetes. Government iniatives such as the National Diabetes Subisity Scheme (NDSS) which has helped to aid the issue with diabetes in Australia by ensuring patients with diabetes are managed appropriately. From a more fundermental point of view, education about food, diet and health should be renforced from the primary age in order to steer the next generation towards a healthier future.