Neisseria gonorrhoeae is a gram-negative diplococci bacterium that is a major cause of morbidity among sexually-active individuals worldwide. It is one of the most common bacterial sexually transmitted infections that manifest primarily as urethritis in males and endocervicitis in females.

Severe complications can occur in untreated symptomatic and asymptomatic infected individuals such as epididymitis, prostatitis in males while; pelvic inflammatory disease (PID); infertility can occur in females (Weston et al., 2018).There has been a recent rise in cases due to a combination of behavioural, biological, and cultural influences in people under 25 (Cuffe et al., 2016). As a result, 77 countries have shown cases of multi-drug-resistant Neisseria gonorrhoeae, with cases in the UK displaying resistance high-level resistance to ceftriaxone and azithromycin, two commonly prescribed drugs (ECDC, 7 May 2018).

Though Zoliflodacin has shown promise, it will still take years before coming to the market, therefore early diagnosis and treatment of infected individuals is required to prevent severe sequelae and spread of this disease as well as screening patients in high risk areas. (Taylor et al., 2018)

Culture tests have been the gold standard to confirm diagnoses, being regularly performed to diagnose gonococcal infections, however with the 2-day incubation and multiple variables affecting test results, further confirmatory tests are required. Nucleic Acid Amplification tests (NAAT) such as Polymerase Chain Reaction (PCR) have been found to be highly sensitive and specific methods for detection of N. gonorrhoeae for both swabs and urine. They have steadily become the front-line test for screening patients with many STI clinics across the UK. However, NAAT has found to cause misdiagnosis of samples due to inhibition of genetic target genes. (Ng, 2005)

Since the 1980s, Culture is seen as the gold standard for the diagnosis of gonococcal infections. It provides the optimum environment to grow the fastidious bacterium, by using highly nutritious media that contains high concentrations of essential purines and pyrimidines to act as energy sources. To improve gonococci identification selective culture medium such as modified Thayer-Martin and New York City, which use antibiotics such as vancomycin; colistin; nystatin and trimethoprim to isolate Gonococci and remove commensals. (Lenoc and Chastel, 1970) (Shipitsyna et al., 2010)

However, Kulkarni, Bala and Risbud 2015 shows that certain strains of the bacterium are inhibited by supplements which can lead to false positive results, therefore they should be grown on media with lower concentrations of antibiotic (Kulkarni et al., 2015). This presents the need to have in place quality assessment programs to define the rates of different gonococcal strains on selective media to ensure minimal discrepancies between pathology labs. Schink and Keith 1985identified the fastidious nature of the bacterium affected the sensitivity of culture, causing it to vary from 72% to 95%, however it should be noted that sample site and patient population is a possible cause for this variation. (Schink and Keith, 1985)

Gram stain is another test that is performed on the sample obtained from a swab of either the urethra, cervix, vagina or rectum.  Under oil immersion urethral smears from symptomatic males usually contain intracellular gram-negative diplococci in polymorphonuclear leukocytes, this can provide a presumptive diagnosis. However, endocervical smears from females or rectal specimens are more difficult to interpret due to the presence of other Gram-negative coccobacilli, such as Moraxella osloensis. Microscopy of urethral smears have a high sensitivity and specificity compared to endocervical smears which have 50% specificity to 70% sensitivity. The reliability of test will also depend on the quality of the sample and the microbiologists experience. (Lenoc and Chastel, 1970) (Shipitsyna et al., 2010)

With the lack of reliability of microscopy and culture, further supplementary tests need to be performed to provide a definitive diagnosis. Biochemical tests are commonly used to differentiate between other Neisseria species and other commensals found in the urogenital area, based on the abilities to ferment selective sugars (Miller, 2006). In addition, fluorescent antibody testing using sothiocyanate-labelled monoclonal antibodies that binds specifically to both protein IA and IB (porins, or outer membrane proteins), giving apple-green fluorescent staining to confirm diagnosis(Klanica and Stejskalova, 1976). Many reports say this has 100% specificity, however reports of unrelated organisms such as Staphylococcus aureus being observed in positive indicating results (Ehret JM, 1991). There are also other non-specific tests such as chrome Chromogenic enzyme substrate tests, DNase and nitrate reduction.

These tests provide an accurate diagnosis of the gonococcal infections, however Whiley 2006 showed these tests are unable to detect the asymptotic patients who are which show a significant decline in diagnosis. (Whiley, 2006)

NAAT is a highly specific and rapid test that detects either bacterial DNA or rRNA. This can be especially significant in detecting N. gonorrhoeae in specimens that may not contain viable organisms’ due to long transportation time and exposure to extreme temperature conditions. NAAT has been proven to detect the bacterium in asymptomatic patients and can be used in urethral, cervical specimens and urine specimens which has steadily being used in laboratories across the UK, which is supported by Figure 1. However, the primer used and the presence of inhibitory substances within the specimen can affect the sensitivity and specificity, giving rise to false-positives.

In terms of using DNA compared to rRNA in NAAT, a recent study from Liang et al. 2018 performed an experiment between rRNA-based on simultaneous amplification and DNA-based quantitative real-time PCR.  None were found to be positive in the using DNA, while 46.15% were found positive in the using rRNA showing a higher sensitivity using rRNA. However only 32 swabs of Neisseria were tested, revealing a lack of variability in results. 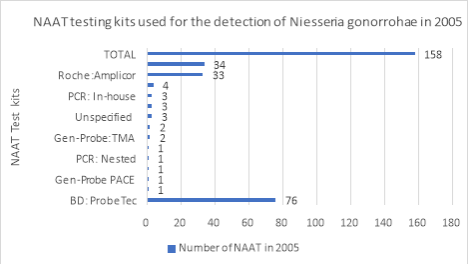 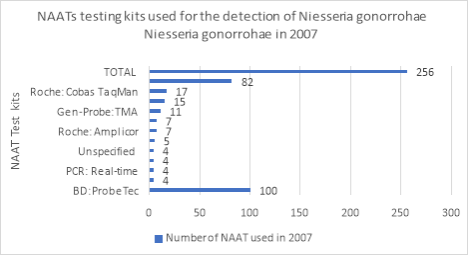 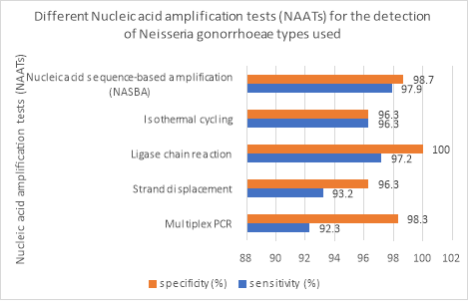 Figure 1a and 1b show the number of NAAT kits used performed in 2007 and 2005 for the detection of Neisseria gonorrhoea. In 2007, 98 more laboratories performed NAAT tests while BD: ProbeTec remained as the most used NAAT in 2005 and 2007. Figure 2 represents the different NAAT types with their sensitivities and specificities. This information is adapted from Whiley et al, 2006 for SDA  is based on the ProbeTec SDA assay, O’Niel et al, 2011  with APTIMA Combo 2 and BD ProbeTec for isothermal cycling, Ligase chain reaction is based on (Ng, 2005), NASBA is based on (Mahony et al., 2001).Real time PCR is another test performed can be seen in table 1 and 2 but not table 3 because the the sensitivity and specificity will vary depending on depending on the target gene.  The results on table 3 will also vary based on, probes used and operator, the results and manufacturer.

Culture is a gold standard microbiology test used in laboratories and is the same for the diagnosis of gonococcal infections however the recent paper from (Budkaew, 1 Sep. 2017) compared culture techniques against real-time PCR. Their findings had found high accuracy for positive gonococcal infection by real-time PCR, whereas none were detected as positive by conventional culture showing a significant difference in sensitivity. However, this source is not reliable as many of the factors that were identified in other studies associated with increased (or decreased) risk of urethral gonococcal infections in our population could not be demonstrated by the paper. There were also no confirmatory tests performed for both sets of results and there is the possibility of false-positive results due to cross-reactions, which is further explored by McNally et al (McNally et al., 2008).

(Tabrizi SN, 2011) compared six PCR assays available on the market using 216 N. gonorrhoeae isolates and 234 isolates of non-gonococcal Neisseria species and 16 isolates of other closely related bacteria. This paper highlighted the high sensitivity and specificity of PCR, but also the issue of false-positive results due to cross-reactions, particular the COBAS Amplicor and ProbeTec which are two frequently used assay, implying an issue with currently utilised testing procedures. (Upton et al., 2013), supports this is as it tested Roche cobas 4800 CT/NG Assay, which was suggested to not need a confirmatory test for diagnosing patients. The study shows an example of a false-positive result obtained from a pharyngeal swab sample al, supports the weakness and the need for EQA as the study looked at the porA gene which caused false-negative results in molecular diagnostic assays targeting the gonococcal porA pseudogene. From and caused by a reproducible cross-reaction with a commensal Neisseria strain. In addition to Luijt et the testing of 286 laboratories worldwide, 9% of these laboratories incorrectly reported the result of sample which was highly significant with the association between reporting use of the porA pseudogene as target gene and reporting negative results in the N. gonorrhoeae molecular diagnostics from their result. (Luijt et al., 2014) In contrast Kellog et al, further supports that PCR is a more specific test to conventional culture, microscopy and biochemical tests with a 30% higher sensitivity found when diagnosing 3,023 specimens from non-selected patients. The journal highlighted the weakness of culture in growing non-genital specimens and further supports the fact of PCR to become the front-line test in screening patient care. (Kellogg et al., 2004)

UK NEQAS have looked at developing molecular schemes to maintain an accurate diagnosis of laboratories in gonocooal infections. The aim of the new scheme is to determine whether the 16 sRNA will remain stable over a period of 6 weeks and the impact of different storage temperatures on sample. RNA will be extracted from a bulk of simulated urine over 6 weeks, that will be then detected and monitored using a in-house RT-PCR. The extracted RNA will be placed at 32°C, room temperature, -4°C, -20°C during those 6 weeks to see if there is an impact of storage on the stability and detection of the 16 sRNA. Based on previous studies I hypothesize that the 16S RNA sample will remain stable over a period of 6 weeks, maintaining a moderate level of detection within the stimulated sample provided that the samples are kept at -4°C degrees and below.

This student written literature review is published as an example. See How to Write a Literature Review on our sister site UKDiss.com for a writing guide.