Exposure to carbon disulfide (CS2) and associated sulfide compounds was found through this research to increase the potential for interference in normal glucose metabolism and development of retinal microaneurysms. CS2 and sulfide compounds were found to be associated with and present in emissions from extraction and processing of natural gas. Natural gas occupational workers may be exposed to CS2 and sulfide compounds leading to increased potential for glucose metabolism interference, which has been an indicator for diabetogenic effect and increased incidence for retinal disease. Residential communities exposed to CS2 in emissions from natural gas extraction and processing may experience a similar increase in gluconoronic and retinopathy diseases.

The review of literature was conducted as an evaluative assessment and focused on the potential diabetogenic effects from CS2 exposure to occupational workers. (A meta-analysis was performed and found a strong association in viscose rayon occupational workers exposed to CS2 and an increased potential for alteration of glucose metabolism and retinal microaneurysms. The search criteria were inclusive to all papers on occupational health effects of CS2 exposure. Relevant articles were identified by a systematic search of Medline, TOXLINE, Scopus, and PubMed databases. The recommendation of this paper is for implementation of regular monitoring of blood glucose levels in CS2-exposed workers. Early detection and treatment may prevent onset of diabetogenic effect and ensuing retinopathy reducing the cost of workr ….workmen’s comp…and treatment in complications from this exposure. Additional monitoring of blood glucose levels in individuals in residential communities exposed to CS2 may also be warranted.

Carbon disulfide (CS2) has been associated historically with the manufacturing of viscose rayon manufacturing. With migration of the textile industry to Asia, research on CS2 exposure and resultant health effects related to CS2-exposed workers has diminished. Other industries that use or produce CS2 include petrochemical, agricultural, pesticide and industries involving fossil fuel extraction and production. The phenomenon of urban drilling was found to potentially increase the general public’s exposure to CS2 and other sulfur compounds commonly associated only with occupational exposures. Through this research CS2 and other associated sulfide compounds were found to be present in emissions related to natural gas extraction and processing operations at elevated concentrations in residential communities. This study is the first to identify the mechanisms by which CS2 contributes to an increased potential for glucose metabolism interference and retinal microaneurysms in occupational workers and the potential for exposure to residential communities experiencing natural gas extraction and processing.

Interference with glucose metabolism can indirectly cause other complications related to blood glucose levels, including retinopathy, which may be preventable if proper precautions are taken. (Expand??)

A literature review was conducted as an evaluative assessment rather than an annotated bibliography and focused on the potential diabetogenic effects from CS2 exposure to occupational workers. The search criteria was inclusive to all papers on occupational health effects of CS2 exposure. Due to the lack of current literature all study designs were included. Relevant articles were identified by a systematic search of Medline, TOXLINE, Scopus, and PubMed databases. The quality of all selected publications was critically reviewed.

It was proved by ——- that exposure to CS2 results in impairment of glucose metabolism and he proposed two possible mechanisms involving zinc metabolism and pyridoxine metabolism (Candura, Franco, Malamani, & Piazza, 1979).

Various studies have found that after exposure to carbon disulfide there is a change in the normal tryptophan metabolism cycle and concentration of various metabolites are being changed as a result of the carbon disulfide effect. Tryptophan is one of the 22 standard amino acids and an essential amino acid in the human diet. Amino acids, including tryptophan, act as building blocks in protein synthesis. In addition, tryptophan functions as a biochemical precursor for the following compounds (see also figure to the right):Serotonin (a neurotransmitter), synthesized via tryptophan hydroxylase.[8][9] Serotonin, in turn, can be converted to melatonin (a neurohormone), via N-acetyltransferase and 5-hydroxyindole-O-methyltransferase activities.[10] Niacin is synthesized from tryptophan via kynurenine and quinolinic acids as key biosynthetic intermediates.[11] Auxin (a phytohormone) when sieve tube elements undergo apoptosis tryptophan is converted to auxin…[12]

Tryptophan is an essential amino acid for normal growth in infants and nitrogen balance in adults [….]. Exposure to CS2 can cause Pyrydoxal deficiency [….].

Tryptophan converts niacin in the body in the presence of Vit B cofactor kynureninase.

Vitamin B6 is water soluble and have three forms (Driskell, 1994) that are able to convert into each other and play an important role of coenzyme in various enzyme system including Tryptophan metabolism [figure 1]. […]. A deficiency of vitamin B6 can cause interference in Tryptophan metabolism and lead to increased level of Xanthurenic Acid (XA) [Figure 2] (Ajayi, Maja, & Onabolu, 1989; Oxenkrug, 2013). Vitamin B6 deficiency can be measured by increased urinary XA level. XA may affect beta cells of pancreas and can affect insulin production (Kotake & Inada, 1953). Increased XA level results in decreased levels of active insulin (Kotake, Ueda, Mori, Murakami, & Hattori, 1975) and subsequently may produce a diabetic state (Connick, 1985).

Carbon disulfide has a mild diabetogenic action and pathogenesis of retinal microaneurysm due to carbon disulfide is closely related to that seen in diabetes mellitus [GOTO–].

Diabetic state can lead to complications such as retinopathy […..]. Studies have proved presence of XA in urine of diabetics (Kotake & Hattori, 1979).

Diabetic retinopathy is the most common cause of blindness in American adults [http://www.nei.nih.gov/health/diabetic/retinopathy.asp]. The study shows that exposure to carbon disulfide can lead to retinopathy [I. KARAI, K. SUGIMOTO, S.GOTO].

Both the one and two hour post glucose blood sugar level during prednisolone GTT were higher in cs2 workers than control and it was certified that this blood sugar level increases with lengthening of the duration and exposure.

Previous studies show that there is a definite relationship between carbon disulfide exposure and occurrences of retinopathy.

It is possible to improve retinopathy if exposure to CS2 is discontinued.

Results demonstrate that, in rat, tryptophan is mainly metabolized along the kynurenine pathway. Therefore, a rat is a suitable animal model for studying tryptophan metabolism in the pathology field. ( Allegri G,Ragazzi E,Bertazzo A,Costa CV,Rocchi R.).

A study by —— showed that there is increase in XA level in vitamin B6-deficient rats ,when tryptophan was supplemented however they found no realation between level of vitamin b6 and its effect on level of nicotinic acid (Ohguri, 1974). But later on,a study by —- shows there is increase in xanthurenic acid production and decrease in niacin metabolites after tryptophan load in vitamin B6 deficient mice (Bender, Njagi, & Danielian, 1990).

Excretion of Xanthurenic acid (XA), a product of tryptophan metabolism pathway, increased in animals while excretion of 4-pyridoxic acid decreases.

One molecule of Xanthurenic acid is able to bind to one molecule of insulin monomer and the biological activity of this complex is lower than of insulin alone. (I. Sperlingová, V. Kujalová,E. Frantík )( http://www.sciencedirect.com/science/article/pii/0013935182900159). This insulin- xanthurenic acid compound is 49% less efficient compare to insulin alone (Meyramov, Korchin, & Kocheryzkina, 1998).

(Gorny, 1980) carried out a study on CS2 exposed rats and provided them with different amount of B6 supplements. It was concluded that prolonged exposure to CS2 and limited amount of B6 in diet are crucial to B6 deficiency (Gorny, 1980). 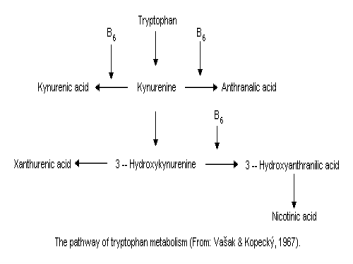 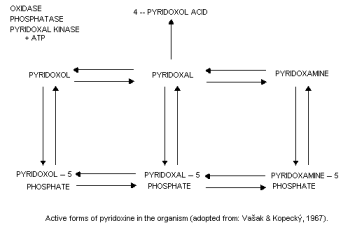 CS2 and sulfide compounds were found to be present in emissions from extraction and processing of natural gas.

The literature review found a strong association in viscose rayon occupational workers exposed to CS2 and an increased potential for alteration of normal glucose metabolism and retinal microaneurysms […].

The mechanism of action of CS2 on a biochemical level proved similar in natural gas workers as seen in viscose rayon workers.

GTT is successfully improved in these patients after treating them with B6 supplements (Bennink & Schreurs, 1975)

Natural gas occupational workers may be exposed to CS2 and sulfide compounds leading to increased potential for glucose metabolism interference, which has been an indicator for diabetogenic effect and increased incidence of retinal disease.

Natural gas occupational workers may be exposed to CS2 and sulfide compounds leading to increased potential for glucose metabolism interference, which has been an indicator for diabetogenic effect and increased incidence of retinal disease.

Natural gas occupational workers may be exposed to CS2 and sulfide compounds leading to increased potential for glucose metabolism interference, which has been an indicator for diabetogenic effect and increased incidence for retinal disease.

If diagnosis made early disease is treatable or at least we can stop progression of disease. Preventive measures at improving eye care for diabetic patients result in substantial federal budgetary and proves to be cost effective health investment for society[http://annals.org/article.aspx?articleid=709364][ Jonathan C. Javitt, MD, MPH; and Lloyd Paul Aiello, MD PhD]

By implementing proper strategy, we can reduce this morbidity and cost of treatment. The recommendation of this paper is for implementation of regular monitoring of blood glucose levels in CS2-exposed workers in oil and natural gas industry workers to prevent the diabetogenic effect and ensuing retinopathy.

Ohguri, S. (1974). Metabolic relationship between tryptophan, vitamin B6 and nicotinic acid in rats. Journal of Nutritional Science and Vitaminology, 20(4), 263-267.