A qualified nurse is central to the provision of safe, high quality nursing care and the backbone of the healthcare system. Qualified nurses are individually accountable for their own practice and have a personal responsibility to maintain their competency and meet professional standards in order to maintain their licence to practise. The role of the registered nurse has evolved with changes in advancing technology, newly defined client needs and changes in the way healthcare is delivered. In this way, it is not unreasonable to expect that the role of the registered nurse will continue to evolve and change. Qualified nurses are expected to develop their analytical problem solving and decision making skills throughout their nursing career (NMC, 2010)

Benner (1984) proposed that nursing knowledge develops through research and integration into clinical practise and experience. Importantly, experience is not a time based activity but can only develop in the context of education and knowledge acquisition. Characteristics acquired throughout the registered nurse professional career contribute towards a sustainable profession through role modelling, clinical leadership, mentoring and coaching, supervision, teaching and research.

The health reform environment will create opportunities for nurses to work in new models of healthcare delivery that provide quality health services to individuals, families and communities and enable nurses to practise to their full professional potential (North & Hughes 2012)

According to Scally and Donaldson (1998) clinical governance is a ‘system through which organizations are responsible for continuously improving the quality of their services and safeguarding high standards of care by creating an environment in which excellence in clinical care will flourish.

Clinical governance will not replace professional self-regulation and individual clinical judgement, concepts that lie at the heart of health care in this country, but it will add an extra dimension that will provide the public with guarantees about standards of clinical care (Sam Gilbraith 1998)

In another word, it can be summarized that clinical governance is a way to increase managerial control of health professions (Flynn, 2004).

Clinical Governance is composed of the following elements, Education, Clinical Audit, Clinical Effectiveness, Risk Management, Research and development and Openness. These elements are underpinned by the recognition of Communication, Teamwork and Leadership (Chambers et al. 2007).

Good clinical leadership is required to engage the entire practice team in a commitment to excellence.

A good teacher not only imparts key pearls of wisdom, but also acts as an exemplary role model and has non-cognitive qualities such as the ability to inspire students in the learning process (Sutkin et al., 2008) and reflect on his/her teaching practice.

Accountability is known as the key element for professional practice which is closely linked with delegation (NMC, 2010). A qualified nurse failure to comply with the issues of accountability such as accountable to the patient, her professional body, criminal law, employer through a contract of employment, and society generally through the NMC. The code: Standard of Conduct, Performance and Ethics for Nurses and Midwives (NMC, 2008a) As a nurse-leader, qualified nurses are professionally accountable to all the issues/problems that occur in their ward ( ICN, 2010).

They further explained that as autonomous practitioners, nurses are accountable for their own action/practice. Simply, accountability can be referred as accepting ownership for all aspect of their practice and must be able to justify their decisions (NMC, 2008c).

Mooney (2007) highlighted how ward managers’ expectations of newly qualified nurses were unrealistic, suggesting that pressures of the ward environment, being able to adapt and integrate quickly, and the added responsibility of accountability were particularly overwhelming.

Maben and McLeod Clark (1998) also noted inconsistencies in preparation for management, suggesting that while the theoretical context was adequate, the practical aspects, such as drug administration, prioritising, decision making and clinical skills were variable.

Caulfield (2005) states that maintains the patient’s trust in the individual nurse is important for professional accountability. Similarly, Ormrod and Barlow (2011) described explicitly that every nurse is responsibility to explain or answerability to offer justification of practice. The NMC (2010) code of conduct helped me how the laws and policies are set up to ensure safe and effective delivery of care given to service users under a patient group direction.

Staff nurse A &B were on night duty together with an assistant nurse. All three were working in the ICU. Suddenly one of the ICU patients went into a cardiac arrest. Staff nurse A announced a code blue .Four staffs from other units responded to the code blue. Staff A & B started the resuscitation process. While this happened all four respondents stood idle as they were unaware of what to do.

Teams and teamwork help to promote deep learning that occurs through interaction, problem solving, dialogue, cooperation and collaboration (Johnson & Johnson,1995). Teamwork is defined by Scarnati (2001, p. 5) “as a cooperative process that allows ordinary people to achieve extraordinary results. Training must given to all qualified nurses and ensure that they understand the concept of teamwork so that they can build a strong team.

In nursing, teamwork is essential for effective management and achieving positive results (Toofany, 2007). She further elaborated that NMC stressed all nurses must act to reduce errors and provide quality patient care by being part of healthcare team. A strong foundation which consists of creative leadership, clear goals and objectives (Clevenger, 2007) and trust (Blyth, 2006) determines success of a team.

Team members must be flexible enough to adapt to cooperative working environments where goals are achieved through collaboration and social interdependence rather than individualised, competitive goals (Luca & Tarricone,2001).

Cipriano (2010) maintains that delegation is an underdeveloped skill among nurses which is difficult to assess as it relies on personality, communication style and mutual respect between the registered nurse and the healthcare assistant.

Munn, Tufanaru, and Aromataris (2013), propose that there is a lack of clarity about the role of healthcare assistants complicates delegation processes. In order to build a good communication staff can be sent for team building courses so that can enhance their team work skills. According to Arnold B(1990), Team building is an effort in which a team studies its own process of working together and acts to create a climate that encourages and values the contributions of team members. Delegation can help others to develop or enhance their skills, promotes teamwork and improves productivity Sollivan.E.J et al (2009). When delegating, the delegator remain responsible for that care if he/she do not delegate appropriately as stated by NMC (2008) Heap (1996) affirms that the crux of the team building approach is love and spirituality which results in mutual respect, compassion, and humanity to work. West (1994) emphasised that organisations need to provide teams with adequate financial resources, administrative and technical support and professional education.

Hershey and Blanchard (1977) life cycle theory explains that the leadership behaviour translates to the characteristic of the follower.

Morse and Reimer (1956) suggest that different style of leadership is needed in different situation thus the concept of situational leadership.

Vroom (1960) seem to agree with Hershey and Blanchard by suggesting that the leaders should modify their leadership style to suit the people they lead.

In this situation, given that the four staff nurse that responded would have basic knowledge on performing CPR, the ICU nurse should have delegated the task. This given both task and relationship would have ranked low on the Hershey and Blanchard chart above. Delegating would have allowed the ICU nurse to assume the role of team leader to make major decision. Sarcevic, A., et al. Leadership structures in emergency care settings: a study of two trauma centers. [Erratum appears in Int J Med Inform. 2011 Aug; 80(8): e48]. International Journal of Medical Informatics. 80(4): p. 227-38.

When leaders delegate responsibility appropriately, team members become more confident and autonomous in their work (Capko 1996). Kane (1975) suggested that leadership be allocated to the team member with the most expertise, rather than being linked to professional groups. Tan (2006:p.3) stated leadership as “influencing followers to do what is necessary to achieve organizational goal or vision”. So, to be a successful leader, leadership and management skills are combined to achieve a common goal (Tan, 2006).

(Blegen, 1993, Irvine & Evans, 1995) share that changing the staffing mix can impact the quality of supervisory relation and influence staff outcome. This if had been implemented would have allowed better relationship to be forged between the ICU staff and the wad staff , which would have resulted in the situation been better managed.

This would have helped when the ward staff responded to the code. Such training not only improves knowledge but also help define the roles and responsibility in the advent of such situation. Bradley, P., S. Cooper, and F. Duncan, A mixed-methods study of interprofessionsl learning of resuscitation skills. Medical

One notable theory to consider is, David Kolb’s Experiential Learning Model (ELM).According to Kolb (1984, p.41) “Learning is the process whereby knowledge is created through the transformation of experience”. Kolb seek to argue that learning can exist without a teacher and merely through personal and environmental experience. Sabet (2005) recommended centralised, decentralised and mixed staffing system. As such having the staffs rotated at critical areas will allow them to get used to the practices and locations of item when handling an emergency situation.

It should include reflections on incidents and situations and what you have learned from them. A good model of reflective practice

Doing statistic on improvement of resuscitations

David Kolb's approach to reflection takes a somewhat different approach in some ways, as it sites reflection as part of a wider set of processes in which the learner seeks to understand their working processes as they move through different stages of engagement with an event, occurrence, or training session and take on relevant aspects of the new material. 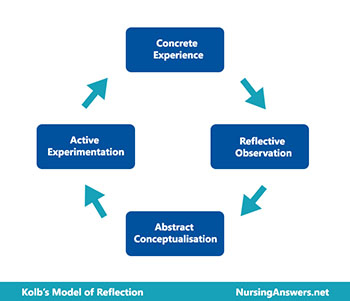 In this essay, it will be discussed how lifelong learning and the ability to use evidence-based practice as a nurse is essential to develop professionally. ...

The purpose of this case study is to reflect on the journey of care experienced by an older adult during an acute hospital admission. An evaluation of the care given will be carried out by examining t...

Importance of Having an Inter Professional Team

This essay is meant to throw light on the importance of having an inter professional team that would make the service delivery to patients easier. In this essay I will discuss the roles played by nurs...