Idiopathic pulmonary fibrosis (IPF) is a devastating interstitial lung disease that has no cure. The term fibrosis refers to scarring, in IPF particularly the scarring of the lungs. The scarring causes irreversible destruction and progressive decline of the lungs. When the tissue thickens, the lungs cannot properly exchange oxygen. The term idiopathic, in medicine, means that the origin of the disease is unknown. The exact cause of IPF is unknown, however, certain risk factors such as smoking, exposure to inhaled toxins such as asbestos, lung injury, viral, and bacterial infections, acid reflux and genetics associated with the disease. IPF mainly affects people ages 50 and up. “Many people live only about 3 to 5 years after diagnosis. The most common cause of death related to IPF is respiratory failure” (“What Is Idiopathic Pulmonary Fibrosis? – NHLBI, NIH,” n.d.). “40,000 people die each year to IPF, the same as to breast cancer” (“Facts About Idiopathic Pulmonary Fibrosis | Coalition For Pulmonary FibrosisCoalition For Pulmonary Fibrosis,” n.d.), yet IPF is still an unknown disease to many people. This paper will discuss the risk factors, disease process, complications, management, and new drug therapy clinical trials.

Idiopathic Pulmonary Fibrosis first started to become recognizable around the late 1800’s (Noble & Homer, 2005). While currently the exact cause is unknown, there have been several risk factors that are recognized to contribute to the disease. As mentioned above, smoking, exposure to inhaled toxins such as asbestos, lung injury, viral and bacterial infections, acid reflux and genetics are associated with the disease (Noble & Homer, 2005).

Smoking accelerates the loss of lung function by destroying the cilia inhibiting the lungs’ natural ability to clean and repair itself (Oh, Murray, & Molfino, 2012). Smoking also damages alveoli, causing poor gas exchange. The chemicals in cigarettes contribute to lung decline and disease and coat the lungs with tar and toxins (Oh et al., 2012).

Lung injury can cause permanent damage. Acute lung injury has been hypothesized to accelerate an underlying progression of IPF. When cells of the lungs are damaged, it can be irreversible (Kottmann, Hogan, Phipps, & Sime, 2009).

Viral and bacterial infections cause a build of mucus in the lungs. When the alveoli get clogged they cannot properly exchange oxygen and carbon dioxide. Each infection acquired can cause more damage and can lead to permanent damage. When the lungs lose their ability to exchange gas, oxygen is inhibited from reaching the body’s vital organs (Kottmann et al., 2009).

GER, commonly known as acid reflux, occurs when acid is aspired into the esophagus. “Researchers have found that 9 out of 10 people who have IPF also have gastroesophageal reflux disease” (“What Causes Idiopathic Pulmonary Fibrosis? – NHLBI, NIH,” n.d.)

Recent research has found that genetics may play an important role in the risk factor of developing IPF. “Over the past decade, one aspect that has held great promise in helping the medical community to better define the pathogenesis of IPF is the recognition that genetic factors may play a role in this disease” (Lawson, Loyd, & Degryse, 2011).

The cause of IPF is unknown. Despite considerable advancement in understanding the progression of IPF, the knowledge of the beginning stages of IPF re still inadequately understood (Noble & Homer, 2005). Originally, in the 1970’s, it was thought that inflammation of the alveoli was the cause (Noble & Homer, 2005). It was believed that untreated inflammation leads to the scarring of the lungs. Anti-inflammatory and corticosteroids were widely used to treat the inflammation. However, those therapies have proven ineffective, making it evident that inflammation was not the cause (Dempsey, Kerr, Gomersall, Remmen, & Currie, 2006).

The second theory that came about in the 1980’s suggesting growth termed “alveolar macrophage-derived growth factor” (Noble & Homer, 2005). Known as the ‘growth factor hypothesis’, it is believed that abnormal healing of trauma within the lungs exaggerates the response and growth of profibrogenic causing the scarring of IPF (Noble & Homer, 2005). This theory still proves to be a highly important discovery in the pathophysiology of IPF (Dempsey et al., 2006).

A third theory also came out of the 1980’s, known as the epithelial-mesenchymal hypothesis, suggests that tissue death of alveolar epithelial cells can lead to alveolar collapse (Noble & Homer, 2005). The epithelial- mesenchymal cell conversion can alter and change motility and the ability to heal. “Imbalance of the normal homeostatic microenvironment might be, per se, a cause of fibroblast proliferation and myofibroblast differentiation leading to fibrosis” (Prunotto et al., 2012).

The gold standard for diagnosis of patients with IPF is a surgical lung biopsy (SLB), however critical risk for these patients usually prevent a high-risk surgical procedure (Kaarteenaho, 2013). “The mortality, which can occur shortly after the procedure, has probably been the major reason to refrain from performing SLB” (Kaarteenaho, 2013). With that in mind, diagnosis of IPF includes clinical, radiologic and histopathologic aspects (Wolters, Collard, & Jones, 2014). The American Thoracic Society states, “in the absence of a definitive lung biopsy, the presence of all four major criteria and three minor criteria, as set forth in the current guidelines, increases the likelihood of a correct diagnosis of IPF:

•Exclusion of other known causes of interstitial lung diseases, such as certain drug toxicities, environmental exposures, and connective tissue diseases

•Duration of illness greater than or equal to 3 months 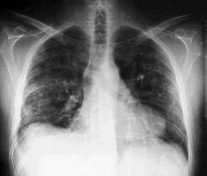 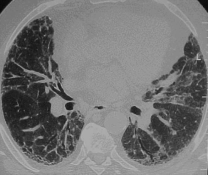 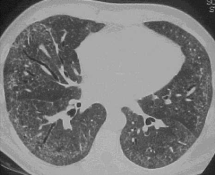 Idiopathic pulmonary fibrosis is a highly progressive disease. Because the tissues in the lungs are scarred, they cannot properly exchange gas and the low amount of oxygen delivered to the body causes several complications and puts strain on the right side of the heart. According to the America Thoracic Society, “There is an increasing awareness of complications and comorbid conditions frequently associated with IPF” (Raghu et al., 2011). Some of the most common complications are: Pulmonary hypertension, cor pulmonale, respiratory failure and lung cancer (Daniels, Yi, & Ryu, 2008). Depression is also often seen in people with IPF because of its devastating prognosis (“Living With Idiopathic Pulmonary Fibrosis – NHLBI, NIH,” n.d.). Acute exacerbations (unexplained worsening of dyspnea) of IPF represent the most destructive and deadly complication (Raghu et al., 2011). “It is presently unclear if acute exacerbation of IPF is simply a manifestation of an unidentified respiratory complication (such as pulmonary emboli, infection) contributing to an acute worsening in a patient with IPF or represents an inherent acceleration in the pathobiological processes involved in IPF” (Raghu et al., 2011).

There is currently not a cure for idiopathic pulmonary fibrosis (“What Is Idiopathic Pulmonary Fibrosis? – NHLBI, NIH,” n.d.). Until recently, primary methods of management have been anti-inflammatories and lung transplants (Dempsey, Kerr, Gomersall, Remmen, & Currie, 2006). While Anti-inflammatory are still used today it is not due to the effectiveness of treatment, but lack thereof for alternatives (Dempsey et al., 2006).“Immunosuppressive or cytotoxic agents are used among steroid nonresponders, patients experiencing serious adverse effects from corticosteroids, and patients at high risk for corticosteroid complications” (Harari & Caminati, 2005). “Single-lung transplantation results in an actuarial survival of 73% at 1 year and 57% at 3 years” (Harari & Caminati, 2005). Unfortunately, most patients are not eligible for transplant due to age or comorbidity factors (Harari & Caminati, 2005).

During the past decade, there has been a notable amount of research into the treatment of idiopathic pulmonary fibrosis. IPF is no longer believed to be due to inflammation, but multiple injuries with atypical cell repair. According to The Coalition for Pulmonary Fibrosis, “there are many therapies under investigation in clinical trials that include:

•Antifibrotic or antifibrogenic agents (such as Pirfenidone, interferon and certain blood-pressure-lowering medications) to suppress the scarring process

•Antioxidants (such as N-acetylcysteine) to prevent damage to lung tissue

What Are the Signs and Symptoms of Idiopathic Pulmonary Fibrosis? – NHLBI, NIH. (n.d.). Retrieved February 17, 2015, from http://www.nhlbi.nih.gov/health/health-topics/topics/ipf/signs

Idiopathic pulmonary fibrosis (IPF) is a devastating interstitial lung disease that has no cure. The term fibrosis refers to scarring, in IPF particularly the scarring of the lungs. The scarring causes irreversible destruction and progressive decline of the lungs. When the tissue thickens, the lungs cannot properly exchange oxygen.

Jennifer Beardsley Abstract Idiopathic pulmonary fibrosis (IPF) is a devastating interstitial lung disease that has no cure. The term fibrosis refers to scarring, in IPF particularly the scarring o...