Healthy People 2020 (HP 2020) defines mental health as being vital to personal well-being familial and interpersonal relationships, and allowing for the capacity to successfully contribute to one’s community and society. (U.S. Department of Health and Human Services, Office of Disease Prevention and Health Promotion [HHS], (2010). The main goal of the HP 2020 mental health status initiative is to improve mental health through prevention services and increase screening to ensure accurate diagnosis, effective treatment.This paper will focus on the  HP 2020 MHMD-7 objective, which aims to increase the amount of juvenile residential facilities that screen admissions for mental health problems.

One of the most effective ways to respond to the mental health treatment needs of youth in the Juvenile Justice System (JJS) is to systematically assess and identify unmet needs with the use of mental health screening tools. The majority of youth who come into contact with the JJS have a diagnosable mental or substance use disorder. It is important to screen youth for mental health problems as it greatly affects their development.

Nonetheless, there are still some juvenile residential facilities that still do not provide adequate mental health screenings and assessments. As a result, many people, especially vulnerable populations including minority populations get diagnosed and screened for mental health problems at lower rate and suffer from a higher risk of mental and substance abuse disorders raising significant bioethical issues, primarily in the form of beneficence, non-maleficence, and justice.

Screening is defined as a brief process conducted by non-clinical staff to identify youth mental or emotional conditions and to identify if they might have a behavioral health disorder. (Grisso, 2001) Research has demonstrated that serious mental health and substance use disorders can greatly affect the rehabilitation of youth who come into contact with the juvenile justice system. Behavioral health screening measures and procedures must be in place to identify mental illness and substance use disorder needs.

Historically, the mental health needs of children and adolescents have been inadequately addressed both in policy and practice. In the early 1990s, mental health screening within the juvenile justice system was nonexistent. It was viewed as more optional than the rule; it was intended to be superficial and non-standardized. Institutional settings were more punitive and attempting to treat behavioral issues with harsher punishments for crimes. It took a much deeper understanding of mental health-related issues among youth within juvenile justice settings before reform could happen. During the late 1990s, the Office of Juvenile Justice and Delinquency Prevention’s (OJJDP) goal was to shift from extreme punishments to an approach that emphasized community health and rehabilitation. The number of youth diagnosed with  mental illness and their level of unmet need is now being recognized.   Mental health screenings became mandated for the first time in 1998, as more research studies were conducted. (Center for Mental Health Services, 1998)

In the current day, The OJJDP recommends a health screening to be performed during the intake process as youth first enter a juvenile residential facility. According to Underwood and his colleagues (2016), screening must be research-based and standardized and should be conducted fairly early in the process. In recent years, more light has been shed on the mental health needs of youth in the JJS at the Federal level. In the last couple of years, the Civil Rights Division of the U.S. Department of Justice investigated the inadequacy of mental health care and services in juvenile correctional facilities in various states (Butterfield, 1998). In addition, U.S. Department of Health and Human Services’ Center for Mental Health Services developed the first national survey of juvenile justice facilities which identifies current mental health services (Center for Mental Health Services, 1998). Moreover, Congress took into consideration many bills that mandate the use of mental health screenings and treatment programs for youth in the JJS. (Manisses Communications Group, Inc., 1999). Mental health screening, assessment, and treatment did not become mandatory until the early 2000s.

According to NAMI, approximately 50% of chronic mental health conditions begin by age 14 and 75% begin by age 24. In terms of prevalence rates, youth who are diagnosed with mental disorders within the JJS is found to be much higher than the general population of adolescents (Grisso, 2000) Among two million youth, approximately 50% to 75% of youth meet the criteria for a mental health disorder within the JJS. In those findings, at-least 5% to 30% have been diagnosed with depression. (Underwood & Washington, 2016) Multiple studies confirm that two thirds of youth in detention or correctional settings have at least one diagnosable mental health problem. Dembo (1996) found that the prevalence psychiatric disorders in adolescents were about 16.5%. Moreover, youth in the JJS are at high risk for mental health problems which has contributed to criminal behavior and may interfere with rehabilitation (Wasserman & Larkin, 2005). From the 1960s through the 1990s, Roberts et al found that the mean prevalence of psychiatric disorders in the general adolescent population ranged between  6.2%–41.3%. In comparison, prevalence rates in the juvenile justice population range from 50% to 100% when disruptive behavior disorders are included. Youth with psychiatric diagnoses can have more than 1 psychiatric diagnosis (comorbidity) or co-occurring psychiatric and substance abuse disorders. In addition, minority youth may be more reluctant to admit to experiences with mental illness, or they or their families may have a cultural bias against seeking care.

The Medicaid Early and Periodic Screening, Diagnosis and Treatment (EPSDT) law requires states to provide Medicaid-eligible children regular mental health screenings. Substance Abuse and Mental Health Services Administration (SAMHSA) developed an  initiative to improve policies and programs for youth in contact with JJS with com-morbid disorders. Six states are dedicated to policies and programs for screening youth with mental health disorders (Arkansas, Michigan, Minnesota, Mississippi, South Carolina, and Virginia) Some states even have community-based treatment programs for youth who are not considered a danger to society and at risk of for their psychological disorder.

Virginia and Texas legislation requires the JJS to mandate continuity of care for mental health, substance use, and other therapeutic treatments for youth who come in contact with the JJS. (NCSL, 2011)

HP2020 is measuring and identifying the mental health problems experienced by youth within the juvenile justice system via the Youth Risk Behavior Surveillance instrument. The data from that survey are found that at least half of youth reported problems with anxiety, anger, and loneliness, and approximately ⅕ had a previous suicide attempt. (Morris et al., 1995)

This self-report instrument requires no clinical expertise to administer or interpret; is low cost and can be used by a range of ages, different ethnic groups, and both genders; and demonstrates reliability and validity. (Grisso, 2001) It is a tool supported by heavy evidence-based research, that has been adopted for use among 49 states for probation and correctional settings.

In 2006, the baseline for the Healthy People 2020 objective was 58% of youth within juvenile residential facilities were screened admissions for mental health disorders. The target goal of this objective is a 10% improvement and a target of 64% of residential  facilities screenings for mental health disorders. Baseline hasn’t changed since the Healthy People 2020 launch, so it is highly unlikely the goal of 64% will be reached by 2020.

Justice is affected when fairness and the distribution of who receives care comes into play. Mental health care cannot be solely for youth within the general population. Opportunities have to be distributed fairly amongst society at large.

Beneficence/non-maleficence is addressed in that not having access to mental health screenings negatively affects those in need. The idea to do no harm is exemplified by offering screenings in all facilities to those who require it. This is malevolent since we know the importance of how mental health affects the overall health of youth. To protect those with diminished autonomy especially within a vulnerable population such as youth within JJS.

Epidemiological studies have shown that youth are  at increased risk for mental health problems come from low-income households, those in the child welfare and juvenile justice systems. (Howell, 2004) Incarcerated Black youth have the lowest rate of mental health diagnoses and have less mental health care than their White counterparts. (Howell, 2008) Minority youth may be more reluctant to admit to experiences with mental illness.Adolescent females reveal greater persistence of emotional problems and worse outcomes. Youth who come from poorer neighborhoods and have lower socioeconomic status. Research has found that socioeconomic status (SES) plays a significant role for black and Hispanic youth and poverty is likely to be the underlying factor that most influences trends in juvenile crime. 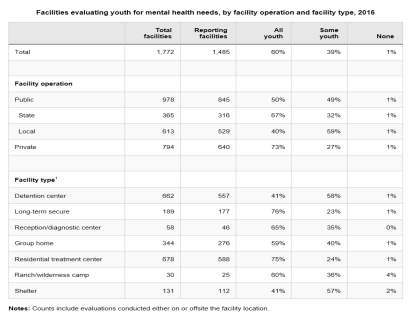 Mental health is an important factor in successful everyday functioning and long-term health outcomes. Despite an increased emphasis on mental health care and access to services, the U.S. has made little progress in reaching their Healthy People 2020 goal. However, research suggests that the juvenile justice system cannot rely on other systems to provide information on the previous use of mental health screening services for all youth at entry. There is a need for more juvenile residential facilities to implement early screening processes. There is a strong need for more research to create narratives regarding the mental health needs of youth and implement the best policies to respond to their mental and behavioral health.