The purpose of this paper is to give a brief overview of the current literature and research available on Polycystic Ovary Syndrome and its effects on mental health. While largely overlooked and under-researched, mood disturbance, depression, and anxiety are common among women suffering from Polycystic Ovary Syndrome. Mental health providers and medical providers need to work collaboratively to create care plans aimed at improving the psychological health, self-efficacy and quality of life for women with this disease.

Polycystic Ovary Syndrome (PCOS) is a chronic endocrine disorder that affects a large number of women, 8%-10% globally (Deeks, Gibson-Helm, & Teede, 2010), and affects women of all races, ethnicity, and sexual orientation. “It is estimated that roughly 5 million women in the United States suffer from PCOS” (Niemi, 2012). Most women will start seeing symptoms of PCOS in adolescence around the time their menstruation begins, but for some symptoms may not present until they are into their early to mid-20s. Symptoms of PCOS are lifelong (Deeks et. al, 2010). It is common for PCOS to go undiagnosed and untreated for long periods of time, often due to symptoms being attributed to other causes. Some medication such as birth control can mask some symptoms making detection more difficult.

There is yet to be a definitive conclusion on the etiology of PCOS (Farrell & Antoni, 2010), but what is understood is that there is an overproduction of androgens (male sex hormones), assumed to be related to dysfunctional communication between the pituitary gland, ovaries, and the hypothalamus (Niemi, 2012). The lack of normal, consistent, or present menstruation is due to the women’s body not ovulating, which then causes the body to cease production of progesterone, the hormone that is largely responsible for pregnancy preparation and regulation of menstruation (Niemi, 2012). Though PCOS is an endocrine disorder, it is also associated with cardiovascular, gynecological, and dermatological complications making it a very complex disease (Kerchner et. al, 2007).

One of the most common signs of PCOS is irregular or missed menstruation as a result of not ovulating. Many, but not all women develop cysts on their ovaries which can be extremely painful leading to rupture and scarring. Other common symptoms include weight gain; the rate of obesity for women with PCOS ranges from 40 to 60% (Pasquali, Patton, Diamanti-Kandarakis, & Gambineri, 2007), impaired glucose tolerance, insulin resistance, high blood pressure, abnormal increase in blood lipids, (Fatemeah et. al, 2017), heavy menstruation, fatigue and low energy, hirsutism; excess growth of facial and body hair in areas where males generally see hair growth, alopecia, acne and other skin changes, headaches, insomnia and sleep apnea, pelvic pain, mood changes; depression, anxiety, mood swings, and infertility; which PCOS is the leading cause of infertility in women. Those with PCOS are also at a greater risk for type II diabetes and increased risk of cardiovascular disease (Farrell & Antoni, 2010; Fatemeah et. al, 2017; Niemi, 2012).

There is an overall lack of understanding around PCOS as much is still unknown about the medical condition (Blay, Aguiar, & Passos, 2016). This is true in the medical field, and even more so in the mental health field. The vast majority of research on PCOS surrounds its physical symptoms, while little attention has been paid to the multiple connections it has to psychological symptoms even though “it has been reported that 57% of women with polycystic ovary syndrome have at least one mental disorder” (Fatemeah et. al, 2017), with depression, anxiety, and social anxiety being most common (Farrell & Antoni, 2010). A two year longitudinal study at the University of Iowa PCOS clinic reported their findings as 40% of the participants screened in for depression, with 15% qualifying for Major Depressive Disorder via the DSM-5 (Kerchner et. al, 2007).  While another study conducted in Australia focused on the under-reporting of anxiety in PCOS patients and reported their finding as 29% of their participants met DSM-5 criteria for depression while 57% met the criteria for anxiety (Deeks et al., 2010).

While it is challenging to determine exact percentages due to the many factors and variations of symptoms of in PCOS in each woman, what research has repeatedly proven and is widely agreed upon is that “women with PCOS exhibit significantly more emotional distress compared with women without PCOS” (Veltman-Verhulst, Boivin, Eijkemans, & Fauser, 2012). Farrell & Antoni (2010) state that emotional disturbances such as chronic stress and depression heighten a person’s risk for developing physical disease such as, diabetes, cancer and cardiovascular disease.

It is understood that a healthy mental state is fundamental to good health and overall quality of life. For women suffering with PCOS and side effects such as obesity, inability to lose weight, acne, infertility, low self-esteem, sexual dysfunction, and the constant stress of trying to manage symptoms, it all can feel overwhelming. Aside from the significant risk factors for depression that come with PCOS, having a diagnosis of a chronic disease is in itself a known risk factor for depression (Deeks et. al, 2010). Along with depression and anxiety, women with PCOS are at an elevated risk for eating disorders (Farrell & Antoni, 2010).

Treatment options vary greatly depending on the needs and goals of the patient/client. For many the goal is simply to be able to conceive a child, for others it is weight loss, diabetes prevention, or management of the many other symptoms. Current recommendations suggest that lifestyles changes are the first approach to PCOS management and should always precede medication and fertility treatment. Weight loss can lead to significant improvement in symptoms, increase ovulation, and improve fertility and insulin resistance (Fatemeah et al., 2017). Reducing insulin resistance, which has a well-established link to depression, can improve mental health for many women with PCOS (Farrell & Antoni, 2010).

Recommended lifestyle changes include weight loss (even a 2%-5% reduction in weight has shown significant improvement in treating PCOS symptoms), diet change, regular exercise (exercise alone has been shown to improve insulin sensitivity), quitting smoking, minimal or no alcohol consumption, addressing psychological components by decreasing stress, anxiety, and depression (Farrell & Antoni, 2010).  Diet is the main tool used to address symptoms of PCOS with low-carbohydrate, high-protein being the generally agreed upon diet regimen. An interesting finding is that even when no weight loss occurred, women who maintained a low-carbohydrate, high-protein diet “for 16 weeks showed significant improvements in depression and self-esteem, whereas there were no such changes in the group randomly assigned to consume a high-carbohydrate low-protein diet” (Farrell & Antoni, 2010), this is thought to be due to this specific type of diet increasing brain serotonin levels.

Other treatment areas include alleviating insomnia and sleep disturbance. Research has shown that improving the quality of sleep can positively impact PCOS symptoms; decreasing daytime fatigue as well as depression and may also affect weight and inflammation (Farrell & Antoni, 2010).  Medication for insulin resistance, sleep aids, medications to manage hormone imbalances, and birth control may be helpful for some women. Group exercise programs have been shown to be more successful for women with PCOS compared to attempting to exercise alone (Conte, Banting, Teede, & Stepto, 20014), and those implementing an exercise routine report improved mental health conditions even in the absence of weight loss.

“Mood is highly clinically relevant given that it impacts self-efficacy negatively, that PCOS is common, and that PCOS therapy requires self-motivation, self-efficacy, and lifestyle change” (Deeks et al., 2010). A key factor to keep in mind when working with women with PCOS is that while lifestyles changes may be the key to reduction in symptoms, improvement in self-efficacy and with mental health, the symptoms themselves (depression, anxiety, low energy) are often barriers and may prevent lifestyle change (Fatemeah et al, 2017).

While PCOS diagnosis and management generally fall to the woman’s medical team, it has been proven that the mental health aspect is often overlooked or under-represented in treatment plans. The lack of knowledge surrounding PCOS and its direct linkage to mental health disorders leaves many woman feeling “lost, alone and overwhelmed” (Niemi, 2012). The idea treatment for women with PCOS would integrate wraparound services aimed at addressing the mental health aspects of the disease and improving quality of life for women as well as addressing the physical aspects. Mental health professionals and medical professionals need to collaborate effectively so that this complex disease can be addressed effectively.  Not only would this be more beneficial in symptom reduction as a whole, but it would reduce healthcare costs in the long run. However as it stands, the medical field is a long way off from making this approach to treatment the standard for care (Fatemeah et. al, 2017).

Social workers should be aware of the emotional health aspects of PCOS and have a basic understanding of the condition so they can best serve and support clients suffering with this condition (Veltman-Verhulst et al., 2012). Social workers can be on the lookout for symptoms, (especially mental health symptoms), connect clients to proper medical staff who can screen for PCOS, connect client’s with the diagnosis to resources and use strength-base approaches with clients aimed at helping reduce stress, depression and improve their outlook on life. To properly address PCOS both physical and psychological symptoms need to be treated, otherwise treatment is unlikely to be successful and can leave women feeling like they are failures.

Women with PCOS often struggle in home, work, and social settings. Women report struggling in the workplace due to feelings of insecurity due to physical appearance, fatigue, and mood swings, making it difficult to socialize and maintain healthy working relationships. Barriers to intimate relationships include the struggle with depression, anxiety, increased stress response, infertility issues, changes in physical appearance, loss of sex drive, sexual dysfunction, and lack of support (Niemi, 2012).  These issues can easily effect family functioning as well, impacting the parent’s ability effectively parent and can negatively impact the parent/child relationship.

Ways in which Social Workers can help improve the mental health of women with PCOS include; recognizing the importance of social and emotional supports, helping to build self-esteem, ensuring healthy intimate relationships, teaching coping skills to deal with heightened emotions, decreasing isolation, helping to connect to PCOS support groups, making sure the medical aspects are being adequately addressed and managed, providing both individual and family counseling, and helping identify ways to reduce stress overall.

PCOS is a devastating endocrine disorder among women worldwide. The chief cause is unknown yet. This syndrome displays a variety of reproductive, metabolic, cardiovascular and psychological features. Management primarily focuses on lifestyle modification along with certain pharmacological medications for presenting symptoms. 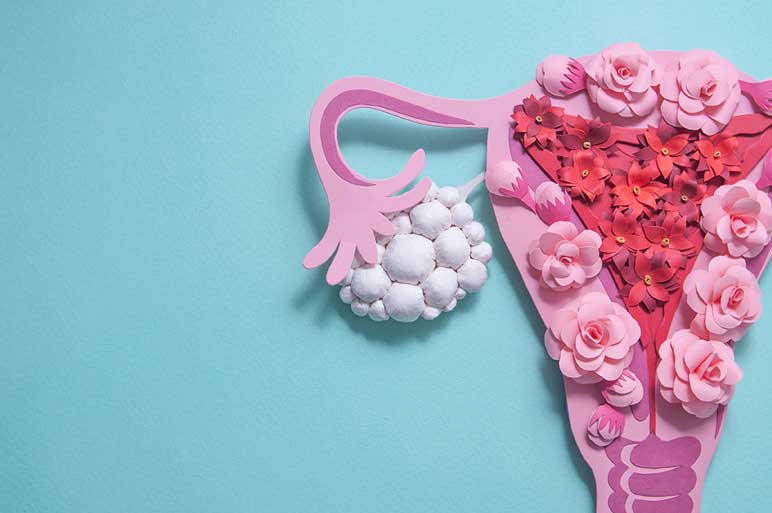 Polycystic Ovarian Syndrome in the Reproductive Woman: An Epidemiological Approach Abstract One of the most prevalent disorders among women with reproductive age is polycystic ovarian syndrome (PCOS)...

P.C.O.S. & Mental Health: Literature Review Introduction The purpose of this paper is to give a brief overview of the current literature and research available on Polycyst...

Women of all ages have been faced with problems associated with gynecological issues. Particularly young women of childbearing years have dealt with disorders of the reproductive system. These disorde...