World Health Organization (WHO) defines adolescence as the period between 10 and 19 years of age. During this period, they have to face a lot of changes which may include physical, mental, emotional or psychological changes. Yet they are the once whose health is neglected the most, especially that of female adolescent group. [1]

Health awareness not only includes the awareness for infections, diseases or disorders but also health related topics like physiological changes, psychological changes, hormonal changes, importance of exercise to stay fit, time for entertainment to stay active and happy etc. Adolescents in rural areas are often devoid of health care facilities and tends to fall sick more often. Both genders faces different types of problems. They even get addicted to un-healthy activities due to lack of awareness and peer pressure.  Government of India has implemented many schemes for the spread of health awareness, but due to unknown reasons, it is not yet uniform among both the genders.

If they are aware of health issues surrounding them, they can fight or prevent them and can improve their lives. Female’s health has been always neglected in rural India and now as to be prioritised because not only they support family by sharing the economic burden but they also take care of the entire family. In order to share all responsibilities both males and females have to be fit and that should start from the very beginning, right after birth.

With implementation of new schemes and involvement of latest technology like internet; health awareness is improving[2] The teachers also teach them the benefits of health exercise and the requirement of time for recreational activities so that they can live a happy life.

Their answers to the questionnaire can help us to understand the awareness of health in rural areas and we could bring further changes or implement new plans for spreading health awareness especially if one of the gender is lacking behind in one area.

The present study was conducted as a cross-sectional study in September, 2014 at a local school in Nhava village, Raigad District in Maharashtra State, India. A well-structured questionnaire was distributed randomly to 102 high school students which included 60 males and 42 females between 15 to 19 to evaluate gender variation in health awareness and attitude towards awareness of side effects of tobacco consumption leading to oral or lung cancer, Sexually Transmitted Diseases (STD) and its transmission route, reaction on stress situations, knowledge of body mass index and ill effects of being malnourished, importance of having breakfast and in between meals with time for exercise and recreational activities, evaluating depression by asking mood changes. Their family type, number of members and average family income, per capita income were also found out. They were asked if they suffered from any other disorders or diseases.

The required official permission to select and collect the relevant data from selected subjects was solicited and obtained from the Principal of the respective school. There were 13 questions and the questionnaire was collected on the spot from participants after explaining them the importance of study and obtaining their oral consent. Writing names on the form was optional and was informed that their identity will be kept hidden in all ways possible if they chose to write their names. The survey was carried out in their school timings and free periods.

The data were entered into the computer (Microsoft Office, Excel) and were subjected to statistical analysis using the statistical package SPSS version 19. 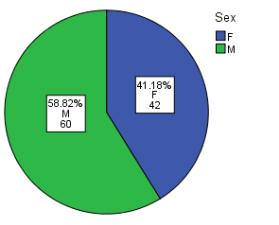 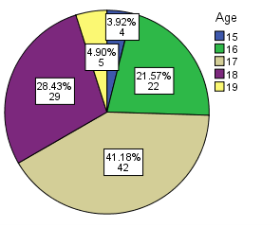 Here we noticed that only 69% Females said that they were able to have breakfast as compared to 81.7% Males. Values are given in Table 1. n=Number, %= percentage

We noticed that 57.1% females here just said that they are able to do exercise and spare some time for recreation as compared to 80% approval from the males regarding the same.

It is interesting to see that only 5 males used to consume tobacco in cigarettes form which is 4.90%. Females denied taking any tobacco in any form. The values are depicted in table 3

Here we noticed that Females are more aware of the side effects of taking tobacco. Their awareness rate is 95.2% as compared to 78.3% of Males. The values are depicted in table 4.

Mostly everyone knows about STD and its of route of spread. More details are depicted in table 5.

BMI of the study subject was calculated by using the formula weight (kg)/ height2 (m2). For grading proposed criteria of BMI for Asians (Choo V 2002) and CDC (2010) was adopted.

We noticed that females tend to be more underweight as compared to males. Males being more prone to obesity at this age. The mean BMI for females was 20.41

BMI values are depicted in Table 7

We noticed that almost half of them prefer to talk to their friends when they are depressed. Few females do cry or starve as well.

We also asked for any other diseases or disorder which they may be suffering from. 2 of males said that they are suffering from Diabetes and 1 female had ulcers.  We also took family history which included number of family members, earning members, total family income per month and level of education.

Adolescents are the future of the country. As they reach puberty, they face a lot of changes in many ways which includes physiological, hormonal, emotional and mental. Females tends to receive more challenges because of the physiological and hormonal changes occurring with the start of their puberty. [3] With the rise of menstrual cycle they often tend to get more depressed before getting adjusting to it.

Females may face malnourishment due to male children being given priority to eat first [4] or may be due to body weight consciousness leading to disorders like bullaemia or Anorexia nervosa  or depression. [5]

STD Awarness & its route of transmission

In later years of adolescent age, teenagers especially males tends to get physically attracted and intimated with the opposite sex and the risk of contacting STD’s rises if proper protection not used.7]  Dr. Kotecha had conducted two studies in urban and rural areas respectively, amongst school going students regarding reproductive health awareness and found out that in both rural and urban areas; about one-third of the boys and one-fourth of the girls knew about contraception. Two-thirds of boys and girls had information of HIV/AIDS, and about half of them correctly knew various modes of transmission of HIV in both urban and rural areas. Majority of the adolescent were even ready to visit the Adolescent Friendly clinic if there was any in near-by areas. [8,9]

Along with rise in STD’s prevalence and incidence there is a rise in increase of cigarette smoking among adolescent age [11] andstudents are vulnerable to tobacco addiction, especially males.[12]This can have harmful effect. A study conducted in state of Gujarat, India, showed that there has been increasing trend of smoking cigarettes at younger which is a matter of great concern13]. Early use of tobacco smoking may lead to many harmful effects like hypertension, lung cancer and may even lead to end stage organ in later years of life[14].

The present study showed that 4.9% males has consumed tobacco in any form in a rural area which leads to a conclusion that the tobacco consumption might be at a larger scale in urban areas. All females denied taking tobacco in form. It also noticed that females are more aware of the side effects of taking tobacco. Their awareness rate was 95.2% as compared to 78.3% of Males.

Also adolescents are at increased risk of getting stress related depression. [16]They are easily influenced by changes around them which affects their biological, emotional, cognitive, and social functions. Unhealthy and anti-social behaviours are manufactured in these years but if stopped, can be moulded back or may change permanently. [17]These anti-social changes are common in males as compared to females

There are many differences in health awareness between males and females of the adolescent age group. We need to decrease the bridge between them and for that we need to change some of our health policies. In some areas females have better health awareness like awareness in STD spread and side effects of taking tobacco in any form, whereas males have better knowledge in understanding the importance of taking proper breakfast and in taking some time off for entertainment. Along with that they also know the ill effects of   malnourishment. If we need our youth to progress at a faster rate, we need them to be healthy at mind, body and free from diseases. For that, we need to inculcate health awareness in both genders and should decrease the bridge between the awareness.

Sample size of study was small due to limited number of students in the school. In future, we want to study on more than 500 students of multi-schools in more than 5 districts involving rural areas.

Gender is the range of characteristics pertaining to, and differentiating between, femininity and masculinity. Depending on the context, these characteristics may include biological sex, sex-based social structures, or gender identity.

As a family nurse practitioner (FNP) student, it is important to provide unbiased and culturally-competent healthcare services regardless of age, race, religion, socio-economic status, or gender orie...

Depression, either as a single depressive episode or as a recurrent depressive disorder, is a common mood disorder which is characterised by low mood, resulting in loss of interest and enjoyment, red...

Relationship between Gender Inequality and Hunger

Relation of Gender Inequality and Hunger Hunger, malnutrition and poverty are natural human phenomena, but they are often discussed in ways that are far removed from people’s experiences and thus c...