This case presents a 47 year old traffic warden who had pain on the sole and heel of the foot. The patient had previously suffered a fracture in the right big toe, 4 months ago to which no treatment or rehabilitation was given. 3 months ago the client had an increase in road running and started to notice a dull ache on the arch of the foot, two months in to running, which eases when rubbing the arch of the foot (P1). No treatment was sought and the client continued to run with the pain gradually getting worse. The pain developed into a sharp, localised pain on the heel of the foot two weeks ago, aggravated immediately by running and 10 minutes into walking (P2).  After around 30 minutes of rest (P2) subsides back into a dull ache (P1). ‘SIN’ would suggested the severity of the injury was moderate, with a high irritability and a mechanical/chemical nature. These findings suggest a working hypothesis of Plantar Fasciitis.

A fracture to the big toe can cause stiffness which would affect the patients ability to extend the toe affecting the windlass mechanism (Miyazawa, Yanagita, Edo, Takahashi, & Ishida, 2015).  Inability to extend the big toe would lead to increased foot pronation (Bolgla & Malone, 2004). Severe over pronators, or runners who experience prolonged periods of over pronation may be at risk of lower extremity injury due to the potentially large torques generated within the lower extremity (Ferber, Hreljac, & Kendall, 2009) these factors lead to foot instability and affect the windlass mechanism (Miyazawa et al., 2015). During the windlass mechanism the great toe needs to passively extend in order to apply tension to the plantar aponeurosis, this draws the calcaneus and forefoot closer together, raising the medial longtitudinal arch (Lucas & Cornwall, 2017). This process aids in resupination of the foot and is critical in increasing the forward propulsive force and lifting the foot during ambulation. The great toe fracture would mean the windlass mechanism is ineffective or absent and would prevent or affect the foots ability to  move out of its pronation and cause lower extremity pain and dysfunction (Lucas & Cornwall, 2017).  Kappel-Bargas, Woolf, Cornwall, & McPoil (1998), found that people with greater tensile forces applied to their planta fascia during weight bearing exercise that includes extension of the first metatarsophalangeal joint could be predisposed to plantar fasciitis. The same study also found that the rise of the medial longtitudinal arch is active during first metatarsophalangeal joint extension, which shows that in order to have a fully functioning windlass mechanism, the metatarsophalangeal joint must be able to functionally extend for the windlass mechanism to be working and effective.

The windlass mechanism, is the biomechanical process in which the tightening of the plantar fascia rises the longtitudinal arch, without direct muscular action and has an important factor in resupination of the foot in the later proportion of the stance phase. (Kappel-Bargas et al., 1998). The patient reported a fracture to the big toe two months prior to P1 appearing and no treatment was given without treatment or rehabilitation, the toe would not be fully functioning. The first metatarsophalangeal joint consists of 2 two sesamoid bones, these two bones play a large role in the function of the great toe. They function to protect the tendon of flexor halluces longus, increase the mechanical advantage of the intrinsic musculature of the hallux and to absorb most of the weight-bearing on the medial aspect of the forefoot (Brukner & Khan, 2009)

Plantar Fasciitis has been liked with faulty lower limb biomechanics and recent studies show that many overuse injuries, such as Plantar Fasciitis can be the result of excessive foot pronation (Bolgla & Malone, 2004) The patients fracture to the toe would mean it is painful during toe off, this would cause the patient to pronate for a prolonged period of time (Mouhsine et al., 2004). It has been found that the excessive pronation causes increased ground reaction forces on the medial aspect of the foot, which increases the load on the medial longitudinal arch and increased strain on the plantar fascia and plantar musculature (Brukner & Khan, 2009). Without big toe extension, this would cause the patient to over pronate, increasing the chances of developing plantar fasciitis (Bolgla & Malone, 2004). During stressful activities, such as running, which the client had increased, or walking for long periods, which is part of the patients occupation, the achillies tendon can become shortened. If the achillies tendon has become shortened, dorsi flexion is limited which will cause excessive over pronation to overcompensate for the lack of dorsi flexion (Puttaswamaiah & Chandran, 2007)

Gait is a basic requirement for daily activities and if gait is asymmetric due to function, in regards to propulsion, there will be greater plantar pressure on the anterior aspect of the foot (Mayolas Pi, Legaz Arrese, Villarroya Aparicio, & Reverter MasiÀ, 2015). The patients fractured to happened 2 months prior to P1 first appearing, meaning the patients gait has been asymmetric and there has been greater plantar pressure applied for a period of time. During the normal gait cycle the centre of pressure progresses along the plantar aspect of the foot, from the heel at heel strike to the toes at toe off (Mouhsine et al., 2004). Plantar fasciitis has also been linked to a higher arched foot, this is due to a higher foot arch lacking the mobility needed to absorb ground reaction forces, which means the forces from heel strike to mid stance increase the load to the plantar fascia (Bolgla & Malone, 2004).

Plantar Fasciitis is a common orthopaedic problem which affects a wide range of adult athletes, with 10% of this occurrence being in runners (Chandler & Kibler, 2007). It is a known syndrome which is the result of repeated trauma to the plantar fascia from its origin at the medial tubercle of the calcaneus (Bolgla & Malone, 2004). There is no specific mechanism to plantar fasciitis as this is mainly known to be an over use injury, but can sometimes be found in the older population between 40-60 years of age, this is due to age resulting in a gradual reduction of the collagen, water content and elastic fibrous tissue (Yanbin, Haikun, Xiaofeng, Wanshan, & Shuangping, 2015).  Plantar fasciitis is also commonly found in people with dropped arches (Flat footed), high arches or an abnormal gait (Mendes, 2016). Further factors linked to plantar fasciitis are decreased ankle dorsi flexion, increased metatarsal pressure and forefoot pronation during gait and prolonged periods of weight bearing, this could mean that the patients occupation as a traffic warden has contributed due to the long hours of walking and standing (Hansberger, Baker, May, & Nasypany, 2015). Work related weight bearing occupations are known to be predisposing factors (Puttaswamaiah & Chandran, 2007).

The Plantar Fasciia is a strong supporter of the longtitiudinal arch of the foot, which is a function that it shares alongside other ligaments and muscles of the foot (Kim & Voloshin, 1995). It runs from the tuberosity of the calcaneus to the heads of each metatarsal bone (Brukner & Khan, 2009). Recent studies have found that the plantar fascia is actually an aponeurosis rather than a true fascia and is a vital part of the support mechanism in the foot (Brukner & Khan, 2009). The Plantar Fascia is composed of three segments which all arise from the calcaneus. The clinically most important segment is the part which arises from the plantar aspect of the posteriomedial calcaneal tuberosity and inserts into the toes from the longtitudinal arch of the foot (Brukner & Khan, 2009).

The patient noticed a dull ache in the arch of the foot which came on gradually when there was an increase in running (P1). This is a classic clinical feature found when assessing patients with plantar fasciitis (Brukner & Khan, 2009). P2 is stated as a sharp localised pain and aggravated by immediate running and after 10 minutes of walking. A sharp, localised pain at the heel of the foot is also a common clinical feature found in patients with plantar fasciitis (Tahririan, Motififard, Tahmasebi, & Siavashi, 2012). It is also common for plantar fasciitis to be most painful with initial steps after a period of inactivity and can usually lesson with increased movement throughout the day, the pain can then return or worsen at the end of the day (Tahririan et al., 2012). These clinical findings are present in the current behavioural and symptoms the client is suffering. Plantar fasciitis is found in patients who have had an increase in weight baring activity, which matches up with the patients increase in running. The sharpness of pain 2 subsides in to pain 1 after around 30 minutes of resting the foot, rest is one of the first lines of treatment suggested to patients first suffering with plantar fasciitis, after this has been explored other methods of treatments, such as steroids, shock wave treatment and radiotherapy may be suggested (Puttaswamaiah & Chandran, 2007).

Plantar fasciitis is one of the most common causes of heel pain. It involves inflammation of a thick band of tissue that runs across the bottom of your foot and connects your heel bone to your toes (plantar fascia). PF is usually diagnosed and common with runners, but can also be related to those that are obese. 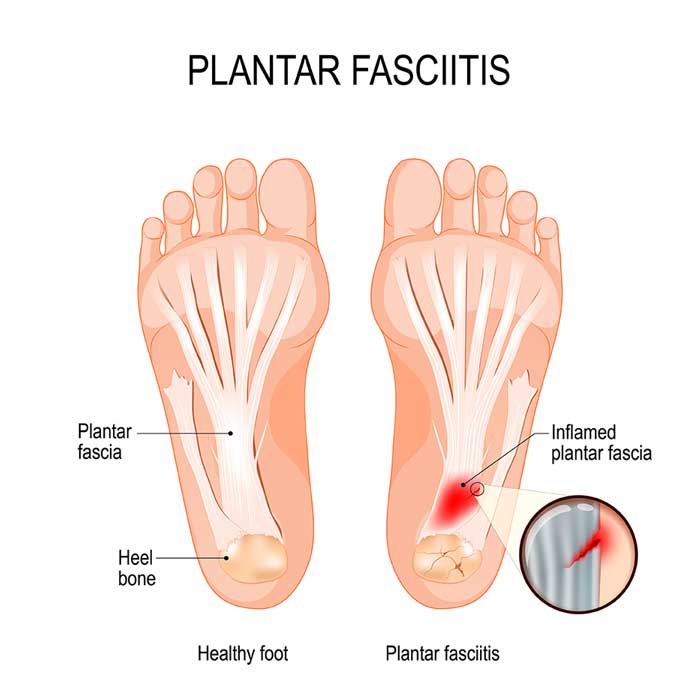 Patient Presented To A Podiatry Clinic

This case study discusses podiatric management of a patient presented to a podiatry clinic with heel pain, upon referral from a General Practitioner. A brief description of the patient’s condit...

What Is Plantar Fasciitis and How Is It Treated?

Well I would like to describe the prevalence and research about the topic in brief in this part as it is important to know why this topic has become an issue now and why do we need to make research on...