Disclaimer: This work has been submitted by a student. This is not an example of the work produced by our Reflective Essay Service. You can view samples of our professional work here.

Reflection has been defined within healthcare as the active process of reviewing, analysing and evaluating experiences, drawing upon theoretical concepts or previous learning, in order to inform future actions (Reid, 1993). A reflective practitioner often reflects on experience and is capable of reflecting-in-action, continually learning from experience to the benefit of future actions (Schon, 1983). This essay is a reflective account based on the recurrence of an incident that took place during my placements in a forensic and an acute ward as part of my mental health nursing training. This reflection is based on Gibbs (1988) definition of reflection which is shown in his reflective cycle in the diagram below. The model will be used to describe the incident, my feelings following the incident and an evaluation of my experience. An analysis of what sense can be made of the situation and thoughts of what else could have been done under the circumstances. The final stage is an action plan for what has to be done if the incident eventuates in future during practice (NHS, 2006). In accordance with the NMC code of conduct (2008) on confidentiality, the names used for the patients are pseudonyms. 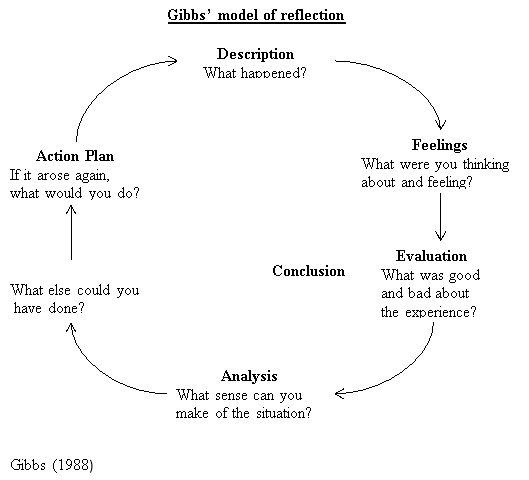 Reflection in nursing is important as it generates practice knowledge, enhances the ability to adapt to new situations, develops self-esteem, leads to satisfaction and improves professional practice (Baird and Winter, 2005, p.156). Similarly, Siviter (2004, p.165) explain that reflection is about gaining self-confidence, identifying when to improve, learning from own mistakes and behaviour, looking at other people’s perspectives, being self-aware and improving the future by learning from the past.

Description of the incident

During my first week of placement at a forensic ward, I was cautioned to be careful of some patients whom the nurses had labelled as ‘difficult’. This was a perception I carried with me till the end of my placement, unfortunately. At one instance I was with a nurse in the office when Yosef, one of the ‘so-called’ difficult patients came to request for the patients phone to make a call. The nurse appeared to be very busy and ignored the patient. As the patient kept knocking at the window, I asked the nurse if I could facilitate the request, but I was told the patient had to wait because he has a habit of always making requests. Yosef walked away after waiting for a few more minutes without help. He was fuming and very upset. I looked at the nurse in despair as I really could not understand what he had to wait for in the first place since in my view, the request could have easily been facilitated. I felt a sense of guilt because at that moment I felt we had let down a service user as facilitators of service. I carried this guilt with me to my second placement which was a female acute admissions ward. I found that here too, the labelling of some patients as ‘difficult’ existed. Bridget, a 59 year old patient who presented as isolative, interacting minimally with peers and staff was also labelled as such. During a ‘plan of the day’ meeting which all patients and staff are expected to attend, Bridget was surprisingly very forthright. She spoke about staff negative attitudes towards patients during the ‘any other business session’. After lunch that day, I decided to have a conversation with her. I started by introducing myself and congratulated her for being outspoken at the meeting, empathising with her on some of the concerns she raised at the meeting. This was meant to make the prospect of engaging her more appealing to her. The conversation took off slowly, but I had to adopt emphatic listening which according to Wold (2004, p.73) is about the willingness to understand the other person and not just judging the person’s facts.

During the conversation, I maintained eye contact in order to express a sense of interest in what she was saying (Caris-Verhallen et al, 1999).

To my surprise, Bridget was participative, and very pleasant throughout the conversation, dispelling the earlier impression I had been given about her. At the meeting that morning, she had mentioned nurses’ insensitivity which I wanted her to elaborate on. In her response, she said

‘Nurses must know that mental illness is invisible unlike physical illness. The therapy is not all about medication, but it is also about relationships that show warmth towards us as patients. But some nurses feel so important and insensitive; their attitude sometimes makes me feel slighted and frustrated. This can easily lead me on to kick off and explode when I shouldn’t’.

She was very thankful and said she felt ‘lifted’ after the conversation.

I had mixed feelings after this conversation; a feeling of disappointment and regret. The disappointment was associated with the fact that there appeared to be a thread of a culture of neglect instead of support at the two wards towards patients. My regret was borne out of the fact that I had allowed some nurses to colour my perceptions of some of the patients. It was clear after this conversation that some nurses have failed to understand and respond to the needs of some patients because they failed to form sound therapeutic alliances with patients which is an essential component of all therapeutic interventions through effective communication Stevenson (2008, p.109).

It is important in a mental health setting that nurses promote a therapeutic rapport with patients that is underpinned by a sense of trust, respect and mutual understanding. According to Harkreader and Hogan (2004, p. 245) these are ingredients that would raise the patient’s self-esteem and personal growth. Even more important, according to Arnold and Boggs (2007, p.200) is the need for effective therapeutic communication which can improve the patient’s ability to function. In order to establish therapeutic nurse-patient interaction, a nurse must demonstrate caring, empathy and trustworthiness (Kathol, 2003, p.33). These involve the implementation of interpersonal skills which Johnson (2008) defines as the total ability to communicate effectively with patients and all those involved in their care. Communication is the exchange of information, and effective communication must involve both verbal and non-verbal communication through the use of gestures, postures, facial expressions, tone and level of volume. I had a feeling that this intervention was a good starting point to develop my communication and interpersonal skills in future.

I realised that through communication, I got to know how some patients feel about nurses and the kind of interaction that they expect would contribute to their therapy. At least, my intervention had helped to alleviate her stress to some extent, calmed her frustration and anger through the use of effective communication skills which underpins the promotion of therapeutic relationships necessary to handle aggression more effectively (Duxbury 2002).

Caring which consists among other things of the provision of comfort, concern and support, the development of trust and the alleviation of stress (Leninger, 1994) is a primary duty of nurses. But arguably, caring can only be demonstrated when people interact with each other and get to understand their needs. My interaction with Bridget was part of my duty to provide nursing care, and this was achieved by putting her at the centre of the conversation by way of making her:

A conducive atmosphere for effective communication was created which enabled her to express her feelings. The Department of Health (DH) (2004) and the National Health Service (NHS) Modernisation Agency (2003) lay emphasis on the importance of patient-focused communication between health professionals and patients. This is seen as vital to achieving patient satisfaction, inclusive decision making in caregiving and an efficient health service. Nursing literature also promotes these concepts as indicative of best practice. For example, McCabe and Timmins (2006) and Charlton et al. (2008) found that, by using a person-centred approach in the interaction between nurses and patients, care outcomes were improved in:

Effective communication is also essential to practice and improving interpersonal relationships in the workplace between professional groups and peers (Grover, 2005)

The nurse is seen as the therapeutic agent in the nurse-patient relationship. This involves the application of effective communication and interpersonal skills which can lead to a sense of safety and protection, improved levels of patient satisfaction and greater adherence to treatment options and increased recovery rates. Furthermore, a successful communication through a patient-centred approach also serves to reassure relatives that their loved ones are receiving the necessary treatment.

My action plan for future clinical practice is to avoid stereotyping of some patients, but to try to understand them as individuals and treat them with the care that ensures recovery. This can only be done by forming therapeutic alliances with them through effective communication and interpersonal skills.

communication styles and their impact on patient outcomes: an integrated literature review. Journal of the American Academy of Nurse Practitioners, 20: 382–8.

Duxbury J.A. (2002) An evaluation of staff and patients’ views of and strategies employed to manage patient aggression and violence on one mental health unit. Journal of Psychiatric and Mental Health Nursing 9, 325–337.

Nursing and Midwifery Council. (NMC). (2008). The Code – Standards of Conduct, Performance and Ethics for Nurses and Midwives. London: NMC

Reid, B. (1993) But we’re already doing it! Exploring a response to the concept of reflective practice in order to improve it’s facilitation. Nurse Education Today. 13 pp. 305-309.

If you are the original writer of this reflective essay and no longer wish to have your work published on the UKDiss.com website then please: