Any opinions, findings, conclusions, or recommendations expressed in this reflective essay are those of the author and do not necessarily reflect the views of NursingAnswers.net. This reflective essay should not be treated as an authoritative source of information when forming medical opinions as information may be inaccurate or out-of-date.

This essay will focus on an emergency situation using the critical reflection of an incident encountered in practice. This will be achieved using Drisdol’s (2007) model of reflection. I have chosen this model of reflection as it is easy to follow the cued questions. A simple and strait forward approach using the “What? So what? Now what?” It can be argued that in comparison to reflective models such as Rolfe et al (2001) it does not lead to deeper reflection about yourself, only the situation. For the purposes of this essay I feel that this tool is more suited to the reflecting of the incident. Throughout the essay the situation will be defined and analysis of my role within the situation will be provided.  I will challenge my thoughts, feelings and beliefs in relation to the situation. Strategies for the development of personal and professional resilience within the emergency care role will be identified.

Get Help With Your Reflective Nursing Essay

At approximately 06:58 at the end of a night shift a category two call came through to respond to a head-on collision on a local A road. The conditions were poor it had been raining all night. I was feeling stressed as it was my first night as a second crew member on the ambulance, the previous four weeks had been supernumerary and secondly, this was my first major RTC (Road Traffic Collision) and I wanted to do a good job.

Once I had parked at the incident, I became overwhelmed by what was going on and failed to make an appreciation of the events. Not drawing on my training and using the SCENE assessment tool (Safety, Casualties, Events, Needs, Equipment) Campbell (2014). This may have been easier to do if the journey to the job had been a less stressful environment. As I approached the incident, I had initially only noticed one casualty, who was sitting on a tyre at the side of the road. I was told to assess the second patient who was trapped and still sitting in their vehicle. We have been trained to assess the patient using the A, B C D E model Caroline (2014). Due to my stress levels, I recognised that I hadn’t been as thorough with this examination as I could have been. I identified that the patient was conscious, and was talking to me, I could see that they were breathing and that they were very pale. I put the Spo2 monitor on to see that their saturation levels were currently at 91%. This led me to cut open their t-shirt at the front and assess their chest injuries. The patient was in pain when I pressed on the anterior chest wall and on Auscultation there were diminished breath sounds on the same side, I suspected that the patient had a flail chest although at this moment I could not see paradoxical chest movement. I recognised that If I had used the Trauma sequence that we have been taught, this would have allowed me to identify the injuries in order of severity. In this instance I had forgotten to immobilise the Cervical Spine (C-spine) I should have applied a C-spine collar along with 02 as part of the “A” assessment.

Benger et al (2009) state that Patients who have the potential to have a C-Spine injury are a common problem for pre-hospital trauma practitioners. Their management can be difficult, can complicate extrication and create a significant workload with transportation, patient management and increased work and pressure for the receiving trauma unit. Pre-hospital spinal immobilisation is predominantly applied to all patients at risk of C-spine injury. This practice has been historically supported in resuscitation guidelines such as Trauma Nursing Core Course (TNCC) (2015), they argue that  a cervical spinal injury (CSI) is suspected in any patient  with multisystem trauma until the patient has a Glasgow Coma Sore (GCS) of 15 and has been fully evaluated for CSI by an experienced physician or has been cleared of spinal injury via radiography or computed tomography (CT). However, this is virtually impossible within the pre hospital setting. International Trauma Life Support (ITLS) (2014) and the Joint Royal Colleges Ambulance Liaison Committee (JRCALC) guidelines (2017) both echo the same findings. JRCALC goes on to say that “All patients with the possibility of a spinal injury must have manual immobilisation at the earliest available opportunity” However, despite the ubiquitous use of C-Spine immobilisation there is very little evidence that it is beneficial.

Once a patient is immobilised, they are held in the supine position, this can create many problems and many studies have noted the harm caused by prolonged spinal immobilisation, this can include airway management, pressure ulcers from lying on hard boards & increased jugular venous pressure resulting from the application of a semi-rigid cervical collar.  REF REF REF

Evidence suggested by Hauswald (1998) that it is the initial impact which will cause the injury, and any further movement is very unlikely to cause any more damage.

Since universal immobilisation is rarely beneficial and carries an element of risk as well as inconvenience there is a clear need for guidelines that rationalise the use of immobilisation. In recent years clinical decision-making tools were developed so that they can identify alert and co-operative patients who do not require C-Spine immobilisation or radiography.

Whilst the one approach over the other is widley discussed, the specificity of both rules is such that they still mandate immobilisation in a large proportion of injured patients.

Benger et al (2009) state that continually alert and co-operative people in the UK have C-spine immobilisation applied consisting of Head Blocks, Collar and Tape immediately after trauma “as a precaution”. They are then usually laid supine, fully immobilised on a spinal board and taken to hospital, as stated previously remaining in this restrictive state for prolonged periods of time pending a clinical decision, but in fact is the majority have no spinal injury at all,

I realised that I was not aware of the situation fully. There were limitations created by lack of equipment as I had only brought the first response bag, this was due to the fact I had been overwhelmed at the beginning of the job.  I was unsure of the methods of extraction and the sequence of treatment. I explained to the Paramedic that this patient had more injuries than we initially anticipated and was at greater risk of deteriorating, due to the extent of his injuries, than the other patient and that he should take over as he had the skills to provide the treatment that the patient needed.

I feel that up to this point I have learned all that I need to know I have passed my OSCE’s, for me the learning is applying this to the pre-hospital environment. I recognise that the majority of this will come from experience and sanitation of stressful situations. Narrowing of the theory-practice gap, within the confines of a supportive learning environment.

The quality of care given was not optimum in the first instance, it was probably as good as it could have been however once the injuries had been spotted and I realised I was out of my clinical limitation as a first-year student, I assisted with C-spine immobilisation, applying the pelvic sling. I must remember that I am no longer a nurse and that I am in a new environment, Dreyfus & Dreyfus (1980) describe this in 5 stages Novice, Advanced Beginner, Competent, Proficient & Expert. Benner (2000) proposes that if you have been a competent practitioner in one clinical area, or as described an Expert you may be a novice in a new clinical area but it won’t take you long to transfer those skills and become proficient in a new area.

Within the previous sections, the implications for practice have been identified and these have and will be used to help develop personal and professional resilience. I feel that I need to have a keen mentor who is dynamic and wants to teach, I left the situation only focused on the negatives – rather than the positive outcomes, I had recognised the patient had the potential for a life-threatening chest injury. I had done all that was expected of me, maybe I’m too tough on myself.

Further information from the hospital days later reinforced that collectively those present had done the right thing, the patient lived despite serious injuries and what I must take away from that is that I was a small part in a big team to ensure the patient survived. 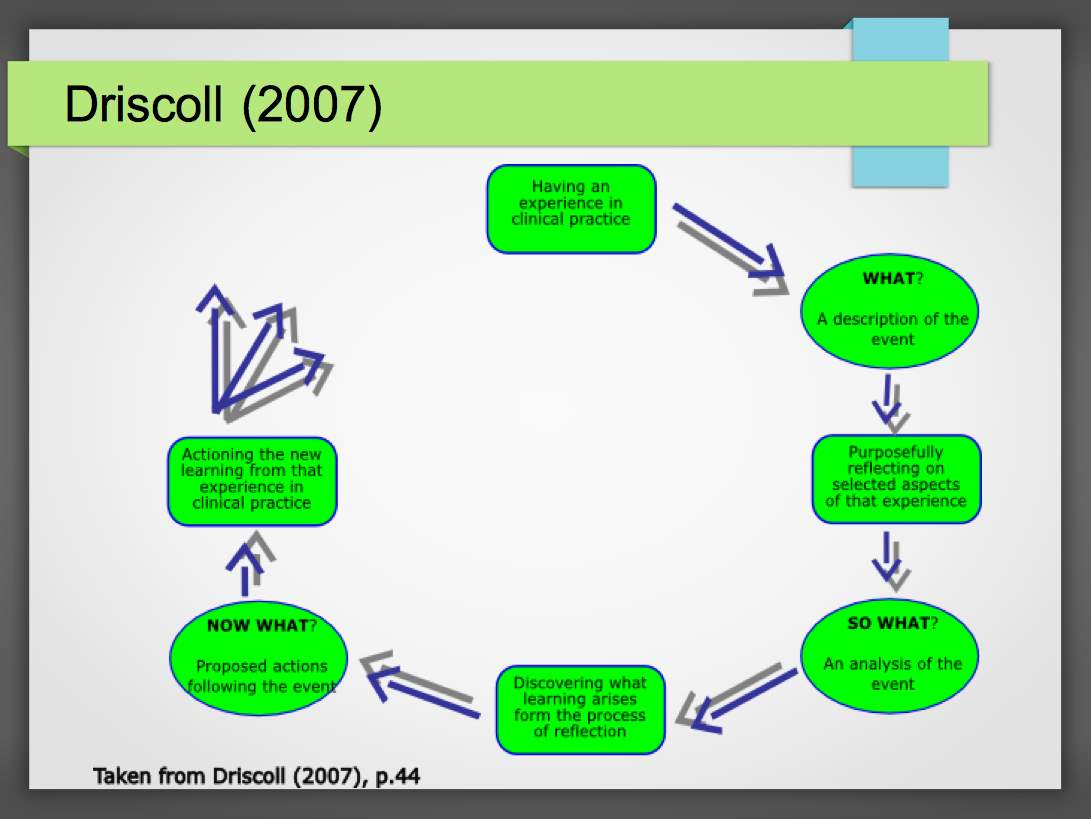 Patient care is not just about the medical aspect of nursing. Patients may experience stress about their conditions, injuries, procedures, surgeries, or recovery. It is important for nurses to treat a patient's physical ailments as well as his or her emotional needs.

How will technology play a role in shaping evidence based health and social care practice?

This essay is a reflective examination of a care episode in the domain of mental health nursing, in relation to the processes of nursing decision making....

If you are the original writer of this reflective essay and no longer wish to have your work published on the NursingAnswers.net website then please: