What is the Rolfe Reflective Cycle?

The Rolfe reflective cycle has the virtue of simplicity and straightforwardness. The model is based on three key questions, as the diagram below indicates: 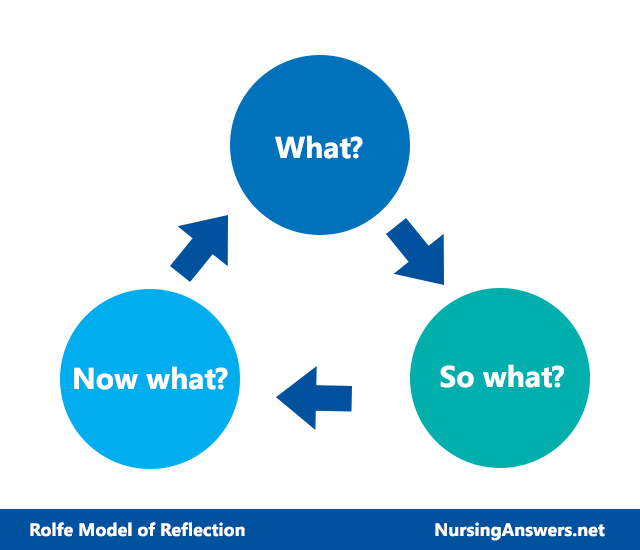 The model was developed initially for nursing and care education, but has become more broad in its subsequent applications, not least because of the clarity of the model and its ease of use.

The three stages of the model ask you to consider, in turn, what happened, the implications of the occurrence, and the consequences for future conduct. The model is cyclic, indicating a continuity. The changes in behaviour or approach which is generated from the reflective thought can then be analysed, and either a further revision made, or else the changes made can be found to have been appropriate.

What are the steps of the Rolfe Model of Reflection?

Rolfe et al. (2010) suggest a series of questions which may spring from the initial three; these may be used to refine reflective thinking and isolate the key elements of the situation or occurrence so that they can be understood in more detail:

This element of the cycle is concerned with describing the event or occurrence being reflected upon, and defining one's self-awareness in relation to it. All questions in this section begin with 'what?':.

This aspect of the Rolfe cycle analyses the situation being reflected upon and begins to make evaluations of the circumstances being addressed. All questions in this section begin with 'so what?':

This is the element of Rolfe's cycle which is concerned with synthesising information and insight, as we move from the previous elements to think in more detail about what to do differently in the future (or perhaps, if it is more appropriate to maintain the previous course of action) and so be prepared for what might be done if similar situations present themselves again. All questions in this element start with 'now what?':

These questions are only suggestions. Not all may be appropriate for all contexts, and thinking of new ones may be part of the processes of reflection being entered into. One tactic which may be of use if to use the questions above as a cheat sheet; remembering the three core questions might be easy, but the follow-up questions can be stored for use as required. Using them as a template for a form on which to compile written reflection can be a useful strategy, as the writing process helps to formalise ideas, and the outcomes may be stored away for later reference, or else as evidence that reflection has been entered into.

The core advantages of the Rolfe model relate to its simplicity and clarity. Reflective tools need to be accessible and useful to the user, and to produce meaningful results. A simple model such as this can support that. Issues related with the model include the idea that if applied only at the level of the three core questions, then a full inventory of the situation being reflected upon may not take place, and the insight produced as a consequence might tend to the simplistic or descriptive.

Rolfe's own writing indicates that is important not only to consider reflection after the event, but reflection in the moment - as an event is taking place - so that immediate corrective action may be considered. For Rolfe, though, this model does not fully articulate the position due to its simplicity, reflection is not only a summary practice, but to be engaged with proactively (Rolfe, 2002).