Any opinions, findings, conclusions, or recommendations expressed in this reflective essay are those of the author and do not necessarily reflect the views of NursingAnswers.net. This reflective essay should not be treated as an authoritative source of information when forming medical opinions as information may be inaccurate or out-of-date.

I will outline a personal experience, which identifies aspects of effective communication. I was a student nurse of about ten weeks on my first placement fourteen years ago. I was working on an acute medical ward when a patient I was looking after became unwell and clammy. I aim to explore my feelings about the events that transpired, and describe what I would do differently if anything similar happens in the future using Atkins and Murphy’s (1994) framework for reflection.

Get Help With Your Reflective Nursing Essay

A patient I will call Mrs Costa, to maintain confidentiality (UKCC 1998), had been on the medical ward for a week. I was allocated to care for her. I reported to the nurse in charge of the ward that day that Mrs Costa was clammy and looking unwell. I was sent to fetch another nurse. I did not know what was going on and there was lots of shouting and staff running about, then the curtains were closed around Mrs Costa’s bed. The other patients were asking what was happening, so I attempted to reassure them that everything was fine and then I just kept out of the way lacking confidence to do or say anything else.

When the phone started to ring I went to answer it. As I was going a patient with immobility problems decided to walk unaided. She managed about four paces before collapsing in the middle of the ward. Two or three doctors came running into the ward and seeing the collapsed patient thought it was for her, they were called. The staff nurse shouted at me in front of the patients and staff for not letting the doctors know which patient they had been called for. I was very embarrassed and felt really stupid.

The staff nurse told me the patient had died and because she had important things to do I had to phone Mrs Costa’s husband and ask him to come to the ward. I said I didn’t think I should be doing it and she told me it was good experience, but not tell her relatives that Mrs Costa had died on the phone. I had no idea what to say at first. The family were Greek and understood very little English. I just remember Mr Costa asking if his wife was all right. I said she was unwell and could he come in as soon as he was able. As Mr Costa arrived on the ward, the shift ended and nobody really discussed the day’s events. I went home and burst into tears.

Having been on placement for only two weeks, I did not have enough knowledge or experience to deal with these events. I remember feeling that I was in too deep I did not know how to help Mrs Costa. I recall how I felt left out and useless in dealing with a cardiac arrest. I am now aware that nurse training in the 1980s was of a low standard and unprofessional (Redfern 1999). I recognise that with experience I would be able to deal with emergency situations and that I did the right thing by reporting Mrs Costa’s condition to the charge nurse. Since the introduction of Project 2000 I am aware that students are not expected to care for patients without the support of qualified staff. I am also aware that a student would not be left alone to tend to the other patients while all the qualified staff assisted the cardiac arrest team.

When I was getting into trouble I felt embarrassed and stupid. Looking back I understand that the staff nurse was probably under a lot of pressure due to the circumstances surrounding the cardiac arrest, but I felt like a naughty schoolgirl. I am also aware of the need for constructive criticism in order to improve my standards of practice (Betts 2002). I do however think that this should be given behind closed doors and in discussion form rather than a row, which appears unprofessional. I felt guilty when the other patient fell. Since reflecting I would make my priority the care of the other patients on the ward and realise that answering a phone would have been less important (Potter and Perry 2001). Mentors are now allocated to students to provide support and guidance including identifying priorities. Spending time with other patients, reassuring them and allaying their fears would be more useful. Again this is something that would come with experience

I also felt very guilty lying to Mr Costa saying his wife was sick when I knew that she had died. I remember the phone call so clearly. I now realise that I should have firmly refused, as I did not have adequate training (UKCC 1992), to make the phone call but listened to a qualified staff member making the call so that I could still gain experience.

I realise that nowadays mentors and charge nurses would help students and other members of staff discuss situations like this to let them reflect on the events. I think that reflective practice would have been useful at the time (Heath and Taylor 2002), as I was unprepared for the events and felt emotionally drained afterwards.

Although this situation is mainly negative it has provided me with some useful experiences for the future. I know that new student nurses require the knowledge and backup of a qualified member of staff or team. Charge nurses should not vent stress on other staff especially in public, but should take them aside and point out what they could do to improve. I now realise how important it is to have a member of staff tending to the patients and reassuring them when an emergency situation takes place (Heath and Taylor 2002). Although I did not like lying to a relative I also understand the importance of not divulging information (UKCC 1996) over the phone and that news of a sudden death could be very traumatic if the relatives were on their own with no support.

In future I would make sure I knew the ward protocol for emergencies. In any new situation I would try to learn as much as I could about that particular speciality to gain confidence. I would use questioning to improve my knowledge in the area thereby improve my understanding. I would take into account other peoples weaknesses. I would reassure the other patients if I were not directly involved in the emergency. In accordance with UKCC guidelines (1998) I would only take part in practices for which I had relevant training. 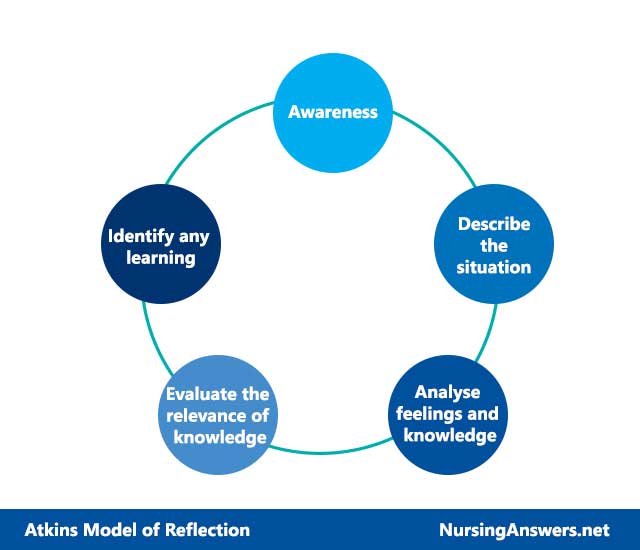 Reason For Aseptic Technique Is To Maintain Asepsis Nursing Essay

Reflection 2 – Aseptic Non-Touch Technique This reflective piece will be about a procedure that took place whilst on placement and will look at infection control whilst doing an aseptic non-touc...

I will outline a personal experience, which identifies aspects of effective communication. I was a student nurse of about ten weeks on my first placement fourteen years ago. ...

The Atkins and Murphy model of reflective practice is based around stopping and thinking about your work and consciously analysing decision to change future action for the better....

If you are the original writer of this reflective essay and no longer wish to have your work published on the NursingAnswers.net website then please: