Stiff-person syndrome is a spectrum of rare autoimmune neurological disorders resulting in muscle rigidity and episodic muscle spasms. The classical case of stiff-man syndrome is characterized by persistent paraspinal and abdominal rigidity, with spams in these muscles triggered by emotional or environmental stimuli (Brown and Marsden, 1999[1]). This syndrome was first described in 1956 by Moersch and Woltman, who presented a disorder in 14 patients described as progressive muscle rigidity and spasms causing falls and gait disturbance (Moersch & Woltman, 1956). Stiff-limb syndrome has traditionally thought to be a subtype of Stiff-Man syndrome (Baizabal-Carvallo & Jankovic, 2015). However, the pathophysiology of both disorders remains poorly understood, and SLS may in fact be a distinct entity from SPS with overlapping features.

Various case reports and literature reviews on the topic have stated that these syndromes occur most often occurs in middle-aged women around 30-50 years in age. These debilitating disorders are usually acquired, progressive, fluctuating, and occur in young women aged 30-50.

Herein we present an atypical case of [REDACTED]. We include a literature review describing the epidemiology, pathophysiology, evaluation, treatment, and prognosis associated with stiff person syndrome, which we hope to assist in the management of this disease.

The case described above is an atypical presentation because, as mentioned previously, this particular syndrome most often occurs in middle-aged women. The patient described was found to exhibit the anti-GAD antibody, which has been implicated with this disorder. Stiff-person syndrome and its variants such as Stiff-limb syndrome are suspected to be caused by auto-antibodies to the GAD enzyme (Ciccoto, Blaya, & Kelley, 2013; Levy, Dalakas, & Floeter, 1999; Raju and Hampe, 2008). GAD is responsible for converting the principal excitatory neurotransmitter glutamate into the principal inhibitory neurotransmitter gamma-aminobutyric acid (GABA). With increased accumulation of glutamate, clinical findings will include hyperreflexia and increased muscle tone. Benzodiazepines are GABA agonists which can assist in enhancing the GABA neurotransmitter at the GABA receptor resulting in muscle relaxation and therapeutic relief for the patient.

Diagnosis and Clinical Variants of SPS

Although the classic form of classic Stiff Person syndrome has no formally accepted criteria, In 2009 Dalakas published a set of criteria for diagnosis of SPS (Dalakas, 2009). [Figure 1]

In contrast to classic SPS, case reports describe patients with  anti-GAD antibodies, and stiffness confined to a single limb, typically one of the lower limbs.  This syndrome has since been described as stiff-limb syndrome (Barker et al.)[2] . One study of 99 patients with some form of stiff-person syndrome described 13 out of 99 patients as having the stiff-limb person subtype of SPS. This subtype tends to have lower levels of anti-GAD antibodies. The initial study found no differences in epidemiology in race or age between classic SPS and SLS. In contrast to classic SPS, which tends to worsen until eventually stabilizing, SLS has a relapsing-remitting course, with the stiffness eventually coming to involve the brainstem and upper limb after 2-3 years[3].

Progressive encephalomyelolitis with rigidity and myoclonus (PERM) is a subtype of SPS which carries the features of classic SPS, but with the addition of autonomic dysfunction and clinical signs of damage to the spinal cord or brainstem. This subtype of SPS tends to be progressive and carries a poorer prognosis[4].

Paraneoplstic SPS is characterized by antiampiphysin antibodies, which may be found in combination with anti-GAD antibodies, or in isolation. In contrast to the other types of SPS, paraneoplastic SPS patients tend to be older, with a median age of 60. (Baizabal and carval, 2015). Clinically, these patients are distinguished by involvement of the arms and cervical region.

In addition to these subtypes, “Jerky SPS” has been proposed by several authors.[5][6]

Classic SPS occurs most commonly in middle-aged females. It has been described as having average age of onset of 41.2 years, with a range of around 29-59 years being most commonly seen, and no apparent racial predilection (Murinson, 2004)[7]. Similar to other autoimmune disorders, it has a greater incidence in females compared to males, at a ratio of around 2:1 (Dalakas et al., 2000; Hadavi et al., 2011). Stiff-person syndrome has been described as a very rare disorder, with some sources reporting an incidence as low as around one in a million (Bhatti & Gazali, 2015). A review of the published literature yields a number of case reports showing stiff-person syndrome being diagnosed in younger patients, and one review suggested this disorder may be underreported and undertreated in the pediatric population (Clardy et al., 2013; Jun et al., 2015; Sanefuji et al., 2013). The demographics of patients affected by Stiff-limb syndrome is similar to that of classic SPS[8]. In contrast, paraneoplastic SPS patients tend to be older, with a median age of 59-60 (Baizabal and Carval, 2015; Sarva et al., 2016[9]).

Stiff-person syndrome is traditionally regarded as an autoimmune disorder with the stereotypic propensity to have increased incidence in those afflicted with other autoimmune conditions. Notably, 30% of SPS patients also have Type 1 Diabetes Mellitus, another autoimmune disorder in which anti-GAD antibodies are central to the pathogenesis of the disease (Manto et al., 2007)[10].

Paraneoplastic stiff-person syndrome is a phenomenon known to occur in cancer patients (McCabe et al., 2004; Badzek et al., 2013). It is estimated that paraneoplastic cases of stiff-person syndrome compose 1-2% of SPS patients. Anti-amphiphysin antibodies are known to occur in many types of cancer. It is a rare antibody. It is associated with a wide range of neurologic symptoms. Only  10% of women and 4% of men with anti-amphiphysin antibodies were diagnosed with stiff-person syndrome[11]. SPS was more likely in patients with isolated anti-amphiphysin antibodies. Typically the cancer associated with paraneoplastic SPS is breast cancer (Murinson and Guarnaccia, 2008; Folli et al., 1993[12])[13]. Other associated cancers include lung cancer, thymoma, and renal cell carcinoma. [Thymoma references here]

Interestingly, the initial researchers who described it used the terminology ‘stiff-man syndrome’. The index case of this syndrome, described by Moersch and Woltman, was that of a male patient and some of the earlier literature reviews on the topic seem to portray and equal incidence in males and females (Moersch & Woltman, 1956; Ali et al., 2011). Over the several decades following the initial description of stiff-person syndrome in 1956, it became apparent that it had a significantly greater incidence in female patients. As a result, it came to be referred to as ‘stiff-person syndrome’ instead of ‘stiff-man syndrome’, the terminology initially used to describe it (Ali et al., 2011; Blum and Jankovic, 1991).

The GAD enzyme functions to convert glutamic acid into GABA. The most commonly accepted proposal for the mechanism of SPS involves autoantibodies to GAD, resulting in a paucity of GABA, impairing GABAergic pathways leading to the clinical symptoms of stiffness and spasm.  The GAD enzyme is found to occur in two isoforms, GAD65 and GAD67. The antibody associated with stiff-person syndrome specifically targets the GAD65 isoform, and is found in about 60% of patients diagnosed with this disorder (Ciccoto, Blaya, & Kelley, 2013; Solimena et al., 1990). Functionally, the GAD65 isoform appears to generate excess GABA when more than the basal amount provided by the GAD67 isoform is needed – for instance, during times of stress or exertion (Ciccoto, Blaya & Kelley, 2013). Given the ubiquitous role of GABA throughout the nervous system, it is not surprising to note that antibodies against enzymes producing GABA have also been implicated in other disorders, including progressive encephalomyelitis with rigidity and myoclonus (PERM) and limbic encephalitis (Dayalu and Teener, 2012).  It has been suggested that the presence of antibodies against GAD may exist in high levels in stiff-person syndrome, along with other disorders, which assists in diagnosis but their presence and concentration does not play a role in degree of disease severity or response to medication (Alexopoulos & Dalakas, 2013).

There are three major categories of drugs used to treat SPS. GABA agonists, namely benzodiazapines and baclofen, attempt to stimulate GABA receptors which are putatively bereft of their ligands.

The first therapeutic agents used to combat stiff-person syndrome were the benzodiazepines. Diazepam was first used in the 1960s to relieve symptoms such as muscle rigidity and spasticity, which are associated with stiff-person syndrome (Howard, 1963; Bhatti & Gazali, 2015). Today, benzodiazepines such as diazepam and clonazepam along with other GABAergic options including gabapentin, valproate, and levetiracectam continue to be the preferred first-lien options due to their ability to control severe spasticity and rigidity. Along with oral diazepam, oral baclofen may also be used as a first-line option to reduce spasticity (Bhatti & Gazali, 2015). For particularly severe and refractory cases, intrathecal baclofen delivery has also emerged as a viable treatment option (Newton et al., 2013). More recent trials have proposed using rituximab, a monoclonal antibody against a B-lymphocyte structural component, for treatment of stiff-person syndrome as it is effective against other autoimmune disorders and certain types of cancers (Bhatti & Gazali, 2015). A number of recent case reports have detailed the utility of rituximab against refractory and sever cases of stiff-person syndrome (Fekete & Jankovic, 2012; Qureshi & Hennessy, 2012; Sevy et al., 2012; Zdziarski, 2015). 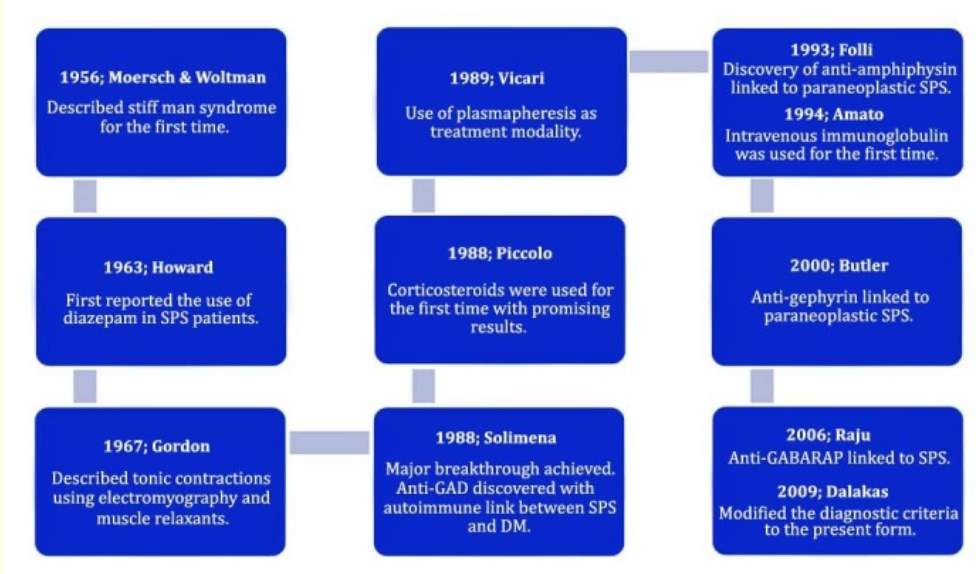 Check for autoimmune disease in all SPS patients.

In contrast, SLS is more relapsing-remitting. PERM tends to result in rapid death.