Merle Mishel strives to enhance patient outcome and care during uncertainty by identifying uncertainties and addressing them. Mishel has a Bachelor of Science degree in nursing from Boston University and Master of Science in nursing from the University of California. She also has a Master of Arts degree in psychology and a postgraduate degree in psychology (Bailey & Stewart, 2014). Mishel had an experience with uncertainty via her father. Mishel’s father had colon cancer and his experience influenced her to develop the theory of uncertainty in illness. Mishel’s father was not able to understand what was happening to him and was unable to cope with the disease. Mishel’s father tried to control some aspects of his life while dealing with uncertainty of his disease. Mishel started focusing on uncertainty after she began her doctoral study in psychology. Her dissertation focused on the development of uncertainty measures and testing of the measures (Polit & Beck, 2008). She developed the theory of uncertainty in illness to understand how patients can deal with uncertainty caused by their illness. Mishel described the patients experience as ambiguity over uncertainty. She developed a scale to test perceived ambiguity in illness and later renamed the scale to Mishel Uncertainty in Illness Scale (MUIS) (Bailey & Stewart, 2014). Middle range nursing theories provide clear guidance for nursing practice and they are less conceptual and abstract as compared to other theories (Alligood, 2014). The uncertainty in illness theory is considered a middle range theory as it fits into the definition above. Mishel used scientific and empirical evidence to develop the theory and the MUIS tool (Bailey & Stewart, 2014).

Mishel used different sources to develop the theory of uncertainty in illness. She combined research in different areas including managing dangerous events, cognitive processing and uncertainty. She used studies published before on stress and coping that examined uncertainty as a stressful event. She reevaluated her previous concept and used existing models from Warburton (1979). She used various different other studies and research such as Budner’s (1962) study which analyzed a certain event as the cause of uncertainty. Mishel significantly considered the stress-coping-adaptation method of Lazarus and Folkman (1984) in her theory. (Bailey & Stewart, 2014). These theorist’s views influenced how she viewed uncertainty as a cognitive state instead of an emotional response, and helped her to examine uncertainty as a complex cognitive stressor.

Mishel has discussed the metaparadigm concepts in her theory including the environment, health, nursing and person. A person is an individual who experiences uncertainty in diseases. The uncertainty affects interpersonal relationships as the body changes. The environment refers to the healthcare environment where the theory is applicable. Uncertainity caused by diseases affects a patient’s health and patients should develop coping mechanisms to cope with the uncertainty. Healthcare professionals use MUIS tool to identify areas of the disease that are causing uncertainty. Then they address the areas to help the patient develop coping mechanisms that will enhance his health. Nursing is aimed at helping patients and families comprehend uncertainty in diseases and learn new ways of life. Nurses play a critical role in helping patients understand uncertainty in diseases and cope (Liehr & Smith, 2014).

Mishel made various assumptions when developing the theory. She assumed uncertainty is a cognitive state that represents insufficiency of a current cognitive schema to support the interpretation of events related to a disease (Polit & Beck, 2008). Besides, she assumed that uncertainty was a neutral experience not harmful until it is appraised as harmful. She also assumed that individuals can cope with uncertainty in diseases and hence improve their outcome and quality of life. She also claimed that people do not function in an equilibrium state and they need time to concentrate on self. Thus, they are unable to incorporate the uncertainty into their view of life if there is not enough time (Liehr & Smith, 2014).

The uncertainty in illness schema consists of different themes related to the main concepts. The themes are antecedents of uncertainty, appraisal of uncertainty and coping with uncertainty. The antecedent theme comprises of stimuli frame, structure providers and cognitive capacity. Stimuli frame refers to the form and structure of the stimuli an individual perceives. The stimuli frame consists of symptom pattern, event knowledge and event congruence (Polit & Beck, 2008). Symptom patterns imply the extent to which symptoms have a pattern. Event familiarity is the extent to which a situation has recognized cues. Event congruence implies the consistency between the expected disease related events and the events experienced. Cognitive capacity and structure providers impact the stimuli frame. Cognitive capacity refers to a person’s ability to process information (Liehr & Smith, 2014).

The development of nursing theories should follow a logical process and must be in line with the underlying objectives (Polit & Beck, 2008). Concepts and sub concepts should be clearly stated and described consistently without ambiguity. The uncertainty in illness theory is well developed as the concepts are clearly presented and easily understood. After Michel reexamined her concept in 1990 the uncertainty of illness theory became deductive due to her using qualitative studies and chaos theory. These research studies lead her to change the direction of the theory. The theory now states that people’s uncertainty is always changing due to major life events and illnesses (Bailey & Stewart, 2014).

Relationship to Research, Education and Advanced Practice in Nursing

The theory of uncertainty in illness can be applied in different areas including education, nursing research and advanced nursing practice. The theory is used in advanced nursing practice to address uncertainty in different diseases and hence patient concerns regarding their diseases. This improves their outcome and quality of life. Patients learn how to cope with uncertain events by understanding the disease process. The theory can be applied in nursing research as it helps researchers understand experience of patients with chronic and terminal diseases (Polit & Beck, 2008). The uncertainty in illness theory has been used in studies that focus on uncertainty related to cancer to understand sources of uncertainty in the population how to resolve them. It also used in education to equip nursing students with knowledge and skills required to understand disease uncertainty and coping mechanisms.

Merle H. Mishel’s theory of Uncertainty in Illness was initially focused on the person’s ability to resolve uncertainty. Although, she reevaluated and added the notion that uncertainty may never resolve, but will become part of the person’s identity and affect their perceptions and quality of life. The uncertainty in illness theory is essential in transforming patient care and experience. The theory helps patients understand uncertainty related with their illness and address the causes of uncertainty. They developing coping skills and hence are able to cope with the disease. The concepts are clear and well described. The theory can be used in nursing practice, nursing research and education as it is easy to understand and apply. References 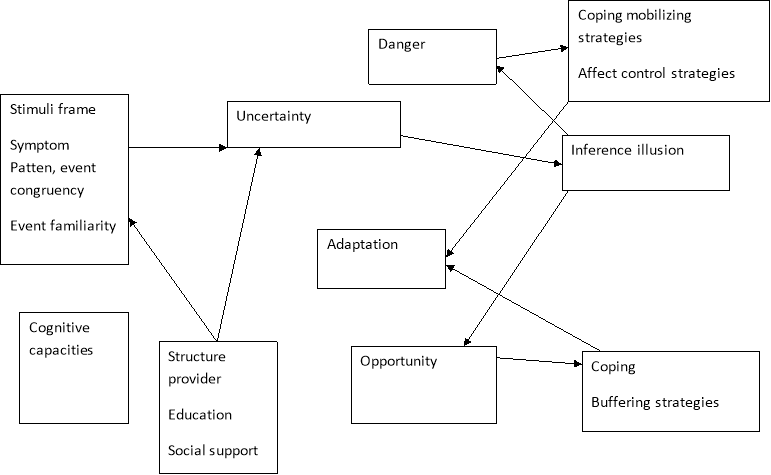 The objective for the development of a theory is to illustrate, define, or systematize knowledge in a professional field of study. Theory can be utilized in all facets of nursing and promotes the advancement of education, knowledge and care in the profession.

According to Rafieian-Kopaei, Setorisi, Doudi, Baradaran, & Nasri (2014) atherosclerosis is a result of hyperlipidemia and oxidation, and it has been a principal factor of mortality in developed...

The chosen theory for this paper is Madeleine Leininger’s Culture Care Diversity and Universality care theory. This theory focuses on the fact that different cultures have different caring behavior and different health or illness values, belief, and pattern of behavior....

Defining Cancer Cancer is a group of diseases involving out-of-control growth of abnormal cell growth in a part of the body. Ancient Evidence of Cancer The world’s first recorded case of cance...