Maternal smoking during pregnancy is a key public health concern in the United States. There are few instances in which environment has such a large effect on development as during pregnancy, which is considered a critical period.2 Prenatal factors have a large influence on a baby’s growth and development, and can lead to health consequences that affect them for their whole lives.2

There is plenty of evidence proving that the effects of smoking during pregnancy increases the risk of pregnancy complications such as fetal death (spontaneous abortion), fetal growth restriction (reduced birth weight), placental complications, and premature delivery.1,2,3 Smoking also increases the risk of sudden infant death syndrome (SIDS) after birth.3 “In 2002, 5%–8% of preterm deliveries, 13%–19% of term infants with growth restriction, 5%–7% of preterm-related deaths, and 23%–34% of deaths from sudden infant death syndrome (SIDS) were attributable to prenatal smoking in the United States.” 3 Children of mothers who smoked during pregnancy also have increased risk for disease, health problems, and behavioral/ psychological issues later in life.2

There is evidence of a dose-response relationship, that increasing amount of cigarette usage is related to increased risk of defects and complications.1,2 It has been shown that nicotine crosses the placenta, and concentrations of nicotine in the baby can be as much as 15% higher than concentrations in the mother.2 There is also evidence that women who smoke during pregnancy have an increased risk of having a baby with two or more defects.1

In the US there are approximately 120,000 babies born each year with a birth defect, which is 3% incidence per year.1 Smoking while pregnant has been proven to be associated with significantly increased risk for a variety of defects including cardiovascular, musculoskeletal, gastrointestinal, facial, and more.1 Many of these birth defects are quite serious, result in physical and psychological illness, require several painful and expensive surgical treatments throughout the infant’s lifetime, and may still result in a disability.1 In the US the estimated total expenditures for treating birth defects was approximately $2.1 billion in 2003.1 In 2004 approximately $122 million in healthcare costs for infants were attributed to maternal smoking.3 Thus it is a significant cost on the healthcare system for women to smoke while pregnant.

Other studies have found behavioral and psychological associations between smoking during pregnancy and the child’s abilities later in life.2 One study suggests that maternal smoking negatively affects a child’s speech and language development.2 Another study found an association with decreased intelligence in the child at age 4.2 There are also several studies that suggest an association with increased externalizing disorders, such as conduct disorder and attention deficit/hyperactivity disorders (ADD/ADHD).2 Cognitive function has been shown to be adversely affected in through decreased attention span, response inhibition, memory, impulsivity, receptive language, verbal learning and design memory, problem solving, speech and language, school performance, and auditory processing.2

It is important to also keep in mind that secondhand smoke after birth also increases a baby or child’s risk for respiratory disease and infections, immune system problems like asthma and allergies, ear infections, sudden infant death syndrome (SIDS), and cancer later in life.2,3

Maternal smoking remains a common problem.2 It is reported that as many as 14% of pregnant women in the US continue smoking during pregnancy.1

For most states the prevalence of smoking hasn’t changed much over time; however from 2000 to 2010 smoking prevalence actually decreased in parts of the US.3 In a subgroup of ten states the prevalence of smoking during pregnancy decreased from 13.3% to 12.3%, and smoking after birth decreased from 18.6% to 17.2% over the 11 year period.3 Sites that showed a significant decrease in maternal smoking from 2000 to 2010 include Colorado, Illinois, Minnesota, New Jersey, New Mexico, New York, New York City, Utah, Washington, Wisconsin and Wyoming.3 New York City achieved the highest annual percentage decrease.3 Unfortunately in Louisiana, Maine, Mississippi, and West Virginia the prevalence of smoking during and after pregnancy actually increased over the time period.3 (See Figures on next page showing maternal smoking prevalence in US by time and location) 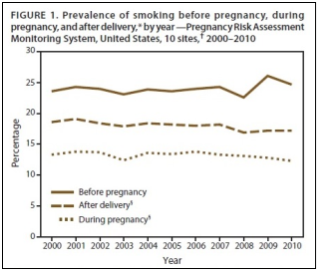 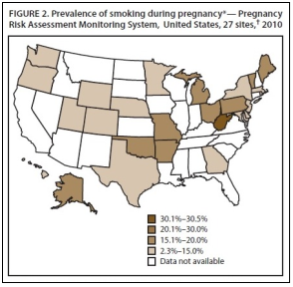 In 2010 prevalence of smoking during pregnancy ranged from 2.3% in New York City to 30.5% in West Virginia, with an average of 10.7% of women that reported smoking during the last 3 months of pregnancy.3 At the time none of sites had yet achieved the Healthy People 2020 goal of reducing prenatal smoking prevalence to 1.4%.3

In 2010 the percentage of women that had smoked but quit before the last trimester had increased significantly, especially in Illinois, Massachusetts, Michigan, and New Jersey.3 Unfortunately in Louisiana the number of women quitting smoking while pregnant actually decreased.3 In 2010 the percentage of women that quit smoking while pregnant ranged from 34.3% in West Virginia to 74.6% in New York City, with an average of 54.3% of women that reported quitting smoking during pregnancy.3 All sites with data available had achieved the Healthy People 2020 goal of increasing smoking cessation during pregnancy to 30%.3

In 2010 the prevalence of smoking after birth had decreased significantly, it ranged from 4.1% in New York City to 37.5% in West Virginia, with an average of 15.9% of women that reported smoking 4 months after delivery.3

In Iowa, from 2007 to 2012 the trend overall has been an average of a 15% decrease in women that have smoked before and during pregnancy.4 Unfortunately, despite this downward trend, there still remain 15% of women in Iowa that smoke during their first trimester, and 12% of women that smoke throughout their entire pregnancy.4 Awareness is helping, and there is now 41% of women in Iowa that smoked before pregnancy but quit while pregnant.4

Prevalence of smoking during pregnancy varies widely depending on maternal age, ethnicity, education, and health insurance coverage.1,2,3 Priorities can be highlighted based on this demographic information. In the US on average 20% of women less than 25 years old smoke while pregnant, compared with only 9% of women 35 years or older.1 Also 22% of women with less than 12 years of education smoke while pregnant, compared with only 6.5% of women with greater than 12 years of education.1 Some studies have even suggested that the percentage of women under age 20 that are smoking while pregnant has increased.2

Based on the demographic information presented in the Table in Appendix A, groups that need the most assistance are identified. It is easy to see a trend that women age 20-24, that are American Indian/Alaska Native, had 12 or less years of education, and had Medicaid coverage (low income) were more likely to smoke before, during, and after pregnancy.3 Women that were less than 20 years old, Asian/Pacific Islander, had greater than 12 years of education, and had private insurance coverage were all more likely to quit during pregnancy.3 (See Appendix A for Table showing maternal characteristics in prevalence of prenatal smoking)

Smoking during pregnancy has been a continued problem within the US. Maternal smoking has been proven to increase risk for many birth defects.1 Educational information encouraging women to quit smoking before or during pregnancy needs to be stressed.1 Educational and policy efforts also need to be targeted especially toward women under age 24, with 12 or less years of school, in lower socioeconomic groups, because they are more likely to smoke while pregnant.1,3

Efforts to reduce prevalence have only been mildly successful.3 In 2010 none of the states with data available had achieved the goal of reducing prevalence of prenatal smoking to 1.4%.3 If trends continue at the current slow rate then it could take another 100 years to reach that goal.3 Current tobacco control efforts in most states are probably not adequate to be able to reach national goals in reducing the prevalence of smoking during pregnancy.3 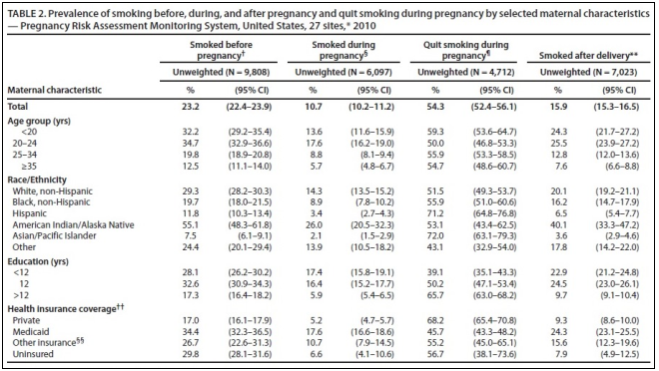 “Summary of the meta-analyses for maternal smoking in pregnancy and birth defects. The pooled ORs are shown for each body system and specific defects (total number of malformed cases in brackets). CI: confidence interval” 1 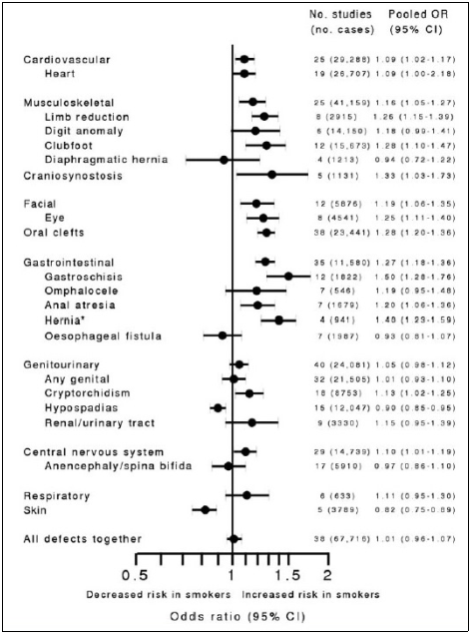 Smoking is an extremely crucial public health issue which is considered to be an immediate and serious threat to many developing countries across the globe. Being one of the most significant determinants of increased rate of mortality and ill-health throughout the world, smoking is still a preventable epidemic.

Smoking as a Public Health Issue

It is now a matter of common public acceptance that smoking causes ill health. This statement can be backed up by huge amounts of authoritative literature (Dobson et al 1999) (Smoking Kills 1998) ...

Many health promotion initiatives had been undertaken everywhere. However, the most important is that such initiatives should establish certain aspects of characteristics based on best practice in ord...

Links Between Stress and Cigarettes