Study on Process mapping, Waiting Time Based on Six Sigma Concepts in OPD

This study focuses on to identify the various procedures at the outpatient clinic as well as to investigate the possible operational problems that may lead to excessive patients’ waiting time. A patients’ experience in waiting time will radically influence his / her perceptions on quality of the service. The study was carried out in Fortis Memorial Research Institute, Gurgaon (Haryana) for three months. The subjects were outpatients who came to the outpatient clinic in FMRI. Data was analysed using the six sigma approach.Significant reduction in waiting time was achieved in the outpatient services of department by using the six sigma approach. Doctors were on time in OPD to reduce the delay in the OPD. Patients were coordinated well to the doctors.

Patients’ waiting time has been defined as “the length of time from when the patient entered the outpatient clinic to the time the patient actually received his or her perception”.

Process mapping is a workflow diagram to bring forth a clearer understanding of a process or series of parallel processes. It views the system from the patient perspective following their journey across organisational boundaries. It helps staff understand how complex and confusing processes appear to the patient. It is organisation specific. It is diagnostic and used as a basis for redesign, actively involving frontline staff in the process. (Shows how things actually are). 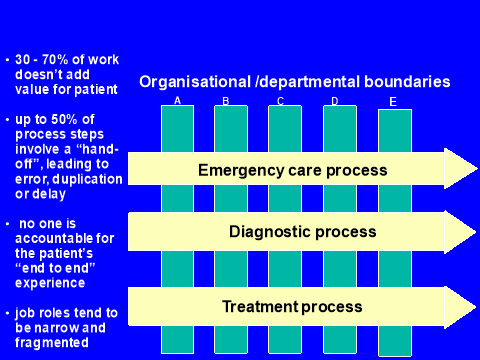 The two main objectives of the study were:

This research was done at the outpatient clinic in FMRI. The research methods chosen were to:

Defined as the total time from registration until consultation with a doctor.

Defined as waiting time from the moment patients submit a clinic card or referral letters at the counter until getting a call from the counter. During this time the payment process and record classification are made. Registration time is part of patient’s waiting time.

First introduced by Motorola in 1986, Six sigma is a method to measure the quality of a process to fulfil customers’ needs which approaches perfection. Data and statistical analysis were used to identify defects in processes and reduce variation. With Six sigma, defects in a process can be measured by identifying the best method to eliminate defects and approach ‘zero defect’.

Six Sigma specifies a very high standard of quality achievement. It utilizes a variety of existing project management, statistical and analytical tools. Several toolkits of the six sigma were applied during this study:

Statistical image shows characteristics of collected data. At this level, data will be presented using the best presentation tools such as histogram, pie charts or others.

Chart shows description and sequence of the process done.

Diagram shows the relationship of a cause that gives rise to a certain problem.

1.Total waiting time for the consultation.

Several variables monitored in this study were data on patients’ waiting time work process, number of doctors available and number of staffs at the registration counter.

Three major collection methods were used in the study:

The Six Sigma method which consists of the five steps of:

(DMAIC) is the roadmap to achieve the objectives of this study.

Study was carried out in the GENERAL OPD FMRI Outpatients of 50 per day.

1. Process Map-Flow Chart that shows description and sequence of the process done.

2. Cause and Effect Diagram – Diagram that shows the relationship of a cause that gives rise to a certain problem.

4. Descriptive statistics- Analysis of data that helps describe, show or summarize data in a meaningful way.

This is the first step that refers to defining the goals of the project. Process improvement goals may be aimed at increasing market share, the output of a particular department, bringing about improved employee satisfaction as well as customer satisfaction and so on.

The goal has to align the patient demands and the strategic goals of the organization. Data mining methods can be used to find prospective ideas for project implementation.

In other words, businesses are designing a road map for achieving the targets and goals of the organization.

Three months retrospective data from the department indicates that in August 2013 only 66.64% of patients were seen within 15 minutes by the physician. In September 2013 this decreased marginally to 59.68% and in October 2013 this was found to be 61.68%.

For understanding perception of patients on OPD waiting time, VOC was collected from 150 patients in the OPD.

1. Did you take an appointment for OPD visit?

2. How did you get the appointment? Through telephone or direct?

3. Are you satisfied with the way your phone call was handled?

4. What instruction was given by the counter staff at the time of appointment/arrival?

5. How did you feel at the reception?

6. How much time it took at the reception, to attend you?

7. At what time you were asked to report at the counter and when did you reach the OPD reception?

8. Did any staff brief you regarding the workflow in OPD?

9. How long you have been waiting in OPD?

10. Did any information regarding waiting time in OPD was given to you, at the time of appointment?

11. How much time it took for you to interact with doctor after your arrival?

12. Are you aware of the existing appointment system in FMRI?

13. What is your perception on waiting time in the hospital?

14. What would you suggest to reduce waiting time in OPD?

How long have you been waiting in the OPD for Consultation (Observations): 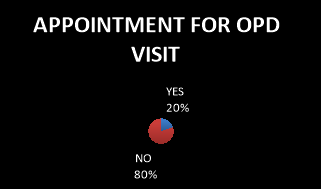 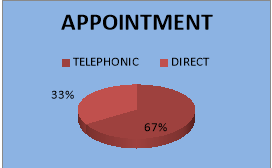 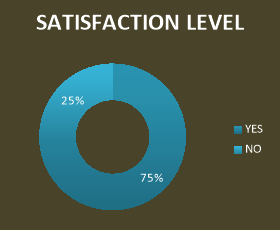 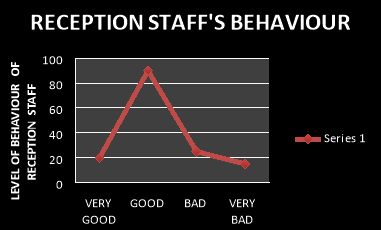 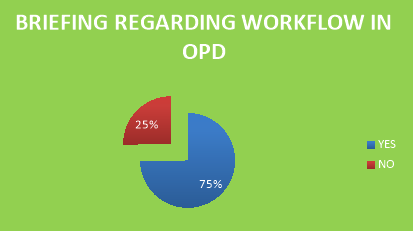 Fig.9: Briefing Regarding Workflow in OPD 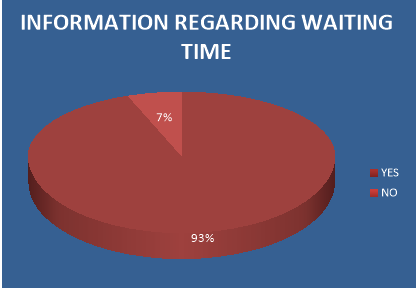 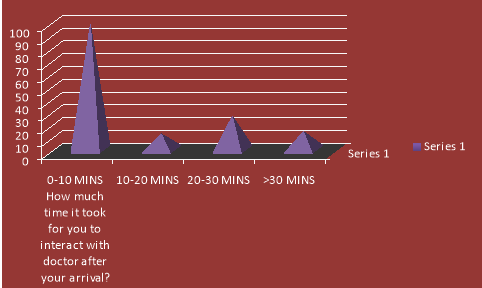 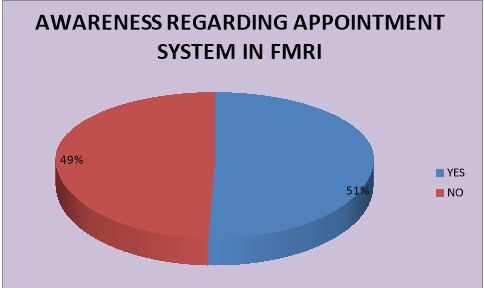 This phase refers to the analysis of the existing system with various measurement techniques for the defects and levels of perfection that exist. In this step, accurate metrics have to be used to define a baseline for further improvements.

This helps in understanding whether any progress has been achieved when process improvements are implemented.

To identify High level process map the SIPOC has been done.

The various processes involved in the particular project have been described in detail in flow chart: 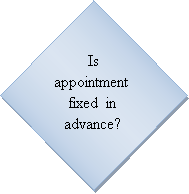 The analyze phase was undertaken to determine any disparity that may exist in the goals set and the current performance levels achieved. The understanding of the relationship between cause and effect is necessary to bring about any improvements, if needed. Brainstorming session was carried out and all the causes were listed in the affinity diagram. The Fish Bone Diagram was prepared.

CAUSE AND EFFECT DIAGRAM: 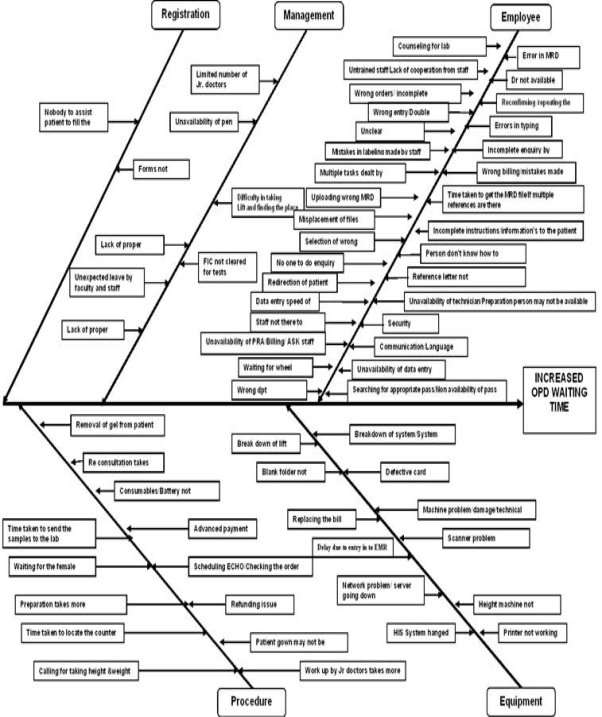 Fig.15: Cause and effect diagram

Causes were then ranked on the basis of severity and occurrence as per criteria given.

Table.5: Ranking of causes on the basis of severity and occurrence

A modified Failure Mode and Effects Analysis (FMEA) were carried out for Occurrence and Severity only. The top Risk Priority Number was considered for further analysis, using 5WHY.

As per analysis of data, following observations were made: 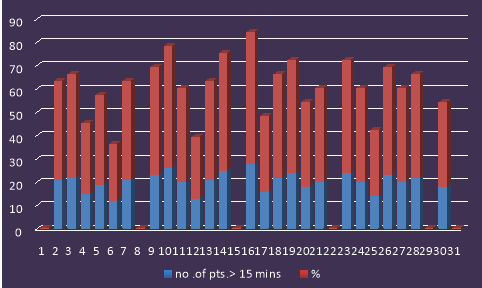 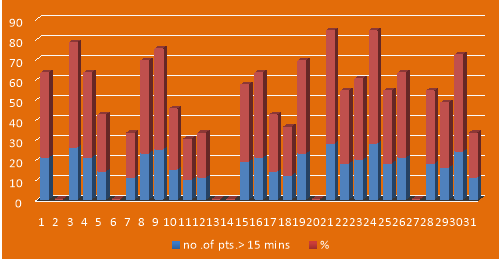 In this month slight improvement was observed as the average time, no. of patients seen more than 15 minutes and its %age decreased slightly.

This was due to:

It was observed when compared the data of three months that: 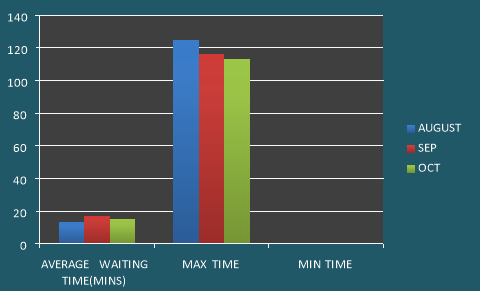 The solutions with their respective Causes are shown below:

Control phase is the last step in the DMAIC method. This phase is about sustaining the changes made in the Improve phase to guarantee lasting results. The best controls are MONITORING, appropriate CHECKS and balance the quality system for the long run.

Conclusion: Significant reduction in waiting time was achieved in the outpatient services of the department. Doctors were on time in OPD to reduce the delay in the OPD. Patients were coordinated well to the doctors. Further data analysis will help to monitor and control the waiting time and process flow in the OPD.

Assessing behaviour through observation can be vital in understanding the cause and the impact certain behaviours are having on an individual as well as those around them. In addition, observation can determine what behaviour is the issue if the issue has not been predetermined.

Introduction Assessing behavior through observation can be vital in understanding the cause and the impact certain behaviors are having on an individual as well as those around them. In addition, obse...

Assessment and Observation of the Gastrointestinal, Urinary and Reproductive Systems

The gastrointestinal, urinary and reproductive systems are the key systems located in the abdominal region. It is important......

So far in this module, you have studied the processes involved in observing and assessing each of the major body systems....