Gastric cancer provides a good alternative to show the association of pathogenesis in the gastrointestinal tract and dietary modification. High salt intake and n-nitroso compounds have been identified in having a very strong relationship in the promotion of gastric cancer. The synergy between Helicobacter pylori and these dietary modifications elevates the chances of gastric cancer. Salt consumption leads to the inflammation of the stomach lining and it increases the colonisation of Helicobacter pylori which can cause the upregulation of iNos, COX-2 and CagA which cause increase the risk of gastric cancer. Similarly, H.pylori increases the chances of the formation of the carcinogenic n-nitroso compounds via increase nitrosation. Also, the reduction of Vitamin C, which acts as a free radical scavenger causes an increase in nitrosation which can ultimately increase gastric cancer. Ultimately, dietary modifications do play an integral role in the pathogenesis in gastrointestinal cancer.

Gastric cancer is the fifth most common cancer in the world. (1) It is the third most common cause of cancer mortality due to the overall late symptoms being identified and therefore, lower prognosis.(1) Therefore it is imperative that dietary modification is implemented so that there is early prevention of gastric cancer and a higher life expectancy. Helicobacter pylori (H. pylori) is a known carcinogenic, which increased the risk of gastric cancer via chronic inflammation. (2) H. pylori situates in the stomach and this is a strong link between diet and gastric cancer as it can directly affect the microenvironment of the stomach.

Sodium is one of the most important electrolytes in the modulation of plasma osmolality and body fluid volume. (3) The regulation of sodium in the body was much easier 5000 years ago, as the dietary sodium levels were much lower than modern times; Salt is now more exposed in our diet and it is often used in preservation techniques. (4) understanding some of the mechanism in which salt is used in the development in food may allow the association between gastric cancer and salt to be identified; high sodium concentrations in the stomach has been associated with inflammation and mucosal damage; this is turn may cause an increase in mutation and increase proliferation of cells leading to gastric cancer. REF

Humans contain two types of gastric mucins: surface mucous cell mucin (SMCM) and gland mucous cell mucin (GMCM).(11) A study by Hidaka et al (12), showed that H.pylori only attached to the surface mucous epithelial cells. The penetration of only one type of gastric mucin is due to the upregulation of the GMCM against the H.pylori infection. (13) This displays that there are two mechanisms in which salt can potentially increase the risk of gastric cancer. A direct mechanism is the increase in cell proliferation due to the mucosal injury by the H. pylori. The indirect mechanism is to provide support in the immediate environment of the stomach to increase colonization of H. pylori. A study by Furihata et al (14) showed that there was damage to the gastric tissue when hypotonic NaCl solution was administered. Although the damage was temporarily and the tissue was back to its’ original state within one-two days, it is important to consider that prolonged exposure to high salt intake will cause excessive damage and therefore increased the risk of carcinogenesis in the gastric tissue.

Kato et al. (6) demonstrates that salt does support gastric malignancies in a dose-dependent factor when H. pylori is present. Although this result was achieved in an animal study, this relationship can be used to express the idea that a reduction in salt and salty food can decrease gastric cancer in humans. Therefore, considering a study by Tsugane et al. (15) up to 12% of salt is consumed in dietary sources such as pickled vegetables, preserved fish and salted fish. The synergistic behaviour of salt with H. pylori exposes the importance in the prevention of a high dietary salt intake to prevent the onset of gastric cancer.

D’Elia et al (16) showed that moderately-high and high salt intake increased the chances of gastric cancer by 41% and 68% respectively, when compared to low salt intake. Japanese individuals who were habitually inclined to consume salt-rich foods had a higher risk of gastric cancer; with the consumption of pickled foods, salted fish and processed meats, there was an increased risk of 27% , 24% and 24% respectively. (16)

A study showed that the association with individuals having a gastric cancer screening is lower in individuals with higher salt intakes.(17) Therefore, in this epidemiology study, it can be identified that the Korean population may not be aware of the consequences of a high salt diet; Therefore, a better delivery in the consequences of dietary salt intake may lead to more gastric cancer screening and potentially show an indirect decrease in the rate of gastric cancers in the population. 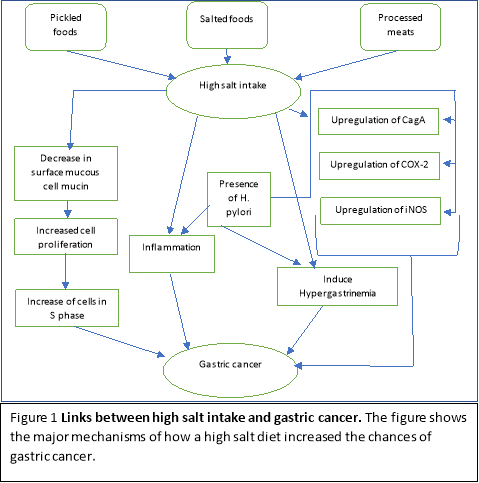 The mechanisms which link nocs and nitration described allows a powerful insight into some of the potential processes that are modulated in the prognosis and progression of gastric cancer; this allows us to identify the food sources that may potentiate the advancement of gastric cancer and therefore allow dietary modification to prevent gastric cancer. There are several mechanisms which allow nitrosation and consequently the formation of nocs to take place. Firstly, nitrosation is more likely to take place in a more acidic stomach. (21) There is also synergy of nitrosation at low vitamin C levels. (21) Secondly, inflammatory conditions are developed in the stomach in the presence of H. pylori when nitrosation takes place. (22) Lastly, Individuals who are exposed to high concentrations of nocs have a higher potential risk in acquiring gastric cancer (18).

A study by Jakszyn et al. (23) has shown an increase in faecal nocs with the consumption of red meat. This has been observed by the reaction involving haemoglobin and myoglobin which reacts with nitric oxide to produce nocs which exist in the upper gastrointestinal tract. The results show that H. pylori infection increases nitric oxide due to the bacterial response being counteracted by macrophages; this will in effect cause an increase in nitrosation due to the high nitric oxide concentrations and subsequently allow high colonisation of h pylori. The red meat therefore does increase the risk of gastric cancer and this is also supported by other studies. (24) Having high levels of vitamin C may potentially prevent the onset of gastric cancer as it acts as a free radical scavenger and it enhances the mucosal formation; This reduces the synthesis of nocs and inhibits the optimum environment for H. pylori reducing cell proliferation of H. pylori. (25) The H. pylori counteracts this by causing inflammation of the stomach, causing a decrease of in the secretion of vitamin C in the lumen. (25) This exemplifies the synergistic relationship between reduced vitamin C levels and H. pylori in causing gastric acid; hence an increase in vitamin C should theoretically reduce the colonisation of H. pylori as well as the formation of nocs.

A study by Xu et al. (18) shows the association between gastric cancer and nocs accurately using cofactors from endogenous nitrosation. The precursors of nocs such as nitrite, nitrate and 4 nocs were measured in urine. Firstly, the results showed a strong significant positive correlation with urinary nitrate and the risk of gastric cancer risk with negative igG antibodies for H. pylori. (18) Secondly, there were also increased levels of nitrite with the presence of H. pylori. (18) Finally, it also showed a link between alcohol consumption and some specific nocs. (18) The results highlight that there is a direct relationship between the formation of nocs and pathogenesis of gastric cancer. The addition of H. pylori synergistically allows the advancement of nitrosation and formation of nocs in the stomach. It also showed that decreased alcohol consumption may lead to a decrease in the formation of gastric cancer as there would be less carcinogenic nocs forming. Interestingly, this study has also shown a significantly inverse association with pickled vegetables and urinary nitrate levels. (18) Pickled vegetables contain nitrate reductase which can reduce nitrate to nitrite; Thereby causing a reduction in the nitrosation process, leading to less nocs synthesised. (18) Ultimately, this study shows the significant relationship between exogenous dietary sources such as red meat, alcohol should be limited to prevent gastric cancer. 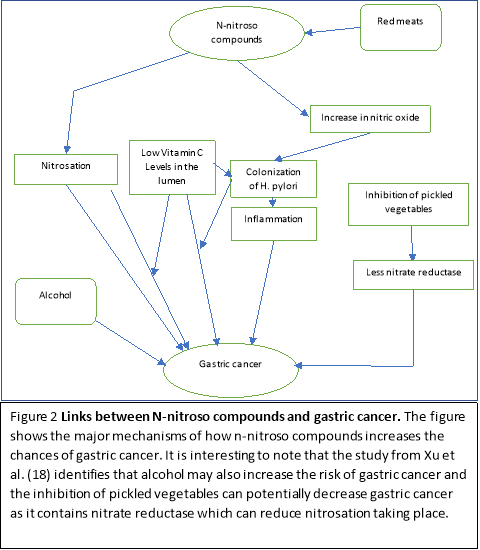 The association between dietary modification and the prevention of gastric cancer is very high. Avoiding processed meat such as red meat which are high in n-nitroso compounds and food sources which are high in dietary salt can prevent damage to the mucosal lining of the stomach and prevent mutations. Interestingly, pickled vegetables have specifically shown many implications in the prevention of gastric cancer. Although, pickled vegetables do have a high salt intake and therefore would increase the risk of gastric cancer by inflammation of the mucosal lining, it does contain a bacteria called nitrate reductase which is able to reduce the processes of nitrosation, enabling less carcinogenic n-nitroso compounds to form and therefore, a decrease the number of mutagenic events in the stomach. This highlights variation of dietary modification as they may play a different role in different mechanistic pathways in the gastrointestinal tract. Dietary modification consequently can provide a strong supportive role in the prevention of gastrointestinal cancer by the effects seen in the microcosm of the stomach.

22. Mirvish SS. Role of N-nitroso compounds (NOC) and N-nitrosation in etiology of gastric, esophageal, nasopharyngeal and bladder cancer and contribution to cancer of known exposures to NOC. Cancer Lett. 1995;93(1):17-48.

Cancer comprises several diseases that are characterized by abnormal cell growth. There are over one hundred varieties of cancer usually named for their cell or organ type. Cancer is the root cause of death across the world evidenced by WHO which established that around one in six deaths all over the world are due to cancer.

Significance of Drug Repurposing in the Future of AML Treatment

The significance of drug repurposing in the future of AML treatment A Layman’s Literature Review for the project “Characterisation of repurposed drugs as novel therapies in Acute Myeloid Leukaemia...

Laryngeal Cancer: A Review of Treatments

Laryngeal Cancer: A Review Laryngeal cancer is one of the most common cancers of the head and neck in the United States (Baird, Sung, Beadle, & Divi, 2018; Mannelli, Lazio, Luparello, & Gallo,...

I decided to write my research paper on Leukemia because my uncle who lived in Bend, OR found out that he had Leukemia. This news was devastating for our family including my uncle. His health started ...