Vagus nerve stimulation involves a surgical procedure to implant an electrical pulse generator in the chest and attach electrodes to the vagus nerve in the neck. A pulse generator is similar to a pacemaker. It isabout the size of a pocket watch and weighs about 25 grams (g).

How does vagus nerve stimulation work?

The pulse generatoris surgically implanted in the chest just under the skin. This generator is programmed to intermittently transmit small electrical signals via a wire to the vagus nerve in the neck. We do not understand why electrical stimulation of the vagus nerve is effective at preventing seizures. It may be related to changes in the brainstem and thalamus, or the electrical stimulation may intercept the abnormal brain activity associated with seizures.

and software are used by the doctor, to read and alter the stimulation strength and frequency. After the generator is first implanted, the usual starting settings are 30 seconds of stimulation every 5 minutes. The strength of the electrical signal usually starts at 0.25 or 0.5 milliamperes (mA) and is then increased every few months by 0.25 mA. The frequency of the stimulation can also be adjusted, to come on and off more frequently.

Patients are also given a magnet, which acts as a switch for the generator. When a patient senses the beginning of a seizure, she can pass the magnet over the pulse generator to deliver extra stimulation. For some people, this extra stimulation can stop a seizure from progressing, shorten a seizure, or reduce the intensity of the seizure. The magnet can also be used to turn the stimulator off temporarily.

The battery life of the generator is about six years, after which the device can be replaced. This will require another surgical procedure, similar to the first2.

What and who is vagus nerve stimulation best used for?

Vagus nerve stimulation has been used to treat partial and generalized seizures in both adults and children. It is considered in the following cases:

Vagus nerve stimulation usually reduces seizures but does not often eliminate them completely. Usually it is used together with medication.

Use in the Pediatric Population

A large group of patients with intractable epilepsy are younger than 12 years, including children with Lennox-Gastaut syndrome, Dravet syndrome, and other difficult-to-treat epileptic conditions. Morris and colleagues[3]recently provided an evidence-based guideline for VNS in children that is based on a review of off-label use.

In 13 class 3 studies involving 470 children with partial or generalized epilepsy, 55% had > 50% seizure reduction with VNS. Similarly, in 4 class III studies of 113 children with Lennox-Gastaut syndrome, 55% had > 50% seizure reduction. Mood studies were not available for children. (In 2 class 3 studies of 31 adults with epilepsy, significant improvements in standard mood scales were observed.) Children were 3.4 times more likely than adults to develop an infection at the VNS implantation site.

What is the procedure?

A medical evaluation is necessary to determine if this is a case that may be successfully treated with vagus nerve stimulation.

The procedure itself takes about one hour. One cut about 5 cm long is made on the left chest wall to implant the pulse generator. Another cut about 5 cm long is made in the neck, through which flexible platinum electrodes are attached to the vagus nerve. Because the vagus nerve also goes to the heart, the generator will be turned on in the operating room so that the surgeon can make sure the device does not interfere with the heart. For the same reason, the electrodes are almost always placed on the left vagus nerve, which has less critical influence on the heart.

Your child may be sent home on the same day or kept overnight for observation. You and your child will be taught how to care for the incisions before discharge1.

After the pulse generator is implanted, the doctor will start the stimulation, using a wand attached to a laptop computer. The doctor will begin with a low dose of current, given for 30 seconds every five minutes. The strength and duration of the stimulation will be slowly increased, at subsequent doctor visits, to achieve optimum seizure control. The stimulation is delivered automatically, 24 hours a day.

Your child will also be given a special magnet for use with the pulse generator. Children who experience auras (a feeling that signals the onset of a seizure) can use the magnet to give an extra burst of stimulation, which may reduce or eliminate an imminent seizure. You can also use the magnet if you see that your child is about to have a seizure. The magnet can also be used to turn off the pulse generator temporarily and to check its operation. The doctor will make sure that you and your child understand how to use the magnet before you leave the hospital.

Your child will need to continue taking his medications. The dosage will be kept constant for several months while the generator’s output current is slowly increased. Once the current has been increased to its optimal level, your child’s doctor will consider reducing medication and will discuss a new schedule with you.

The benefits of VNS seem to increase over time. In one study:1

For people who can sense when they are about to have a seizure, turning on the VNS using their hand-held magnet can sometimes prevent the seizure. It may also shorten a seizure already in progress.

Studies show that VNS may also be effective in children. VNS improved independence, mood, and learning in some children3.

What to Expect After Surgery

Children who are implanted with a VNS usually return home the same day following their surgery. Sometimes a hospital stay of one night is necessary2.

Regular monitoring is required to check the generator and battery and to make sure the treatment is working well and is not uncomfortable. The battery life of the generator is about six years, after which the device may be replaced. This will require another surgical procedure, similar to the first

The vagus nerve stimulator is considered safe. Mild side effects occur in some people when the device stimulates the nerve. The most common side effects include:

In children, vagus nerve stimulation may cause increased hyperactivity2.

For more than 15 years, VNS has proven a useful adjunct to pharmaceutical therapy in adults and children with intractable epilepsy. In an evidence-based guideline, Morris and colleaguesconcluded that VNS “may be considered” for treatment of seizures in children with epilepsy, including those with Lennox-Gastaut syndrome (level C). Improvements in mood, as well as a sense of control over seizures provided by the magnet, may be added benefits. Adverse events, such as postimplant infection and lead fracture, may occur more often in children than in adults1.

As with many pediatric therapies, VNS is not FDA-approved for children. Nonetheless, VNS represents a potentially effective and nonsedating treatment option and should be considered for children with intractable epilepsy. 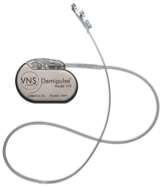