The purpose of this research investigation is to respond to the claim ‘Overuse of antibiotics is contributing to the emergence of MDR bacteria.’ With initial research, a broad question ‘How have antibiotics become resistant to certain bacteria’s over time?’ was developed based on the initial claim. This was further refined to specifically consider Vancomycin Resistant Staphylococcus aureus (VRSA). A summary of this refinement and the specific question is detailed below.

Staphylococci aureus commonly known as S. aureus, is one of the Staphylococcus genus of bacteria. Although no absolute origin is known, theories speculate that it evolved from pre-historic soil bacteria (Freeman-Cook, 2007). The origins of the word are that, Staphyle means “bunch of grapes” in Greek and Aureus means “gold” in Latin, named because the bacteria grow in large yellow like colonies that are known to be approximately 1 mirco-diamter each in size (Freeman-Cook, 2007).

To prevent antibiotics from causing their demise, bacterium can engage many different avoidance mechanisms (ReAct, 2014). These can include: modification the cell wall to decline antibiotic entry, creating enzymes to inactivate the drug and altering the structure of the drug target. Accumulation of resistance genes often form small plasmids  pieces that can be transferred between bacteria in a single transaction. When infections occur within a multidrug resistant bacterium, they are hard to treat due to the little or even no, treatment options  (ReAct, 2014). Multidrug resistance also facilitates the spread of antibiotic resistance. When the MDR plasmids are transferred and shared among other bacteria, the resistance capabilities increase  (ReAct, 2014). Environments such as hospitals, where bacteria is continuously exposed to antibiotics, MDR is favourable and selected by bacteria to their further make is spread further with more prevalence.

The glycopeptide antibiotic Vancomycin, often thought as the drug of “last resort”, was introduced clinically in 1958 for the treatment of gram-positive bacteria (Freeman-Cook, 2007). The use of this drug dramatically increased within the last 20 years, mainly due to the increasing resistance of Methicillin resistance in S. aureus. Unfortunately, reports of the antibiotic resistance have already surfaced. Vancomycin resistance among Staphylococci was developed in laboratories even before the drug was in clinical use. It works by preventing that formation of bacterium cell walls. It achieves this by binding to the subunits of the enzyme. This binding them prevents the bacteria from correctly binding with the PBP’s (Penicillin-binding proteins). Therefore, the structural integrity if the cell wall is compromised and wakened, causing the bacterial cells to fall apart.

Thus, leading to the development if the following research question ‘How does the increase use of Vancomycin contribute to the resistance of Staphylococcus aureus (golden staph)?’

S. aureus is one of the most common causes of life-threating bacterial infections (Freeman-Cook, 2007). It was only recognized 125 years ago, and has been deadly ever since. It culminates on the skin and mucous membranes of warm-blooded animals, therefore making humans a primary carrier (Freeman-Cook, 2007). Nasal membranes especially provide the perfect habitat for the colonies, due to their warm and moist environment. The bacterium was described by Anton Rosenbach, a German physician and microbiologist, as non-motile (not capable of movement) bacterium, that grows in perfectly spherical grape like clusters. It is “estimated that 10-40% of healthy human adults have colonies of S. aureus growing in their noses, without their knowledge,” because many carries who host the colonies on their skin are not affected (Freeman-Cook, 2007). The skin is the body’s first line of defence. Therefore, a breech in the skin, such as a cut, provides entry for the bacteria, that is already inhabiting the skin (Freeman-Cook, 2007). The harmful bacteria are also found in water, decaying matter and on just about any surface, it is extremely durable which makes it extremely hard to kill. Known for growing in the wide temperature range of 15-45 degrees Celsius, the disease can lie dormant for years before beginning to grow, if growth conditions are not ideal (Freeman-Cook, 2007).

The bacterium possesses an extremely thick cell wall, one of its resistance mechanisms, that increases its resilience to treatment. The increased thickens allows for it to exist within the highest internal pressure of any type of bacteria. Both is these factors make it very hard for antibiotics to get within the cell walls to the disease (Freeman-Cook, 2007). It also produces a wide range of virulence factors (proteins that help the bacteria sustain infection and damage human host cells) that then help the bacteria attach to the host cells and attack, preventing the immune system from fighting the bacteria. The bacterium then establishes an infection in one area of the body and release toxins into the bloodstream, instantly becoming harder to treat (Freeman-Cook, 2007). The early overuse and misuse of Penicillin created a series of resistance problems. Most strands of Staphylococcus are now resistant to the antibiotics: Penicillin and Methicillin. Attempts were made to modify the structures of multiple existing antibiotics to  therefore create a new drug. The result was Vancomycin that is now one of the most important antibiotics ever created (Freeman-Cook, 2007).

Vancomycin-resistant Staphylococcus aureus (VRSA) is a rare, multidrug-resistant bacterium (Freeman-Cook, 2007). VRSA arises when Vancomycin resistant genes (e.g. the van A operon. Which codes enzymes that result in modification or elimination of the Vancomycin binding site) from Vancomycin-resistant enterococci (VRE) is transferred to S. aureus (Freeman-Cook, 2007). All VRSA strains have arisen from highly transmissible Methicillin resistant S. aureus (MRSA) strains, which was the previous drug of choice for the treatment of S. aureus. The drug is a large molecule was not well absorbed orally. Due to that it requires an intravenous injection to be effective (Freeman-Cook, 2007). Unfortunately, the nature of the drug made it not soluble enough to make it an easy task. The drug has side effects that include: possible kidney damage and hearing loss. The continuation of research on the antibiotic has led too news and easier way of preparing the drug so that the negative side effects and risks is decreased.

After the emergence of vancomycin-resistant enterococci (VRE), bacterial varieties of the genus Enterococcus immune to the vancomycin antibiotic, there has been significant concern regarding the impending large outbreak of vancomycin-resistant S. aureus (VRSA) due to the increased vanA gene transmitted from VRE (Howden, 2010). VRSA due to the acquisition of the vanA gene from VRE was first reported in 2002 in the US (Johnson, 2015). Till toady, only nine cases of VRSA have been reported from the United States, with two additional cases, one from India and one from Iran (Howden, 2010). This then indicates that although the mechanism of resistance is significant, it is not evolving or spreading rapidly, ceasing some potential concern (Zheng, 2018).

Bacterial resistance to different types of antibiotics has been globally emerging over recent years. The study was carried out to investigate the rate of Vancomycin-resistant S. aureus at a tertiary medical care centre in Kerman, Iran. In the cross-sectional study, 250 samples with positive culture for coagulase-positive S. aureus, taken from suspected infection sites of patients admitted to different medical wards at Bahonar hospital from 2009 to 2011, were looked at (al, 2015). The results were that 9.2% of S. aureus isolates were found to be vancomycin-resistant. There was also no significant different in the rate of resistance between females and males (8 versus 12.9%). The rate of resistance was shown to be slightly higher in post-surgical compared to medical ward patients (al, 2015). It found that across the wards, general surgery housed the largest number of patients with VRSA (20%) (al, 2015). It appears that the increasing use of the antibiotic: Vancomycin, in non-series infections may contribute to the overall emergence of S. aureus isolates that are Vancomycin resistant. 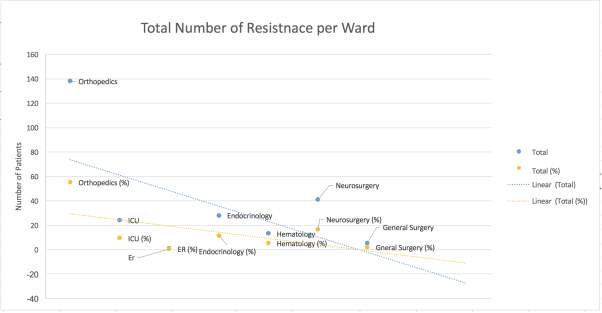 Figure 1. Scatter plot of total resistance in each ward

S. aureus is known for being a significant hospital and community-associated pathogen causing a wide range of infectious diseases (CDC, 2010). Since the prevalence of resistance to various antibiotics has progressively increased, the selection of an effective agent against S. aureus remains limited (al, 2015). A study in Pakistan investigated the antibiotic resistance pattern in clinical isolates of S. aureus and noted that only one isolate is Vancomycin-resistant (CDC, 2010). This study however, found that 23 out of 250 S. aureus varieties (9.2%) to be Vancomycin-resistant (Table 2). The noteworthy disparity in results could have been caused from several contributors including but not limited to, the environmental difference in infection control and antibiotic usage policies.

The study achieved in Iran and research on the topic provide evidence that the rate of prevalence towards Vancomycin in clinical isolates of S. aureus is at a relatively high rate of 9.2% and growing steadily (al, 2015). The worldwide spread of MDR MRSA clones during the past serval decades has led to the frequent use of Vancomycin to treat S. aureus infections, which in turn leads to the increasing about of VRSA (Gardete, 2014).

The role of Antibiotics for Treatment of Acute Otitis Media in Prevention of Subsequent Development of Acute Mastoiditis in Children Introduction Acute otitis media (AOM) is considered to be one of t...

The Rise of Antibiotic Resistance

Abstract The discovery of antibiotics was one of the most groundbreaking innovations of medicine. This healthcare staple, responsible for treating diseases that once were incurable, is n...

Introduction In the 1960’s the Advance Nurse Practitioner role was initiated as an action plan initiative to resolve the epidemic of having enough accessible primary care physicians in underser...