The World Economic Forum report claimed that ‘The world will run out of effective antibiotics.’ (Boseley, 2014) The article discussed broadly the link between the overuse of antibiotics and how it would cause antibiotic resistance and superbugs in hospitals, resulting in the death of lots of people. The report concluded that antibiotic-resistant bacteria are the greatest risk to human health, as the bacteria is growing stronger and acquiring resistance to multiple drugs. (Spellberg, Bartlett, & Gilbert, 2013)

The use of antibiotics for human therapy is one of the most successful episodes in medicine. However, the consequences of overusing antibiotics are well-studied for human pathogens, which have evolved and acquired resistance along the past decades. (Nathan & Cars, 2014) It was stated that this evolution is of concern for the treatment of bacterial infections and for several medical practices that require the use of antibiotics to avoid the frequently associated infections. (Publications, 2013)

According to the Nature Research journal, novel antibiotics are always needed, owing to the inevitable development of resistance that follows the introduction of antibiotics to the clinic. it was also stated that when a new class of antibiotics is introduced, it is effective at first, but the bacteria will eventually develop resistance to the drug. (Walsh, 2003)

‘Will the overuse of antibiotics in the treatment of bacterial infections lead to an antibiotic resistance and the emergence of Superbugs?’

Antibiotics are bacteria-fighting drugs that have been an important part of modern medicine for nearly a century. (NIH , 2014) The effectiveness of antibiotics is measured on their ability to destroy or inhibit the growth of many harmful bacteria that cause infections, allowing for a longer and healthier life. Antibiotics work by attacking the parts that a bacterium needs to grow, survive and replicate. Each type of antibiotics acts in a different way; some antibiotics interfere with the outer casing of the bacteria, which is called a cell wall, while others may interfere with the mechanisms that allow the bacteria to reproduce. (Bennett & Luntz, 2006)

Antibiotic resistance occurs when the bacteria survive and reduce the effectiveness of antibiotics, making them completely ineffective by rapidly evolving to create ways of neutralising them, pumping them out of their cells, or preventing them from entering in the first place. (Cooper & Blaskovich, 2012) Bacteria have a capacity to replicate quickly, modify their genetic makeup and acquire new genes producing more resistant bacteria, which allow them to protect themselves from antibiotics. (Edwards-Jones, 2013) When bacteria become resistant to several types of antibiotics, they are often called ‘superbugs.’ Superbugs are strains of bacteria that are increasingly causing infections. The emerge of superbugs due to antibiotic resistance is a serious risk for global public health. (Browne, 2013)

Evidence
Antibiotics have helped to control and destroy many of the harmful bacteria. (NIH , 2014) However, the use of antibiotics is the single most important factor leading to antibiotic resistance and the emerge of superbugs worldwide. (Edwards-Jones, 2013) (Paper 28)

Source: (Australian Commission on Safety and Quality in Health Care, 2016)

Moreover, the studies indicated that antibiotics are used needlessly in residential aged care facilities. It indicated that 11.3% of the residents were on antimicrobials. However, only 4.5% had a suspected or confirmed infection. The study demonstrated the misuse of antibiotic in the Australian hospitals. On any given day in 2014, 38% of patients were being prescribed an antibiotic. However, 24.3% of these prescriptions were noncompliant with the guidelines and 23% were considered inappropriate. The inappropriate use of antibiotic included the over-prescribing of antibiotics needlessly, prescribing the wrong type of antibiotics, or prescribing for the incorrect duration. (AURA, 2016) Furthermore, According to the Centres for Disease Control and Prevention, up to one-third to one-half of antibiotic use in humans is unnecessary or inappropriate. (Mayo Clinic , 2018)
In 2014, 46% of Australians had at least one antimicrobial dispensed to them under the PBS or the RPBS. The overall rate was 23.8 DDD/1000 inhabitants/day, which is an increase compared with 2013, but a decrease compared with the peak in 2008, as shown in Figure 2. (AURA, 2016) 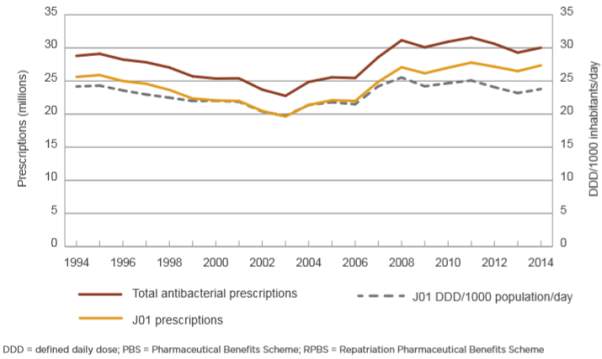 Figure 2: Volume of Antimicrobials Dispensed under the PBS/RPBS per year, 1994-2014

Source: (Australian Commission on Safety and Quality in Health Care, 2016)

According to the Centres for Disease Control and Prevention (CDC), Methicillin-resistant Staphylococcus aureus infections are among the highest of all antibiotic resistant threats. MRSA causes a range of illnesses, from skin and wound infections to pneumonia and bloodstream infections that can cause death. (CDC, 2013) It was also stated that resistance to methicillin, which is caused by the misuse of antibiotics, is of concern. (NIH , 2014)

Additionally, S. pneumoniae is a major health problem and is the leading cause of bacterial pneumonia and meningitis. It is also a major cause of bloodstream, ear and sinus infections. S. pneumoniae has developed resistance to drugs in the penicillin and erythromycin groups, such as amoxicillin, which are used in the treatment of several bacterial infections. According to CDC, Pneumococcal disease causes 4 million disease episodes and 22,000 deaths annually in the United States. (CDC, 2013)

Among children, Pneumococcal ear infections are the most common type of pneumococcal disease, causing 15 million infections. Moreover, over 600,000 adults are hospitalized with pneumococcal pneumonia. It was stated that, in 30% of severe S. pneumoniae cases, the bacteria are fully resistant to one or more clinically relevant antibiotics, which mostly results from the misuse of antibiotics, that are often prescribed needlessly. Invasive pneumococcal disease happens when the bacteria invade parts of the body that are usually sterile, causing death in most cases. The majority of deaths occur among those 65 years or older. (CDC, 2013)


Furthermore, TB is one of the most common infectious diseases and a huge cause of death worldwide. TB is caused by the bacteria Mycobacterium tuberculosis and is commonly spread through the air. It can affect any part of the body, but the bacteria is most found in the lungs. Drug-Resistant TB can be complex and challenging to treat. The major factors driving TB drug resistance are incomplete or wrong treatment, short drug supply, and the lack of new drugs.  (CDC, 2013)
Figure 5: Reported Cases of Drug-Resistant TB (In thousands) 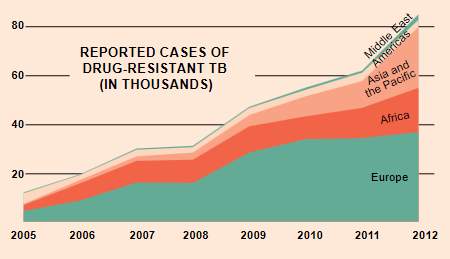 According to CDC, In most cases, TB can be treatable with the available 1st line TB drugs. However, Multidrug-Resistant TB (MDR) can show resistance to at least Isoniazid (INH) and rifampicin (RMP), which are the essential 1st line drugs. (CDC, 2013) In some cases, TB is Extensively Drug-Resistant (XDR) which is resistant to almost all drugs used to treat TB. (WHO) As shown in the Figure 6, the collapse of the effective pharmaceutical antibacterial groups has led to a dramatic increase in the emergence of drug-resistant TB infections. 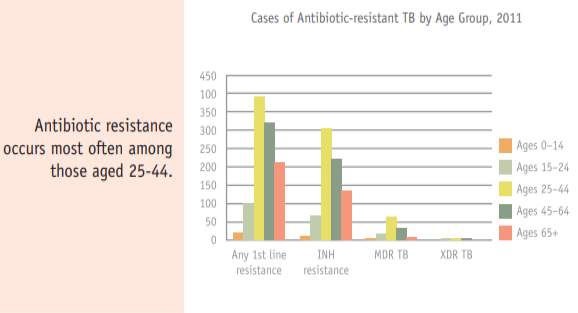 The data from these studies demonstrated the serious issue of the overuse of antibiotic in Australia and the United States of America. The data appeared to be reliable and sufficient as it was taken over a long period of time and included a considerable number of patients. However, the results are limited as further data is required from across a larger sample of countries to provide more reliable and accurate patterns of antibiotic prescribing.

Evaluation
These studies were chosen in an attempt to ensure consistency of results about the connection between the overuse of antibiotics and Bacterial-resistance. The studies contained detailed information about antibiotic resistance and its serious effects, mostly caused from the misuse and the wrong prescriptions of antibiotics worldwide. The studies included some of the most common antibiotic-resistant diseases, such as MRSA, S. pneumoniae and TB, which are a huge cause of mortality worldwide.

The study of CDC in the United States and the study of AURA contained lots of information and trends about antibiotic-resistant infections. These studies demonstrated that the overuse of antibiotics definitely is one the of the major causes for the spread of bacterial-resistant diseases that are often untreatable. These studies were comprehensive and thoroughly explored the different variations of antibiotic resistance and resistant bacterial infections. However, there are issues associated with the evidence presented. The limitation of these studies was that they were especially focused on the over-prescribing and the patients in the United States and Australia, which limited the reliability and the accuracy of the data. The recommendation would be to include a larger sample of countries for more accurate and reliable results.

To truly investigate the accuracy of the claim, further testing would need to be carried out in several areas. This testing would need to include wider population of people with varieties of antibiotic-resistant diseases. For example, Improved diagnostic tests and promoted prescribing methods, such as shorter antibiotic courses and delayed prescriptions, would probably reduce the unnecessary prescribing to a large extent. Additionally, understanding the pharmacodynamics of antibiotic resistance is limited currently. A sharper focus on this area would help to determine optimum dosing schedules and durations of treatment. Moreover, the development of new vaccines and antibiotics that do not drive resistance would be essential. These strategies would minimise or prevent the worldwide problem of bacterial-resistant infections from occurring, to preserve the effectiveness of the available antibiotics.

On a balance of probabilities, the claim that ‘The world will run out of effective antibiotics’ appears to carry more weight. Although the studies and the data were more complete in some regions than the others, the evidence from the studies that have been addressed supported the claim and demonstrated that the overuse of antibiotics is leading to an antibiotic resistance and causing the emerge of superbugs. The studies discussed that the collapse of many effective antibiotics combined with the emergence of antibiotic-resistant bacteria has led to dramatic increases in the incidence and severity of bacterial infections.

Antibiotic resistance is a major threat to human health, and there is concern that in time there will be bacterial infections that cannot be treated. Resistance cannot be confronted without putting an end to the massive quantities of antibiotics that are exposed to the environment. Finally, novel approaches and effective therapies will always be needed to minimise this worldwide serious issue.

Factors Contributing To Antibiotic Resistance Can Be Prevented By Raising Public Awareness & Prevention Methods Abstract This report looks at some of the reasons behind the spread of antibi...

Which Antibiotic is the Most Effective on Bacteria?

INTRODUCTION Antibiotics The word antibiotic comes from the Greek anti meaning ‘against’ and bios meaning ‘life’ (a bacterium is a life form).’ Antibiotics are also known...

Introduction In the 1960’s the Advance Nurse Practitioner role was initiated as an action plan initiative to resolve the epidemic of having enough accessible primary care physicians in underser...