There are three main forms of cell death, these are: apoptosis, autophagy and necrosis.

Apoptosis is the physiological process by which cells are destroyed in a controlled manner (Elmore 2007). There are four basic steps involved; the first is cell shrinkage, blebs begin to form and condensation of chromatin occurs. Next, membrane blebbing occurs and enzymes begin the process of nuclear fragmentation. In the late stages of apoptosis, the cell is broken down into apoptotic bodies which contain the cells components and nuclear fragments. The final stage is the phagocytosis of apoptotic bodies (Ulukaya et al. 2011).

One of the main ways in which phagocytes recognise apoptotic cells is the presentation of phosphatidylserine (PS). Ordinarily, this phospholipid is found on the inner leaflet of the membrane bilayer, during apoptosis it translocates to the outer leaflet and binds to a PS receptor present on the phagocyte (Wu et al. 2006).

In autophagy, targeted components such as organelles are isolated in an autophagosome; a form of vesicle with a lipid bilayer membrane. These autophagosomes are degraded by lysosomes (Kroemer, G et al. 2009).

Necrosis is often thought of as uncontrolled cell death. However, there is an increasing amount of evidence that suggests it is regulated by transduction pathways and other mechanisms (Kroemer, G et al. 2009). It is caused by factors such as trauma, infection and toxins. It is characterised by the swelling of cells which causes the cell membrane to rupture, resulting in the release of intracellular components. These intracellular components can trigger a local inflammatory response. In contrast to apoptosis, the phagocytic stage does not occur in necrosis (Golstein, Pierre and Kroemer, Guido 2007). As a result, dead cells and their intracellular components remain at the site of necrosis, this build-up of debris may lead to conditions such as gangrene. Due to its detrimental effects, it’s preferential that necrosis is not produced by therapeutics.

Cisplatin and 5-fluorouracil are chemotherapy agents, which both cause apoptosis by interfering with DNA via its replication and repair. Cisplatin crosslinks with purine bases in DNA which interferes with DNA repair mechanisms, this means that DNA damage is not fixed triggering apoptosis (Dasari and Bernard Tchounwou 2014). 5-flurouracil is an antimetabolite, it is metabolised into 5-fluorodeoxyuridine monophosphate (5-FdUMP) which is then incorporated into both DNA and RNA and also inhibits thymidilate synthase (Parker and Stivers 2011).

Flow cytometry is a powerful tool that allows for the rapid differentiation and characterisation of particles including cells. A flow cytometer is made up of three main components: fluidics, optics and electronics. When a sample is injected into a flow cytometer, the fluidics system is responsible for producing a stream of single particles, this relies on the principle of laminar flow. This allows the particles to be interrogated by the laser beam individually. When a particle passes through the laser beam it scatters light. The amount of forward scatter is proportional to the size of the cell. The side scatter is proportional to the complexity of the cell. If a fluorophore is present, it can be excited by a specific wavelength of light. It will then undergo a Stokes shift and a different wavelength of light will be emitted which can be measured by the electronics of the flow cytometer (Macey 2007, Maxwell and Hannon-Fletcher 2009). The fluorophore can be conjugated with proteins such as annexin V which have a known high affinity to specific molecules present on the cell surface.

Annexin V is a 35.7kDa, calcium sensitive, phospholipid binding protein. It has a high affinity to phosphatidylserine. The binding of fluorophore labelled annexin V is used as a common measure of apoptotic cells by flow cytometry (van Genderen et al. 2008).

To measure the effectiveness of two anti-cancer drugs by measuring the level of apoptosis in a population of HepG2 cells after being treated with cisplatin (15µg/mL) or 5-fluorouracil (25µg/mL) for 48 hours and compare those to a population of untreated cells via flow cytometry.

Please refer to laboratory schedule (Hatch 2014). Following the collection of data descriptive statistics and a one-way ANOVA test were carried out the results of which can be found in the appendix. 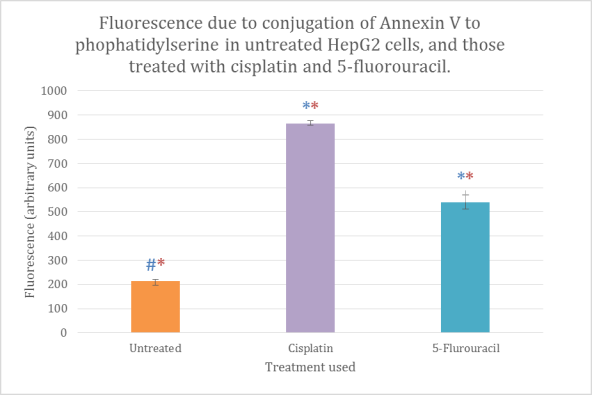 The data used was a class set, some of the data provided was produced by those running the laboratory session as some samples did not contain a pellet which was needed to run the flow cytometry analysis.

As mentioned in results, cisplatin showed a greater mean fluorescence compared to 5-fluorouracil, Results were 726 and 540 respectively. Seeing as fluorescence is directly proportional to phosphotidylserine expression, which in turn is a direct measure of apoptosis. It can be assumed that cisplatin produced the highest level of apoptosis and is most cytotoxic to HepG2 cells. Although a higher concentration of the drugs were used (150µg/mL) this result has also been seen in the literature (Brenes et al. 2007).

It is well documented that molecules found within all cells, including hepatocytes also fluoresce at a green wavelength, the most notable of these are flavins which fluoresce at around 560nm (Croce, Anna Cleta et al. 2007, Croce, Anna C et al. 2014). FAD (flavin adenine dinucleotide) is an example of a flavin and is a redox cofactor used in metabolism. HepG2 cells are a liver carcinoma cell line. Due to their cancerous nature there would be a high level of metabolism within these cells and hence, a high level of FAD.

In this experiment, only one stain was used in this experiment (Annexin V), this allows for the identification of cells that are cytotoxic. To evaluate the true effectiveness of a chemotherapy drug, the cell viability and necrosis is also needed. Necrosis and late stage apoptosis can be measured using propidium iodide (PI). PI binds to nucleic acids and is impermeable to intact membranes, it is often used in combination with annexin V as it fluoresces red and there is little overlap between the wavelengths of red and green light. Therefore, compensation is not needed after flow cytometry has been carried out.

It has been observed in the literature that the cytotoxicity of 5-fluorouracil is dependent on both dose and exposure time (Okamura et al. 2008). We only looked at one dose and exposure time for both drugs. It has also been observed that the use of cisplatin in combination with 5-fluorouracil or other chemotherapy drugs has a synergistic and additive effect in hepatoma cell lines (Kogure et al. 2004), both of these could be investigated further is the experiment were carried out again.

In conclusion, cisplatin was shown to produce a higher level of apoptosis in HepG2 cells than 5-fluorouracil. However, to fully evaluate the effectiveness of an anti-cancer agent, measures of viability and necrosis are also needed.

The differences between the two drugs may be due to the different mechanisms by which the drugs work. The introduction of 5-dUMP into DNA and RNA is a more subtle mechanism compared to the cross-linking of DNA via cis-platin. This cross-linking may be detected by cells more readily resulting in higher levels of apoptosis. As HepG2 cells were used, these results may only be the case for hepatocellular carcinomas.

Kogure, T., Ueno, Y., Iwasaki, T., and Shimosegawa, T. (2004) “The Efficacy of the Combination Therapy of 5-Fluorouracil, Cisplatin and Leucovorin for Hepatocellular Carcinoma and Its Predictable Factors.” Cancer chemotherapy and pharmacology 53 (4), 296–304

Table 3 ANOVA analysis carried out on the data

Table 4 Ad-hoc test Tukey’s range tests and LSD showing statistical significance between groups. All differences between groups are statistically significant (p<0.05) apart from between group 1.00 and 3.00 which are the negative control and untreated sample respectively (p<0.10)