The magnitude of malnutrition among children under five years of age is high in Pakistan. Under nutrition and infections are the two most important factors that affect the growth of children. This study explains the extent of under nutrition and prevalence of wasting and stunting among preschool children.

This cross sectional study covered the age group 6-59 months in Jalozai Camp, District Nowshera. The total sample was 446. Height for age, weight for age and weight for height were measured as per WHO guidelines. Systematic random sampling sample was used for sample selection. For data collection a questionnaire was designed.

Under nutrition in children is a problem of developing countries. Under nutrition is considered as a key factor for illness and death, contributing to more than half the deaths of children globally. It also poses threat to their physical and mental development, which result in lower level of educational attainment. [1]

South Asia has by far the highest levels of underweight, affecting 46 per cent of all under-ï¬ve children with 44 per cent of its children stunted and 15 per cent wasted, considerably in excess of rates in most other regions.[2]

There is a definite possibility that child nutrition would deteriorate in case of displacement of families.[3] Unfortunately due to manmade and natural disaster, many families have been displaced especially in Khyber Pakhtunkhwa from tribal agencies.

Pakistan however made some improvement in wasting rate (15%). Pakistan and Sri Lanka had third highest wasting rates in the region.

The under-five mortality rate for Pakistan is high by international standards: 137 for 1,000 births.

Results from the latest National Nutrition Survey (NNS, 2011) show an alarming nutrition situation in Khyber Pakhtunkhwa. Under-nutrition is one of the main causes of death among infants and young children.[6]

Jalozai Camp, District Nowshera is entertaining thousand of IDP`s from different tribal areas. These children are especially vulnerable to under nutrition in such circumstances.

As no other study was conducted in Pakistan in internally displaced people to assess the nutritional status of children so this study would provide us with baseline assessment of under nutrition in children living in Jalozai IDP camp, District Nowshera.

A cross-sectional study was conducted at Jalozai IDP camp, District Nowshera having 11300 Under 5-year old children. The children in the IDP`s camp were selected through simple random sampling. Information was collected mainly from the head of the family, due to cultural constraints of the area. The sample size, calculated with prevalence rate of 29.7%(4) & margin of error at 0.05, was 446.

Structured questionnaires were used to obtain the information about household characteristics and Anthropometric measurements.

Weight measurements were undertaken to the nearest 100â€…g using a 10â€…kg beam balance and a 50â€…kg standard electronic balance. For children younger than 2â€…years of age, length was measured to the nearest millimetre in the recumbent position using an infant-meter. Children older than 2â€…years were measured in a standing position using a measuring board. Children between ages 6 to 59 months were included while Severely Diseased and mentally ill children were excluded.

Age was recorded as told by parents but confirmed by comparing with different events and local calendars; because birth certificates were not available in most cases. Children were classified by the reported age into the following groups (in months): 6-18, 18-26, 26-36, 36-46 and 46-59.

The outcomes of this study were three anthropometric indices, stunting (height-for-age) HAZ, underweight (weight-for-age) WAZ, and wasting (weight-for-height) WHZ. Stunting is an indicator of chronic under nutrition, whereas wasting often assesses acute nutritional stress within a population. HAZ is described as stunted, a condition that reflects chronic under nutrition. WHZ measures the current nutritional status of a child while WAZ captures aspects covered in both HAZ and WHZ.[7] The z-score are computed by using the World Health Organization recommended reference population (WHO, 2006).

The study was conducted with the approval by the Ethical Review Board of Khyber Medical University; Peshawar. An informed voluntary consent was obtained. Confidentiality of the data was ensured.

Data was analyzed using SPSS 16.0. Univariate and multivariate analysis was done for association between independent and dependent variables. Composite indices like WAz, HAz, and WHz were compared with the WHO reference data. Children with below -2 Z-scores and -3 Z-scores of the reference population were considered as malnourished and severe under nourishedrespectively. Quantitative Variables were described as Mean ± SD. Frequencies and percentages were calculated for qualitative variables.

DISTRIBUTION OF AGE AND SEX OF SAMPLE:

All the three indices shows an interesting association with age, highest at the younger age group, then declining sharply, and subsequently increasingly gradually with increasing age. Figure 1. 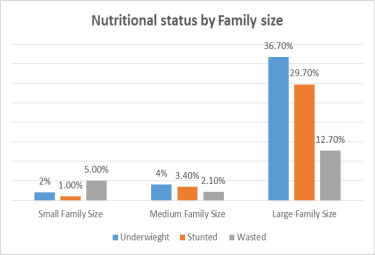 Father and mothers having no formal education show high frequency of under nutrition.

In our study, 60% families had income less than Rs.10000 per month. In earlier studies, families with low socio-economic status, where monthly income was Rs.5000 or less, had 52.2% malnourished children, while the families with an income of Rs.10000 and more, had 24.7% malnourished children. Economic development also brings down under nutrition and vice versa. In our study families having income >5000 showing high prevalence of under nutrition as shown in Figure-4

In our study we found that 55.2% children haven’t received any vaccination except polio drops and only 14.6% children were fully vaccinated. Figure-6 showing that in not vaccinated children there are 24.4% underweight 20% stunted and 9% are wasted.

by WFP and PDMA. There was availability of fortified foods and supplementary feeding centers by these organizations.

A similar study was conducted in Gulu District, Uganda, in which underweight children were 20%, stunted 27% and wasted 32 %. [8]

The result showed that younger children are at higher risk of under nutrition than the older children. This finding is similar to the study conducted in displaced population of Ethopia in Sudan. [9]

The study found that lack of formal education[10], large family size, late and early weaning, lack of exclusive breast feeding[11] and poverty, very low coverage of immunization programs were associated with under nutrition in children.

Combination of these factors and under nutrition, in turn, predisposes the children to various infections, hence can cause the high frequency of morbidity and mortality.[12]

Under nutrition prevention efforts should target the younger age group.

Supplementary feeding centers and fortified food must be available on large scale for the community.

Establish a nutrition surveillance system to monitor any progression of the nutritional situation.

Malnutrition, as well as other factors, has negative effect on the person’s quality of life. In the UK, hospitals admission rate and mortality were greatest in patients with BMI below 20 (kg/m2). Malnutrition can also cause reduced psychological wellbeing (increase anxiety, depression apathy, and loss of concentration and self-neglect)

Health and Nutrition of Developing Nations

Timothy Lee   It may seem as an overwhelming task when attempting to understand the factors that are related to the health and nutrition of many, if not all, of the developing nations around the w...

Malnutrition Effects on Quality Of Life

The focus of this assessment is quality of life and specifically this paper considers how malnutrition affects quality of life of community settings’ patients. According to the Scottish Governme...

Malnutrition has significantly increased in the ageing population resulting in a major health problem in the United Kingdom and is a cause and consequence of ill health. This essay will seek to criti...