In healthcare, interoperability is the ability of different information technology systems and software applications to communicate, exchange data, and use the information that has been exchanged (“What is Interoperability?”, 2017). This necessary communication between systems can be achieved if consistent standards are used, and both syntactic and semantic meaning of information are defined in clear terms. When standards are consistent and implementable, they not only reduce the risks and timelines of health technologies, but also drive down costs significantly. According to Bender and Satripi (2013), the economic cost benefit of interoperability of healthcare information systems in the USA alone has been estimated at $77.8B (Bender & Satripi, 2013).

One relatively new standard that has been established seeks to solve these risks and realize these cost saving potentials. FHIR (Fast Healthcare Interoperability Resources) is a next generation framework created by the Health Level Seven International (HL7) organization. It combines the best features of HL7’s v2 and v3 product lines while leveraging the latest web standards (“Introducing HL7 FHIR”, 2017).

Although it closely resembles its predecessors, FHIR comes as a huge departure from previous messaging standards such as HL7 v2 and v3. FHIR was developed through an incremental and iterative approach, which allows it to reflect the contemporary standards of medical practice. The development process ensured that FHIR could adequately handle complex systems, with excellent usability that made it fit for use in the current healthcare contexts. Additionally, the system extensively uses open internet sources, making it both cheap and highly adaptable. HL7 v2 on the other hand, was not scalable and did not support jurisdictional information systems (Bender & Satripi, 2013). Furthermore, it did not provide any support for any global enterprise identifiers, which made interoperability extremely difficult. The next iteration, HL7 v3 introduced the HL7 Development Framework, and used the Reference Information Model. Although it was considered an improvement over its older counterpart, the standard was not directly implementable and required substantial effort to generate executable software systems (Bender & Satripi, 2013).

FHIR supports both XML and JSON for data representation and sharing. According to the World Wide Web Consortium (W3C), XML is a set of rules, guidelines, and conventions for designing text formats for data, in a way that produces files that are easy to generate and read, that are unambiguous, and that avoid common pitfalls, such as lack of extensibility, and platform-dependency (“XML in 10 points”, 2017). In essence, XML is used when data is required to be share from one system to another. An example of XML code used for identification and definition of a medication is illustrated in Appendix A. Furthermore, for simplification, Appendix B illustrates how text input “Hello HINF 6355!” would appear in XML. FHIR in general is suitable for many times of data and contexts including mobile phone apps, cloud communications, EHR-based data sharing, and more (“Introducing HL7 FHIR”, 2017).

While FHIR shows great promise to become a widely implemented standard, there are some criticisms of FHIR. Since FHIR creates a resource oriented environment, the implementation of its basic systems is relatively simple. However, constructing collections and interoperability relationships using base resources comes with very little guidance. The standards also use the base CRUD operations, but beyond that, there is little support for dynamic behavior (Bender & Satripi, 2013). This may become a huge problem area to ensure interoperability, which is its primary task. Limitations aside, FHIR is gaining momentum and can become a widely implemented standard in coming years. 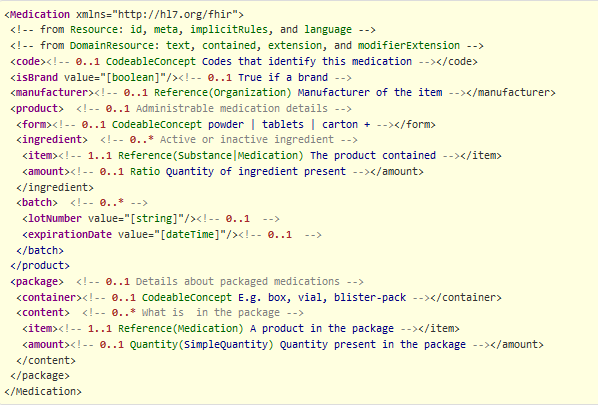