Arthritis is one of the pain problems that cause the disability of elders. To overcome this issue, total hip replacement surgery is introduced to improve the quality of life for patients who have this problem. In this report, with aid of software, SOLIDWORKS 2018, the hip prosthesis is tested with 500 N, normal to the femoral head with fixed femoral stem.

Furthermore, the diameter of femoral neck is adjusted to be four different diameters. Consequently, stress, strain, and displacement can be obtained using static simulation in SOLIDWORKS. According to the results, the change of diameter of femoral neck affects the value of stress, and strain, which these two values rise up as the diameter is reduced. However, fatigue is also needed to be taken into account for the hip prosthesis, because the weight of patient can also fluctuate. To withstand in the long term, fatigue is one of the factors that needed to be taken into consideration.

Arthritis is one of the main problems that cause the disability to elders. Furthermore, in the case of older people, they face with osteoarthritis, while other cases may face with rheumatic arthritis, post-traumatic arthritis, and avascular necrosis which cause hip pain [1]. To overcome this disability, the total hip replacement surgery is introduced to improve the quality of life for these patients, as they can live near normal condition as possible [2]. The term total hip replacement is defined as the removal of hip joint part and replaces with artificial ball and socket joint, which also called as hip prosthesis [3],[4].

A. Type of Total Hip Replacement

From the Journal of Mechanical Engineering, Vol SI 5(5), 205-215, 2018, the total hip replacement can be categorized into three types, cemented, uncemented, and hybrid [2]. Cemented implant use fast-drying bone cement between femoral stem and bone, while cementless implant use porous coating on the stem [2]. Drawback of the cemented implant is it will have loosening effect for long term, unlike direct penetration, which introduces osseointegration that finally bone and hip prosthesis will combine as one piece [2]. If the patients are old, they need have the cemented implant as the bone is less active to grow around the stem [2].

B. Biomaterials in Hip Joint Prosthesis

From International Journal of Materials Science and Engineering, Volume 4, Number 2, June 2016, It stated that during daily activities, mean load on hip joint is about three times the body weight, while the peak load during jumping may be up to 10 times the body weight [4]. Therefore, the biomaterials that are fabricated to be the hip prothesis needs to be able to withstand high load, but also need have high wear resistance, which is one of the critical issues of implant failure [4].

Three main materials, metal, polymer, and ceramic are used to craft the hip joint, which mostly are in form of Titanium based alloy, Highly cross-linked UHMWPE, and Alumina respectively [4]. Firstly, Titanium based alloy has high specific strength, high corrosive resistant, complete inertness with biocompatibility, while offers low density [4]. Secondly, Highly cross-linked UHMWPE has high wear resistance . which permitted the use of larger femoral head, allowing greater range of motion [5]. Lastly, Alumina, which has low friction, chemically inert, resistant to corrosion, and stable in long term use, but it is poor fracture [4].

Hibbeler, 9th edition, normal stress is the ratio between load and perpendicular area to that load, which can written as following

From the same source, normal strain is defined as the ratio of change in length to the original length [6].

From 18th International Conference on Applied Mechanics and Mechanical Engineering, 2018, it can be assumed that during slow walking, the weight of the body is supported by one leg [7]. From the data published by Miller and Nelson, Biomechanics of sport, 1990, the weight of one leg can be assumed as 0.16 of body weight (Wb) [8]. The forces equilibrium equations in X-Y axis, and moment equation about z axis, where the reaction force pass through this point are as below [7].

From the same paper of force analysis, the authors tested cyclic loading, which is one of the factor that cause fatigue [7]. In this section, Titanium alloys, Ti-6Al-4V, and Cobaltchromium alloy are used to be the material of hip prosthesis [7]. Table 1 and 2, showing the maximum pricipal stress at the fixation level from FE simulations and experimental testing, and mechanical properites of the prosthesis hip joint.

There are 3 main steps in this lab, the first step is assembly the hip joint which has three main parts, and the second step is static simulation, which the values of stress, strain, and displacement can be obtained. The last step is to change the diameter of the femoral neck, and repeat the simulation.

A. Assembly the artificial hip joint

After downloaded the files, to assemble them, "Mate" function is used, by assembly from the top of the hip prosthesis, i.e. the acetabular cup with articular interface, then assemble with femoral head, femoral neck, and femoral stem respectively. The "Mate" function is circled as the Fig. 3. B. Setting the materials

The materials need to be customized according to the lab manual, which stated that the for femoral stem, and femoral neck, material is Titanium TMZF, and for others is Bio-ceramic Al2O3. The values for properties for both materials are provided in the lab manual.

C. Simulation of the hip prosthesis

To find stress, strain, and displacement of the hip prosthesis, there are several steps, which provided in detail with figures below.

3. Fix the femoral neck with fixture function, type 500 N in the external force, and select the femoral head to be the testing area, with normal direction. D. Change the diameter of the femoral neck

The diameter of femoral neck is needed to be change into three different diameter, which in this lab, diameter of 3mm, 3.5 mm, and 4 mm are chosen. After change the diameter, repeat step A and step B for each diameters.

After run the simulation for four times with different diameters of the femoral neck the values of stress, strain, and displacement are shown below.

Table 3. Maximum stress for each diameters of femoral neck Fig. 7. Stress value of the femoral head at diameter of 3 mm

Table 4. Maximum strain for each diameters of femoral neck Fig. 8. Strain value of the femoral head at diameter of 3 mm

Table 5. Maximum displacement for each diameters of femoral neck Fig. 9. Displacement value of the femoral head at diameter of 3 mm

Fig. 7, Fig. 8, and Fig. 9, are the representatives for other diameters result. By the way, the pictures of stress among four different diameters look exactly the same, which are also in the same manner for strain and displacement. For stress and strain, the peak values are on the lower curve, which is the peak bending of the femoral neck.

From the result in part A and B, which shows both table and figures, the data analysis will be conducted into two parts. The first part, analysis of the data from Table 3, and 4 and Fig. 7, and Fig. 8, The last part is fatigue analysis. In addition, stress and strain that are discussed in this section mean normal stress and normal strain as mentioned in Part D, literature review.

A. Analysis from Data in Tables and Figures

From Tables 3 and 4, they can be observed that trend on the stress, and strain, rises up when the diameter is thinner, which goes along with equations 1 and 2 in part D, literature review. As the diameter reduces, the cross-sectional area is also decreasing. As stress is the ratio between the force to perpendicular cross-sectional area, which in this case, force is fixed to be 500 N, so it can be derived that stress is directly inverse variation to the cross-sectional area. For strain, the reduction of diameter can also be taken into consideration as the reduction of circumference. Therefore, from equation 2, the numerator of the equation, or the difference of length after the external force is applied and the original length is higher. Consequently, the strain also rises up.

As the Fig. 7 and Fig. 8 are the representatives for other diameters, the maximum stress which is in red, with similar manner to maximum strain. All results from SOLIDWORKS static simulation provide the exactly same pictures as shown in Fig. 7, and Fig. 8. For the reason that they have the same pictures, the results demonstrate that the maximum stress, and strain are at the curve on the femoral stem that connected from the curve of lesser trochanter, which from the force analysis in Fig. 1, reaction force (R) is the same force which is applied on the femoral head which cover the femoral stem. Not only this reaction force that needed to be taken into consideration, but the muscular force (M), by inspection, also contributes on the bending at the stem too. Therefore, if the patients have more weight, the hip prosthesis is required to have better requirement for withstand more load, also the fatigue which is analyzed in Part B.

According to the lab manual, the materials are Titanium TMZF, and Bio-ceramic Al2O3, which can be compared with Part F in literature review. As 18th International Conference on Applied Mechanics and Mechanical Engineering, 2018, the author used the material of hip prosthesis to be the uniform Ti6Al-4V, which is also Titanium alloy. However, in this lab, the materials are separated into two parts, so the values of maximum stress in this hip prosthesis is different from table 1. Since Bio-ceramic Al2O3 is poor fracture, so it leads to less stress, and strain property.

From the results, the highest stress, strain, and displacement are on the same spot, which can be explained by the force analysis, in Fig. 1, that reaction force (R), and muscular force (M), act on the femoral head, and the curve of greater trochanter respectively. Therefore, these two forces provide the bending moment at the curve on the femoral stem, that connects from the curve of lesser trochanter.

The term “Prosthesis” can be defined as an artificial replica that replaces human damaged or lost body part. Prostheses are usually made for human main joints such as hip, knee, elbow, shoulder, wrist etc, they are also used in dentistry. 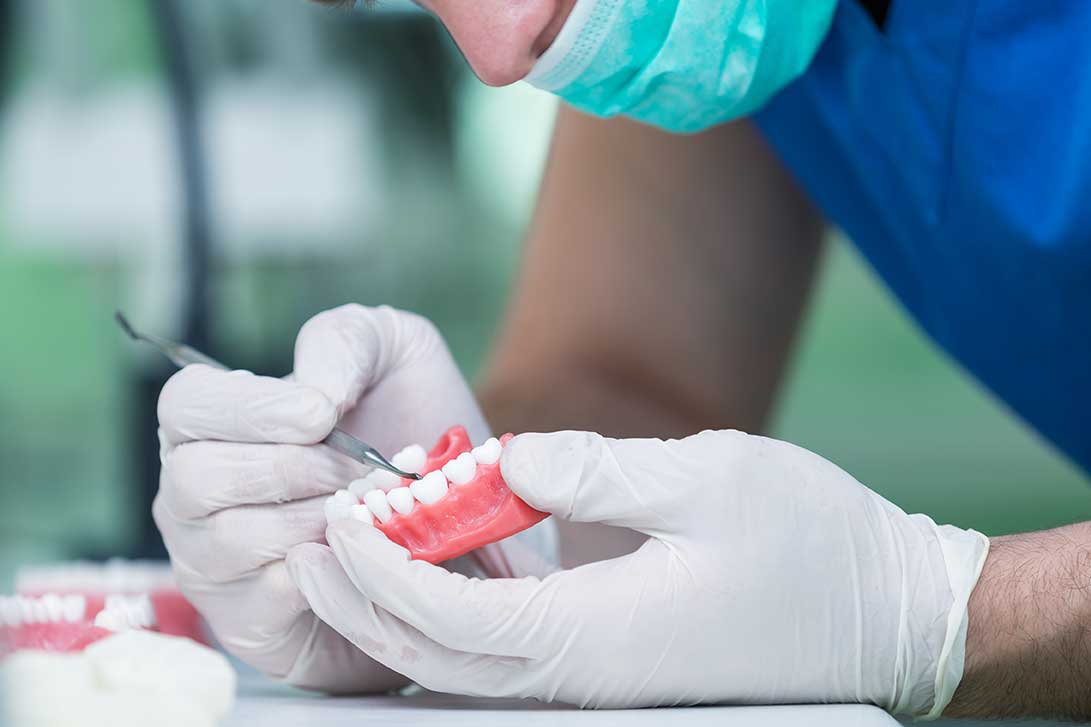 People who undergo amputation experience many emotions. In Graces case, she may experience anxiety with emotional outburst not only due to the pain and physical loss of a limb, but also what effects t...

Differences and Importance of IPPS, OPPS, MPFS and DMEPOS

The inpatient prospective payment system (IPPS) is a structure of payment that comprises the instances of diagnosis-related groups (DRGs) as acute care hospital inpatients. It is founded on resources...