Introduction: Facial trauma is without a doubt a most challenging area for any emergency physician. Despite many researches and advances in the understanding of multiple techniques; initial assessment and management of facial injuries in emergency and early stages remained a complex area for patient care.

Objective: The purpose of this study is to determine the prevalence of facial trauma among patients with head injuries that may help emergency department physicians to deliver accurate and quick diagnosis and decision. Trauma to this region is often associated with mortality and morbidity and varying degree of physical and functional damage.

Place and Duration of Study: Department of Emergency Medicine, Ziauddin University Hospital, Karachi from four months from Feb 2014 to May 2014.

Methodology: This study was conducted at Ziauddin university hospital emergence medicine department. It is a prospective cross sectional descriptive hospital based study. 115 patients who were diagnosed of having head injuries were included in this study. Information on age, sex and cause of injury was taken for each case. Each patient was then examined for the presence of facial trauma using the CT 3D face. Data was analyzed using the SPSS program.

Conclusion: Based on the study conducted; it is safe to conclude that patients who have facial trauma associate with head injuries are young males and is mainly caused by road traffic accident. The result might vary by governmental, culture or social differences.

Trauma is a type of injury where external force is being applied suddenly and violently at the body which causes a serious injury [1]. A head injury in human body is any trauma that can cause injury of scalps, brain or skull. The injury could be a minor bruise or serious injury on the head and brain injury [2]. Some injuries can result in prolonged or unrecoverable brain damage. The injury can cause bleeding inside the brain or forces that damages the brain directly. The most common cause of head injuries are road traffic accidents, fall, physical assault or others. These accidents can occur at home, work, outdoors, sports or many other places.

The face is vital to human appearance and function. Facial injuries can impair a patient’s ability to eat, speak, interact with others, and perform other important functions. Facial injuries may be caused by a direct blow, penetrating injury, or fall. Pain may be sudden and severe. Bruising and swelling may develop soon after the injury [11].

This study was carried out at the department of emergency medicine, Ziauddin University Hospital, Karachi, Pakistan. Patients of either gender with more than 15 years of age presenting to Ziauddin Hospital Karachi who were diagnosed of having head injuries were selected.

Patients who gave the history of previous head trauma were not included in this study, this aimed at avoiding some ambiguity during examination as to whether the encountered trauma was the result of the recent head injury or previous underlying trauma.

Each patient was then examined for the presence of facial trauma, using 3D CT scan. A 3D CT scan, or a three-dimensional computerized tomography scan, is a type of x-ray that allows high quality images of organs, blood vessels, and bones to be recorded in a very short amount of time. The individual CT images are then layered together to form a virtual model of the body. It is able to reveal the functionality of many of the anatomical structures in the body, in addition to structural defects, tumors, and lesions [12].

The obtained data was checked for completeness and clarity then entered into the computer and analysis was performed using Statistical package for social sciences program (SPSS). Chi –square test (X2) will be carried out and significant level p<0.05 will be used to draw out conclusion by the help of the statistician.

A Total of 115 patients with head trauma were included in the study. The gender distribution of the study population is as shown in Table 1 below.

The age distribution of the study population is as shown in Table 2 below.

Table 3:- Presence of facial trauma according to gender

The presence of facial trauma according to age is shows in table 4 along with graphical representation. Out of 115 patients monitored, 59 patients were between ages 15 – 30. From these 59 patients 51 have facial trauma where head injuries were evident, this make 86% of the population.

The patients between 31 – 50 years of ages were 26, where only 14 were found to have facial trauma which makes 54% of the population.

The patients over 51 years of age were 30 where 22 were found to have facial trauma which makes 73% of the population.

Table 4:- Presence of facial trauma according to age 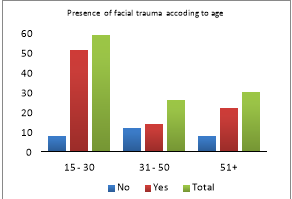 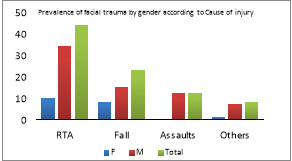 Table 6 below shows the details of prevalence of facial trauma by age according to cause of injury. The detail shows higher number of road traffic accident, followed by fall, assault and other causes of injuries. 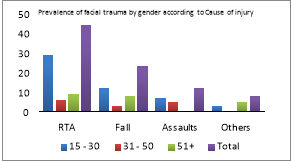 Head injuries causes hospitalization of 200 – 300 patients per 100,000 population per year worldwide. A head injury associated with facial trauma comprises a number of complications, such as sequestrum formation, sinusitis, nasolacrimal duct injuries, facial deformity and injury to or entrapment of the globe. Trauma is very well known to be the main cause of death in first forty years of life. Facial trauma can be very dangerous as this could impact the essential parts of the body like speech, respiration, vision or smell so special attentions and importance should be given to facial trauma patients [13].

Multiple studies conducted that amongst facial trauma the most common sites are nose (50%) [6] and maxillofacial trauma (5%) [5]. In this study 115 patients with head trauma were included with sex ration of 2.8M / 1F which seems to be consistent with previous studies done in different part of the globe [8, 10, 7]. The findings in this study also revealed the most common involving age group was 15 – 30 years of age; which constituted 51% as compared to other age groups. This finding is the same as that done in Nigeria and others in 2010 [42]. The reason for high prevalence of head and facial trauma to this age group (15 – 30 years) as compared to other age group could be related to activities of this age group in economic and social activities which lead to increase in accidents and violence.

In this study it was also found that male are slightly more involved as compared to females where by 74% were male patients and 26% were female patients. The most common cause of facial trauma is to be road traffic accidents which involve motor cycle; car and pedestrian while the second most is fall from height. This was similar to previous findings in other studies which shows most common etiologies of injuries were car crash (39%); followed by assaults (28%) with majority are male with age group 15 – 30 years [9]. Observations from multiple studies of different part of the world shows that leading cause of facial trauma associated with head injuries is road traffic accident followed by fall and assault. Based on the study design and area; each study has its precise section of dominance.

This study concludes the prevalence of facial trauma associated with head injuries was 76% and higher age group is 15 – 30 years with 51% than other age group and prevalence of male 59% than female 16% had facial trauma where head injuries were eminent. The common cause is road traffic accident 50% followed by fall 26%, assault 13.7% and others were 9%.

CONSENT FOR THE STUDY

All patients or relatives were given a necessary explanation about the study before they asked to participate.

For those patients who were unconscious, consents were obtained from their relatives.

For patients under ages 18 years, informed consents were obtained from their parents/ guardians.

We would like to acknowledge faculty of Ziauddin Hospital, North Campus for helping us during the study, staff for helping in data collection and all others who have given their input. The study was self funded.

Major trauma is the term used to describe a serious injury that could cause permanent disability or death. A trauma nurse’s environment consists of action and emergency situations on a day to day basis. It requires a discipline that covers various roles when caring for trauma patients with severe situations.

Pathophysiology of Injuries in Trauma Care

Introduction to major incident: The world is moving at a fast pace and the introduction of various methods and techniques to enhance an individual’s wellbeing has always been an important aspect of ...

Diagnosis and Chiropractic Management of Post-Traumatic Piriformis Syndrome: A Case Study Chief complaint A 37-year-old male patient presented himself at a local chiropractic clinic with a chief comp...

Chris Williams is 20 years old and works in an office in the city. He is a keen runner and is training for the London Marathon. He goes out every morning before work for a 4-6 mile run. He has no hist...