The purpose of this research paper was to investigate the population of emerging adults’ (18-30) risk for sexual assault and emerging adults’ involvement in risky alcohol consumption. This research highlights the importance of preventing emerging adults in contributing to alcohol abuses that can expose them to vulnerable situations and often affect them long-term also. The goal of this essay is to give an informational intervention to prevent emerging adults’ usage of alcohol. At-risk individuals should be directed to one of the many organizations that support the individuals emotionally and physically.

In a rapid treacherous world, the emerging adults are entering into a very dangerous environment. During this developmental stage, emerging adults are not seen as children, but now as adults. Now they have more freedom, responsibilities, make their own decisions, and become financially independent. This is a period for exploration of identity, career plans, jobs, and relationships before individuals make long-term adult commitments. They have the chance to explore the world around them in a way that they might have not been able to before. However, having all this free time is difficult to manage and can lead to stress. Arnett (2006) questions Robbins and Wilner (2001) when they discuss this stress: “However, there is considerable hyperbole in their claim that the emerging adult years are a time of agony. They describe emerging adults as suffering from ‘overwhelming senses of helplessness and cluelessness, of indecision and apprehension’ ” (Arnett, 2006, p. 24). In other words, entering environments that emerging adults are not usually exposed to can lead them in feeling confused and stressed, and they may find destructive ways to eliminate this built-up stress. Moreover, this is the period that risk-taking behavior peaks, with such behaviors as substance abuse usage, unprotected sex, or reckless driving that can affect emerging adults in the long term.

The detriments that risk-taking behaviors have on the lives of emerging adults can lead to a higher risk for sexual assault. A report by Rape, Abuse & Incest National Network (RAINN), shows that people between the ages of 65 and older are 92 percent less likely than 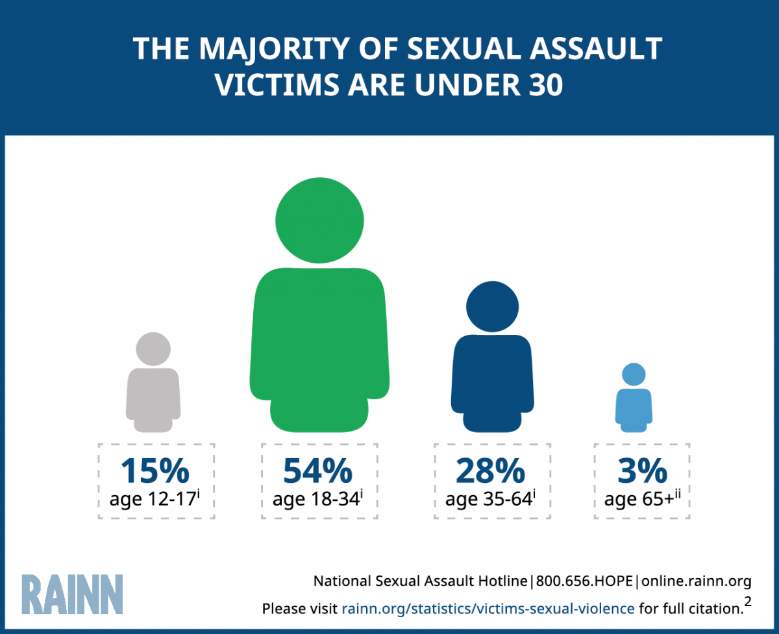 35-64-year-olds to be a victim of sexual violence and 18-34-year-olds are at the highest risk of sexual violence (n.d). People who face sexual harassment or assault is commonly being female. Sexual assault is when a person touches another person’s body without permission. This event often happens and is often not taken seriously as a crime. People who are faced with an unsafe situation are due to bad or illegal behavior like underage drinking, using drugs, and lying to guardians or parents about where they are or who they are with. Some people argue the victim is to blame because they “[participate] in the culture of college drinking made them more vulnerable” and it is their fault in being helpless (Perez-Pena & Taylor, 2014). However, is crucial to remember that the victim should be never to blame for the actions of a perpetrator. Victims should not be asked what they were wearing or what they had to drink. Another reason for sexual assault can lead to negative health behavior, chronic and physical consequences. Sexual assault can lead to sexually transmitted infections and is reported that “gonorrhea and syphilis in adult victims range from 6% to 12% and from 0% to 3%, respectively” (Schwarcz & Whittington, 1990). Not only that, but it can lead to mental consequences of depression, flashbacks, self-harm, suicide, and sleep disorders. The consequences of sexual assault are complex and difficult to document, but “can last a lifetime and span generations, with serious adverse effects on health, education, employment, crime, and the economic well-being of individuals, families, communities, and societies” (WHO, 2010). For instance, a person who experiences sexual assault may have an impact on how they focus and can diminish performances, distance with family and friends and can in the long-term effect on economic well-being, social interactions, personal relationships or unable to return to work or school.

The major behavior, it should be addressed is alcohol. Between the ages of exploring the world emerging adults generally, use alcohol and declines with age. Alcohol generates unsafe events that can lead to harm to the user. It does not mean that alcohol cause sexual assault, but it makes it more likely to be used as a weapon by perpetrators. According to the National Institute on Alcohol Abuse and Alcoholism, “At least 50 percent of college students’ assaults are associated with alcohol used. 81 percent of alcohol-related sexual assaults, both the victim and the perpetrator consumed alcohol. 74 percent of perpetrators had drunk alcohol. 55 percent of victims had been drinking alcohol” (2001). In sum, 80 percent of sexual assaults involved alcohol. The use of alcohol is a concern in preventing sexual assault. Alcoholics can do anything without thinking for the future if they get the money to buy alcohol in which they can go into debt, prostitution, homelessness, and robbery. Emerging adults often abuse alcohol, but do not understand the effects, it may have on their life. In the long-term, it can cause many health risks. According to Center for Disease Control and Prevention (CDC), “Over time, excessive alcohol use can lead to the development of chronic diseases and other serious problems, including high blood pressure, heart disease, stroke, liver disease, and digestive problems. Cancer of the breast, mouth, throat, esophagus, liver, and colon. Learning and memory problems, including dementia and poor school performance. Mental health problems, including depression and anxiety. Social problems, including lost productivity, family problems, and unemployment. Alcohol dependence, or alcoholism.” (2018). Alcohol use can also affect organ malfunctions if the person does not stop to drink high amounts of alcohol or are higher risk of alcohol poisoning, that could result in death. Alcohol can ruin a person’s family, relations, health, education, or job. The behavior of using alcohol has many consequences for not only for the user but also the public.

People who face sexual harassment or sexual assault are commonly female, but it can also happen to men too. Sexual assault is when a person touches another person’s body without permission.

Sexual assault is an on-going epidemic issue with no end in sight.  Healthcare providers are in constant search for opportunities to improve prevention through education and response to sexual assault. ...

Introduction Law enforcement officers are usually the first to come in contact with a particular crisis in a given setting. As a result, most law enforcement units have established a Crisis Interventi...

Forensic Nursing – Role of a SANE  Forensic Nursing is a specialty that combines nursing practice with the legal system.  They often perform as a liaison between medicine an...