(With reference to the effects of sunlight upon DNA and the immune system discuss the involvement of sunlight in disease.)

Most of the positive effects of sunlight are due to the UVB induced production of vitamin D in the skin which acts in aiding the immune system in several different ways that I will discuss later on in this assignment. Some other positive effects include increased UVR resistance of skin after prolonged sunlight exposure, and the uses of phototherapy to treat several skin diseases. There are some negative effects of sunlight that I will go into more detail on, such as sunburn increasing the risk of malignant melanoma by twofold, and the rare disease vitamin D toxification, which can be extremely harmful to health.

In this modern era, it may seem as though vitamin D is easily accessible to people through sunlight, or through our dietary intake, however, vitamin D deficiency is very common. Vitamin D deficiency is defined as circulating 25D levels of less than 20ng/ml (Bischoff-Ferrari et al. 2006) and a vitamin D sufficient individual is defined as having circulating 25D levels greater than 30ng/ml. There are especially high levels of vitamin D deficiency in European and North American populations, (Holick, M. F. 2006) shown by a survey of healthy females across Northern Europe, showing that there was widespread vitamin D insufficiency, (Andersen, R. 2005) and another study which found that 42% of African-American women in the US had circulating 25D concentrations of less than 15ng/ml. (White, J. 2019) This trend could be explained by the fact that vitamin D synthesis is strongly influenced by skin colour. Atmospheric ozone absorbs solar UVB irradiation, meaning that the surface intensity of UVB varies with latitude and the time of year. In temperate regions, vitamin D3 synthesis doesn’t take place during the winter months as surface solar UVB irradiation levels aren’t high enough to induce vitamin D3 synthesis. (Holick, M. F. 2006). These factors, as well as inadequate vitamin D intake in most people’s diets, means that vitamin D insufficiency increases with increasing latitude. (Holick, M. F. 2007). 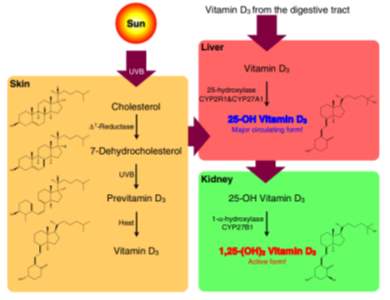 Humans obtain most of their vitamin D through the action of sunlight on their skin, with the photolytic conversion of 7-dehydrocholesterol to vitamin D in the skin. This vitamin D then undergoes other metabolic conversions, such as the enzyme cytochrome P450,CYP2R1 catalysing 25-hydroxylation to form 25OHD in the liver, which is the main circulating form of vitamin D. (1)[11]. Then, in the proximal convoluted tubules of the kidney, 25OHD-1ahydroxylase converts the 25OHD to 1,25-dihydroxyvitamin D (1,25(OH)2D). this compound acts as a hormone to regulate mineral homeostasis and bone metabolism. (1)[12].

Connections between infectious disease and vitamin D deficiency were recognised in the 19th century when it was discovered that patients suffering from tuberculosis (TB) were greatly benefitted by solar radiation.(5)[22]. Around 20 years ago, associations between vitamin D deficiency and TB susceptibility were discovered, and how 1,25D suppresses the proliferation of Mycobacterium tuberculosis in human macrophages. (5). It has been shown in a recent study of a genetically homogeneous immigration population of Gujarati Asians in London with high TB rates that there was an association between 25D deficiency and active disease.(5)[101].

Studies have shown that increasing the serum levels of 25OHD, lead to enhanced bacterial killing, leading to a proposition that variations in vitamin D status could enhance or impair monocyte innate immune responses to infections.(1)[45]. The potential positive effects of vitamin D against TB infection are not the only benefit of the ‘sunshine vitamin’, as vitamin D may also be helpful in fighting other bacterial or viral infectious agents. For example, one small study found that elderly women undergoing long-term osteoporosis treatment with vitamin D had a significantly lower rate of Helicobacter pylori infections than women in an untreated control group. (5)[44]. Scientists such as Cannell have argued that cutaneous vitamin D production provides the “seasonal stimulus” associated with solar radiation that causes the seasonality of influenza epidemics.(5)

The VDR is a nuclear receptor and ligand-activated transcription factor made of a highly conserved DNA binding domain and an α-helical ligand binding domain (5)[72]. It has been recognised that dendritic cells express vitamin D receptors (VDR), showing that they are a likely target for vitamin-D regulated immunoregulation. (1)[64]. The VDR is present in most immune cells, such as T lymphocytes, neutrophils as well as dendritic cells.(5)[3]. A mechanism is present whereby VDR-rich immature dendritic cells respond to 1,25(OH)2D produced by VDR-depleted mature dendritic cells. It inhibits some dendritic cells from maturing, allowing activation of normal immune responses, while preventing exaggeration of this response and the possible negative effects. Therefore it is seen that vitamin D acts as a modulator of dendritic cell function, and therefore the function of the immune system.(1). 1,25D acts directly on T lymphocytes to inhibit T-cell proliferation (5)[92] , and represses the transcription of genes coding for important T helper 1 (Th1) cytokines, eg: gamma interferon and interleukin-2. 1,25D therefore acts as a suppressor of antigen presentation and Th1 activation, which supresses Th1-driven autoimmune responses by polarizing T-helper responses towards a more regulatory Th2 phenotype. (5). Impaired vitamin D signalling (caused by VDR polymorphisms) and/or environmental factors (insufficient sunlight exposure) may contribute to the onset and progression of autoimmunity. (3).

The earliest record of a link between sun exposure and skin disease is from the ancient Egyptians 5000 years ago. Modern medical light therapy for skin diseases started in 1877 when it was reported that exposure to light inhibited fungal growth in test tubes (Downs and Blunt).(6). In 1903, Niels Finsen received the Nobel Prize for Medicine after demonstrating that he could cure Lupus Vularis with light exposure from an electric arc lamp. Cod liver oil (a rich source of dietary vitamin D) was also used as a treatment for TB.(1)[72].

From the late 1800s, phototherapy became key to TB treatment regimes, as prolonged exposure to sunlight can kill the bacteria that cause the TB. Infected children were often encouraged to spend more time outdoors, as they had often come from dark and polluted city slums, so exposing their skin to sunlight raised their vitamin D levels, helping their immune system to fight the bacteria. Due to the nature of sunlight (namely it not being available at all times), artificial alternatives were developed such as the Finsen lamp, which used UV rays to target the worst affected areas of a patient in all seasons. (7).

Vitamin D deficiency has been linked to an increased risk or severity of autoimmune diseases such as type 1 diabetes. (1) [134]. And supplementation with vitamin D has been shown to protects against this. (1)[136]. Under dietary vitamin D restriction, the NOD mouse (a type 1 diabetes model) has shown increased disease severity (1) [137]. Certain VDR gene haplotypes appear to protect against diabetes, and polymorphisms in the CYP27B1 gene have been seen to affect a person’s diabetes susceptibility (1) [139].

Cyclobutene pyrimidine dimers (CPDs), are DNA photoproducts created after a UV photon is absorbed by thymine or cytosine. These CPDs can cause sunlight induced melanoma mutations . In melanocytes, CPDs can be generated for more than 3 hours after UVA exposure from sunlight or tanning beds. UVB is also known to induce DNA damage through creation of CPDs. (4)[20] Oxidative damage by creation of free radicals, such as singlet oxygen and hydrogen peroxide, occurs at all ultra violet radiation frequencies. Cytosine containing CPDs initiate UV-signature C to T mutations in DNA. ‘Dark CPDs’ occur when UV-induced nitrogen and oxygen species combine to excite an electron in melanin (a skin pigment) fragments. This means that melanin may be both carcinogenic and protective against cancer. (2)

The causes of melanoma are unknown, but there are believed to be links with genetic factors. The main non-genetic cause is exposure ultra violet radiation. Sunburns are associated with increasing the risk of melanoma by twofold, whereas non-burning UV exposure is associated with a reduced risk of melanoma. (4)[12]. Studies have found that outdoor workers have a lower incidence of melanoma than indoor workers. (4)[13]. With respect to sunburns, melanocytes are not replicating cells, so once DNA damage has occurred cellular replication need to occur because of the possibility of unrepaired or mis-repaired melanocytes to develop into malignant melanoma.(4)[20]. It is thought that chronic non-burning sun exposure protects against sunburn and melanoma development due to increased melanisation and epidermal thickening, or from higher vitamin D levels. (4)[25].

Although not directly caused by sunlight, vitamin D toxicity (VDT) and its clinical manifestation, severe hypercalcemia, are caused by excessive long-term intake of vitamin D, existence of a disease that produces the active vitamin D metabolite, or a defect of the vitamin D metabolic pathway. The most common symptoms include confusion, recurrent vomiting, abdominal pain, and dehydration. VDT is rare but can have serious health effects is it is not identified quickly. (9)

My research has shown the effects of vitamin D (obtained through the action of sunlight on the skin) on both innate and adaptive immune responses, and supports the hypothesis that vitamin D may be able to prevent proliferation of pathogens like M.tuberculosis, while helping to prevent autoimmune diseases by supressing the damaging effects of prolonged inflammation. Studies have shown a clear link between vitamin D deficiency and several common immune health problems, however, the innate antibacterial activity of vitamin D seems to be restricted to primates which express the VDR, which poses the question of how valid the studies conducted on mice are in relation to the VDR. I have also described the negative effects of sunlight, such as the production of CPDs through UVR exposure, which leads to the formation of malignant melanomas in some cases. I also touched on the positive effects of prolonged non-burning sun exposure such as increased resistance to sunburn and melanoma development. Overall, it can be seen that there are many health benefits of prolonged sunlight exposure, and no real health risks of sunlight as long as no sunburn occurs.