Cystic fibrosis is a rare autosomal recessive disease that affects roughly 30,000 individuals in the United States. Cystic fibrosis causes damage to the lungs, digestive system, and other organs in the body due to its ability to affect cells that produce mucus, sweat, and digestive juices. In individuals with cystic fibrosis, these secretions become thick and sticky, which causes them to plug up tubes, ducts, and passageways, as opposed to acting as a lubricant. This is a result of a mutation in the cystic fibrosis transmembrane conductance regulator (CFTR) gene, which causes the CFTR protein to become dysfunctional (Cystic Fibrosis Foundation, 2019 and Winikates, 2012).

The CFTR protein is a glycoprotein that is part of the ATP-binding cassette (ABC) transporter family. It is composed of 1,480 amino acids and five domains: two membrane-spanning domains, two nucleotide-binding domains, and a regulatory domain. Typically, the membrane-spanning domains form the channel pores, phosphorylation of the regulatory domain determines activity, and ATP hydrolysis of the two nucleotide-binding domains controls channel gating (Sheppard and Welsh, 1999). The CFTR protein is synthesized in the same manner as all other proteins. DNA in the cell’s nucleus provides instructions to make the CFTR protein in the form of the CFTR gene, which belongs to a family of genes that regulate the energy transfer that allows a cell to open and close its ion channels (Winikates, 2012). RNA acts as a template to make proteins and is created by matching the coded instructions in the DNA through a process known as transcription. From here, ribosomes read the instructions in the RNA and use them to make the CFTR protein through translation. Once the CFTR protein is synthesized, it is moved to the cell surface where it can perform its duties (Cystic Fibrosis Foundation, 2019).

When fully functional, the CFTR protein is responsible for regulating the chloride ion content of epithelial cells that line the nasal cavity, lungs, and stomach. These chloride ions move from the inside of the cell to the outside of the cell by going through the center of the tube formed by the CFTR protein. After the chloride ions have exited the cell, they attract a layer of water, which is important for allowing cilia to sweep back and forth. This sweeping motion is what moves mucus and other debris out of the airways (Cystic Fibrosis Foundation, 2019). 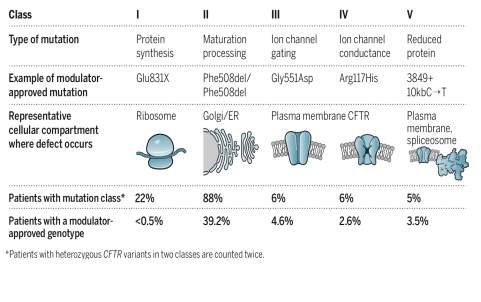 However, if one of the more than 2,500 known mutations of the CFTR gene occurs, the CFTR protein does not work properly (Johns Hopkins Cystic Fibrosis Center, 2019). These many mutations are grouped into six subsets: errors in CFTR protein synthesis (class I), maturation processing of the protein (class II), ion channel opening or gating (class III), conductance through the ion-selective pore (class IV), steady-state protein concentration (class V), and sometimes a separate class is used to specify class V CFTR variants that disrupt plasma membrane stability of the encoded protein (class VI) (Manfredi et al., 2019).  When a mutation occurs and the CFTR protein is unable to function properly, chloride ions are unable to leave the cell, which means that water is no longer attracted to the space outside of the cell, resulting in the mucus in the airways to become dehydrated and thicker. This leads to flattening of the cilia. The flattened cilia are unable to properly sweep when the thickened mucus weighs them down, so the mucus remains in the airways, making it challenging to breathe. Furthermore, pathogens caught in the mucus are no longer expelled from the airway, allowing them to multiply and cause infections (Cystic Fibrosis Foundation, 2019).

Even though there are more than 2,500 known mutations of the CFTR gene, the most common mutation results from the deletion of a single amino acid in the CFTR protein. Termed ΔF508, this mutation is the cause of approximately seventy percent of cystic fibrosis cases due to the deletion of three nucleotides spanning positions 507 and 508 of the CFTR gene, which ultimately results in the loss of a single codon for the amino acid phenylalanine (Bobadilla et al., 2002). ΔF508 causes the CFTR protein to fold improperly during protein synthesis, resulting in its eventual degradation in the endoplasmic reticulum and ultimately its inability to reach the cell’s surface (Maurya et al., 2012 and Winikates, 2012). The pairing of the genes, as well as the number of complements of the mutation, can also affect the CFTR protein in different ways. For example, organisms with two complements of the ΔF508 mutation have the CFTR protein entirely absent from the cell membrane. In organisms with homozygous pair of genes for the ΔF508 mutation, the CFTR protein is prevented from assuming its normal position in the cell membranes, which causes increased water retention in cells and subsequent dehydration of the extracellular space. Finally, organisms that are heterozygous carriers (having a single copy of ΔF508) results in decreased water loss during diarrhea because malfunctioning A majority of the time there is a build up of sodium and chloride ions inside the affected cells, which creates a hypotonic solution outside the cell, resulting in water diffusing into cells by osmosis (Maurya et al., 2012).

Additional irregularities have been observed when the CFTR protein is abnormal, which include defective other channels such as the outwardly rectifying chloride channel (ORCC), the epithelial sodium channel (ENaC), a chloride/bicarbonate exchanger, and other channels. In regards to the ORCC, a normal CFTR protein facilitates the transport of ATP to the outside of the cell, which activates the ORCC. However, the mutant CFTR is unable to transport the ATP, and the ORCC is unable to contribute to adenosine 3′,5′-cyclic monophosphate (cAMP)-activated whole cell chloride currents in cultured human airway epithelial cells. Next, when defective, the CFTR protein influences the ENaC in the lung by decreasing its activity, however, the mechanism by which this occurs is unclear. The chloride/bicarbonate exchanger is responsible for transporting a bicarbonate molecule out of the cell for every chloride ion that is transported into the cell. The chloride is derived from the efflux of chloride through the CFTR protein, so if the CFTR protein is not functional, the activity of this channel is greatly reduced. There are a multitude of other chloride channels present on the surface of epithelial cells that may be affected in the cystic fibrosis airways. These “alternative” chloride channels have been proposed as a therapeutic target to enhance chloride transport (Johns Hopkins Cystic Fibrosis Center, 2019).

Cystic fibrosis is a rare disease that vastly reduces the lifespan of the afflicted individual (average lifespan is 35-40 years old) (Cystic Fibrosis Foundation, 2019). However, as our knowledge of the CFTR gene’s structure and mechanism of the mutation grows, the chance for applying that knowledge to new therapeutic mediums grows. New medications and therapeutic targets are just around the corner, so each and everyday we grow closer to being more prepared in the fight against cystic fibrosis.

Cystic fibrosis is a common autosomal recessive genetic disorder. This means that to have cystic fibrosis, a person must have inherited a defective gene from each of his or her parents. This gene is located on chromosome seven.

Cystic Fibrosis: The Importance of the CFTR Protein

Cystic fibrosis is a rare autosomal recessive disease that affects roughly 30,000 individuals in the United States. Cystic fibrosis causes damage to the lungs, digestive system, and other organs...

The ABCDE structured assessment will be discussed throughout this essay. The ABCDE approach is a tool which Healthcare Professionals use to assess a deteriorating patient quickly and effectively. The ...