The future of teaching hospitals has become very unpredictable and uncertain (Langabeer, 1998). Due to recent changes in healthcare reform, the once stable financial environment that these organizations were able to practice medicine has become extremely competitive in the marketplace which threatens their very existence due to the lack of exposure to such environments and their organizational infrastructures (Langabeer, 1998). As the pressure increases to compete against other similar institutions, it is becoming more evident that executive management has the skills necessary to identify strengths and weaknesses of their organization against their competitors and can effectively create a strategic plan that will ensure the survival of their institution. For the purposes of this paper, a competitive analysis report for Nebraska Medicine will be discussed.

The future of teaching hospitals has become very unpredictable and uncertain (Langabeer, 1998). Due to recent changes in healthcare reform, the once stable financial environment that these organizations were able to practice medicine has become extremely competitive in the marketplace which threatens their very existence due to the lack of exposure to such environments and their organizational infrastructures (Langabeer, 1998). As the pressure increases to compete against other similar institutions, it is becoming more evident that executive management has the skills necessary to identify strengths and weaknesses of their organization against their competitors and can effectively create a strategic plan that will ensure the survival of their institution. For the purposes of this paper, a competitive analysis report for Nebraska Medicine will be discussed.

Effective strategic planning efforts generally entail looking at the current situation and relevant recent history of the organization (Harris, 2018). This assessment also known as the environmental assessment should look at successes and failures of the past to give stakeholders adequate information to allow for the ability to offer constructive solutions (Harris, 2018). This process generally begins with gathering information internally and externally, identifying key variables that need addressed and translate those findings into solutions (Harris, 2018). It is important to be thorough in the environmental assessment because if it is done poorly, the strategic planning efforts can suffer (Harris, 2018).

According to the Census Bureau, Nebraska’s population was over 1.8 million in 2014, which was a three percent increase from four years prior and a ten percent increase for fourteen years prior (DHHS, 2016). Of this population growth, the growth appears to be more evident with older adults, racial minorities and the larger cities in the state (DHHS, 2016). The racial minority population itself grew the most by over sixty percent between years 2000 and 2014 (DHHS, 2016). The greatest growth were non-hispanic asian/pacific islanders having an increase of approximately 25% from 2010 to 2014 and hispanics at approximately 14% in the same time frame (DHHS, 2016).

Furthermore, the urban population increased by a little over 20 percent during that time whereas the rural areas had a population decline of as much as seven percent (DHHS, 2016). Moreover, the average life expectancy in Nebraska is approximately 80 years which is not much higher than the national average (DHHS, 2016). Cancer was found to be the leading cause of death for Nebraskans and has been a greater cause than heart disease for six straight years, but this is largely related to a decreased number of heart disease related deaths rather than an increase in cancer deaths (DHHS, 2016). Heart disease comes in second for leading cause of death, chronic lung disease is third, stroke is number four and finally, deaths by unintentional injuries (motor vehicle accidents, falls, etc) is at number five (DHHS, 2016).

In 2014, approximately fifteen percent of Nebraskans reported not having any insurance, private or public, for those aged 18-64 and this has declined steadily over the years (DHHS, 2016). Furthermore, Nebraska’s population is largely concentrated in the eastern portion of the state and the population has been shown to increase more in the larger urban areas while the small urban cities remain stable (DHHS, 2016). Rural county population continues to decrease and the population that remains in those areas tends to be elderly (DHHS, 2016). One of the most common barriers that Nebraskans report is not having a primary care provider and for those that do have one, they reported that cost was a major barrier to seeing him/her (DHHS, 2016). Another barrier is the varied access to healthcare across the state (DHHS, 2016). The majority of the state has been identified as having a shortage of specialists, dentists, and mental health providers (DHHS, 2016).

Nebraska Medicine is the largest metro hospital in the state and has been nationally ranked in one specialty, identified as a high performer in eight adult specialties, and five procedures (US News, nd). It is one of the oldest hospitals in the region, a teaching hospital and offers a plethora of specialty services offered at this organization including world renowned cancer treatment, gastroenterology, geriatrics, nephrology, neurology, pulmonology, orthopedics, urology, endocrine and many more (US News, nd). Common procedures and conditions treated at this organization include aneurysm repairs, heart surgery, chronic obstructive pulmonary disease, hip and knee replacements and lung cancer surgery (US News, nd). It has been ranked by US News as the number one hospital in the state (US News, nd). However, even with such an impressive resume, the organization appears to suffer in patient satisfaction in comparison to its closest competitors. While generally rated four or five out of five in many categories of patient satisfaction, the following areas have been rated just three out of five and include: satisfaction with doctor’s communications, pain relief, efforts to prevent medication harm, staff responsiveness, room cleanliness, and noise volume (US News, nd).

Harris (2018) notes that while it is important to keep demographic information to make profiles and forecasts for future reference, it should not bear consequence to the strategic planning process. In addition, it is important for organizations to make a general review of trends to make a useful assessment for future plans (Harris, 2018). Moreover, trends in organizational performance, service options, rankings and ratings and data collected from regional, state and national sources are all helpful in determining where an organization should make changes to remain competitive (Harris, 2018). In addition to the demographic information noted prior, for this competitive analysis, a review of six hospital competitors in the region was conducted. Appendix A has the competitive analysis worksheet. In this section, competitive strategy will be discussed.

The Affordable Care Act not only increased the accessibility of healthcare services to more people, but it also tied hospital reimbursement for services to patient satisfaction and quality of care or what is better known as pay-for-performance (Torres, 2017). Therefore, hospitals that focus on these factors will have a greater ability to remain competitive and financially viable. Since Nebraska Medicine appears to excel in comparison to others overall in procedures and services offered and is the only level one trauma center in the country, it appears that the main focus of the organization should be on patient satisfaction. For the short term and long-term, innovations in patient satisfaction and key performance indicators should be top priority. By focusing on these areas, the improvement on patient satisfaction should create brand loyalty.

Also, all of these hospitals are competing for the likes of the same patient demographics and many offer the same services in the realm of procedures. Nebraska Medicine can help also improve patient satisfaction by offering public education by providers for free as St. Elizabeth’s hospital in Lincoln, Nebraska. Community education to the elderly, minority populations and those in low socioeconomic areas would be beneficial to community health and potentially improve the health of these population demographics.

Nebraska Medicine has done well at improving access to healthcare in the region, but perhaps a long-term goal of theirs in the next five to ten years should be to create more innovations for reaching out to those living in rural communities. This could be done by increasing incentives for physicians to relocate to these areas and practice, opening more clinics or even community-based hospitals, community education, and perhaps putting more focus on telemedicine for the underserved areas. Furthermore, hospitals are soon facing a new federal regulation requiring that they are transparent with their charges. Nebraska Medicine should aim to be competitive in pricing in the present and future to promote brand loyalty. Each of these interventions are simple, and yet, can easily prove to be effective if they improve patient satisfaction scores. Finally, regular and routine changes to the environment of the hospital to provide a peaceful ambiance as well as noise reduction, improvements in technology and service delivery, and improvements in patient safety efforts should be a top priority in the present and future.

Healthcare administrators are tasked with the responsibility of continuously improving the organization and bringing in revenue. In order do be effective in their role, they must be educated and/or experienced in the ability to appropriately analyze their environment as the failure to adequately assess their situation can lead to dire consequences for the organization they lead. Leaders must have a clear understanding of the reality of healthcare today in that it is now focused on the population it serves, how to provide value-based care through evidence based practice, achieving adequate employee satisfaction via incentives and rewards and finally, by finding ways to reduce costs (Gamble, 2012). Most importantly, they must be the cultivators that foster change in the organization (Gamble, 2012). Great healthcare administrators communicate the strategic plan and help others understand the necessity of the organization’s actions. The ability of the leader to facilitate a culture of change when necessary is the most important piece of their role (Gamble, 2012).

In this competitive analysis report, key population demographics for the state of Nebraska, a background of Nebraska Medicine, analysis of competitors and suggestions for future improvement have been discussed that can offer areas of improvement for Nebraska Medicine. It is important for the healthcare administrator to choose a general focus of improvement to be successful in the strategic plan and it seems in this case, Nebraska Medicine can remain competitive by focusing on the value they can offer their patients by improving their perception of satisfaction with the service they receive and improving the health of the underserved community. Regardless of the outcome, the administrator owns the strategic plan and is fully accountable for the outcome.

One of the most important responsibilities of an educator is selecting teaching and learning strategies that are related to the desired aims and outcomes of the curriculum, appropriate to the student’s level of skills and knowledge and challenging enough to motivate learning. 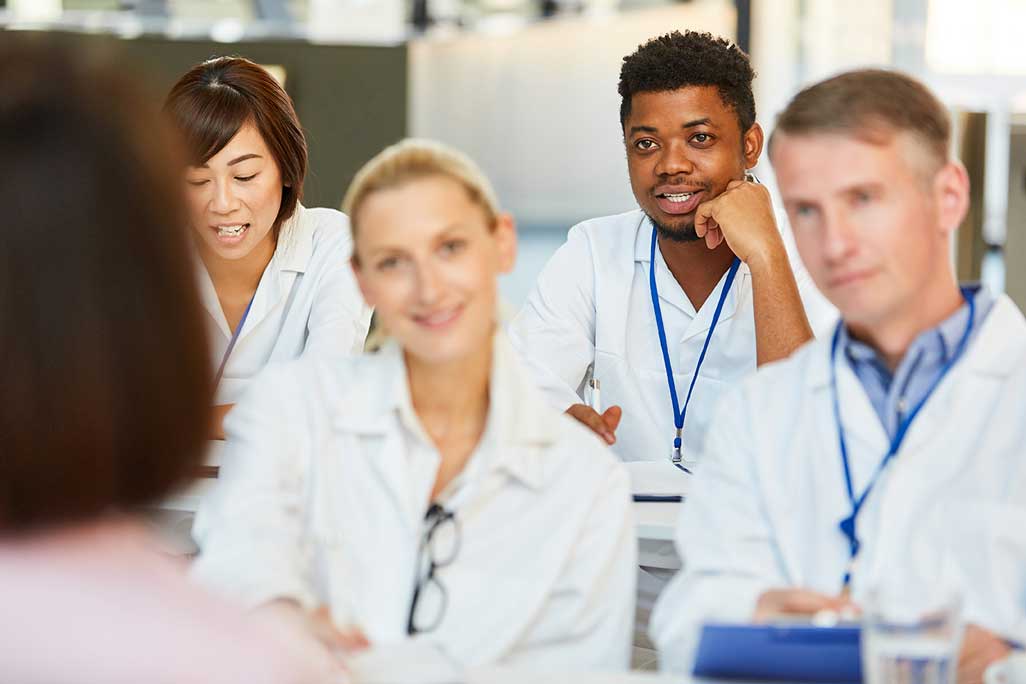 Students feedback is an indicator of the success of any teaching methodology followed in a department. AIM/OBJECTIVE: To identify strengths and weaknesses in the current teaching-learning and evaluati...

INTRODUCTION Clostridium difficile infection (CDI) is a major cause of infectious diarrhea in hospitals (1). CDI has been associated with an increase in morbidity, hospital length of stay, medical exp...