Problem: Too many teenagers are becoming anorexic.

Question: What are researchers doing to prevent it?

Anorexia nervosa is a huge issue among men and women of all ages. Anorexia Nervosa, or anorexia for short, is a disease that too many people get. There are a wide range of reasons why people may become anorexic. Anorexia nervosa normally occurs during puberty, and occurs in more females than in males, but some males do have anorexia too. There are two types of anorexia. One type is linked to another common eating disease called Bulimia, where a person will binge eat and then throw up afterwards to try and get rid of it. The second type is restricting yourself completely of food. It is the obsessive fear of gaining weight, and so individuals will try to control their body weight by starvation, purging, vomiting, excessive exercise, and the use of diet pills.

Anorexia nervosa is a biological issue, and there are many of biological reasons behind it. Research gives us reason to believe that anorexia nervosa is often inherited, and can often run in families. Recent research suggests that inherited and biological factors increase a persons chance of becoming anorexic by 55%, and a teenage female who has a sibling or parent/guardian with anorexia are twelve times more likely to become anorexic themselves. Also, studies show that identical twins have a higher chance of becoming anorexic. This may because they are identical, but one could feel like the other is slimmer, prettier, taller, and a lot more things that teenage girls often think about, causing them to have major self esteem issues. Identical twins have a higher chance of becoming anorexic than fraternal twins or ordinary siblings. There is a brain structure called hypothalamus, which is the brain structure responsible for regulating eating disorders. Neurotransmitters carry a message from cell to cell in the brain and nervous system. This transmitter affects binging behaviour in bulimics and anorexics. To meet the criteria of having anorexia, a person’s body weight needs to be 85% less than what is expected. An estimated 53.7% of women will suffer from anorexia in their lifetimes.

In August 2013, as many as 10 in 100 females in the US suffered with Anorexia, but figures are increasing all the time. “The Guardian” published an article on 30th January 2014 with the title “Rise in hospital admissions for young people with eating disorders”, which says that the most common age for anorexics to be in hospital is 15 years old. It also says that in October 2013, there was an 8% rise in anorexics to be admitted to hospital. In “The Independent” on Sunday 16th November, it has an article named “Eating disorders soar among teens – and social media is to blame”. In this article, it says the number of children and teenagers seeking help for an eating disorder has risen by 110% over the last three years, which is shocking. ChildLine says it has received more than 10,500 calls from teenagers struggling from with food and weight-related anxiety in the past year. The rise in anorexia can be because of social media, school stress, self esteem issues, and the growth of celebrity culture. 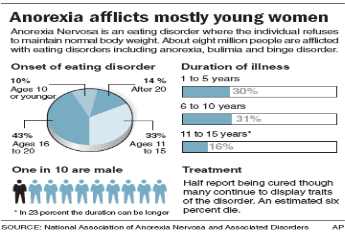 This graph shows that the highest percentage of people with anorexia is ages 16-20. The BBC news estimates that 165,000 people are suffering from anorexia and 10% of deaths are because of it. Children as young as three have been hospitalised with anorexia.

So what are we trying to do about it?

Scientists in the UK are examining the DNA in people with anorexia in the hope that they will understand why some people get the disorder and others do not. They believe there is a link between genetics and eating disorders, and they think they can try to predict who could be at risk. Researchers are trying to determine the impact of the brain, hormones, genetics and appetite control biology on people with anorexia. Researchers believe that the Alzheimers drug may be used to prevent people from binge eating. Memantine, which is found in the drug, is also what the area in the brain which causes people to binge eat facilitates. According to Science daily, researchers used an experimental model to simulate binge eating behaviour, and they were able to “identify the area of the brain associated with binge eating and then suppress the area by applying memantine directly to that area. There are some problems with this idea, however. If they think that taking memantine will reduce the risk of binge eating or anorexia, a person would have to eat before taking it, which is not what people with anorexia would wish to do. Scientists have looked at the environment, genetics, personalities and biochemistry in people with anorexia, but the more that is learned, the more complex it appears.

To understand people with eating disorders, scientists are looking at the neuroendocrine system, which is a combination of the hormonal system and the central nervous system. This system regulates multiple functions of the mind and body. Many of these mechanisms are disturbed in people with anorexia. Scientists have been able to show that excess levels of cortisol in anorexia are caused by a problem in or near the hypothalamus.

The ANITT (Anorexia Nervosa Intensive Treatment Team) service is a step below specialist inpatient care and a step above outpatient therapy. It is for people who may not need or benefit from inpatient care. This programme includes group and individual therapy, dietetic and psychiatric therapy. 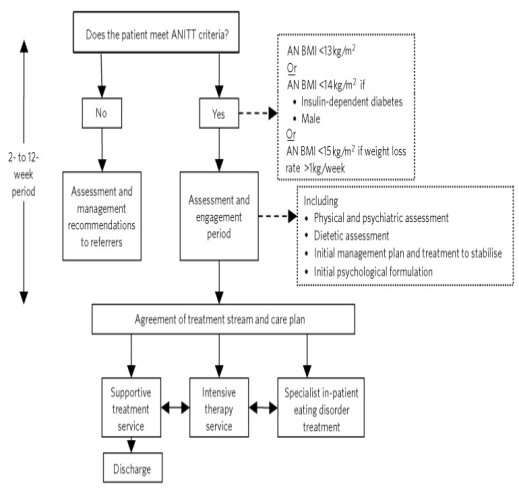 The diagram above shows the criteria for ANITT and and the care plan and treatment services offered. I think the ANITT programme is a good idea and will help teenagers overcome their problem because it works with the person, not against them, and the diagram shows them exactly hat to expect, so they know what is coming, and it also gives them another option besides becoming a patient in the hospital, which may scare the teenager and force them not to cooperate. At least, which this service, they get a choice.

They will hopefully work with the dietitian and become a stable weight. This will take time but when they are at a “safe weight”, it will gain trust between patient and dietitian. Then the patient will go to therapy for eighteen months, twice a week. After the eighteen months are over, the patient will go to reduced-intensity therapy for six months, but it will not be as extreme. After these two years are over, the patient will either be discharged, continue with another six to twelve months of therapy, or proceed to support treatment services. The patient will only be discharged if they want to or if they have achieved a full and good recovery. If the patient goes to support treatment services, they will be focusing on improving the quality of the patients life, physical and psychological risk management and gaining a good relationship with the team. This treatment is more flexible and varied than the others, which I think may appeal to patients. They also work with the patients to make realistic goals, and helping them overcome barriers, rather than working against the patients. The patients who used this programme said that the staff were supportive, and the care they received was brilliant. I think this programme is extremely effective because teenagers are not taken away from their families, which is brilliant because I think this is the time in a person’s life that they need family the most, so taking them away will not improve the problem or benefit the child at all.

According to the National Association of Anorexia Nervosa and Associated Disorders (ANAD) (1), almost 50% of people with anorexia meet the criteria for depression. Only 1 in 10 people with anorexia receive treatment, (2), and up to 24 million people in the USA suffer from an eating disorder, (3). According the the National Spectrum of Eating Disturbances, about 91% of surveyed women on a college campus have admitted to controlling their weight through dieting, (4). It says 95% of people with eating disorders are between the ages of 12 and 25, (5), which shows that it mostly occurs in teenagers, because of stress and eagerness to “fit in”. According to The National Institute of mental Health, women are much more likely to develop an eating disorder than men, and only an estimated 5-15% of those who have an eating disorder are men, (6). According to The Renfew Centre foundation for eating disorders, the body image portrayed on television is something only 5% of people possess naturally, (7). I think all girls need to know this because they are extreme dieting to be like someone who is portrayed falsely. If they knew their idol’s real weight, rather than what they are seeing on television, I think there would be a lot less teenagers with anorexia, because according to Prevention of Eating Problems with Elementary Children, 47% of girls in 5th-12th grade reported wanting to loose weight because of magazine pictures, (8), and according to IBID, 69% of girls in 5th-12th grade reported that magazine images influences their idea of a perfect body image, (9). This is why I think it is so important that the media should stop falsely portraying these actors and actresses and models, and let girls see what they are really like.