A rare case of secondary narcolepsy was seen in a patient with self-inflicted genital injury. A 30 year old male was referred to Psychiatry from Surgery for a self-inflicted incised wound on hydrocoele. Since last 1 year, he had multiple episodes of — 1. Sudden falls while working 2. Sleep during daytime often at unusual places 3. Periods of unresponsiveness during which he was aware but unable to move. During hospital stay, daytime somnolence, sleep paralysis and cataplexy were noted several times, but hallucinations were not consistently reported. Based on DSM-IV-TR Narcolepsy was diagnosed. Possible reasons for genital injury were 1. To remove fluid from swelling 2. Under sleep paralysis 3. Under Hypnogogic hallucinations. Patient’s EEG was normal. MRI brain showed Gliosis at cervico-medullary junction.MRI spine was advised to examine the cervico-vertebral junction but patient was lost to follow-up. But from history and investigations, it was concluded that he had secondary narcolepsy due to traumatic brain injury.

Narcolepsy typically begins in the 2nd and 3rd decades of life and negatively impacts the quality of life of affected patients. Diagnosis relies on patient history and objective data gathered from polysomnography and multiple sleep latency testing. Treatment focuses on symptom relief through medication, education, and behavioural modification.

Introduction:[D2] Narcolepsy is neither a type of epilepsy nor a psychogenic disturbance. It is an abnormality of the sleep mechanisms specifically, REM-inhibiting mechanisms and it has been studied in dogs, sheep, and humans. Narcolepsy can occur at any age, but it most frequently begins in adolescence or young adulthood, generally before the age of 30. The disorder either progresses slowly or reaches a plateau that is maintained throughout life.[2]. The prevalence of narcolepsy varies across countries and with different ethnic groups, and so the exact prevalence is not known. Prevalence estimates have been reported to be between 168 and 799 per 100,000 in most studies, although Japanese studies have indicated a higher prevalence of 1600 per 100,000.[2,3]. There are no genetic tests currently available for clinical use to make a positive diagnosis of narcolepsy. Genetic testing may correlate best to narcolepsy when there is already clear cataplexy.[4].

Supporting the evidence for an environmental influence is the fact that the disease is not apparent at birth, but instead commonly has its onset during the second decade of life. Additionally, there are apparent precipitating factors such as head trauma, infection, and changes in sleep-waking habits that have been identified in some cases.[6] Chronic, daytime sleepiness is a major, disabling symptom for many patients with traumatic brain injury (TBI), but thus far, its aetiology is not well understood. Extensive loss of the hypothalamic neurons that produce the wake-promoting neuropeptide hypocretin (orexin) causes the severe sleepiness of narcolepsy, and partial loss of these cells may contribute to the sleepiness of Parkinson disease and other disorders. One study has found that the number of hypocretin neurons is significantly reduced in patients with severe TBI. This observation highlights the often overlooked hypothalamic injury in TBI and provides new insights into the causes of chronic sleepiness in patients with TBI.[7] Amphetamine usage has been associated with addiction, psychosis and self-injurious behaviour. There are reports on two patients who severely and repeatedly mutilated their own genitalia while intoxicated on amphetamines and consider possible diagnostic aetiologies.[8] Genital mutilation is common in males compared to females.[9] But narcolepsy presenting as self inflicted genital injury has not been reported so far. That is why this is a rare case.

Case History[D3]: A case of secondary narcolepsy was seen in a patient presenting as self-inflicted genital injury. A 30 year old Hindi speaking illiterate male was referred to Psychiatry from Surgery for a self-inflicted incised wound on hydrocele. After primary wound closure at surgical side, patient was taken transfer to Psychiatry for detailed assessment. When detailed history was obtained from patient’s elder brother and father, it was found that since last 1 year, he had multiple episodes of sudden falls while working at kitchen as he was a cook. He used to sleep during daytime often at unusual places like in the courtyard, once over the road and sometimes in bathroom. Patient also had periods of unresponsiveness during which he was aware but unable to move himself even on painful stimulation. During hospital stay, daytime somnolence, sleep paralysis and cataplexy were noted several times, but hallucinations were not consistently reported. Based on DSM-IV-TR Narcolepsy was diagnosed. Possible reasons for genital injury were 1. To remove fluid from swelling 2. Under sleep paralysis 3. Under Hypnogogic hallucinations. Patient’s EEG was normal. MRI brain showed Gliosis at cervico-medullary junction.MRI spine advised to examine the cervico-vertebral junction but patient was lost to follow-up. But from history and investigations, it was concluded that he had secondary narcolepsy due to traumatic brain injury

Discussion: Narcolepsy is a condition characterized by excessive sleepiness, as well as auxiliary symptoms that represent the intrusion of aspects of REM sleep into the wakingstate. The sleep attacks of narcolepsy represent episodes of irresistible sleepiness, leading to perhaps 10 to 20 minutes of sleep, after which the patient feels refreshed, at least briefly. They can occur at inappropriate times (e.g., while eating, talking, or driving and during sex). The REM sleep includes Hypnogogic and Hypnopompic hallucinations, cataplexy, and sleep paralysis. The appearance of REM sleep within 10 minutes of sleep onset (sleep-onset REM periods) is also considered evidence of narcolepsy. The disorder can be dangerous because it can lead to automobile and industrial accidents. 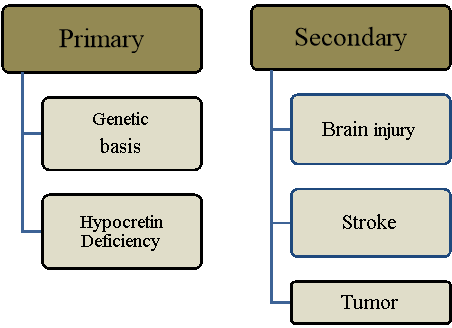 Other symptoms include Hypnogogic or Hypnopompic hallucinations, which are vivid perceptual experiences, either auditory or visual, occurring at sleep onset or on awakening. Patients are often momentarily frightened, but within a minute or two they return to an entirely normal frame of mind and are aware that nothing was actually there. Here patient had symptoms of narcolepsy after head injury and patient himself injured his scrotum with sharp blade for which he had no clear memory and there was no history suggestive of epilepsy so diagnosis of secondary narcolepsy presenting as self-inflicted genital injury was considered.In this case, patient showed clinical features of narcolepsy as diagnosed by DSM- IV which was secondary type as there was history of multiple falls and MRI brain showed gliosis. But in this case, unusual presentation was genital self-inflicted injury.

Possible reasons for genital injury are:

No cure exists for narcolepsy, but symptom management is possible. A regimen of forced naps at a regular time of day occasionally helps patients with narcolepsy and, in some cases, the regimen alone, without medication, can almost cure the condition. When medication is required, stimulants are most commonly used.[10]

Although drug therapy is the treatment of choice, the overall therapeutic approach should include scheduled naps, lifestyle adjustment, psychological counselling, drug holidays to reduce tolerance, and careful monitoring of drug refills, general health, and cardiac status.

[D2]1 Please include why this case is unique. If it is rare, how rare, how many cases have been reported.

[D3]1 Include the tables/charts at appropriate places in the text it self. Do not include images in the text. Mark the point of insertion of images (e.g. Figure 1) along with the legends. Send the images separately as jpeg files (not larger than 100 kb each)

[D4]1 Follow the punctuation marks carefully. Do not include unnecessary bibliographic elements such as issue number, month of publication, etc. Include names of six authors followed by et al if there are more than six authors.

Sleep is a complex physiological process that occurs in some extent in all animals, indicating its physiological importance. Sleep plays an important and intrinsic role in many behavioural and physiological functions.

Impacts of Sleep Quality on Health

Getting the Zzzz’s Have you ever wondered why many people are so chipper in the morning? Some people are just naturally that way while some people aren’t. It mainly comes down to ge...

Literature Review On Sleep and Obesity

Duration of sleep, the quality of sleep, and the frequency of sleep are topics for discussion when it comes to research into the world of sleep and its consequences on our bodies and health....

Effect of Sleep on Health and Well-being

In this essay, will be assessing what magnitude sleep has on our day to day well-being. Sleep is one of the essential requirements for the human body to function accurately. It plays a crucial role in...