The brain is the primary organ of the centre nervous system that controls our body and houses our mind. It is metabolically active and dependent on a continuous supply of oxygenated blood. If the blood supply is interrupted, the brain could not function normally, resulting a rapid appearance of focal or global disturbance of cerebral functions and its consequent neurological symptoms. If deprived of oxygen for 20s, the brain falls into unconsciousness as the electrical activity cease due to energy depletion. This can become irreversible if it extends beyond 5 min when permanent damage has been made[1].

In this PBL scenario, a 67-year-old Caucasian woman who has a 15 pack-year smoking history arrived in A&E with ipsilateral weakness of both her right upper and lower limb, difficulty speaking and is known with atrial fibrillation and hypertension. Her current medication is warfarin and amlodipine. Clinical presentation and further investigation suggests that she had a stroke.

To further understand the cases in more details, four learning objectives below are proposed in attempt to cover the knowledge necessary to explain the scenario in this PBL:

Term to be clarified:

(a) Warfarin: An anticoagulant to reduce the risk of blood clotting by inhibiting vitamin K epoxide reductase. It

decrease the levels of active vitamin K and thus lowered the efficiency of blood coagulation cascade.

of blood vessels. As a result, vasoconstriction is inhibited and thus reducing the blood pressure.

Formula: No. of pack year =

when the sole of the foot is stimulated with a blunt instrument. The toes flex as a

result. This is to disregard the Babinski sign (the toes extend and fans out), which 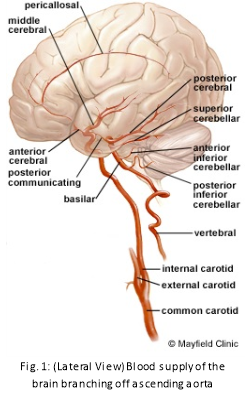 The brain constitutes just about 2% of the body weight but demands 20% of the available oxygen and 15% of the cardiac output[3]. Blood is supplied to the brain via two sets of branches from the dorsal aorta, which forms the anterior and posterior circulations. The anterior circulation supplies the forebrain and the deep structures such as the basal ganglia, thalamus, and internal capsule entering through the carotid canal and foramen lacerum by making a stepwise turn; whereas the posterior circulation supplies the structures of the posterior fossa (posterior cortex, midbrain, cerebellum and brainstem) entering the skull cavity through the foramen magnum. 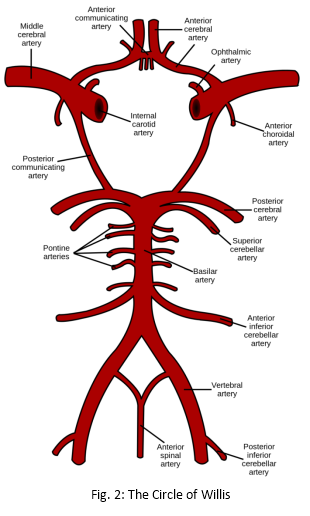 The two circulations are united at the base of the midbrain around the optic chiasm by a network of arteries called the Circle of Willis (Fig. 2).

Looking at the anterior circulation of the Circle of Willis, which arises from the ICA, the ophthalmic artery can be observed. It supplies the orbit, the eye muscles and the retina, and eventually connects to the external carotid arteries.

The MCA is the largest and thus the most important branch of the ICA due to its clinical relevance as the common site of stroke. It receives 80% of the carotid blood flow and its proximal part gives off deep branches- lateral and medial striate arteries supply corpus striatum and the internal capsule regions of the brain. Occlusion of these deep arteries is the chief cause of classic stroke, and the most common location is the putamen and internal capsule. 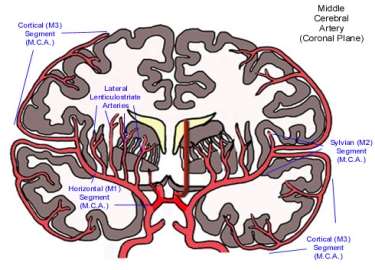 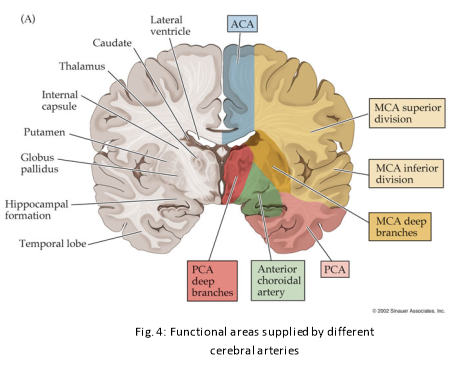 The disability experienced by the stroke patient depends on the area of brain tissues damaged due to cerebrovascular accident in one particular or more blood supply of the brain. Figure 4 illustrated the functional areas supplied by individual cerebral vasculature.

Figure 5, on the other hand gives a few examples of possible symptoms caused by damage from strokes in different areas. In the interest of this PBL scenario, damage in Broca’s area lead to expressive aphasia; damage in Wernicke’s area provokes receptive aphasia; damage in both respective area will then prompt to global aphasia. 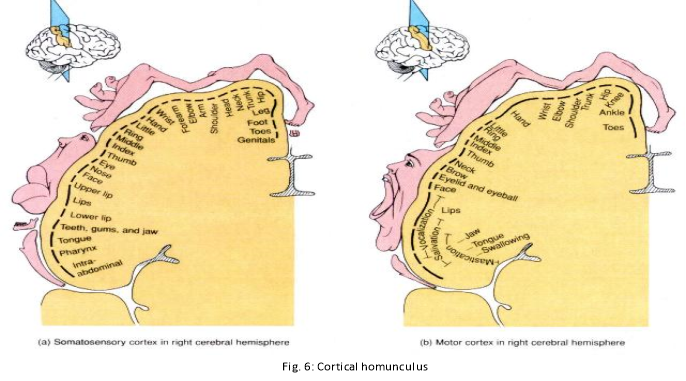 Having compared the homunculus of the somatosensory and motor cortex as shown above (Fig. 6) to the functional area supplied by cerebral arteries (Fig. 4), the legs to the hips is on the medial surface of the cerebral cortex that is supplied by the ACA. Therefore, even though, the MCA is occluded in this scenario, there is not complete paralysis in the legs.

Stroke occurs approximately 152,000 times a year in the UK in which men are at a 25% higher risk of having a stroke and at a younger age compared to women.[4]

It is defined as the temporary or permanent loss of function of brain tissues caused by interruption of the vascular supply. It is subdivided into:

Risk factors of stroke can be classified into:

Ideally, when stroke is suspected, a brain CT scan is arranged immediately to differentiate the type of stroke: Haemorrhagic or ischemic stroke, which determine the treatment option that are significantly different.

In practice, non-contrast CT is usually not sensitive in diagnosing ischaemic stroke or cerebral infarction in an emergency situation but is a quick method to identify acute haemorrhage in the brain, as a pool of blood will show up in white and disqualify the use of thrombolytic or clot-buster. As the time passes (first 24 hours) loss of grey-white differentiation would be shown on the CT that could suggest signs of infarction.[5][6] This is the why the patient in this case did not present any sign of stroke at 7:05am on the head CT.

If an ischaemic stroke is diagnosed as in the case of this PBL, and it has been less than four and a half hours since symptoms started, Alteplase will be given intravenously, while haemorrhagic stroke can be managed with surgical repair.[7]

Life after stroke can be very difficult and challenging. Rehabilitation is necessary to improve quality of life and the eventual outcome, if not full function of the body.

(3) Secondary Prevention 3 in 10 stroke survivors will suffer another stroke or TIA.[8] That is why secondary prevention is much importance. Seeing the fact that the patient as illustrated in this case has atrial fibrillation and is on warfarin but still encountered a stroke attack, a close monitor of warfarin INR should be done afterwards and possible increase in doses or change of medication. Healthy lifestyle that covers the diet and exercise should be recommended and implemented.

How well a patient does after acute ischaemic stroke depend on numerous factors, such as the area of brain tissues is damaged, the affected body function, and the time of appropriate treatment is received.

Generally, patient often improves in moving, talking and thinking in the weeks to months after a stroke and undergoes rehabilitation. However, they do suffer some sort of morbidity. Only roughly 30% of patients are neurologically normal or near normal. Fortunately, about 50% of patients are completely or almost completely independent in daily living.[9]

[6] Adams HP Jr, et al. Guidelines for the management of patients with acute ischemic stroke. A statement for healthcare professionals from a special writing group of the Stroke Council, American Heart Association. Stroke 1994; 25: 1901-1914.

Aphasia has many etiologies, such as stroke, infection, brain abscess, brain tumour, nutritional deficiencies, or toxemia. However, the most common cause of aphasia in adults is cerebrovascular accident, which includes several types and classifications for aphasia.

Written by: Yung Bing Yong Introduction The brain is the primary organ of the centre nervous system that controls our body and houses our mind. It is metabolically active and dependent on a continuou...

Impact of Aphasia on Health and Well-being

Abstract This discussion paper considers the impact of aphasia on health and well-being, and following an in-depth exploration of relevant literature, provides suggestions for appropriate nursing inte...

Stroke The Causes And Effects Health And Social Care Essay

In this assignment I discuss Paul who is a 65 year old male and has suffered a stroke. My aim is to explain what a stroke is, the causes and effects, and give you my understanding of how I as a Healt...