The use of certain medications in geriatrics when potential risks outweigh the potential benefit and an effective alternative is available is called as Potentially Inappropriate medication. Because geriatrics are more sensitive towards adverse effects of medications. Beers criteria which is updated and reviewed by American Geriatric society list out 53 medications/therapeutic classes of drugs to be avoided in geriatrics. Methodology: A prospective observational study was conducted for 9 months in a 650 bed private corporate hospital, South India. All geriatric patients admitted in the hospital during the study period was included. Beers Criteria 2013 were used to identify potentially inappropriate medications. Result: The prevalence of PIM use (52%) was significantly higher in study population. An avg of 10 drugs were taken by the study population. A total of 215 medications were identified as PIMs. Among them 195(90%) medications should be avoided by the geriatrics independent of their condition (category I). 66(60%) of the study population had used more than one PIMs. 91(83%) of the PIM users had atleast one DRPs and the mean DRPs value of the PIM users were 1.59ï‚±1.3. Conclusion: High prevalence of PIMs in the study population signifies the need of monitoring geriatric prescriptions.

Greater attention is needed for geriatric population due to age related pharmacodynamics and pharmacokinetic changes. But appropriate pharmaceutical care for elderly are determined on the basis of clinical trial conducted with adult population.(6) The burden of harm resulting due to the use of multiple drugs in geriatric populations is a major health related problem in developed countries. A research study reveals that around one in four geriatrics admitted to hospitals are prescribed with at least one inappropriate medication and potentially preventable adverse drug reactions accounts for nearly 20% of all inpatient deaths (7).

The assessment of potentially inappropriate medication (PIM) in geriatric is a challenging work and there is a need for considering many factors which influences the prescribing as well as outcome. Eight well known tools are available to identify the PIMs and studies reports that Beers criteria is the best and easy one to assess the PIMs. Beers criteria also has the advantage over others because it is periodically updated (8).This study therefore aimed to investigate the prevalence of PIM use on geriatric population using Beers criteria 2012 and its association with Drug Related Problems (DRPs) .

Exclusion criteria: The patients who are unwilling to participate in the study and out patients

METHOD: A regular ward rounds was carried out in all the wards of General medicine. Each patient’s medication profile was reviewed. Patients who met the inclusion criteria were briefed on the project with the help of patient information form and if they are willing to participate in the study their consent was obtained. The data from medical chart were recorded in customized data entry form.

The prescribed drugs were evaluated and PIMs use were identified with the help of Beer’s criteria. The drugs which are identified as PIM are categorized into following:

ADRs associated with PIMs use were assessed. Drug interaction and ADR was monitored and reported. DRPs and Drug Risk Ratio (DRR) were calculated for PIMs. DRPs were the sum of ADR, drug interaction and drug allergy.DRR was calculated as the number of DRPs in relation to how often the drug was used (DRPS/number of times used).

The number of drugs prescribed for the PIM users were calculated (fig no: 2). The mean number of drugs per prescription was 9.9±2 with the maximum of 16 drugs and minimum of 5 drugs prescribed. The above results signifies that all prescriptions were in polypharmacy category. A similar study conducted by Blozik E (12) concluded that one of the main factor for PIM use is “polypharmacy”.

The DRP among the PIM users were analyzed (fig no: . It was found that 19(17%) of the PIM users were free from DRPs. Majority of the study population had at least one drug related problems. The mean value of DRP in the study population was found to be 1.59±1.3. The minimum observed number of DRP per patient was one and maximum observed number of DRP per patient was six.

The ADR use was monitored in the study population. A total number of 40 ADR associated with PIM use (Fig no:5) and 14 ADR associated with nonPIM use were identified. The study result reveals that one among three PIM users were found to have at least one ADR. A similar study conducted by N. Nixdorff et al (2008) were also reported that PIM users were found to experience ADR most frequently than nonPIM users.

Drug risk ratio were calculated for the study population (table no:7). It was observed that prochlorperazine had the highest DRR (4) followed by phenobarbitone (2), digoxine (2), pentazocine (2) and duloxetine (2).

The statistical analysis of obtained results has been done using statistical tools. The association of different variables are analyzed using ï£2 test.

This result proves that DRPs is more associated with PIMs than polypharmacy which means it not the number of drugs contributing to DRPs but the use of PIMs.

Our study identified a high prevalence of PIMs use and associated DRPs in the study population. DRPs due to PIMs is preventable. Development and implementation of new criteria or modification of already existing criteria such as Beers criteria, START STOPP criteria which will helps in safe prescribing practice can reduce the PIMs use.

Table no:1 Number of PIM per Prescription

Table no:2 Categories of PIM

Table no: 3 Category 1(PIM drugs/classes to be avoid in geriatrics)

Table no: 4 Category II (PIM to be avoided in certain pathological condition)

Table no: 5 Cateegory III (PIMs to be used with caution)

Table no:6 Categories of Drug Interactions

Table no:8 Association of no. of comorbidities with no. of drugs and PIMs

Table no: 9 Association of no. drugs and no. PIMs

Table no:10 Association of DRPs with no. of drugs and PIMs

Fig no:1 Prevalence of PIMs 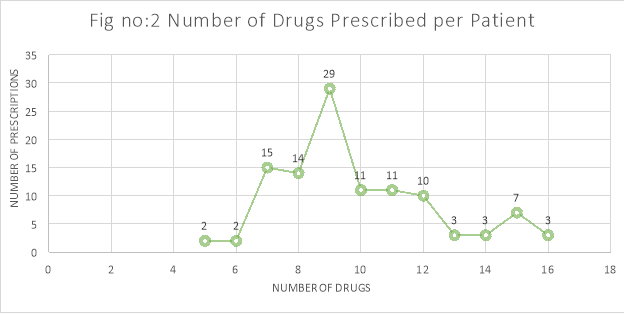 Fig no:2 Number of Drugs Prescribed per Patient 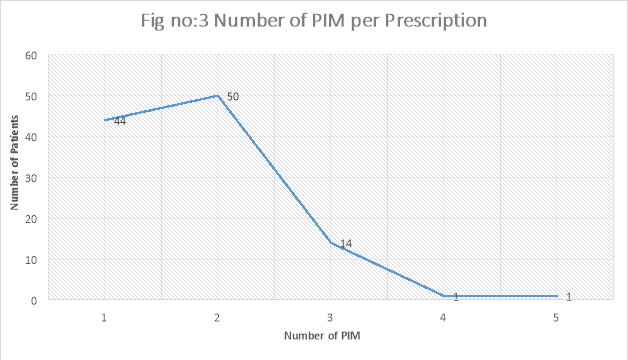 Fig no:3 Number of PIM per Prescription 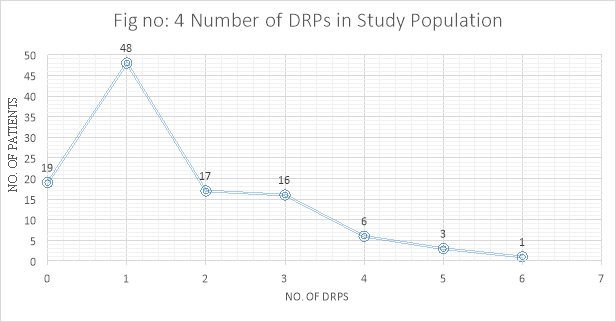 Fig no: 4 Adverse Drug Events and Its frequency

Fig no:5 Adverse Drug Events and Its Frequency

Medications are classified in multiple ways. One of the key divisions is by level of control, which distinguishes prescription drugs (those that a pharmacist dispenses only on the order of a physician, physician assistant, or qualified nurse) from over-the-counter drugs (those that consumers can order for themselves).

A critical analysis of medication errors in relation to management

‘The process of medication use is a continuum of activities involving multiple health care professionals and multiple steps (that is, prescribing, transcribing, dispensing, administering, and mo...

Acute coronary syndrome (ACS) patients have a higher rate of death after hospital discharge due to recurrent ischemic events (2017). The use of guideline directed medications, when used appropriately, has been shown to reduce the risk of death by 50 percent...

In order to improve medication safety, it is recommended that nurses undertake a variety of pragmatic steps. The primary principle of this paper is to establish the theoretical importance of the nurse...