Compare and contrast the use of X-radiation for diagnostic and therapeutic purposes.

Radiation is energy that comes as a form of either a wave or as energised particles. In a radiation spectrum, at the lower end is considered harmless, these include radio waves and microwaves. [1] Whereas at the higher end of the spectrum beyond the ultraviolet range is where ionising radiation can be found, these consist of x-rays and gamma rays. In medicine, ionising radiation can be useful for both diagnostic and therapeutic radiation. [1] However, ionising can have adverse effects on the human body as it can damage tissues, gene and DNA, therefore it is important to control the exposure and compare the risk and benefit of the imaging/treatment in clinical settings. [1]

X-ray was first invented in 1895 by Wilhem Roentgen who was experimenting with electric currents through cathode ray tubes which were covered in thick black cardboard. [1] While Roentgen was experimenting, he realised that a screen nearby covered in barium platinocyanide had become bright due to the radiation emitted from his experiments. [1] Roentgen then projected an image of his wife’s hand on the screen which created a contrast between his bones and flesh, this became the first x-ray image captured. [1]

X-rays are made using x-ray tubes, which is uses a heated filament made of tungsten and consist of an anode and cathode. [2] The cathode produces electrons through a process called thermionic emission. [2] Once there are electrons emitted it will be attracted towards the positive anode and the tube will use voltage (kVp) to accelerate the electrons so that the electrons can gain kinetic energy to hit the target (anode). [2] This allows for x-rays to be produced. [2] In an x-ray tube the electrons are accelerated at a voltage usually between 30-150kV from the cathode towards the target anode. [10] The number of electrons being produced is measured in milliampere (mA), whereas the kinetic energy of an electron is measured in keV. [2] Also, the tube voltage, current and time exposure can be controlled by the individual. [2]

In an x-ray tube, there are two ways x-rays can be produced, they are called bremsstrahlung and characteristic x-rays. [2] Bremsstrahlung produces a continuous spectrum, the electron when injected from the cathode will be attracted to the positively charged nucleus of the atom. [2,6] The electron will break around the nucleus due to electromagnetic interaction, causing the electron to decelerate and lose energy. This will cause a photon (x-rays) to be emitted. [2] The energy of the emitted photon will depend on the energy of the incident electron which was emitted from the cathode. [6] Whereas characteristic radiation produces discrete x-ray energies. [6] A projectile electron will hit an electron within the inner shell of the atom, knocking the inner electron out of the shell. [6] Another electron from a higher shell will be attracted to the vacancy in the inner shell as the original electron has been kicked out. [6] The higher shell electron will move to the inner shell, hence the difference in energy between the shells when the electron moves will be produced as a monoenergetic photon. [6]

Units for dose and exposure

In radiation science, there are several units for radiation dose and exposure used. [9] The units can come in two forms, conventional and S.I units. [9]

In the following table below shows each of the conventional and SI units for the absorbed dose, radiation exposure and dose rate.

There are four ways x-rays interact with matter such as tissue, these include the photoelectric absorption, Compton scattering, pair production and Rayleigh scattering. [3] The two main modes of attenuation in diagnostic radiation are the photoelectric absorption and Compton scattering. [3] Whereas pair production and Rayleigh scattering although present does not have a significant attenuation on patients. [3] Therefore, to enhance diagnostic utility during an examination, radiographers will have dedicated mammography equipment and contrast materials to utilize the different types of x-ray interactions. [3] The type of x-ray interaction will depend on the exposure parameters, the type of tissue being imaged and the x-ray target and filter combinations. [3] Once all these factors are taken into consideration, a predominate x-ray interaction will be chosen and in turn will affect the amount of dose a patient is exposed to, the quality of the x-ray image and the utility of diagnostic testing. [3] In diagnostic radiology it is important for a radiologist to produce the highest quality diagnostic image while trying to have minimal scattering radiation and proper contrast between tissues by controlling the x-ray attenuation. [3] Controlling the attenuation and having minimal scattering is critical in diagnostic radiography, as radiographers must obtain a high-quality x-ray image while achieving the lowest dose possible to minimise the amount of radiation a patient absorbs. [3]

The total mass attenuation coefficient is a measure of how photon energy penetrates the material, therefore it can be a way to evaluate the usage in dosimetry of human tissues and organs. [4] It is important in the medical field to understand how much radiation dose and contrast occurs as each of the 4 different x-ray interactions can interact with the human tissue in different ways. [3,4] Hence, in the following paragraphs below will explain how 3 different x-ray interactions in diagnostic radiation, interact with human soft tissues.

The photoelectric absorption is another important interaction that occurs in diagnostic imaging. In the photoelectric effect, the incident photon will collide with an inner valence electron (k or L shell) of a patient. [3] As depicted in figure 2, once the incident photon collides with the inner electron, it will transfer some energy to the inner electron causing the inner electron to become free (ejected). [3] The ejected electron becomes a photoelectron and atom will become ionised and excited. [3] The vacant spot of the inner shell will attract an electron from the outer shell, therefore the outer shell electron will move to the vacant spot. [3] The difference in the energy between the shells will be released as a low energy photon or characteristic x-ray. [3] In diagnostic imaging, the photoelectric effect will predominate in materials such as lead and sodium iodide which have low energy photon but a high atomic number. [3] However, in patients the photons are absorbed by their atoms and this will create a contrast in the image, which will come out as white on the film detector. [11]

Images produced in diagnostic radiology is produced due to the incident x-ray beam containing a quantity of x-rays and by the amounts of non-interacting photons that are present on the x-ray film. [5] In diagnostic radiation there are two types of uses, radiology which is an external use and nuclear medicine which is an internal use. [5] Since the discovery of x-rays, diagnostic radiology has developed from being a scientific experiment to becoming a part of modern medicine. [5] When radiology was first introduced into medicine, it was originally used to diagnose diseases, but over the years due to development of nonionizing technologies, new ways of imaging was introduced. [5] These include ultrasounds and magnetic resonance imaging. [5] Due to this new change, this brought a new term called medical imaging. [5]

In the medical field, therapeutic uses of radiation such as radiation oncology (radiation therapy) are used for treating cancer with ionising radiation. [5] The process is to kill the tumor cells that are developing and depending on the type of tumor, stage of the disease and where the tumor is located (organ or tissue), the dose may range from 30 to 70 gray (Gy). [5] The treatment can be delivered using an external beam of ionizing radiation such as gamma rays, photons or electrons. [5]

In 1924, Gustav Ising had proposed the idea of creating a linear accelerator and 4 years later in 1928, the first linear accelerator (linacs) was invented by Rolf Wideroe. [7] The first generation of linacs used for medical purposes had many limitations due to its design, it produced relatively low beam energy and radiation output. [7] However, over time the linac design changed to become safer and correspond to each of the different particles used for treatment; electrons, protons and ions. [7] Now the linac has become an important way to treat cancer in radiation therapy by generating x-rays and high energy electrons using electric power. [8] The linac uses collimators and filters which help to control the shape and intensity of the beam during treatment. [8] Hence, this can accurately target the cancer tissue while minimising the exposure to the surrounding normal tissues. [8]

Radiation therapy is always evolving to find new and better treatments for cancer. [7] Therefore, researchers have been thinking of new machines such as combining the linac and MRI or using laser-particle accelerators. [7] Although there are many ideas, these machines must be tested to understand if it has any benefits and the cost it brings to integrate them into clinical settings. [7] However, there will likely be further advancements made, such as beam shaping which can improve resolution and flexibility, more use of computer control and use of robotics in radiography. [7]

An X-ray is a quick, painless test that produces images of the structures inside the body. X-ray beams pass through the body, and they are absorbed in different amounts depending on the density of the material they pass through. 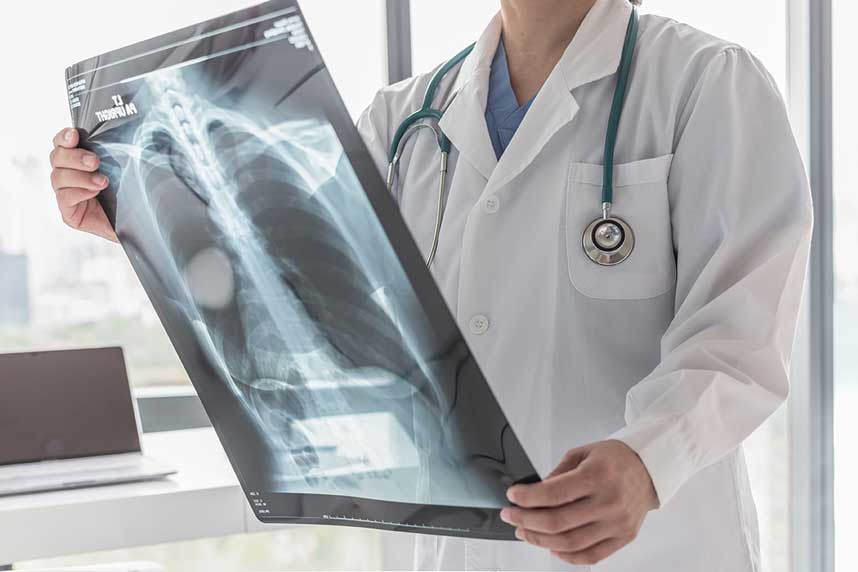 Chapter 1 Introduction The production of radiographic films involves the same methods as photographic film processing. In radiography, x-rays rather than visible light create a latent image on the fil...

Use of X-Radiation for Diagnostic and Therpeutic Purposes

Compare and contrast the use of X-radiation for diagnostic and therapeutic purposes. Introduction Radiation is energy that comes as a form of either a wave or as energised particles. In a radiation sp...