Like the Gibbs and Rolfe models, Christopher Johns' work on reflective practice was originally developed in a nursing context, but has since become widely applied across a variety of disciplines, including education. Johns' approach to reflective practice has become influential, not least because it provokes a consideration in the individual of matters which are external to them as well as elements which are internal to the practitioner.

The Processes of Johns Model of Reflection

There are two sets of related processes in this model; looking in, then looking outwards.

First, the practitioner is asked to look inwards upon themselves and recall the experience being analysed. It may be useful to write notes to clarify one's memories. Write a descriptive account of the situation, paying attention to the emotions conjured up in the moment of the event being reflected upon, and those emotions and other thoughts which have been provoked since. Take note of issues arising from the event and its consequences.

The looking out element of the model is structured around five key sets of questions. The diagram below indicates the working of Johns' model: 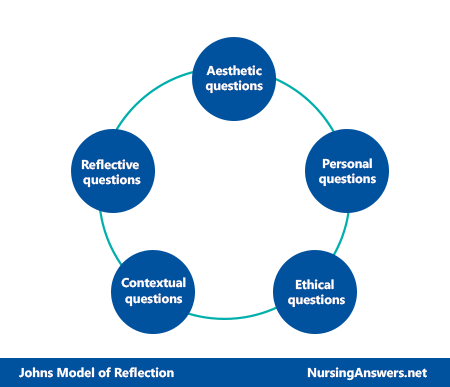 Aesthetics in the sense in which Johns is using it means questions raised in relation to one's sensory perceptions, rather than in the more common usage of referring to an appreciation of art and beauty (Oxford Dictionaries, 2016a). For Johns, aesthetic questions include:

Personal questions relate to self-examination, and ask if you can identify the nature of your actions and reactions, and the elements which influenced or provoked those. Relevant questions to ask here include:

Ethical questions in this model relate to the coherence of your actions when compared to your moral and professional codes. Was how you acted consistent with your sense of self, and the values which you usually embody? Relevant questions to ask may include:

The contextual element of the model asks you to consider if there were environmental or other factors acting on you from outside. Relevant questions to ask here include:

Some versions of Johns' model refer to this section as asking empirical questions; the word 'empirical' in this usage meaning being based on evidence, observation, and experimentation. The process of working through the reflective cycle has generated evidence based upon your observations, and that leads you to be able to make assessments. Relevant questions to ask here can include:

Johns' model is useful in that it encourages reflection taking into consideration a range of standpoints, and that the reflector is provoked to consider the impacts of their actions not only on other people, but on themselves in respect of their own values. However, the model may be of limited use in some contexts as it is focused on the analysis of specific individual events rather than on wider questions.

The approach may be of relevance to troubleshooting problematic sessions or encounters with learners that went wrong in some way, but the model assumes a context of good practice to contrast the behaviour being reflected upon. The model has a narrative aspect to it, timelining events and feelings towards those events, but there is the danger that if applied superficially, the model may only lead to obvious and descriptive findings.