Osseointegrated implants can be combined with the following

The mucoperiosteal flap should be designed to adequately expose the underlying residual ridge, maintain a broad base for vascular support, and allow tension-free primary closure. A midcrestal incision is usually preferred because it maximizes the vascularity to the margins of the mucoperiosteal flaps and minimizes ischemia created by the vasculature traversing dense keratinized tissue at the crest of the ridge. Labial vertical releasing incisions are made as needed to improve access. All grafts must be well adapted to the recipient site with no or minimal space between graft and residual bone. Hence, usually graft shaping and adaptation is unavoidable. The graft is positioned to its best adaptation to the underlying alveolus. A good fixation with titanium screws must be achieved to prevent graft movement. Any movement of the graft increases the chance of soft tissues ingrowth between the graft and the recipient site, and thus failure of the graft is likely. All voids or defects should be filled with particulate cancellous bone and marrow to provide good contour and eliminate dead space. A primary, tension-free closure must be achieved to prevent wound breakdown and graft exposure. A barrier membrane and filler graft may be used, if desired.

Small osseous defects at the alveolar crest can be inlaid with an autologous graft to restore the contour and volume of bone necessary to place the implant and allow for a proper emergence profile.

The defect is usually exposed through a crestal incision that is extended around the necks of one or two adjacent teeth on either side of the defect. A vertical releasing incision is made if necessary. A barrier membrane may be used to protect these areas during healing.

Indicated where both horizontal and vertical ridge augmentation[S1], this type of graft is also of considerable value. Autogenous bone stabilized with rigid fixation to restore anatomic height and width is an excellent solution to this problem. A saddle of bone is obtained from the anterior-inferior border of the mandible (ipsilateral site) and secured in position from the buccal or crestal aspect with 1.5mm titanium screws with a minimum of 2 screws to achieve stable graft fixation.

A veneer graft is preferred where there is only a horizontal bone defect of less than 4mm.

The design of onlay grafts can be segmental or arch in shape.

Both the height and width of an atrophic ridge can be achieved with onlay grafts. Indications include the following[S2]: inadequate residual alveolar ridge height and width to support a functional prosthesis, contour defects that compromise implant support, function, or aesthetics, and segmental alveolar bone loss.

tissue grafts, and surgical extension of the vestibulum) have been recommended in areas of movable

It has also been stated that cancellous grafts are more successful because of cortical plate (Buchman 1999 Cancelous Bone stucture.pdf, n.d.)

Group A analysis for correlation between the patients age and number of teeth missing outcome: 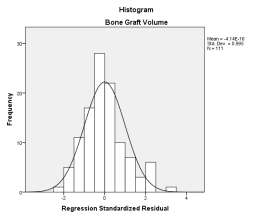 Number of teeth and harvested bone volumes distribution for Group A

Clinician A and B harvested bone volumes distributions:

To conclude, with an increase in age there were a higher number of teeth missing in both groups A and B. Although the diameter of bone reconstruction was greater because of more missing teeth, the harvested volumes were greater only in Group A harvested by clinician A (p<0.05). Moreover, there was a significant difference between clinicians A and B and their harvested bone graft volumes in Group A and B (p<0.05). Overall, the harvested bone volume from ascending mandibular ramus depends on the person who operates.

In addition to mandibular, ascending ramus bone can be harvested at intraoral sites and can be considered incrementally to the performed procedure, [S5]such as the contralateral ramus site, chin, and maxillary tuberosity, when greater bone volumes are required. Moreover, bone materials can be also added if the bone volume is not yet sufficient. And finally, based on the literature review findings, the majority of iliac crest bone graft can be successfully replaced with ascending ramus bone grafts as the studies revealed that the harvested bone grafts are not significantly greater.

The outcome of implant therapy has been summarized in several recent reviews (Cochran 1996, Esposito et al. 1998, Fritz 1996, Fiorellini et al. 1998, Gotfredsen 1999, Mericske-Stern 1999, Van Steenberge et al. 1999) and evaluations are often reported in success and survival rates. The interpretation of the results, however, relies on the concept that different investigators use similar criteria for implant success and survival. Variations in study design and study period, and an improper definition of the selection of patients are factors that may further affect the interpretation of the data.

First, autologous bone grafts of various types to different locations can be successfully used to improve the ability to place endosseous implants. Complications that lead to failure can be minimized with experience and adherence to the basic surgical principles of rigid fixation and tension-free primary closure of the soft tissue flaps. Second, most of the grafting failures are associated with infection or exposure of the graft to the oral cavity because of mucosal flap dehiscence. Early loading of grafts with a transitional prosthesis is also a potential cause of graft compromise or failure. Third, the successful placement of endosseous implants in autologous grafts is more predictable when they are placed secondarily after bone graft consolidation; and fourth, whether placed immediately with the bone graft, or secondarily, failure of individual implants does not imply failure of the bone graft.

Although COHRANE stated that autologous is not in favour, this statement needs to be considered very carefully because the outcome does not measure all aspects in conventional terms of success. As stated before, implant survival is no longer a single preferable outcome today. Cohrane agrees that there are few randomized controlled trials and for most that are conducted today a high risk of bias remains.

Furthermore, bone augmentation, such as synthetic bone materials, provide a poorer outcome than animal retrieved bone materials. However, because of cultural or religious reasons animal products may not be accepted for certain groups of patient and therefore autologous bone grafts remain a single option to augment alveolar crest defects.

Aesthetics and harmony in dental implant placement was well described by Belser et al. 1998. Buccal bone thickness should be a minimum of 2mm and ideally 3mm from the implant buccal surface.

[S1]Not sure about this. Does it relate to the heading i.e. ‘Saddle graft is Indicated where both horizontal and vertical ridge augmentation…’

[S5]Please check this one. I’ve read it many times and am a little confused ïŠ

Dentistry, also known as dental medicine and oral medicine, is a branch of medicine that consists of the study, diagnosis, prevention, and treatment of diseases, disorders, and conditions of the oral cavity.

A cross sectional study to assess the dental caries experience, Periodontal Status and oral mucosal lesions among patients with and without Anti-Retroviral Therapy (ART)....

Abstract Objectives: Many series of side effects will be produced with the extraction of impacted lower third molar which including pain, swelling, inflammation, and trismus. Flap design is important...