Levothyroxine sodium is a synthetic thyroxine (T4) hormone, and is the mainstay of treatment for hypothyroidism and the suppression of thyroid stimulating hormone (TSH) in patients with thyroid cancer or after thyroidectomy.1 Two main properties of levothyroxine have contributed to a turbulent regulatory history. First, levothyroxine targets a narrow therapeutic range of T4 hormone and requires careful titration to a safe and effective dose.2 Second, levothyroxine is relatively unstable and its degradation is accelerated in response to environmental factors and in the presence of some inert product ingredients.3,4 Between 1991 and 1997 there were at least 10 recalls of different levothyroxine products mostly due to sub-potency or uncertain potency, comprising 150 lots and 100 million tablets.5

Although major regulatory changes were implemented to improve the quality and safety of levothyroxine products in 1997 and again in 2007,5-7 concerns persist about bioequivalence and variation in product potency.8 In a previous study of generic drug use from a nationally representative sample of commercial claims data in late 2013, we found that generic utilization of thyroid agents, mostly comprising levothyroxine, was 61%,9 despite the availability of generic preparations for >10 years. This utilization rate is markedly low given that overall generic uptake is approaching 90% in U.S.10

To encourage use of generic levothyroxine, more information is needed about the healthcare provider and patient barriers to uptake of generic preparations. We used a large electronic health records (EHR) database from a healthcare delivery system to evaluate measurable determinants of, and unexplained variation in, outpatient generic prescribing of levothyroxine. We hypothesized that both patient and provider factors contribute to generic levothyroxine prescribing and that residual variation in providers’ generic prescribing would persist after accounting for measurable factors.

Race and ethnicity were captured by self-report during routine clinical practice in accordance with U.S. Census standards.13 We identified TSH laboratory results for each patient in the 12 months prior to the index prescription. In the case of multiple measurements, we chose the one closest to (but not after) the date that the index prescription was ordered. We also extracted information on other patient characteristics, including use of concomitant medications, insurance type, and clinical diagnoses. Insurance type was categorized as fee-for-service or preferred provider organization (FFS/PPO), health maintenance organization (HMO; including Medicare Advantage), Medicare, Medicaid, and unknown (including self-pay). For each patient, we calculated a Charlson Comorbidity Index (CCI) score based International Classification of Disease-9 encounter and problem-list diagnoses documented in the 12 months prior to the index prescription.14 We used 2010 U.S. Census block information to determine the median householdincome of the Census track in which patients reside as a proxy for socioeconomic status.

We used mixed-effects multivariable logistic regression models to assess the relationship between generic prescribing of levothyroxine (dependent variable) and patient and prescription factors (level-1 predictor variables), and healthcare provider factors (level-2 predictor variables) (see Table 1). We assumed that patients with prescriptions from the same healthcare provider were more alike in their propensity to receive a generic than patients from different providers. Accordingly, we included random-effects (i.e., random intercepts) in our models for each prescribing healthcare provider of the index levothyroxine prescription (N=941). To quantify between-cluster variation, we calculated the intra-class correlation coefficient (ICC) in the absence of covariates (variance-components model) and in the presence of patient, prescription, and provider fixed-effect covariates (mixed-effects multivariable models). These models were also fitted separately by provider type (PCP and endocrinologist). Odds ratios (OR) and 95% confidence intervals (CIs) were calculated for fixed-effect covariates.

We derived predicted probabilities of receiving generic levothyroxine for each fixed-effect covariate from post-hoc estimation of adjusted means, holding all other variables constant.15 We included interaction terms in the mixed-effects multivariable model to examine effect modification by provider type for patient age, sex, race/ethnicity. When interactions were present, we calculated predicted probabilities of receiving generic levothyroxine for the covariate of interest stratified by provider type. Due to multiple comparisons within models, a P-value <0.01 was considered statistically significant to mitigate a type-1 statistical error.

A lower prescribing rate of generic levothyroxine among endocrinologists was not unexpected. In 2004, when the FDA first approved generic levothyroxine products and rated them as bioequivalent with branded reference listed drugs, the American Association for Clinical Endocrinologists (AACE), the Endocrine Society (ES), and the American Thyroid Association (ATA) challenged this decision.16 Chiefly, they were concerned with the methods used to establish bioequivalence and that allowable differences in between-lot product potency could have clinically significant implications for this narrow therapeutic index drug, particularly when switching between products of different manufacturers.16,17 While the FDA defended the bioequivalence methodology, in 2007 the agency announced that it would narrow the required assay range specifications of levothyroxine from 90%-110% to 95%-105% to address potential inconsistencies in between-lot potency.6,7 Nevertheless, the AACE, ES, and ATA, still caution against switching between products.18-20

The bioequivalence of generic and branded levothyroxine debate is ongoing. A recent cross-over randomized study of 31 children with congenital hypothyroidism in 2013 showed that generic levothyroxine is not bioequivalent to brand levothyroxine.21 Conversely, a retrospective study of 27 children with congenital hypothyroidism published at the same time showed similar or better control of TSH variance with generic versus branded levothyroxine.22 These studies reached contradictory conclusions; however, comparisons of these studies are complicated by different study designs and distinct approaches to testing bioequivalence.

In a study of 36,832 older adults (â‰¥65 years) in the U.S. initiating narrow therapeutic index drugs, of which warfarin (48%) and levothyroxine (29%) were the most prevalent, predictors of higher generic drug initiation, included older age, male sex, higher comorbidity, lower Census block median household income, and prior generic utilization. These findings from a Medicare population are overall consistent with our results.23 In our study, bivariate analyses showed that HMO and Medicare beneficiaries were more likely to receive generic levothyroxine; however, this association was mitigated in the presence of other factors in multivariable analyses.

We found that provider type was an effect modifier for the relationship between patient sex and generic prescribing of levothyroxine in multivariable models. In stratified analyses, while the predicted probability of receiving generic levothyroxine from a PCP was similar among women and men (81%, each), the probability of receiving a generic from an endocrinologist was disproportionately lower for women (63% vs. 71% for men). Because lower prescribing of generic levothyroxine was observed for endocrinologists but not PCPs, this occurrence is likely driven by provider rather than patient preferences. Future studies are warranted to understand these prescribing practices among endocrinologists.

The results of this study should be interpreted in the context of several limitations. The retrospective, observational nature of this study prevents causal inferences. Furthermore, rates of generic prescribing of levothyroxine may overestimate generic utilization of this drug, as some patients may not consent to generic substitution at the pharmacy. Although California has a permissive generic substitution law, patients can still refuse a substitution. In the absence of pharmacy claims, we cannot know whether a generic or branded product was actually dispensed. Nevertheless, in a previous study we showed that our algorithm used to determine brand versus generic prescribing measured by EHR data performs well in predicting actual dispensing patterns.12 Thestudy setting is a healthcare delivery system in Northern California, and we cannot know if our findings are generalizable to other parts of the U.S.; however, the organization is a mixed-payer system, and operates much like other provider-based delivery systems in the nation, without a single drug formulary. As such, we are confident that our findings are relevant to other similar health systems in the U.S.

This study has several strengths. We used a relative large cohort of patients from a mixed-payer healthcare delivery system over a four-year period to examine patterns in and determinants of generic prescribing of levothyroxine. We leveraged extensive information from the health system’s EHR database, including disease and medication history, TSH levels, and providers’ levothyroxine prescribing and patient volume. To our knowledge, this is the first study to quantify variation in generic prescribing of levothyroxine between healthcare providers.

The presence of residual variation between providers in generic prescribing of levothyroxine, after controlling for important measurable confounders, indicates potential unwarranted variation due to prescribing preferences. Such variation, which may also be influenced by patient beliefs and preferences, can be the target of provider interventions or patient education aimed at improving levothyroxine generic uptake.

The thyroid gland is an endocrine gland in your neck. It makes two hormones that are secreted into the blood: thyroxine (T4) and triiodothyronine (T3). These hormones are necessary for all the cells in your body to work normally. Thyroid disorders are very common with one in 20 people having some kind of thyroid disorder. 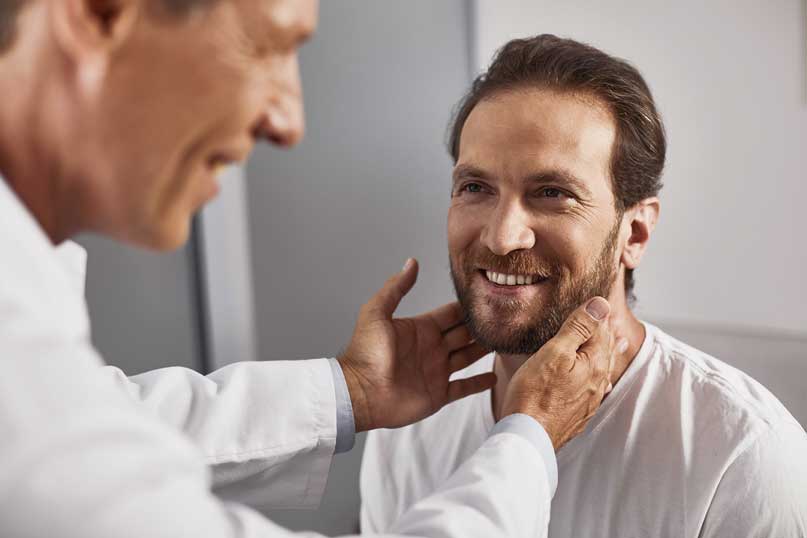 A Systematic Review of Thyroid Cancer After the Chernobyl Accident

ABSTRACT Background: Following the immediate fallout of the Chernobyl nuclear accident, many epidemiologic studies were conducted to ascertain the effects of ionizing radiation on cancer incidence and...

Hyperthyroidism is a disorder that falls under the category of endocrine disorders. The thyroid gland is overactive and produces more thyroid hormones than the body needs. As a result, ther...