Disclaimer: This work has been submitted by a student. This is not an example of the work produced by our Nursing Essay Writing Service. You can view samples of our professional work here.

“Discuss the prevalence and spread of TB in the UK today. Include epidemiology,

‘Tuberculosis figures fall by a third in six years’ (BBC 2018)

Recent headlines testify to a on a downward TB trend nationwide  (ECDC 2019), reaching the lowest ever recorded rates in 2017 (TB Alert 2019). Behind the headlines, the fact remains that despite this reduction in incidence, the UK has one of the highest rates in Western Europe with 8.9 people affected per 100,000 (ECDC 2019). This essay will explore the reasons behind this as well as the strategies being employed to reach the WHO target of elimination of TB as a worldwide public health issue by 2035 (WHO 2018).

In 2011, TB figures in the UK reached a post-war peak (TB Alert 2019) with 15 people affected per 100,000. Within the UK, England has the highest rates and Wales the lowest (Public Health Wales 2018). [1] Whilst the current figures appear to show the successful implementation of strategies to curb that rise, they reveal a stark epidemiological disparity.  As shown in figure 1, those that experience the greatest level of social deprivation are far more likely to suffer from the disease than those that experience the least – the bottom 10% are 7 times more vulnerable that the top 10% (PHE 2017). 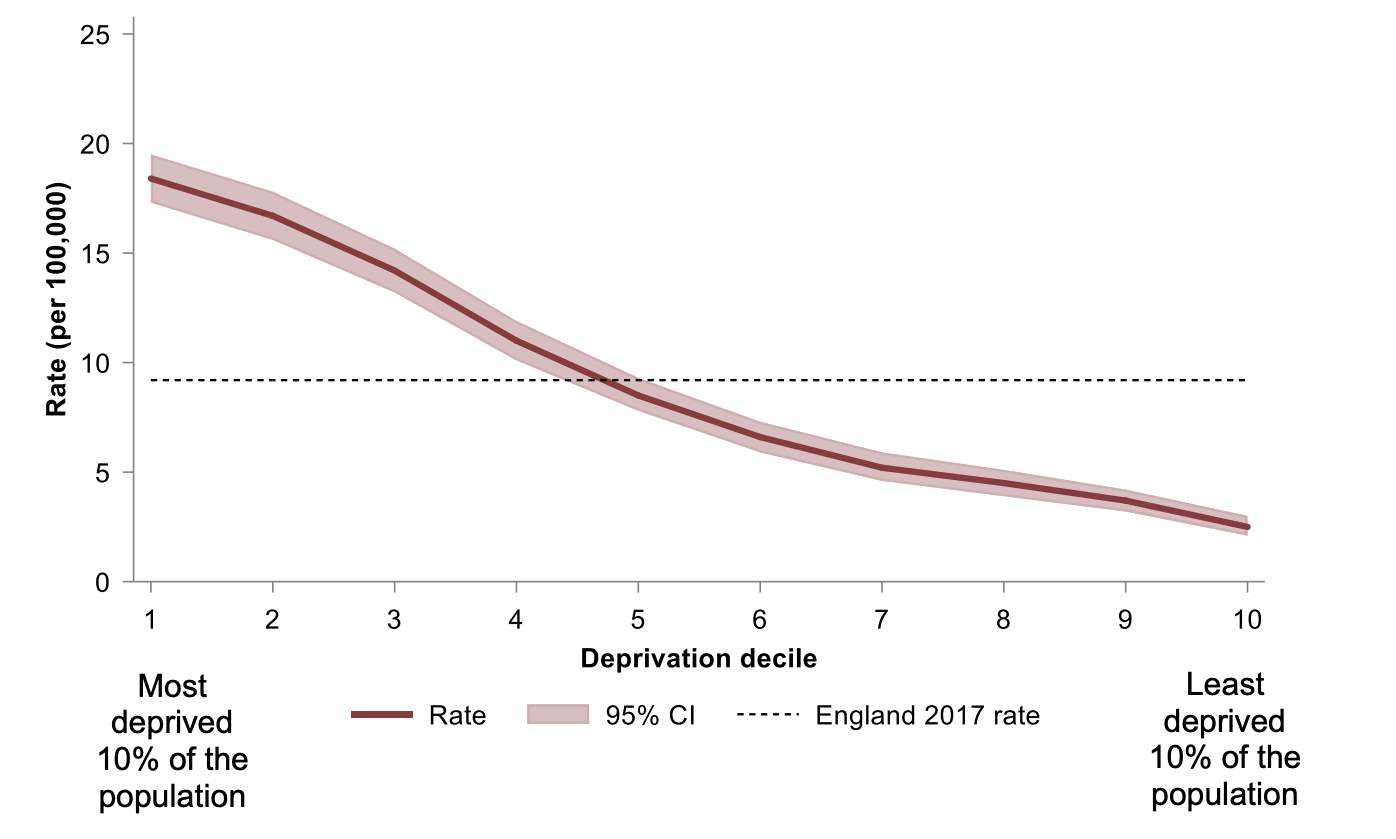 In understanding the epidemiology of TB, it is vital therefore that we also consider the social determinants that contribute to TB’s prevalence and spread and the challenges they present to treatment and efforts to eliminate the disease.

The perception of TB has changed much over the past two centuries. At the end of the nineteenth century, its victims were romantically depicted as suffering from a wasting disease marked by ‘a refinement of the body, heightened artistic sensibilities, and ennoblement of the soul’ (Tabrah 2011). When the scientist Koch isolated the tubercule bacillus, he proved that TB was in fact an infectious disease rather than a consumptive and romantic infliction (Barberis et al 2017). However, as the 2017 Public Health England report (PHE 2017) highlights, factors of socio-economic inequality including unemployment, homelessness, levels of poverty and access to healthcare provision are crucial factors to understanding the disease as it presents in the UK today. Figure 2 highlights identified social risk factors linked to increasedTB incidence. 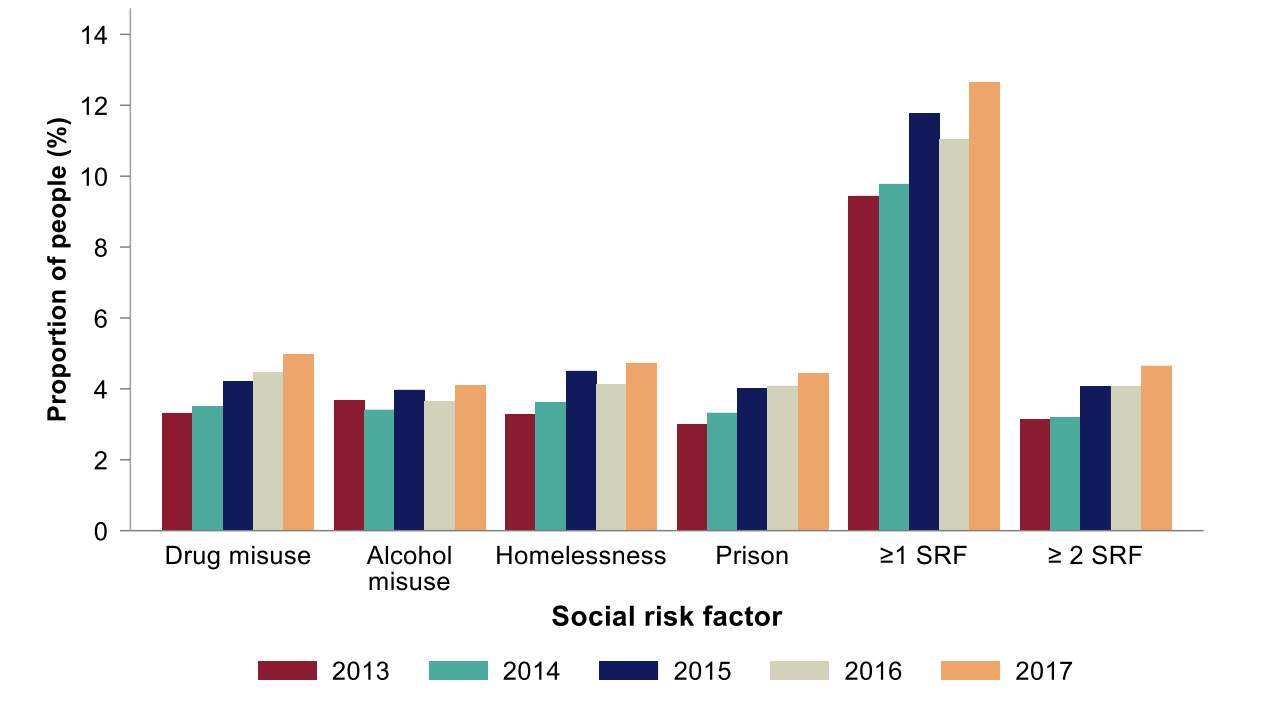 As Koch discovered, tuberculosis is caused by infection with Mycobacterium tuberculosis after inhalation of an infected droplet from an infected person. It is also possible to contract TB from unpasteurised milk infected with M. bovis, a related organism. In the UK, since most milk is pasteurised, the respiratory route is the primary mode of infection (Smith 2003). It is important to note that development of the disease is determined by the host’s immune response. Only 5% – 10% of those infected will go on to develop active disease within their lifetime (WHO 2018). Both intrinsic and extrinsic factors are involved – crucially the physiological and nutritional state of the person as well as the current state of immune system (Smith 2003). Children, advanced HIV sufferers and people with other immunocompromising conditions are the most vulnerable *(Menzies et al 2018). Given the prevalence of the disease amongst the most deprived including those with risk factors, it is clear that TB is not just a public health issue but a social concern.

Upon infection, M. Tuberculosis enters the alveoli and forms granuloma in the lungs. These granuloma then join to form primary lesions, known as pulmonary TB. The bacterial organisms can subsequently spread, either lymphatically or haematogenously, to other organs in the body resulting in extrapulmonary TB. Latent TB infection (LBTI) is the result of the primary lesion being contained within a fibrous capsule (Walker et al 2013). It is asymptomatic and cannot be transmitted though may be reactivated (Menzies et al 2018).  One author states that it is the reactivation of latent TB that causes most adult cases of TB in non-HIV infected people (Smith 2003). A more recent paper challenges this argument, showing that in fact it is only in country with a low TB burden – such as the UK – that this holds true (Behr et al 2018).

Public Health England states that those people born outside of the UK accounted for 71% of reported TB cases (PHE 2017). This may be attributable to both higher TB burden in the country of origin as well as:

‘a wider ‘hostile environment’ [which] includes mechanisms that restrict access to healthcare and housing for migrant populations, which heightens the exposure rate of TB to those already most at-risk of TB.’                            (Race Equality Foundation 2018)

Attempts to control TB levels include pre-entry screening and latent TB testing for all new migrants between the ages of 16-35 from countries with a high incidence of TB (PHE 2017). Screening is also advised by NICE guidelines for those in close contact with TB patients, healthcare workers and immunosuppressed patients such as those with HIV (NICE 2016). Latent TB screening is done either by a tuberculin skin test or  interferon-y assays (IGRA) which are cell mediated blood tests. though poor sensitivity linked to the skin test including from previous TB vaccines suggest combined use or IGRA use alone (Abubakar 2012). The screening for LBTI means early diagnosis and chemoprophylactic treatment and is seen as ‘the cornerstone of TB control in high-income low incidence countries’ (Abubakar n.d.).

As discussed, many of high risk groups within the UK – such as prisoners, the homeless and substance abusers are the hardest to reach. This means that diagnosis and treatment is also challenging (Abubakar 2012).The Find and Reach service in London recognises that the people that it works with often escape early TB detection as symptoms are masked by lifestyle and furthermore they cannot easily access diagnostic services. They offer both latent and active testing. The latter is done by chest radiographs within a mobile unit (UCLH n.d) and can also be detected using sputum smears and culture (Abubakar 2012).

Completion of the six month daily antibiotic treatment regime required for active TB can be challenging. Latent TB patients may also be prescribed antibiotics unless suspected of drug resistance. Both treatment regimes can involve side effects such as peripheral neuropathy and liver damage (NHS 2019). Consequently, patients working with the outreach team have higher transmission rates, greater risk of developing mutliple drug resistant TB (MDR-TB) and relapsing, compounded by poor, unsanitary or no housing (Story et al 2007). Solutions such as directly observed treatment (DOT) are used (UCLH n.d.). There is some discussion over the success of DOT leading to the development and recent trial of Video Observed Treatment (VOT). By giving patients free smartphones and training them to video themselves ingesting their treatment doses, the study showed both a higher uptake rate as well as a greater success rate than DOT. The study also concluded that the technology offered cost savings due to decreased staff time even with the cost of phones taken into account (Story et al 2019).

As indicated, failure to complete treatment increases the risk of developing multiple drug resistance. Whilst overall rates of TB have fallen according to 2017 figures, Public Health England notes that the rates for drug resistant TB have not.  Within groups with social risk factors the likelihood of developing MDR TB was almost twice as high (PHE 2017). This once more highlights the importance in addressing those most at risk and the value of work being done by research teams to find new ways to both engage and treat them.

Recent drug trials have also explored shorter treatments of alternative antibiotics to reduce harmful side-effects (Menzies et al 2018). In terms of MDR TB, research shows how genome sequencing can identify mutations  indicative of drug resistance and therefore inform further treatment (Brown 2015). One area that has seen little change is the development of TB vaccines. The only vaccine currently licensed, bacillus Calmette–Guérin (BCG) was introduced over a century ago. Efficacy of the vaccine varies depending on location but it is poorly understood. Genetic variability in the strains used alongside hypotheses relating to pre-sensitisation by environmental mycobacteria and variability in vaccine batches are amongst explanations given (Davenne and McShane 2017). Evidence shows that neo-natal BCG offers good protection against extra-pulmonary and pulmonary TB in young children but offers variable efficacy against pulmonary TB in adults (Dockrell and Smith 2018). The significant heterogeneity seen means that currently it does not offer guaranteed protection against the disease and is therefore limited in its use and reliability. Development of further vaccines is hampered by incomplete understanding of the BCG vaccine’s efficacy (Davenne and McShane 2017).

In concluding this essay, I would like to return to the shocking statistics that frame the UK’s TB figures – that the most deprived are most affected by the disease. There is no way that we can address TB without also putting due attention on the social determinants behind its prevalence in this country. The UK is ranked as the fifth most unequal country in Europe in terms of income distribution (Partington 2018). Homelessness has risen dramatically in the last 20 years – 165% between 2010 and 2018 (Homeless link 2018).  Prison numbers remain high (Houses of Parliament 2018). Figures for class A drug use in the young are on the increase (Home Office 2018). The use of food banks have similarly increased (Trussel Trust 2018). Overall poverty in the UK is on the increase (Fullfact 2018) 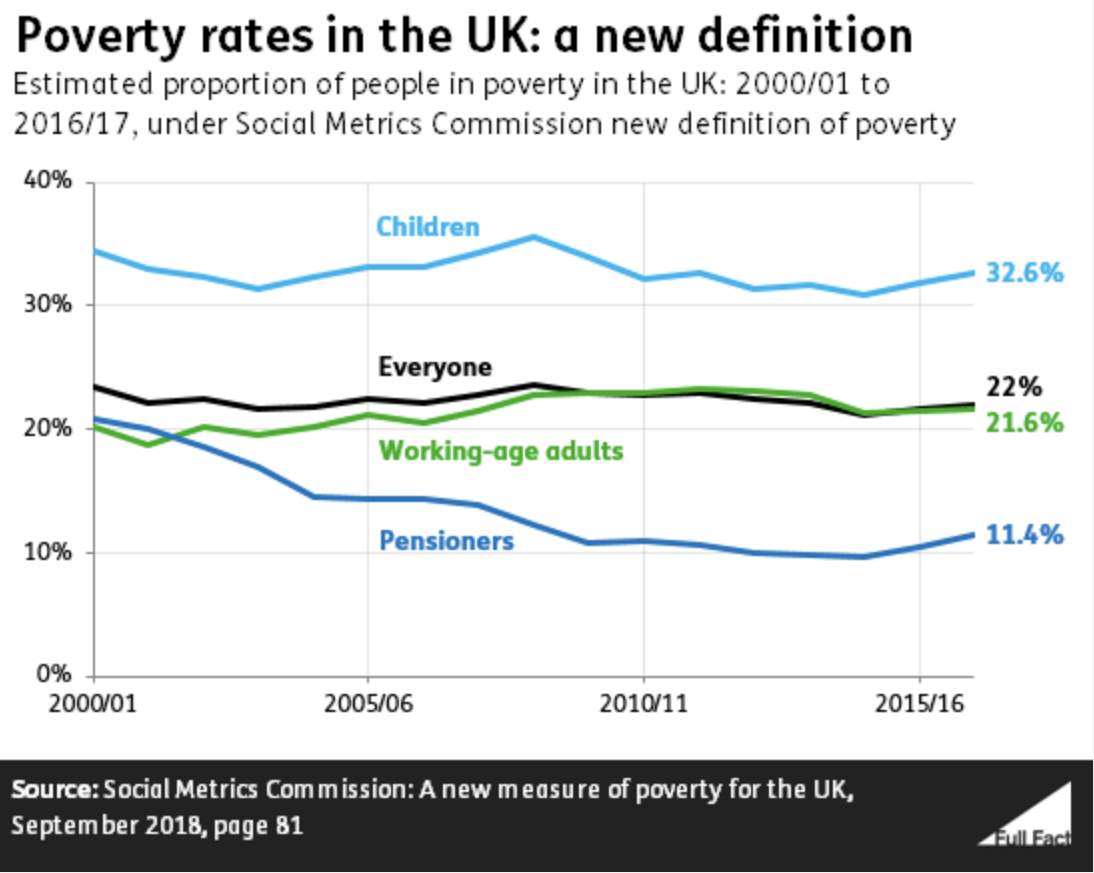 As the Public Health England report states, there is no room for complacency in the downward trend in TB figures. TB is a disease associated with poverty (Oxlade and Murray 2012). Furthermore the stigma that it receives means that diagnosis and detection may be complicated. As we see, the current conditions in the UK increase the numbers of people within the most at risk groups as well as overall nationwide trends in poverty – all of which give rise to conditions that favour future TB spread and cause for present concern.

[1] Figures for TB are collected by regional Public Health Boards (England, Scotland and Wales. Thiis essay will refer to regional figures where relevant.