The liver is a very significant organ in the human body that performs a series of complex operations. Mostly located in the upper—right quadrant of the abdomen, the liver holds the ability to execute five-hundred individual functions[1].

The liver carries up to 10% of a human being’s blood volume at any given time, bringing the average adult liver to a weight of around 1.4kgs1-[2].

The liver is customary for detoxifying drugs, alcohol, and other harmful matter from the gut1. Nutrient-rich blood cells are transported from the heart and intestine to the liver to deliver carbohydrates, fats and vitamins that help the liver to produce blood plasma proteins, cholesterol and vitamin D that are essential for daily bodily function2. Any old or spent blood cells are eliminated by the liver in order to produce bile salts and store vitamin A1.

With the liver playing such an important role in the daily maintenance of the human body, it is crucial that we find out how to preserve it in order to live a healthy life.

Breakdown of The Hepatic Lobule

The liver is made up of four lobes.

The right lobe, left lobe, Quadrate lobe, and the Caudate lobe[4]. These sectors are made up of thousands of   small lobules that are key in the liver’s operation.

Hepatic lobules are made up from hepatocyte cells, endothelial cells, Kupffer cells, (known as resident macrophages of the liver) and Hepatic Stellate Cells (HSCs)[5].­

CLD is caused when repeated damage to the liver strikes the inflammation process of the immune system. When damage, most commonly through toxin abuse (e.g. alcohol or drugs), excessive fat intake (steatohepatitis) or viral hepatitis, is taken out constantly over a prolonged period of time, the liver’s regeneration capabilities become inefficient, leaving signs of fibrosis – a deposition of scar tissue in place of a dead hepatocyte[6].

The latest stage of CLD is called cirrhosis, this is the process in which fibrosis is too widespread to revert, increasing the chances of tumours and/or hepatic cancer.

When damage is discovered in the liver, the human body establishes a localised defensive response called inflammation6. Inflammation can be identified when a damaged area begins to swell and rise in temperature, as well as releasing cellular fluid in order to kill heat sensitive bacteria or viruses[7]–[8].

Inflammation is also characterised by symptoms such as; reddening and/or loss of function of the affected area8.

Inflammation holds a vital role in the resolution of CLD as it is an early sign of fibrosis. Chronic liver damage can be easily identified through biopsies as liver tissue may show several signs of this process, helping doctors to assist in the recovery process of CLD patients during the early stages. (Figure 1)

Figure 1: Cellular changes among chronic liver inflammation – The following diagram of the liver lobule presents the activation of resident Kupffer cells as a result of hepatocyte damage, releasing factors that send quiescent HSCs into an activated state in order to release vitamin A and provoke fibrotic tissue production. The presence of fibrotic tissue leads to loss of endothelial fenestrae, and microvilli in hepatocytes. This change in cell structure may induce loss of organ function.

Current chronic liver damage treatment consists of supportive care and Orthotopic Liver Transplantations (OLTs)[9]. However, only 78% of CLD patients received these transplants within two years of listing in 2016[10]. This combined with the risk of organ rejection shows that finding a more ideal therapy is crucial for the survival of CLD patients.

Haematopoietic immune cells of the body called macrophages are a key component in the resolution of liver damage (Figure 2).

Infiltrating macrophages are derived by circulating monocytes and hold the function to change their cellular properties according to their exposed environment[11]–[12]. Their role is to migrate to the affected area, phagocytose (eat and decompose) any dead cells and bacteria within an organ, and secrete (reproduce and discharge) cytokines and growth factors which assist hepatocyte proliferation.

Resident macrophages of the liver- also known as Kuppfer cells– are relatively immobile compared to infiltrating macrophages[13]. They phagocytose microorganisms, cellular debris and other harmful bacteria that may translocate from 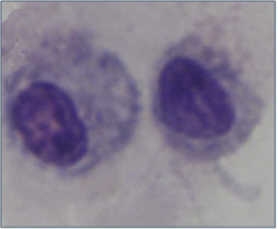 the blood and gut to the liver where they may cause sepsis13-14.

Cellular Communication in the Resolution of Liver Injury

Once infiltrating macrophages phagocytose dead tissue, it is digested into tiny pieces and translocated on molecules to the macrophage surface where they can be recognised by lymphocytes such as B and T cells[14].

T cells assist infiltrating macrophages to kill antigens, whereas B cells help to produce antibodies in order to neutralise them14-[15].

For the liver lobule to return to a healthy condition, activated HSCs must either encounter cell death or revert to a quiescent state as hepatocytes proliferate to substitute for the dead cell(s). 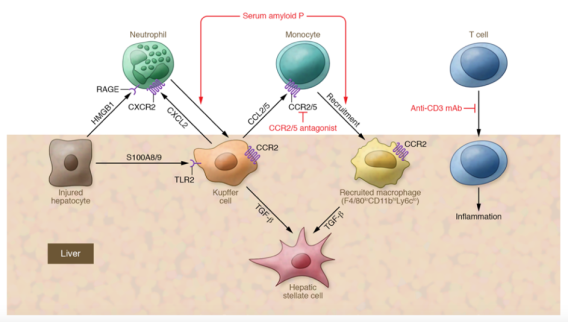 If macrophages were alone in the resolution process, not much would get done. It is the communication between cells that make the process possible.

Figure 3: Cellular communication in the resolution of liver injury

Monocytes, B & T cells, Hepatocytes, and HSCs all communicate well with macrophages in order for them to do their job and execute the repair of damaged tissue. (Figure 3)

Implanting more of these extremely intellectual cells into a chronically damaged liver could possibly speed up the resolution process and aid reversal of liver damage, leaving the implantation of infiltrating macrophages as a viable cell therapy for CLD[16]–[17].

Therapeutic Implantations for the Resolution of Liver Injury

Current research into viable cell therapies for chronic liver damage is based on autologous/allogeneic cell transplantation or bioartificial support systems to reverse damage or to be used while a patient is waiting for an OLT[18].

The implantation of bioartificial hepatocytes may show promising results as; it is easier for macrophages to focus on regenerating other dead cells, speeding up the resolution process.

Although this therapy may sound promising, it does hold several downsides too such as; Hepatocytes lacking the ability to migrate to the damaged area, leaving a high margin for human error and a high demand for expensive biomaterials, and hepatocytes losing the ability to proliferate after alteration and shortly after encountering cell death[20].

Organoids are developed through the allogeneic biopsy of a healthy liver lobule. Stem cells are extracted via the bile ducts of the lobule where they are grown using the organoid culture method[21]. The organoid is then injected into the hepatic bloodstream where its progenitor-like properties induce hepatocyte growth and reduce liver damage21-[22]. Although hepatic organoids have shown very promising results on rodent models, slow production speed limits this procedure to rodent models for the time being, and due to this new procedure being rather invasive, can only be performed once within a human’s lifespan22-[23]. (For more information on the pros and cons of organoid technology, seeTable 1)

Several scientists at the University of Edinburgh executed murine experiments in order to investigate the possible use of Human Monocyte-Derived Macrophages (HMDMs) as cell therapy for alcoholic/drug-induced liver cirrhosis[24].

Human monocytes from a healthy donor were isolated and matured into macrophages over a seven-day period using a Good Manufacturing Practice-compatible technique and were signalled as fully developed macrophages once there was an absence of monocyte markers and a presence of macrophage markers[25]. HMDMs were then infused in mice models of toxin- induced liver fibrosis24.

Results of the experiment show markers of a significant increase in liver regeneration from fibrosis measured with Sirius red staining of the collagen25.

These findings demonstrate why we should expand this experiment to human test subjects to ascertain whether or not the implanting of HMDMs would make a functioning alternative to the current therapies on offer.