Is blocking with Articaine better than Lidocaine?

Local anaesthetics (LAs) have an indispensable role in dentistry, providing the backbone of pain management. The primary purpose of these drugs being to achieve patient cooperation by providing a painless experience. In 1949, Lidocaine revolutionized the LA market as the first amide-type agent, developing the reputation as the “gold standard” for LAs in dentistry.[1]In 1976, articaine was introduced to the market as a new, distinct amide-type LA due to the presence of a thioprine ring, in place of a benzene ring. This unique molecular structure is considered to give articaine a greater lipid solubility, thus increasing the probability of the agent diffusing across the neuron’s lipid-rich membrane.[2]Further contributing to articaine’s uniqueness, it is the only amide-type LA to consist of an ester group which facilitates hydrolysation by plasma esterases. Therefore, immediately once articaine is administered there is rapid metabolism of the agent, which is considered to reduce systemic toxicity and allow use in a higher concentration compared to other LAs.[3]

Since articaine’s introduction to the market, it has captured dentist’s attention globally with increasing markets across North America and Europe, such as in Germany where the agent displays a 97% share of the market, nevertheless lidocaine remains the UK’s most commonly used LA.[4] [5] It is believed that articaine’s growth in popularity is as a result of its superior efficacy. In 2011, a randomised double-blind crossover trial compared the efficacy of infiltrations using lidocaine 2% and articaine 4%; reporting that the latter exhibited significantly superior pulpal anaesthesia.[6] Moreover, further studies have also suggested that there is no difference in the analgesic efficacy of these two agents when used as inferior alveolar nerve blocks (IANBs).[7] 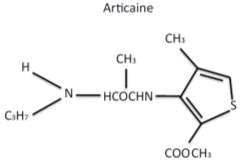 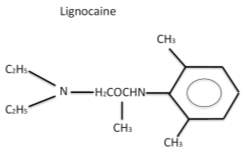 Typically, dental blocking is performed with relative ease, success and in the absence of complications. However, complications do occur with the most infamous being paraesthesia following an IANB. Paraesthesia can be defined as ‘unusual abnormal, but not painful, spontaneous or evoked sensations, and burning sensation’. [8] Due to the incidence of paraesthesia associated to IANBs ranging from 1 in 14,330, to 1 in 4,156,848, [9] [10] the infrequency of cases renders it difficult to elucidate the aetiology of the nerve damage.

-          Direct trauma from needle to the inferior alveolar or lingual nerve

-          Compression from epineural or perineural haemorrhage

The controversy concerning articaine’s safety was initially ignited with an early study indicating a greater incidence of paraesthesia and neurotoxicity compared to other LA agents.[11] Despite expert advice continuing to reinforce the need for caution when using articaine for dental blocking, research has struggled to provide convincing evidence to support these claims. This review aims to analyse current literature on articaine’s use for dental blocking and its potential neurotoxic effects.

Voluntary reports of paraesthesia to the Yellow Card Scheme, a regulatory system used for recording adverse incidences, were examined in the period of 1998 to 2008. [12] The reports included 44 cases of sensory disturbances related to dentistry, however the reports failed to detail the dental treatment performed and the duration of the disturbance. Articaine showed to be associated to 77.3% of the cases, whereas lidocaine was involved with 15.9% of the cases. The authors noted that almost 70% of the LA sales involved lidocaine and 13% involved articaine.

Between 1997 and 2004, 52 patients with IANB related nerve injuries were examined.[13] The study presented that although articaine was introduced to the market in 2000, the agent was responsible for 54% of the total cases. The authors were concerned that during the years of 2001 and 2002, articaine produced over a 20-fold higher incidence of nerve injury than other agents when administrated as an IANB. However, it could be argued that the results exhibit an epidemiologic phenomenon known as the Weber effect, which observes an increased number of reported adverse reactions shortly after a new drug is marketed.[14]

In a further study, a total of 241 adverse incident reports were analysed during the period of 2001 to 2007, with 75.1% of the reports being categorized as reports of paraesthesia.[15] Articaine was responsible for 70.6% of these reports, while being accountable for 41% of the market share. Within a subgroup, 10 out of 11 patients with damage to two trigeminal branches were also associated to articaine use, leading to the authors to suggest that needle injury to multiple nerve branches was highly unlikely, but rather the agent’s higher concentration and neurotoxicity.

Another retrospective study of non-surgical paraesthesia reports from the PLP between 1998 and 2008 observed comparable results. [17] During the period of 2006 to 2008, 64 cases of paraesthesia were reported with 70% being associated to the administration of articaine, while only being responsible for 44% of the market distribution. The authors suggested that the higher concentration agents of 4%, articaine and prilocaine, possessed an increased neurotoxicity due to their significantly increased incidence of paraesthesia reports.

Articaine was approved by the Food and Drug Administration and introduced to the American market in 2003, as a result of an influential “three identical single-dosed, randomized, double blind, parallel group, active-control, multicentre” study.[18] This investigation compared the safety and efficacy of articaine and lidocaine through examining 1,325 patients after administrating the respective agents. There were no significant differences in the incidence of adverse events between the articaine and lidocaine groups, moreover both groups had the identical incidence of paraesthesia events of 1%. However, the data was predominantly extracted by follow up telephone conversations, opening the possibility to reporting bias.

During the period from 2003 to 2005, 57 patients were referred to the University of California’s Department of Oral and Maxillofacial surgery due to nerve injury related to IANBs. [19]  Articaine was accountable for 29.8% of these cases while acquiring 25% of the market distribution. The same author developed his research to the period from 2006 to 2011, consisting of a further 41 referral cases.[20] The author’s findings were consistent with the previous study, as articaine was responsible for 33% of the cases and acquired a market distribution of 38%.

Furthermore, a retrospective study explored paraesthesia reports to FDA Adverse Event Reporting System between 1997 and 2008. [21] The database was filtered to 226 cases, representing paraesthesia caused by administration of an agent and non-surgical dentistry. Articaine was responsible for 51.3% of these cases, while having a market distribution of 14%. Even though articaine was introduced to the market 3 years after the start of the data-collection period, it was the most reported throughout the whole period. When the study period is limited from 2000 to 2008, articaine was responsible for 84% of these cases and contributed 19% of the market distribution.

A more recent study also obtained data from the FDA Adverse Event Reporting System between 2004 and 2011 to investigate alert signals of paraesthesia. [22] The authors accumulated 528 reports of “paraesthesia and dysesthesias” and a further 82 reports of “oral paraesthesia” associated with the administration of local anaesthetics. A disproportionality analysis was performed by calculating each agent’s reporting odds ratio (ROR), which represents the ratio of the paraesthesia cases and the total remaining adverse reactions reported. Articaine displayed the greatest ROR, indicating a greater likelihood of paraesthesia after administration. However, it could be argued that the study did not appreciate articaine’s lower systemic toxicity, thus meaning an increased the proportion of paraesthesia reports.[23]

Animal and in vitro studies

To investigate the neurotoxicity of LA agents, animal and in vitro studies have also been conducted. An early animal study investigated changes of nerves after intraneural injections of LA in Wistar rats and cats. The results displayed no toxic lesion in the animal nerves which had been directly injected with articaine, however the author suggested that sensory disturbances may be a result from intraneural haematomas. [24] Despite this, it can be argued that likelihood of injecting directly into the nerves whilst performing an IANB is extremely rare and that needle trauma would be a more probable cause of injury.

In another study, tissue reactions induced by differing anaesthetics were analysed by implanting paper cones soaked in anaesthetic into the subcutaneous region of rats. Articaine appeared to have an inflammatory reaction of greater intensity than lidocaine, however the authors suggested that the presence of vasoconstrictors may have influenced the results.[25]

Furthermore, the toxic effects of articaine and lidocaine injections on mental nerves of rats were histologically analysed. The rats were injected with the agents and subsequently the inflammatory reactions were compared. The results revealed that the group injected with articaine displayed comparable inflammatory intensity to lidocaine, thus the authors concluded that articaine does not possess an increased neurotoxicity.[26]

In a recent in vitro study, human neuroblastoma cells were exposed to differing LA agents for 20 minutes. [27]  The neurotoxicity of the agents was assessed using assays to examine the cell metabolism activity and viability. The results for the agents were compared, presenting that lidocaine possessed an increased neurotoxicity compared to articaine. This further continues to blur the causal relationship between the use of articaine in IANBs and paraesthesia.

The use of articaine for blocking continues to be a controversially debated topic with continually contradicting notions being published. Studies have struggled to provide scientific evidence, but rather relied upon expert advice and anecdotal reports. Nevertheless, many retrospective studies display an increased incidence of nerve injuries associated with the use of articaine for IANBs. This occurrence is extremely rare, however when present can produce a grave consequence which significantly impacts a patient’s quality of life. Therefore, to ensure patients are protected when administering LA, it is imperative to implement risk assessment and evaluate alternative options. Many experts recommend that dentists adopt infiltration analgesia with high concentration agents as a preventative measure.[28] This review suggests that further research is necessary to elucidate articaine’s neurotoxicity and association with paraesthesia.

[17] Gaffen A S, Haas D A. Retrospective review of voluntary reports of nonsurgical paresthesia in dentistry. J Can Dent Assoc 2009; 75: 579.