When a pathogen enters the body, the person becomes infected.

Pathogens are a kind of parasite that survives by the energy they use from the host body. In this case, some pathogens have the ability to produce a poison that, if released, can damage your body. Therefore what is a pathogen?

Pathogens include bacteria, viruses, proteases and fungi. The larger pathogens like worms, which include smooth worms and roundworms. 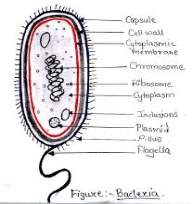 There are four primary stages in bacterial infections: 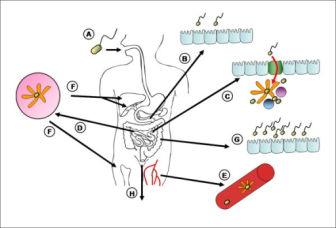 The diagrams show a bacteria structure and also possible sites of infection.

Thee most common type is campylobacter and also most common cause of food poisoning in the UK. Infection is commonly caused by chicken poultry consumption. Non-pasteurized milk is a common contamination to the birds’ feces. 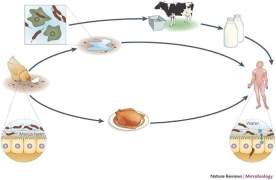 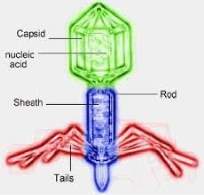 Viruses simply do not cause these simple disease, but also aids to AIDS, Ebola, hepatitis and herpes. The diagram shows a bacteriophage a type of viruses. What causes these viruses to be so dangerous and the human immune system sometimes fights against it?

The virus consists of the following parts: 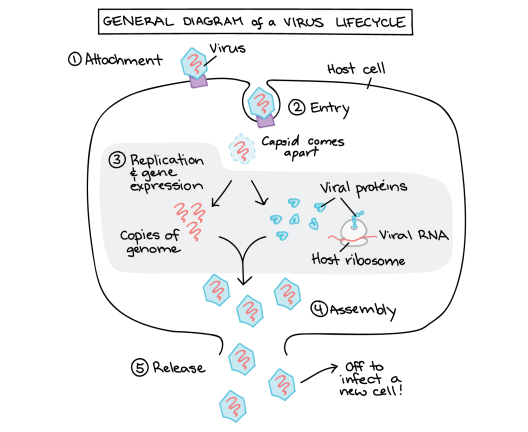 Rotavirus causes severe diarrhea in children and infants, and can be transmitted rapidly through contact with child and infant formulas. 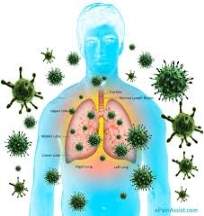 SARS, or acute respiratory syndrome is transmitted through respiratory droplets (see diagram) during coughing or sneezing, contaminated droplets infect the person with his or her eyes and nose, even by touching objects infected with sneezing and contacting the object or hand to the mouth.

These viruses can also be spread through contaminated objects, such as doorknobs, tabletops, and personal items. If you touch one of these objects and then touch your nose or eyes, you could develop a disease. 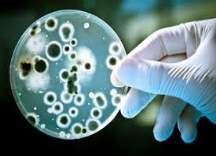 Pathogenic fungi are fungi that cause disease in humans or other organism. The majority are yeasts and cause infections such as (candida species) vaginitis/thrush, (tinea species) ringworm, (pneumocystis species) pneumonia (plate show growth of fungi). Fungi can infect any part of the human body including hair and nail.

Vectors are living creatures that cause infectious diseases and transmission to humans and animals, one of the most famous of which is mosquitoes. Other includes flies, ticks, triatomine Bugs, sandflies and some freshwater aquatic snails. 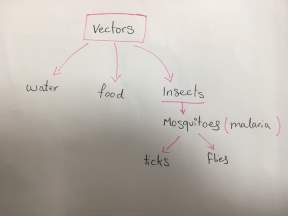 Anterior mouths and longitudinal digestive tracts. They have a fluid-filled cavity within their body that makes the hydrostatic skeleton rigidity. The reason for the curves is to move them forward in the longitudinal direction. Adult worms form separate sexes with different reproductive systems. 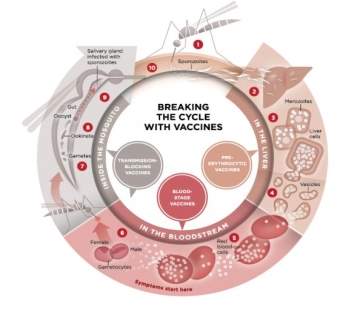 Some mosquitoes are vectors for disease. (The diagram opposite shows the life cycle of a mosquito). This means they can transmit disease from one human or animal to another one of them is Malaria parasites are present in both female Anophelesmosquitoes and human Anopheles mosquitoes. The genetic complexity and size can be so much that the introduction of an infection into the body enters thousands of antigens into the body.

The parasite has changed during these few lifetimes, even in the host of the human body, and at these different stages, presents various antigens that can cause mistakes, misdirect, and hiding in the immune system. 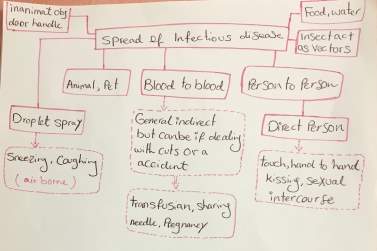 Diagram shows how disease can spread:

The diagram show how disease enter the body: 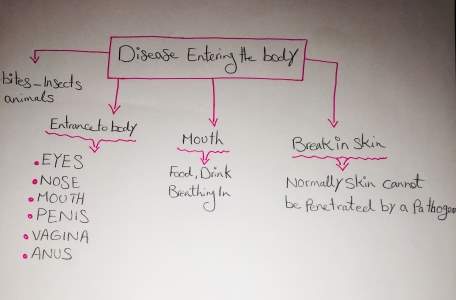 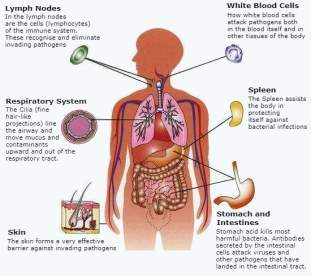 The human body has many mechanisms that indirectly protect the body. (The diagram shows the main nonspecific defences of the body). The main goal of this mechanism is the development of microorganisms to build the foundation and eliminate them through penetration into the deep tissues of the body.

The chemical protection that the body produces also has glands in the body.

These are a nonspecific sign for any damage to tissues that show swelling, redness, heat and pain. The inflammation induced the body’s immune system to go to the damaged site to recover and remove microorganisms.

Cytokines caused by nerve stimulation and chemicals cause inflammation to be controlled.

In some types of inflammation phagocytes are stored in bacteria and white masses in the form of pellets.

Fever is an undeniable mechanism of defense because it may exist on both sides. Therefore, using a suspended substance, the name of the pyrogenic can be affected by mucosal hypothalamus. However, it can be too dangerous and, on the contrary, it can be positive, because it reduces the growth of heat-sensitive microorganisms.

It is important we protect ourselves from infection where possible, as our bodies can do not everything by itself.

Good hygiene is essential in protecting yourself from infection.

There is also preventative equipment can help against infection such as:

Also equipment that prevent the transmission of disease include:

Hygiene and cleaning the house are likely to reduce microbial growth. Health care should be part of life and be targeted on a regular basis. Some of the things that you need to do in general cleaning the house to prevent bacteria include: 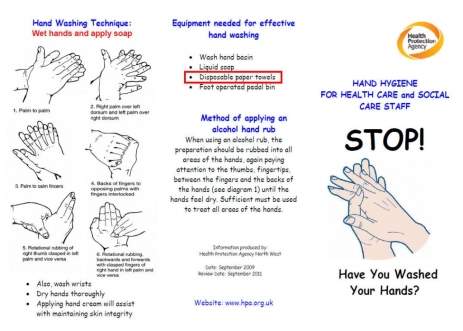 Cleaning toilet, showers/bath regularly. Food hygiene is essential for personal safety of yourself and others. Also include personal protective equipment used in hospital i.e. (PPE), masks, gloves, goggles, and gowns. 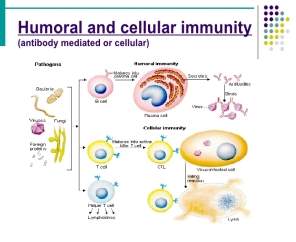 Humoral immunity is a special type of proprietary defense (adaptive immune system) that acts independently as specific microscopic molecules. This type of immune system is named because of its nature, which is carried out through body fluid, humoral immunity, or body fluid immunity. This system, which id found in most vertebrates, consists of molecular and cellular components that play a role in the immune process and more specifically deal with the dangers.

Lymphocytes B, when they first bind to an antigen, grow, divide, and change into plasmocytes and B cells of memory. Plasmocytes secrete proteins called antibodies that are soluble in blood. Body protection against viruses, bacterial toxins and bacteria that spontaneously circulate in the fluid to be transmitted to the cell. It also causes specific reactions to transplanted tissues. 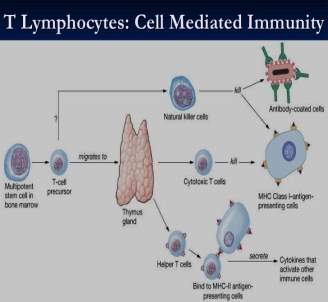 Different parts of the lymphocyte, called T, identify antigens that are outside the cell surface, tissues, and organisms.

T cells regulate the function and proliferation of other cells in the immune system like (Helper T cells, cytotoxic T cells).

B cells including: neutrophils, macrophages.

Antigen: often they are large polysaccharides or protein from a foreign organism. 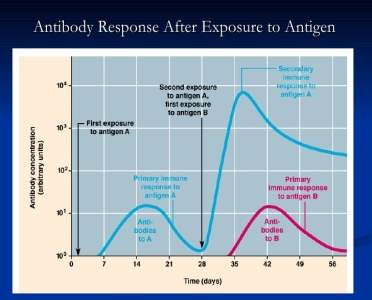 Antibody: the amount of antibody in the serum

For example, the cell wall does not exist in human cells, antibiotic penicillin works by maintaining a bacterium in the cell wall. Human cells and bacteria are also different from the ones that are used to make proteins or DNA. Some antibiotics repel the bacterial membrane.

Antiviral drugs are class of medications that are specifically used to treat infectious viruses. Unlike many antibiotics, anti-viral drugs do not destroy their target. But to curb their growth. The main task of dealing with them is the body’s defense system, and its success and failure determine the strength of this defense system.

When the viruses enter, the human body is defending itself and in most cases it can defeat them. Drugs for the treatment of viral diseases do not eliminate viruses, compared to the effects of antibiotics in bacteria, but they are growing and giving them the opportunity to defeat the virus.

Antifungal The effectiveness of drugs together, destroying fungal cells – for example, removes the contents of fungal cells and cells from the cell’s wall, preventing the growth and proliferation of fungal cells.

Anthelmintic Most medications used to treat worm infections cause starving, paralyzing and worms. For example, mandendazole, albendazole and tibundazole work by preventing the absorption of carbohydrates by sugars necessary to survive. They can only kill worms, not eggs.

Antimicrobial resistance To treat the infection, it can be used to resist microorganisms (including fungi, bacteria, parasites and viruses).

When microorganisms are resistant to antibacterial, antifungal, and antiviral drugs, other standard drugs do not work, and the infection remains in the body and can be easily transmitted. Antibiotic resistance factors: self-medication, abuse, and antibiotic use.

The main function of plasmids is the transfer of antibiotic-resistant genes and they carry other plasmids that are active in metabolic activities and are useful for digestion and elimination of environmental contamination. They also have the ability to produce antibacterial proteins. Plasmids are also capable of carrying genes that increase the pathogenesis of bacteria causing diseases such as semen and chest. 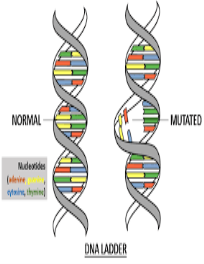 Mutations can occur once in a person’s lifetime, and only in certain cells, not in each cell of the body. The reason for these changes can be caused by environmental factors such as UV, or it can happen when the DNA copies itself as a bug during cell division. When a protein mutation plays a vital role in the body, it can disrupt normal growth or create a medical condition. … It is important to note that the genes themselves do not cause genetic disorders of the disease, but they are caused by mutations caused by inappropriate gene activity.