Why should we monitor high blood pressure?

Blood pressure is the measure of the force the heart uses to pump blood through the arteries. NHS Choices. (21/07/2014). These arteries manage the flow of the blood by controlling its speed and direction. Blood pressure depends two things; how forcefully the heart pumps the blood and how narrow or relaxed the arteries are. Gill. S, Kristensen. SD. (08/02/2011).

High blood pressure is caused when blood is forced through the arteries at an increased pressure. Artery walls have tiny muscles which allow them to become narrower or wider. The narrower the arteries the less space there is for the blood to flow and the harder the heart will have to work. The muscles in the artery wall react to the flow of blood by working harder, which makes them grow bigger. The wall then becomes thicker reducing the space for the blood to flow through. When the heart has to pump harder to push the blood through narrowed arteries the blood pressure rises. If an artery becomes blocked or bursts, the part of the body that the blood was going to will be deprived of energy and oxygen and will be damaged or die. In this instance the pressure of the blood causes the damage. Fullick. A (2008).

Arteries can become damaged in other ways. They can become hardened (atherosclerosis) as a result of fat, cholesterol and other substances building up in the walls of the arteries. Hence life style can be a major contributor in high blood pressure. If an individual is overweight, smokes, eats too much salt, doesn’t exercise enough and, or consumes too much alcohol they will be susceptible to high blood pressure. In addition, if a person has relatives with high blood pressure, has a history of cardiovascular disease, or is of African or Caribbean descent they are more prone to it. Finally, as a person gets older so does their chance of getting high blood pressure, as the blood vessels become stiffer and less flexible. NHS Choices. (04/07/2014).

Having continued high blood pressure (also known as hypertension) increases a persons risk of many serious illnesses, for example; cardiovascular disease, stroke, embolism, aneurysm and kidney disease, to name a few. Approximately one in five people in the UK suffer from hypertension. Gill. S, Kristensen. SD. (08/02/2011). However many of these aren’t aware, as there are not always obvious symptoms. For this reason it is sometimes known as the silent killer. NHS Choices. (04/07/2014). In some instances, with continued levels of very high blood pressure, individuals may display persistent headaches, blurred or double vision, nosebleeds and shortness of breath. The only way to know if a person has a problem with their blood pressure is to get it measured. The NHS recommend that every adult 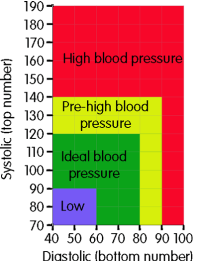 The chart opposite shows the different levels of blood pressure and at what point they are considered low, normal and high. This chart is suitable for adults of any age as, although a persons blood pressure might change with age, the levels at which the pressure is considered high, normal or low do not. Blood Pressure Association . (2008).

Pickering found that 21% of 292 patients with borderline high blood pressure actually had normal daytime readings. These patients were defined as having “white coat” hypertension, and they were more likely to be female, younger and to weigh less. Pickering. TG et al (1988). Staessen undertook a similar study and found that more patients measured by ABPM stopped treatment than those measured in a medical setting. Staessen. JA et al (1997). Therefore the benefits to large portions of society who might be able to stop taking drugs as a result of mis-diagnosis could be quite substantial.

ABPM is, however, expensive. In 2011 NICE released the findings of a study that found that although it was the most accurate method of diagnosing hypertension, it was also the most expensive. However, the savings made as a result of reduced cost of drugs and GP visits meant that it was still the most cost effective means of measuring and confirming diagnosis. McManus. R et al (2011). Staessen also found that drug intervention could be reduced and that blood pressure and overall general health was improved as a result of treatment based on ABPM reading. Staessen. JA et al (1997). Therefore the social and economic benefits of ABPM would appear to be wholly worth the cost.

Surprisingly, Law, Wald and Morris suggest that changes in diet and lifestyle have only a limited effect in reducing average blood pressure, although they do acknowledge that a major reduction in the salt content of manufactured foods by the food industry would have an impact. They argue that blood pressure lowering drugs are the only way to ensure substantial reductions in blood pressure. As such they suggest that blood pressure reducing drugs should be given to all those identified as susceptible to heart disease or stroke, including those over a certain age, regardless of the level of their blood pressure.

The impartiality of Law, Wald and Morris findings are questionable as they see medication as the only way forward. It is not clear if their research is funded by a pharmaceutical company and care would need to be taken when relying upon their findings. They give no credence to the social benefits of life style changes, for example general well being from a reduced diet or alcohol intake, as well as the benefits brought about from the socialising aspect of exercise. Their recommendations also take no account of the reluctance of otherwise healthy individuals to a lifetime of drug taking. As highlighted by Honigsbaum, Honigsbaum. M.. (2012). who, at the age of 47, living a healthy life style, rejected the notion of having to take pills for the rest of his life. Honigsbaum is an example of those in Law’s study, whose life style did not suggest a problem with high blood pressure but whom had a genetic pre disposition to the condition.

In conclusion, it would appear that there is consensus of agreement that high blood pressure is a major world health problem and that monitoring is essential. However, there is still a lot to be done in terms of education about lifestyle and adoption of values that underpin this, for example encouragement of healthier lifestyles and for the food industry to take take responsibility for a reduction in salt in manufactured foods. There is further a growing body of agreement that ambulatory blood pressure monitoring is the most effective in terms of diagnosis and as such the higher costs are justified. In addition, questions remain regarding how to identify those with pre existing or inherent predisposition to cardiovascular disease who may not have high blood pressure.