Alzheimer’s disease is chronic neurodegenerative disease which has a slow development which worsens over a period of time (‘Alzheimer’s Disease’ 2009). This disease is commonly linked with the overabundance of aggregated amyloid-beta (Aβ) peptide within the cerebral cortex and hippocampus (Doody et al. 2014). Solanezumab an Alzheimer’s drug is a monoclonal IgG1 antibody which is used against the mid-domain of the Aβ peptide (Alzforum.org 2015). This paper will cover aspects of this drug such as its development, chemical structure and mechanism of action and looking at issues the drug had during its development, regulatory approval and its post market surveillance.

The development of this type of antibody is different from other monoclonal antibodies which are being tested currently. Comparing it to that of another drug called bapineuzumab, which binds to the N-terminal, Solanezumab was created to bind to the soluble Aβ peptide because it was predicted to it being far more effective than binding to the N-terminal portion of a molecule (Imbimbo et al. 2012). In the In Vitro studies which were undertaken for this drug, the parent’s antibody m266 which binds to the Aβ had been tested in a dialysis system involving the antibody solution in the bottom chamber which was divided by a dialysis membrane from the top chamber which had the human CSF. It was seen that a great amount of CSF Aβ was sequestered when the bottom chamber had PBS plus m266 at 48.91% as compared to PBS with a nonspecific mouse IgG being at 2.18% (Imbimbo et al. 2012). The result demonstrated in relation to Aβ binding that m266 was not able to bind to Aβ deposited in parenchyma and cerebral vessels (Imbimbo et al. 2012 cited from [49]).

Class of drug and Mechanism of action

Solanezumab as defined by the WHO’s International Nonproprietary Names for Pharmaceutical Substances (INN) is an neuroprotectant (WHO 2007). Neuroprotection as dictated by Rafi and Aisen (2009) is the mechanism by which neurons are protected from degeneration; their use can be seen in patients who have suffered recent ischemic injury or a result from neurodegenerative diseases.

It is seen that solanezumab’s mechanism of action is different to that of other passive immunotherapies. This is due to it targeting the central domain of Aβ peptide, which has been proposed as more effective in clearing N-terminal truncated or modified forms of Aβ peptide (Siemers et al. 2010). This has separated this drug from others such as bapinezumab which targets the N-terminal of the molecule exclusively (Samadi and Sultzer 2011).

In the murine model, the M266 antibodies are seen to enter the cerebral spinal fluid at a concentration of 0.1% compared that that of in plasma, as with patients with AD, a single injection intravenously of the dose of .5, 1.5, 4 and 10 mg/kg resulted in the maximum plasma concentration for solanezumab (Bruno P Imbimbo, et al. 2012). Furthermore the mean total half-life of the drug was found to be 334 hours (14 days) after an injection of .5mg and 631 to 709 hours (26 to 30 days) when injected with 1.5, 4, or 10 mg which indicated that the lowest dose half-life compared to that of the high doses was most likely due to the drug concentrations falling below quantification limits, thus possibly preventing complete characterization of the terminal elimination phase for the dose given (Imbimbo et al. 2012 cited from Siemers et al. 2010).

Solanezumab is a humanized IgG1 derivative of the m266 Aβ monoclonal antibody of a mouse in which binds to the central region of the human Aβ peptide (Stefan Dübel 2014). This antibody was produced inside A/J mice using a synthetic Aβ peptide conjugated with an anti –CD3 immunoglobin (Bruno P Imbimbo, et al. 2012). (Expand a bit more here) 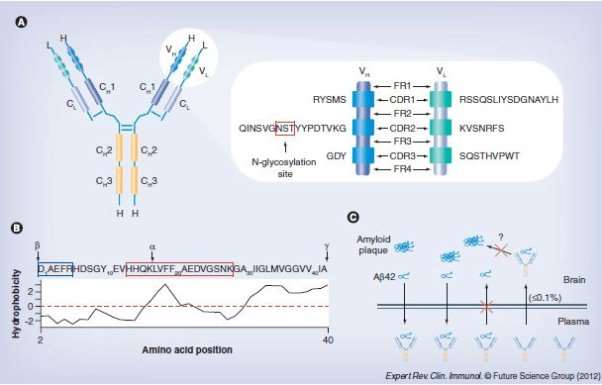 Currently 9 studies have carried out concerning the Solanezumab drug, 5 of which have been completed and the other 4 which are recruiting or currently active in their research (ClinicalTrials.gov 2015). The most well regarded and referenced is the Phase 3 Trials which were carried out by Eli Lilly in 2014 which looked at using Solanezumab for mild to moderate Alzheimer’s disease.

In in murine model of the preclinical trials for the drug were tested for their safety and effectiveness. It was seen that the mice treated with the murine version of solanezumab called m266.2 were at risk to develop cerebral microhemorrhaging as compared to mice treated with 3D6 which the bapinezumab model for mice (Samadi, seltzer 2011 cited from [50]). The reasoning for this result was predicted to be that of the different binding paths of the drugs where solanezumab binds to the Aβ peptide exclusively as bapinezumab binds to both Aβ plaque and the n-terminal of the Aβ peptide (Samadi, seltzer 2011 cited from [43]).

Phase I studies showed that when 19 test subjects were subjected to a single dose of solanezumab containing either .5,1.5,4.0 or 10 mg/kg that serious adverse side effects occurred in 4 , 1 in which had a placebo (add in results for this phase 1)( Samadi , Sultzer 2011). The events that occurred was syncope, fatigue and vertigo occurring from the does size given, although it was noted that these effects were not fault of the drug given (Imbimbo et al. 2012 cited [55]). The results of the study had shown that there altogether no changes in the cognitive scores which would indicate that the drug did not provide any benefit.

In the phase II study was conducted looking at the drug being given over a period of 12 weeks.

The various issues that occurred in these studies was that 8 patients had suffered from serious adverse side effects from the drug, these included cardiac, neurological and even gastrointestinal issues (Farlow et al. 2012). The table Figure (1) gives a summary to the adverse events that occurred between the placebo and varying dosage groups of the patients receiving the drug. (expand) 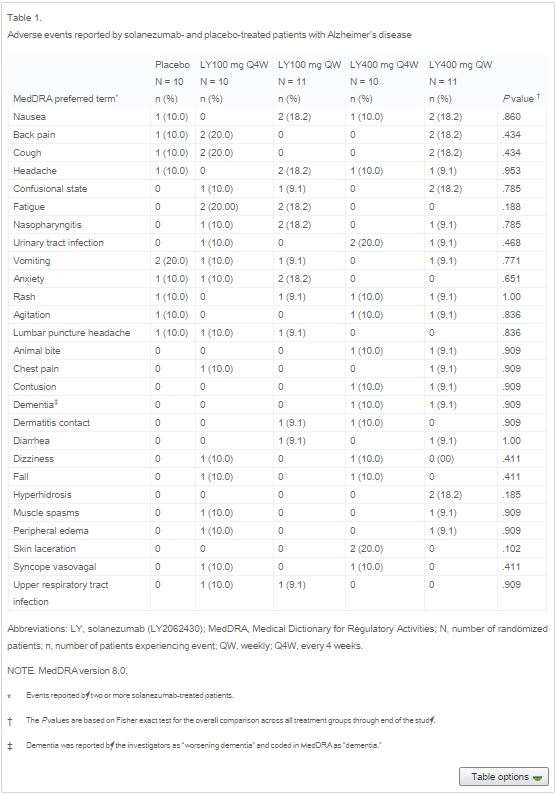 When looking at the cognitive measurements in the patients to assess their cognitive abilities, the results showed that between the drug and the placebo, no important differences were seen on the 11 item or 14 item scores. Table figure (3) demonstrates these results showing these differences. This table can then indicate that there was no suggestion that any significant clinical benefit occurred. 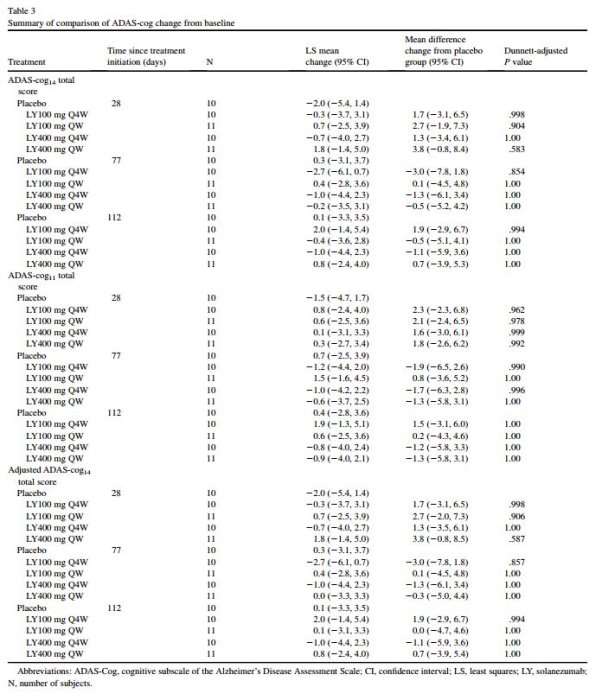 The Phase III trials which involved 2 double blind trials which the patients were treated with either the drug or the placebo given periodically over a period of 18 months. The outcomes were measured using the 11 item and 14 items cognitive scores to which the previous phase studies had used.

The adverse events that occurred during this trial were that cardiac arrhythmia occurred in 5% of patients who received the drug and 3.7% in the placebo (Doody et al. 2014). As well as the cardiac issues, 33 deaths had occurred, 24 in which were in the group who received Solanezumab

In the discussion section of the studies they mention that from both the studies that were undertaken, none of them had shown any benefit that Solanezumab and the current studies have failed to show treatment effects on the hippocampal , total brain volume or the amyloid accumulation (Doody et al. 2014). Doody et al. (2014) goes on to mention that although the study did not show the efficacy of the drug being tested that further studies into the drug will be required to assess the particular approach they’ve taken.

It can be seen a major issue concerning all the studies which were carried out is the lack of efficacy. As can be seen for all the results for the phase studies that all of them showed no significant improvement when it was concerning the 11 item and 14 item scores for the patients.

Solanezumab has also proven to provide a poor efficacy for the patients in which has taken it. The phase studies in which have been reported demonstrate this result occurring which can give evidence toward this particular monoclonal antibody to be ineffective as slowing the progression of Alzheimer’s. Although there was seen adverse side effects in the studies which may call for concern , it has been properly ruled out that the issues were not related to the drug as can be seen in the table results when comparing the control to the drug groups. To summarise solanezumab is not created the same as compared to other monoclonal antibodies, when discussing their binding site on the Aβ peptide, although this drug has proven to have a poor efficacy, it has shown that it causes minimal adverse side effects in comparison to other monoclonal antibodies currently being tested. If more study was to be taken place into altering the drug, in attempt to improve efficacy whilst minimising the adverse effects, it may come into market someday to help people.