Aim: The purpose of this study is to investigate the changes in the levels of lactate dehydogenase enzyme(LDH) activity and efficacy of combination of paclitaxel along with Withnia Sominiferia against breast cancer in experimental animals. Breast cancer is the commonest cancer among women in all developed countries (except Japan) as well as in North Africa, South America, and southeastern and western Asia. While the incidence of breast cancer appears to be increasing, mortality rates are now declining in at least some western countries. Breast cancer ranks third when both the sexes are considered together and is clearly a significant global public health problem. Design/Methods: Breast cancer was induced in rats by 7, 12 Di methyl benz(a) anthracene (DMBA) at the dosage of 20mgs dissolved in 0.5ml sunflower oil and administered into experimental animals for 28 weeks. In this study, we demonstrated that combination of paclitaxel and withania somnifera revert the changes in the rats from lethal dose of DMBA within 30 days. Results: All the isoenzymes LDH1 – LDH5 were observed in cancer bearing animals. Expression of these isoenzymes were found be reduced in paclitaxel and Withania somnifera treated animals. Conclusions: The treatment with combination of paclitaxel and withania somnifera effectively reduced LDH enzyme activity levels. So, from the obtained results it is concluded that paclitaxel and withania somnifera is capable of restoring the breast architecture.

Breast cancer ranks third when both the sexes are considered together (Parkin, 1999) and is clearly a significant global public health problem.

There are nearly 8,00,000 new cases of breast cancer worldwide each year .In approximately half of these patients, breast cancer will be the eventual cause of death. Incidence of breast cancer in Indian women is not as high as in western countries (Sinha et al., 2003) .It is the second most common cancer among women in south India. The age standardized rates vary from 22 to 28 per 1, 00,000 women (Sanghvi, 1998). Although the rates appear to be lower than those seen in developed countries, the burden of cancer in India is alarming.

Worldwide incidences of breast cancer continue to rise and geographical variations in breast cancer incidence indicate that environment factors contribute to overall risk (Millikan, 1995). Exposure to environmental carcinogens early in life is thought to be one of the first events in the development of breast cancer. Each year breast cancer is diagnosed in 910,000 women worldwide and 376,000 women die from the disease. Most of these cases are in industrial countries e.g., North America (180,000) and Europe (220,000).

PAH’s an important class of chemical carcinogens that are widespread in the ambient environment due to fossil fuel combustion for energy production, transportation and industry. DMBA, a potent PAH recognized as an initiator of both skin and liver cancer (Masaaki Miyata et al). The covalent binding of DMBA metabolites to DNA has been implicated as a critical step in the initiation phase of cancers.

Paclitaxel (Taxol), a naturally occurring antineoplastic agent has shown great promise in the therapeutic management of certain human solid tumors particularly in metastatic breast cancer and malignancy involves skin, lung and refractory ovaries. It is the original member of the taxane group of anticancer drugs derived from the bark and needles of the pacific yew tree “Taxus brevifolia”. Paclitaxel’s antitumor activity was discovered in1960’s during a large scale 35,000 plants-screening program sponsored by the National Cancer Institute (NCI), USA.

Withania is widely used in Ayurvedic medicine in India and in Unani and Middle Eastern traditional medicines, where it is highly regarded as a panacea, aphrodisiac, and rejuvenative. Withania sominifera (L). Dunal (Solanaceae) commonly called Ashwagandha (Sanskrit) is an Ayurvedic Indian medicinal plant, which has been widely used as a home remedy for several ailments.(Bhattacharya et al., 1997)

The use of ashwagandha in Ayurvedic medicine extends back more than 3000 to 4000 years (Upton, 2000) (Agarwall et al., 1997). It has been widely extolled as a tonic, especially for emaciation in people of all ages, including babies, and enhances the reproductive function of both men and women. It has also been used for inflammation, especially in antitumor, arthritic and rheumatic conditions, for asthma, and as a major tonic to counteract aging and promote youthful longevity (Dhuley., 1998).

7,12 Dimethyl benz (a) anthracene and Withania somnifera were purchased from Sigma chemical company, USA. All the other chemicals used were of analytical grade.

After the experimental period of 32 weeks, the animals were sacrificed by cervical decapitation.

The isoenzymes pattern of lactate dehydrogenase was separated by the method of Dietz and Lubrano (1967).

Plate 1 depicts the Isoenzyme pattern of lactate dehydrogenase in serum of control and experimental animals. All the isoenzymes LDH1 – LDH5 were observed in cancer bearing (group II) animals. Expression of these isoenzymes were found be reduced in paclitaxel (group III) and Withania somnifera (group IV) treated animals. However a much significant reduction in the LDH isoenzyme expression pattern was observed in-group V animals treated with both paclitaxel and Withania somnifera. 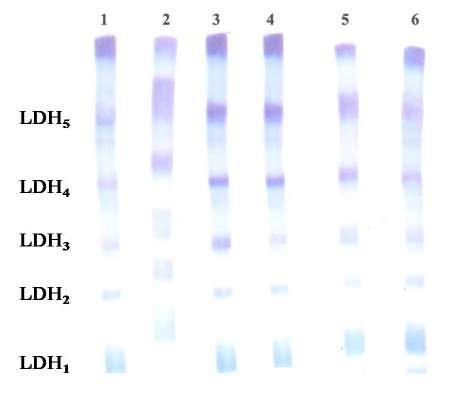 Lactate dehydrogenase (LDH) is the most common clinical enzyme used in the cancer patients for prognostic purpose ( Invone et al., 1998). It has an important role in germ cell functions and can predict responses to chemotherapy and the prospects of remission. Human cancer tissues typically exhibit 2-3 fold increases in glycolytic enzymes and LDH activity. Sandhya Mishra et al. (2004) have also reported the increased level of LDH in breast cancer patients.

Anderson and Kovatik (1981) reported greater LDH activity in breast cancer conditions. There was a significant increase in LDH level in serum of cancer bearing Group II animals. This might be due to the membrane disruptions that caused the release of these enzymes from the cancer cells or the overproduction by the tumor cells (Helmes et al., 1998). The elevated LDH activity may also have resulted from differences in the rate of synthesis, degradation or the excretion of the enzymes in the mammary cancer bearing animals. Schwartz (1973) has reported that among the isoenzymes LDH5 was six times greater than LDH1 in mammary tumor cells.

Flavanoids have proved to possess antitumor effect on various animal models (Ames et al., 1995). The biological and pharmacological activity of Withania somnifera was associated with phenolic compounds mainly to flavanoids, aromatic acids and esters (Burdock, 1998; De catsro, 2001). Antioxidant activity of flavanoids may also be due to their structural features and its action on membrane (Saija et al., 1995; Mathur et al., 2003 ; Mohan et al., 2006). Paclitaxel being rich in flavanoid content possess antitumor and antiproliferative activities that stabilizes the membrane permeability and reduces the release of LDH.

For statistical analysis, one way analysis of analysis of Variance (ANOVA) was used, followed by the Newman-Keuls Multiple Comparison test.

From the present study, the effect of Paclitaxel- Withania somnifera combination proved to be effective chemotherapeutic agent against DMBA induced Breast cancer in wistar rats compared to that of paclitaxel or Withania somnifera confirmed analyzing the LDH isoenzymes levels in serum.

Sandhya Mishra DC, Sharma and Praveen Sharma. (2004). Studies of Biochemical parameters in breast cancer with and without metastasis. Indian Journal of Clinical Biochemistry. 19(1) : 71 – 75.

Abstract The mammography screening recommendations have been ambiguous and disagree with suggesting institute to institute.  Thus, it is up to women to make choices about mammogram inspection bas...

The Breast Screening Programme In The Uk Health Essay

Breast cancer is the most common cancer in women in the UK and is currently the second leading cause of cancer deaths after lung cancer1. In 1988, the National Health Service Breast Screening Programm...

Young women diagnosed with breast cancer have very specific future concerns, from coping with the physical changes and emotional anxieties to dating and the possibility of having children. ...