EVD is a hemorrhagic illness having a severe fatality rate of 90% that has caused an epidemic in West Africa in the year 2014 (World Health Organization, 2014). This is considered to be the most deadly and the first to occur in West Africa and in its history. (Weekly Epidemiological Report, 2014). As mentioned above, the first outbreak of the virus took place in Central Africa; it consisted of nearly 5,000 cases up to date (World Health Organization, 2014). According to study conducted by Lamantagne et al (2014), states that that 30,000 individuals have been reported dead in the month of September 2014 itself. He also provokes that this has brought an urgency to bring the epidemic situation to a control.

No current attacks in Sri Lanka with respect to Ebola have arose; however, Dr. P.G. Mahipala says that screening facilities have been attempted to monitor Sri Lankans and outsiders in the Katunayaka International Airport (Colombo page, 2014).

Ebola is a zoonotic disease caused by a viral pathogen that causes lethal hemorrhagic fever syndrome in humans (Sullivan, Yang andNabel, 2003). This disease is known to be caused by a RNA containing virus that belongs to the family of Filoviridae and genus of Ebola virus (Chowell and Nishiura, 2014). Ebola viral disease (EVD) is also known as Ebola hemorrhagic fever, which was first, discovered in 1976 near the Ebola River in the Central Africa, of the Democratic Republic of Congo (DRC), which was formerly known as Zaire (Draper, 2002). However, it was reported to have an outbreak of 284 people being infected with the disease having mortality rate of 53% that lasted for 27 years (Sullivan, Yang andNabel, 2003; Waterman, 1999). Furthermore, the second attack of Ebola emerged from Yambuka that was caused by one of the strains of Ebola virus known to be the Zaire Ebola virus (EBOZ) that had the highest mortality rate of 88% (Waterman, 1999) where 7 people were dead among 31 casualties (Centers for Disease Control and Prevention, 2014). Tremendous research have been studied but never succeeded in finding the natural reservoir of the virus (Waterman, 1999). However, it is now concluded that since EVD is zoonotic disease, it is spread by Rousettus aegyptiacus of the fruit bat species of the sub-Saharan region and central African region. Figure 1 illustrates the historical outbreak of the virus (Feldmann, 2014) 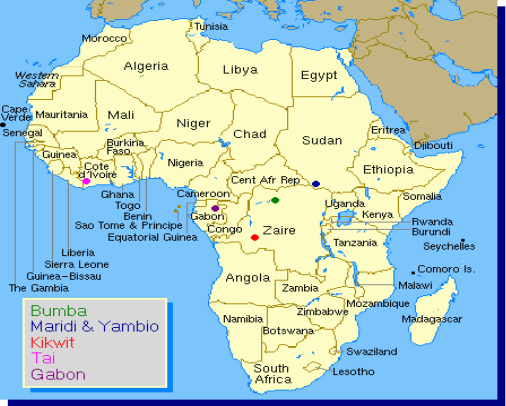 Filoviridae viruses are usually found in green monkeys imported from Africa (Peters and Leduc, 1999). The first significant outbreak of Ebola occurred in Sudan that killed infected human and non-human primates (World Health Organization, 2014). However, the evolutionary history of Ebola remains unclear (Li and Chen, 2013). In 1989, Ebola appeared in monkey imported to Reston, Virginia, primate facility of Washington, DC (peters and peters, 1999). In addition, it has been reported that small subclinical outbreaks in the United States and Philippines had spread but were not so lethal for humans (CDC, 2003, sited in Casilas et al, 2003).

Ebola usually has a fatality rate that often exceeds 80% (Geisbert et al, 2008). Although the clinical course is well known, the specific mechanisms underlying the pathogenicity of Ebola virus is not clearly known (Sullivan, Yang and Nabel, 2003). People are infected through the use of unsterilized needles and syringes (Peters and Peters, 1999).

EBOV are non-segmented, negative strand RNA viruses which constitute to the family Filoviridae (Stimola, 2011; Kim, 1999). The viral multiplies as a result of the genome coding capacity that produces a number of transcripts encoding for structural and non-structural glycoproteins (Mehedi, 2013).

Ebola genome consists of seven genes where Viral Protein 40 (VP40) is expressed the most abundantly (Gyamfi et al, 2013). VP40 usually assembles on the inner leaflet of the plasma membrane, however the mechanistic details of plasma membrane by VP40 is not yet clearly known (Gyamfi et al, 2013). Hence, this is achieved by RNA editing, where non-template adenosine residues are in co-operated into the mRNA of EBOV at an editing site encoding for seven adenosine residues (Mehedi, 2013).

Ebola enters the human cell by using one of the seven surface proteins available on the membrane, to trick the cell into thinking that the virus is not pathogenic thereby making the immune response inactive (Stimola,2011). Figure 2 illustrates an Electron Micrograph of Ebola virus

The virion containing RNA is a negative sense strand (complementary to RNA), therefore it is copied into a complementary plus-strand for protein formation to proceed for pathogenesis (Hunt, 2010).Virology studies have found very few about the EBOV as it contains genes less than a dozen when compared to other viruses like poxviruses and herpes viruses (Peters and Peters, 1999). The transmission of the virus usually takes place through broken skin or mucous membranes, with blood, secretions such as semen or any other body fluids such as breast milk of infected people (WHO, 2014).

As the virus enters the body, cytokines are released when reticuloendothelial cells encounter the virus which contributes to inflammatory responses that can be violent. (Sullivan, Yang and Nabel, 2003). Stimola (2011) explains that lungs are filled in blood that causes individuals to cough out blood. Furthermore, she states that bleeding from eyes and skin are also prominent features of the disease. Severe damage to the liver, with the combination of massive viremia, leads to disseminated intravascular coagulopathy and eventually, it infects the micro-vascular endothelial cells and compromises vascular integrity (Sullivan, Yang and Nabel, 2003). Diarrhea and vomiting is due to severe gastrointestinal illness and volume depletion with a series of metabolic disorders occurs, ultimately hypovolemic shock occurs (Lamantagne et al, 2014).

Ebola is a disease that is unable to be distinguished among other diseases such as Malaria, Typhoid Fever and Meningitis (World Health Organization, 2014). This is because Ebola virus replicates at a very high rate which overwhelms the protein synthesis of infected cells and the host immune system (Sullivan, Yang and Nabel, 2003). Patients are diagnosed using various methods such as ELISA (Enzyme-Linked Immunosorbent Assay) technique, PCR (Polymerase Chain Reactions) and various other laboratory tests (Sullivan, Yang and Nabel, 2003). ELISA is sensitive and specific in determination of the viral antigens in serum that screen large numbers of suspect human samples in a short period of time (Peters and Peters, 1999). During infection it is known that both the proteins of host and viral cells contribute to the pathogenesis of Ebola Virus (Sullivan, Yang and Nabel, 2003). Further into the course of the disease or after the patients’ recovery immunoglobulin M and immunoglobulin G can be detected (Turner and Cheryl, 2014). Table 1.1 illustrates the diagnostic methods available.

Detection can also depend on molecular techniques including multiple reverse transcriptase PCR assays. (Feldmann, 2014). Immunohistochemistry, PCR and Isolation of the Virus are also performed (Turner and Cheryl, 2014). Laboratory testing using polymerase chain reaction gives a specific result and this is used widely as a result (Lamontagne, 2014). Antigen detection maybe performed to confirm immediate diagnosis, whereas, assays for detection of anti-bodies are secondary tests that are primarily important (Feldmann, 2014). Samples from patients are extreme biohazard risk in which laboratory testing on non-inactivated samples and should be conducted under maximum protective conditions (World Health Organization, 2014).

Recovery from Ebola depends on good clinical care and the patients’ immune response (CDC, 2014). The Global Health Security Agenda aims to strengthen public health systems that need to eradicate the deadly EVD (Frieden et al, 2014). Standard precautions are used by health care workers by using personal protection equipment to prevent exposure from the infected (Turner and Cheryl, 2014). Effective way to keep away from the Ebola virus is to use Soap, dilute bleach, or any alcohol based hand sanitizers, which readily disrupts the envelope of the single stranded RNA virus (lamantagne et al, 2014).

Three core interventions have stopped every pathogenic disease and the way of transmission. These are exhaustive case and contact tracing, effective response to patients and the community, and preventive interventions (Lamantagne et al, 2014). There is no proven treatment available for Ebola Virus Disease but through supportive care rehydration with oral or intravenous fluids for specific symptoms, improves survival (World Health Organization, 2014). Currently available antiviral medications are not effective (Turner and Cheryl, 2014).

When a person can no longer drink, intravenous medications are given and delivery of appropriate replacement solutions are required but in some cases the victims die due to inadequate intravenous fluid resuscitation (Lamantagne et al,2014). Passive transfer of antibodies in animal models only delayed the onset of symptoms and did not alter overall survival (Sullivan, Yang and Nabel, 2003). The activated allogeneic lymphocytes and the increased number of platelets erythrocytes, and plasma were probably beneficial (Peters and Peters, 1999). People who recover from Ebola develop antibodies that last for at least 10 years (CDC, 2014). Some people who have recovered from the infection of Ebola have developed complications as joint and vision problems which could be there for a long time (CDC, 2014). In Ebola infection the ability of neutralizing antibodies to serve as passive immunotherapies is not well understood (Lee and Saphire, 2014).

Ebola is a viral hemorrhagic zoonotic disease that is caused by the genus Ebola virus that consists of negative sense RNA (Sullivan, Yang andNabel, 2003). This was first discovered in the 1976 in the central Africa of DRC. (Draper, 2002). Since then, there have been many outbreaks that have been identified having a mortality rate of over 90% (World Health Organization, 2014). Ebola is transmitted by the vector Rousettus aegyptiacus (fruit bat) that infects humans and non-human primates through direct contact such as body fluids and physical contact (Feldmann, 2014). Symptoms are usually vomiting, diarrhea that lead to multiple organ failure and hemorrhage (Mayo Clinic, 2014). Therefore adequate diagnosis such as PCR and other various techniques such ELISA are used (Turner and Cheryl, 2014). Simultaneously, treatments are also been done to patients such as vaccination of antibodies and drug therapy.…. And proper sanitary implication that provides a better health system and to reduce the epidemic of Ebola (Stimola, 2011).